The point of this thread is to discuss how the normal waterfowl owner can determine hydration status in their avian patient using the PCV (EVF), and TP test. As with most medical fields keeping the patient hydrated cannot be stressed enough.

While it may be good to immediately administer fluids to sick birds, determining the severity of dehydration is also important as it provides the owner with valuable information pertaining to the route of how the fluids are administered, and how much.

For sick birds here, once they have been stabilized, I tend to start with a thorough basic external examination, checking their mucous membranes (eyes, mouth, tongue) to see if they seem gummy or dry at all, which might point towards severe dehydration. Another basic test to perform is the ‘skin tugor” method which simply consists of tenting the skin on their back, and releasing to see the timing of which retraction takes place on the skin. As shown in the chart below, skin that retracts back to its normal place quickly suggests the bird is maintaining fairly ok, hydration levels. Ones, where the skin doesn’t retract back fast, indicates the bird is likely suffering from dehydration problems. Weighing, the bird to get a baseline weight is usually followed thereafter, being repeated daily to help determine hydration, and weight status.

While all of the tests above of themselves provide great information regarding the bird's hydration levels, I find the best results determining the bird's hydration levels via a (PCV) Packed Cell Volume, and (TP) Total protein assessment. The PCV and TP are simple tests that require only a few supplies including capillary tubes, a microhematocrit centrifuge, a microhematocrit reader, lancets, paper towels, a Refractometer, and sealing clay. The PCV test, or also know as the Erythrocyte Volume Fraction (EVF) test measures the amount of Erythrocyte's, or (RBC's) red blood cells in the patient's blood. Fortunately, when doing the PCV test plasma is also separated, and then present in the sample which can then be used for a (TP) also know as total plasma protein levels. This is why these tests are almost always performed as two( the PCV being done first, and TP second.

To start off a sample of blood needs to be taken from the bird in question. There are two fairly simple ways an owner can do this, preferably with an extra hand to help. Since waterfowl have lots of down locating the vein can sometimes be a challenge, so bringing rubbing alcohol, or just plain water to wet down the feathers provides easier visibility of the veins. 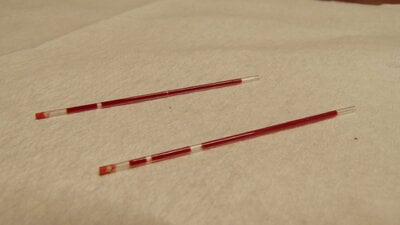 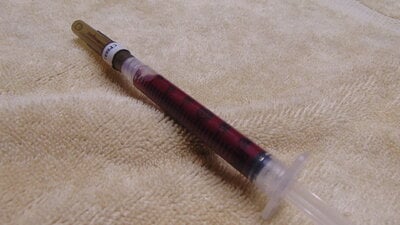 Once you have located the vein, there are two ways to draw the blood. One being venipuncture, the other simply consisting of using a lancet to puncture the vein and holding a capillary tube under the blood flow. The capillary action of the tube will suck the blood into the tube, and you will then have tubes ready for sealing, then centrifugation. If venipuncture is desired, grab the bird, and wrap him/her in a towel, extend one wing out, and using a 22 gauge needle, pull back slightly on the plunger to break the seal, and, insert the needle at an acute angle into the vein. Once the needle has entered the vein, pull back slowly on the plunger until the desired amount (1ml will suffice) has been achieved. Once the desired amount has been reached, pull the needle out, and apply firm pressure to the blood collection site for a minute using a sterilized cotton ball until clotting has occurred. On occasions, the vein may rupture and the injection site may swell with blood, known as a hematoma. As long as the site isn't actively bleeding this won't hurt the bird and is merely a cosmetic effect for a few weeks. The pictures below depict the two methods mentioned above, 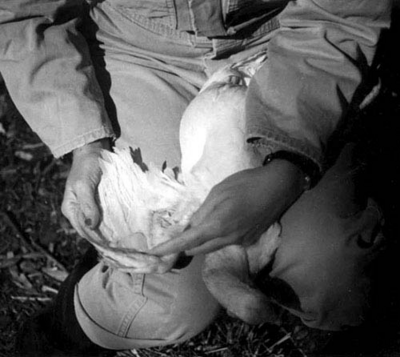 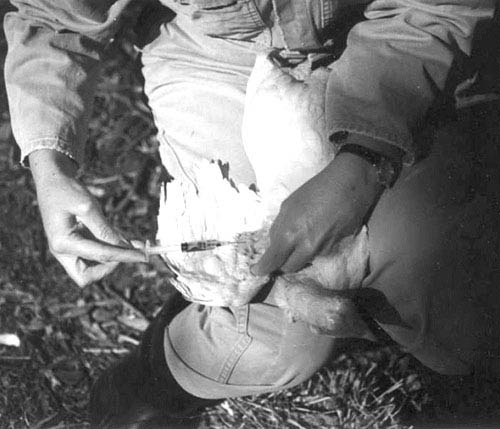 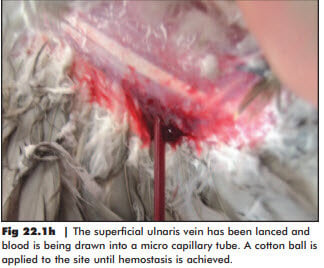 It is important to note, when doing the capillary method, two tubes should be filled, one, so the centrifuge is balanced, and two, because often times there is not enough plasma in one tube to perform the total plasma protein. If the blood was collected into the syringe, immediately transfer the blood over to the capillary tube, by taking the needle off, and dripping the blood out of the syringe, holding the tube underneath until the tubes are nearly ¾ full. Once the blood is in the capillary tube, wipe off any blood on the outside with a towel. Then tilt the tube slightly so there is “air-space” for the sealing clay. Gently, push the bottom of the tube into the clay until sealed, and set in the centrifuge for around three minutes.


Once the contents of the blood are thoroughly separated, plasma being clear on top, and RBC’s on the bottom, the buffy coat being between the two layers. The tube can then be set on the microhematocrit reader for a reading. Line the top of the clay plug with the bottom line, and the top of the plasma with the top of the reader. The number of RBC’s is indicated where the plasma portion meets the RBC’s. In the case below, the PCV was 59%. Which in my experience, is fairly normal. According to several sources online, birds PCV range from 40-60%. A high PCV reading suggests there is a lack of plasma in the sample, which is also the fluid portion of the blood, thus indicating dehydration. Case's where the PCV is low may indicate anemia. 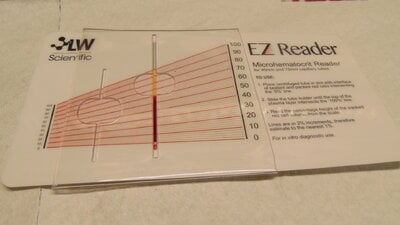 After the PCV test has been completed and recorded you can then move onto the Plasma protein evaluation. In this test, you will be using a refractometer which simply measures the amount of light that refracts off the liquid being measured. Using dog clippers, or your fingers snap the capillary tube in half so the plasma portion is separated. Then gently tap the capillary tube, or gently blow the plasma out of the tube onto the refractometer slide. The plasma in two tubes usually is enough to cover the whole refractometer slide. Close the lid of the refractometer, aim the refractometer into a light source, and look into the eyepiece. Where the blue/white colors meet is where the total is. In the photo below the TP was 5.9%. As with the PCV, a high TP can point towards dehydration. According to this source , "The normal plasma protein range is 3.5–5.5 mg%, with the percentage varying for different species of bird. Smaller birds tend to have values on the low end of the range. Baby birds also tend to have lower protein values than adults, which increase as they mature". 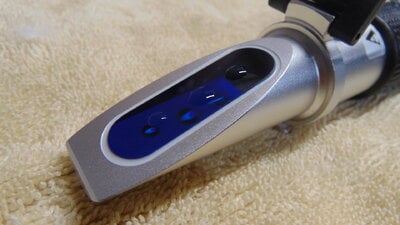 This is a nice thread!

Have you considered making it an Article in the learning center?

ronott1 said:
This is a nice thread!

Have you considered making it an Article in the learning center?
Click to expand...

No, I had not, but thanks for the suggestion.

Not A Care In The World !

Is the normal waterfowl owner going to administer this test themselves or an Avian Vet?

I agree dehydration is a very important part of doctoring a sick and or injured bird back to health. This PCV test looks pretty advanced for the average poultry owner.

Is the normal waterfowl owner going to administer this test themselves or an Avian Vet?

I agree dehydration is a very important part of doctoring a sick and or injured bird back to health. This PCV test looks pretty advanced for the average poultry owner.

For the PCV , the concept of the test itself is fairly straightforward and simple. You take a small fraction of the bird's blood, separate the contents by centrifugal force, and using a microhematocrit reader to measure the contents of the blood which will ultimately prove useful in diagnosing dehydration.

As far as if the "normal bird owner" is going to be able to preform this, I am not a veterinarian, and with some time, and reading on the subject I was able to assemble, and complete the test with accuracy, so maybe not for a very new owner, but for someone who's had birds a few years, it's a fairly simple test, although there is some investment getting all the supplies.
You must log in or register to reply here.
Share:
Reddit Pinterest Tumblr WhatsApp Email Link