Dog fight~ they usually love each other~what can I do to prevent?

our 2 doggies, Chaser (pit bull) and Holly (GSD) got into a sudden fight last night. They are best buds normally, they love each other. This is the 3rd time this has happened. Now I am afraid to leave them alone together. I don't understand why they do this other than them both thinking they are alpha dog. Chaser will be 11 in June, Holly is 2. Chaser has seniority and assumes the position of alpha dog, but Holly refuses to submit. Chaser starts it and Holly always wins. Chaser ends up hurt and Holly is fine. Yes, the pit bull is the loser. If I hadn't got them apart when I did, Chaser might have been killed. Help, I need Cesar Milan!! Any professional advice from dog trainers on here? 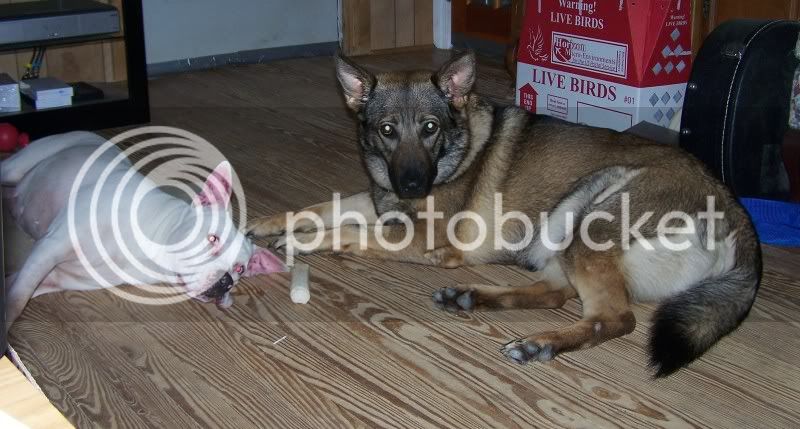 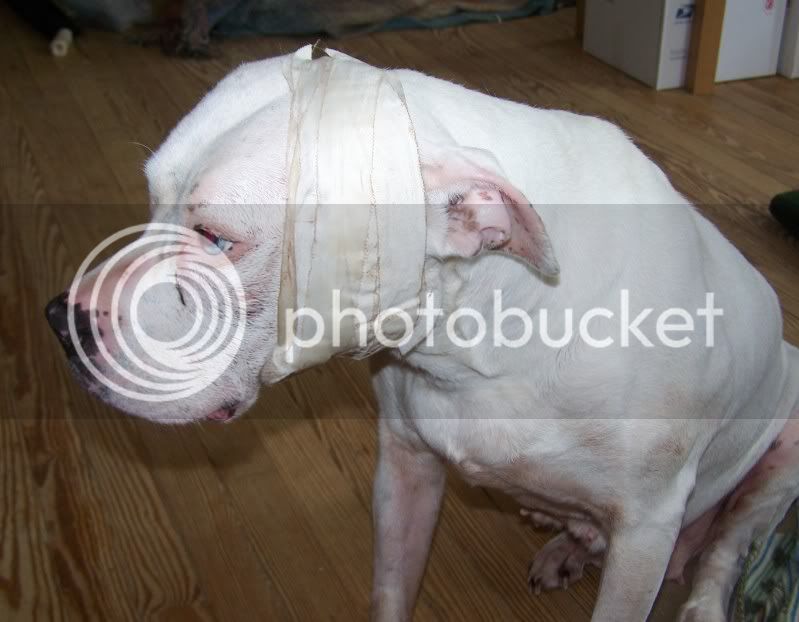 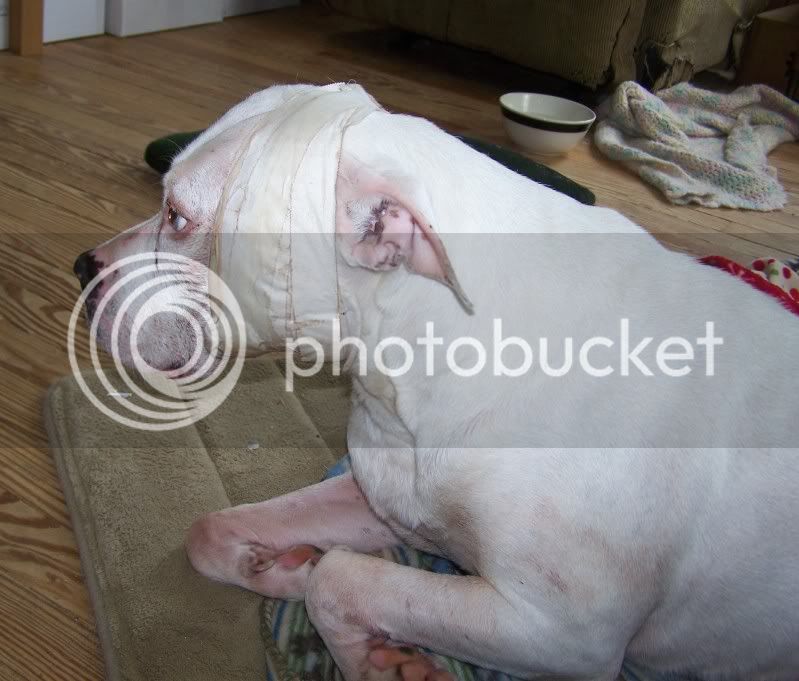 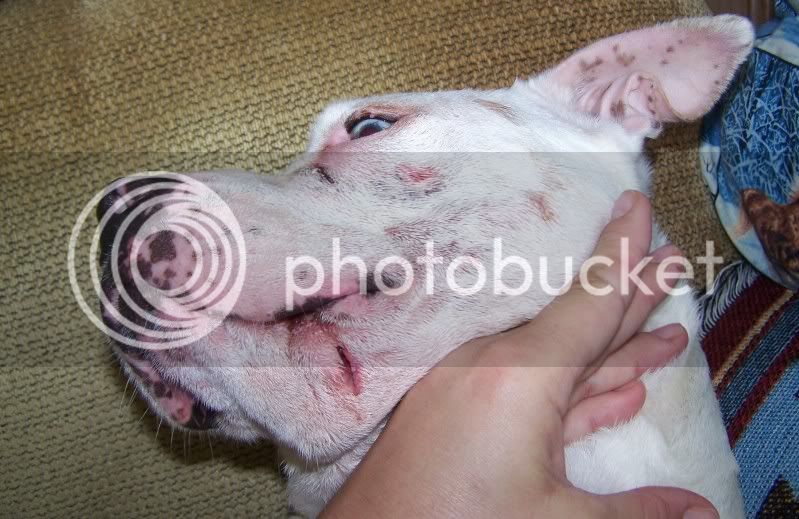 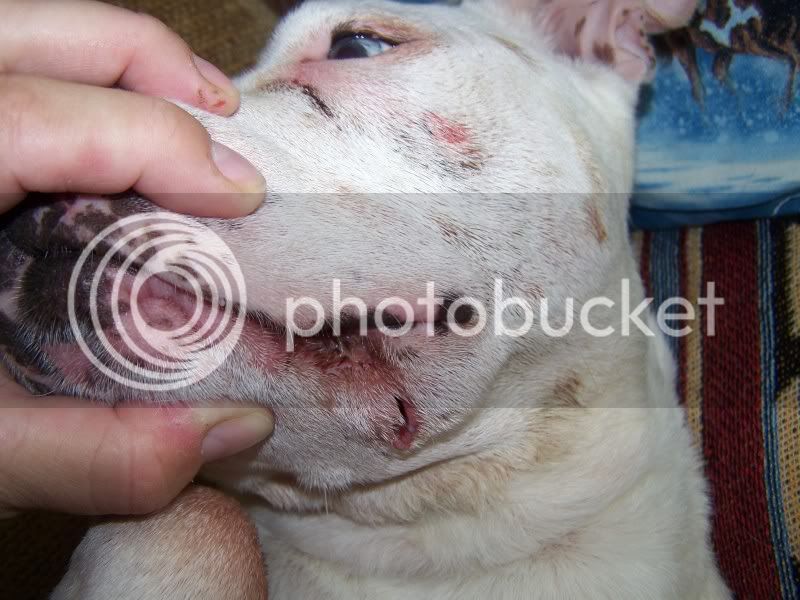 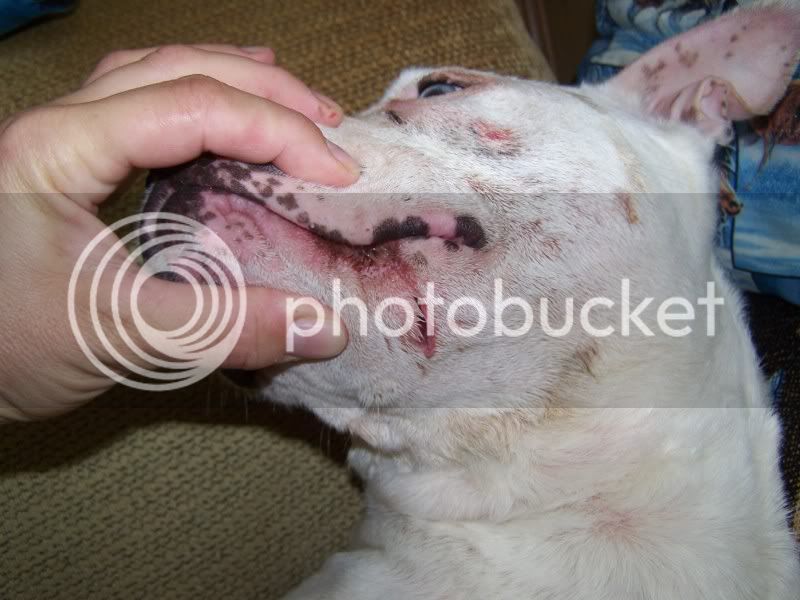 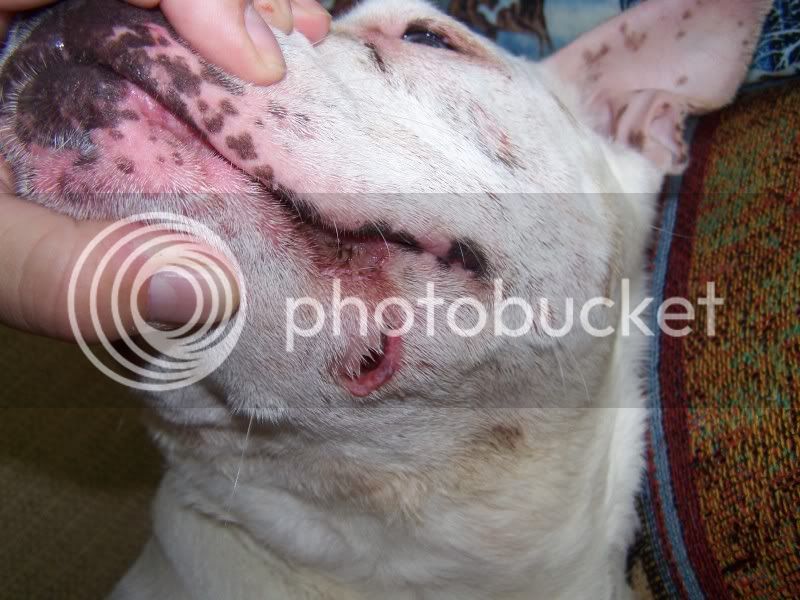 you have two large female dogs who both want to be boss. It's worked in the past because Holly was young. But now she is two and she wants to de-thrown Chaser. chaser is a pit bull and she is NOT going to back down. I have a female pit bull and she is not trustworthy with any female dog who tries to dominate her, although she is wonderful with the two little female chihuahuas I also have. I found a gorgeous female rottie around 6 months ago and I wanted to keep her so bad but knew I couldn't. So I got her back in good health, got her spayed and sent her on to a Rottie rescue group for a permanent home. It was the only fair thing to do for her. Chaser is an old dog and should not have to worry about her position being challenged. The fair thing to do is to keep them apart so they can both live in peace.

What triggered the fight? Food? Your attention? Better seat on the couch? Etc?

Although its not impossible, it IS generally difficult to house two females, that are both a dominant breed, together. Holly is now at the age that SHE wants to be top dog.

What NEEDS to happen is YOU need to be the alpha, if YOU are the alpha, neither dog will try to gain that position.

Only YOU sit on the couch, only YOU sleep in the bed, etc etc. You will need prefessional assistance with re-training them.

BTW, you got lucky with the small amount of damage that Holly did. I had two dogs that fought when I was little, and the male literally tore the skin off my femal boxer's leg. she had to have reconstructive surgery... he was later euthanized. Although I DONT believe that needs to be the case here!!
Last edited: May 24, 2011

Quote:
Advice, yes. You need to get a trainer in to evaluate the relationship between the two female dogs, then you need to either train the dogs accordingly (but mostly train yourself) to manage and prevent future aggression. The more realistic route to go would be to rehome one of the dogs. Female to female aggression is the worst in the dog world. And..sorry to say, as much as I LOVE shepherds, they are the worst for female to female fighting. GSD's aren't naturally great with other dogs, of course, yes, that is a generalization of them. And anyone who has had mulitpul sheps in a house will say the same thing. GSD's aren't bred to work with other dogs, they were bred to work directly with a person. They tend not to be dog savvy, and tend to ignore other dog's body language. On top of that, there's the issue of pack order, and which dog seeking to be the controller of attention, and resources. Usualy that dog will be the GSD in the house.

You've got an uphill battle to manage this issue--which, by the way--will NOT ever go away. Not without constant training and management by you.

Quote:
I agree with everything you are saying. The only problem I see with it though is Chaser's age. She is an old dog and is not likely to be re-trainable at this point. Pit bulls are a little difficult to train even in their prime! My dog Bailey is the most perfect dog I have ever owned. She is brilliant, learns fast and has a huge desire to please. She recognizes us as the alphas in our home. But she also has her triggers and being dominated by another female dog is one of them. When another dog tries to dominate her, Bailey will not back down. So we have to avoid putting her in that position. This is a trait that has been instilled in her by years of breeding. It's a trait I don't like, but genetics is a powerful thing and is not easily overcome. It would be like trying to teach a labrador not like water or training a terrier to not chase rats. Chaser is the one starting this fight because she knows Holly is trying to take her position in the pack and she will die fighting for her dominance.
Last edited: May 24, 2011

I totally agree with alabamachick.. There is a person on here that is a dog trainer. I pmed them 1 time and was told what I already knew. From everything I have read they know their stuff. Jamiethedogtrainer. They could probably help you. Gives real and excellent advice. By the way both your dogs are gorgeous. Good luck and please keep us updated. Sending lots of hugs.

I might be wrong with what I am about to say. But I do not think(not that I was there) your pit is starting it. I think she might be reading your other dog's body language and that is what starts it. Dog's have their own language that we don't always understand. I saw this once on the dog whisperer. They were blaming one dog and actually it was the other dog's fault. I have 4 dogs. 1 is 8yrs old, I have his 2 sons they are 3, and 1 that is 2. One of our older dogs sons tries to take the dominant role. I do not allow him to attack his father. But than again they are males. I would listen to Jamie. Good luck again and sorry for rambling.
Last edited: May 24, 2011

While awaiting behavioral advice, may need to keep them muzzled when you cannot supervise to cut down on injuries.

Sometimes you can find racing muzzles that fit other breeds. I think someone custom makes them for boxers and such...I know they do for cage muzzles. Racing muzzles are light weight, and allow dogs to drink, eat, and pant so can be left of for longer periods of time. Both dogs would have to wear one if you went that route. They should not be used as punishment, and should be slowly added in (ie. Use "nose in" or some other command to have the dog place its nose in the muzzle, using a treat to guide the positioning. Reward with a treat. Over a few days, add on holding the muzzle onto their nose and having them hold the nose in for longer periods of time. Fasten it on for a few seconds, a few minutes, then longer periods. Treats and praise, not force or punishment. The latter will usually give you a dog who will fight and bite you over the muzzle. It turns it into a power struggle). Racing muzzles do break more easily than other kinds. Metal ones can gouge things when broken. Softer plastics are usually a better bet to prevent that. The type of muzzle depends on the kind of use you need. If my computer works...I'll link you to a very helpful dog training forum (free advice). They usually do not use alpha type techniques because trust type techniques tend to have long lasting effects, and less risk of behavioral backlash and increased aggression.

My folks have a 2 year old Greater Swiss male and recently adopted a 2 year old Rottweiler male from the shelter. They are having the same problem with aggression. So far there have been no injuries, no blood shed but it scares the crap out of you to see two 100+ lb males going at it. My folks don't know what to do either and hate to give up on the Rott. He's not the one starting it but won't back down and if you scold the GS then the Rott attacks. They both live peacefully with a 10 lb min pin and older female Rott and another male Aussie X. They also get plenty of exercise with 2 walks per day off leash and free run of the farm. Would like to hear some good advice other than rehome one or keep seperate. What about shock collars? I'm normally against them but getting a shock is better than injury or rehome.

I agee that shock collars have their place. I've seen them used to no ill effect but great benefit on harder dogs for prey drive and distraction training. Some softer breeds or individuals will shut down using shock collars though. Does anyone have experience using them for a situation like this? My worry is that it would be like ticking off the three hundred pound guy at the bar. You can smash a bottle over his head...but oh lotsofsymbols...he keeps coming. You have adrenaline and hormones coursing through at that point. You are running on instinct. The brain actually stops taking in and processing new information under extreme stress. The collar may not do anything but make things worse in such a case.
Last edited: May 24, 2011

My Geese and Dog Are Aggressive to Each Other

Z
My female quails are fighting. No matter what I do to keep the peace, as soon as I remove their fence the bigger one starts attacking the other.

C
At what age do the cockerels really start fighting each other?

D
What should I do? Risk of pecking each other?