My blue bibbed hatched 7. Final two eggs left in the nest were DIS. They are getting lost in the leaves lol
We are experiencing a cold spell, I hope these babies do ok. Pray for some sunshine to help keep them warm. 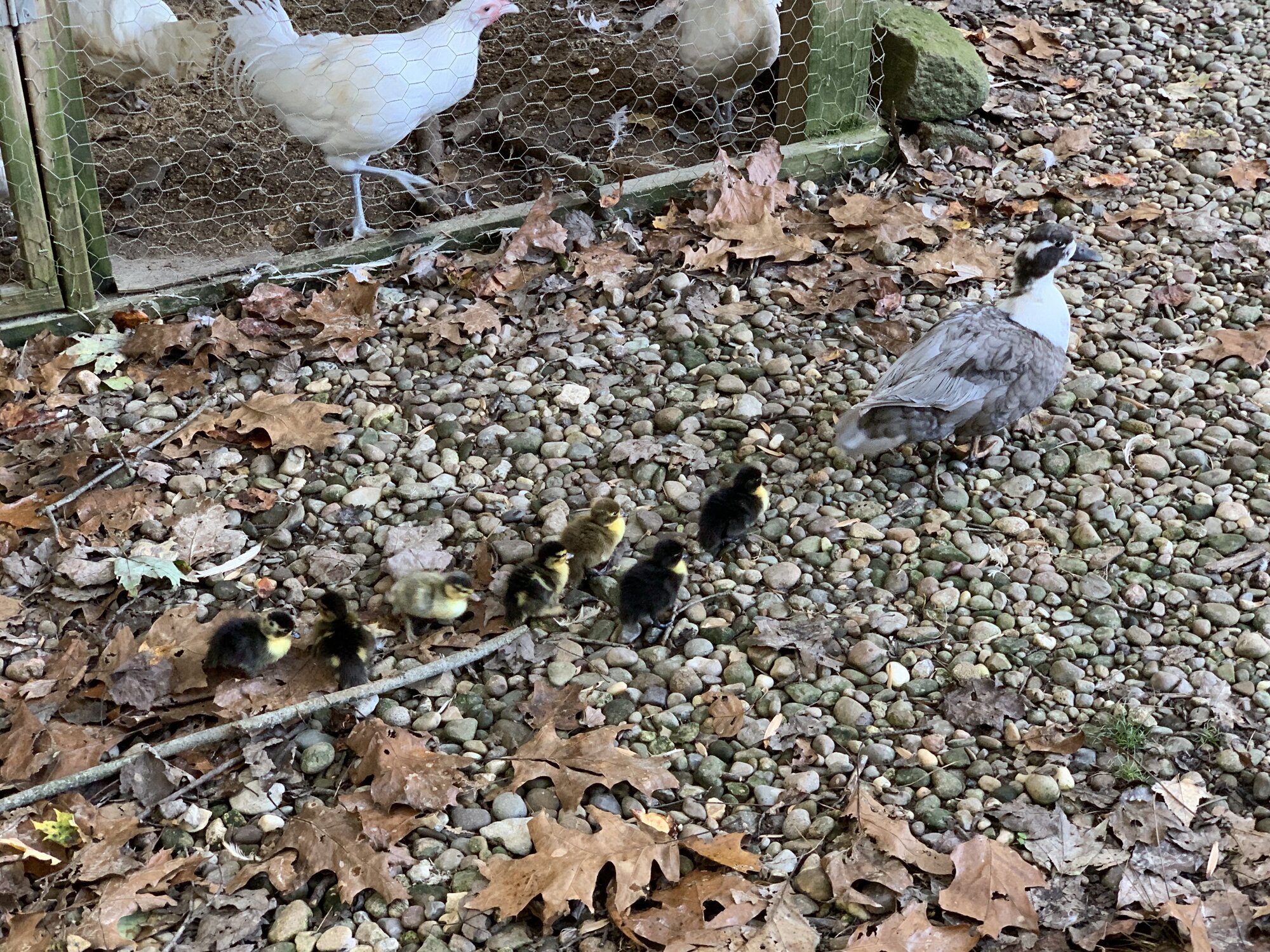 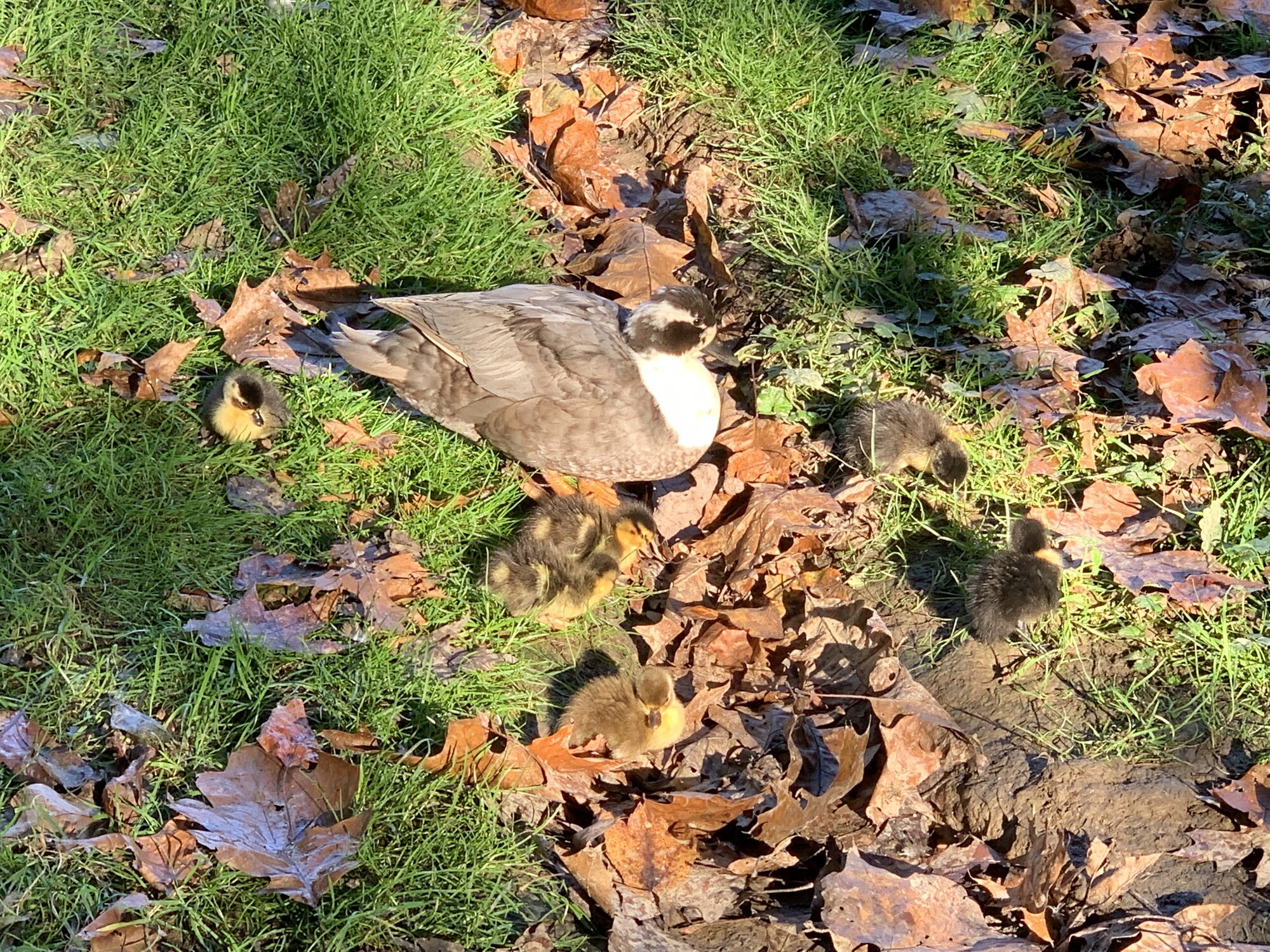 I saw a couple arguments between the blue bibbed and the grey mom, but they will sort it out. Grey mom’s babies are almost 3 weeks old now. 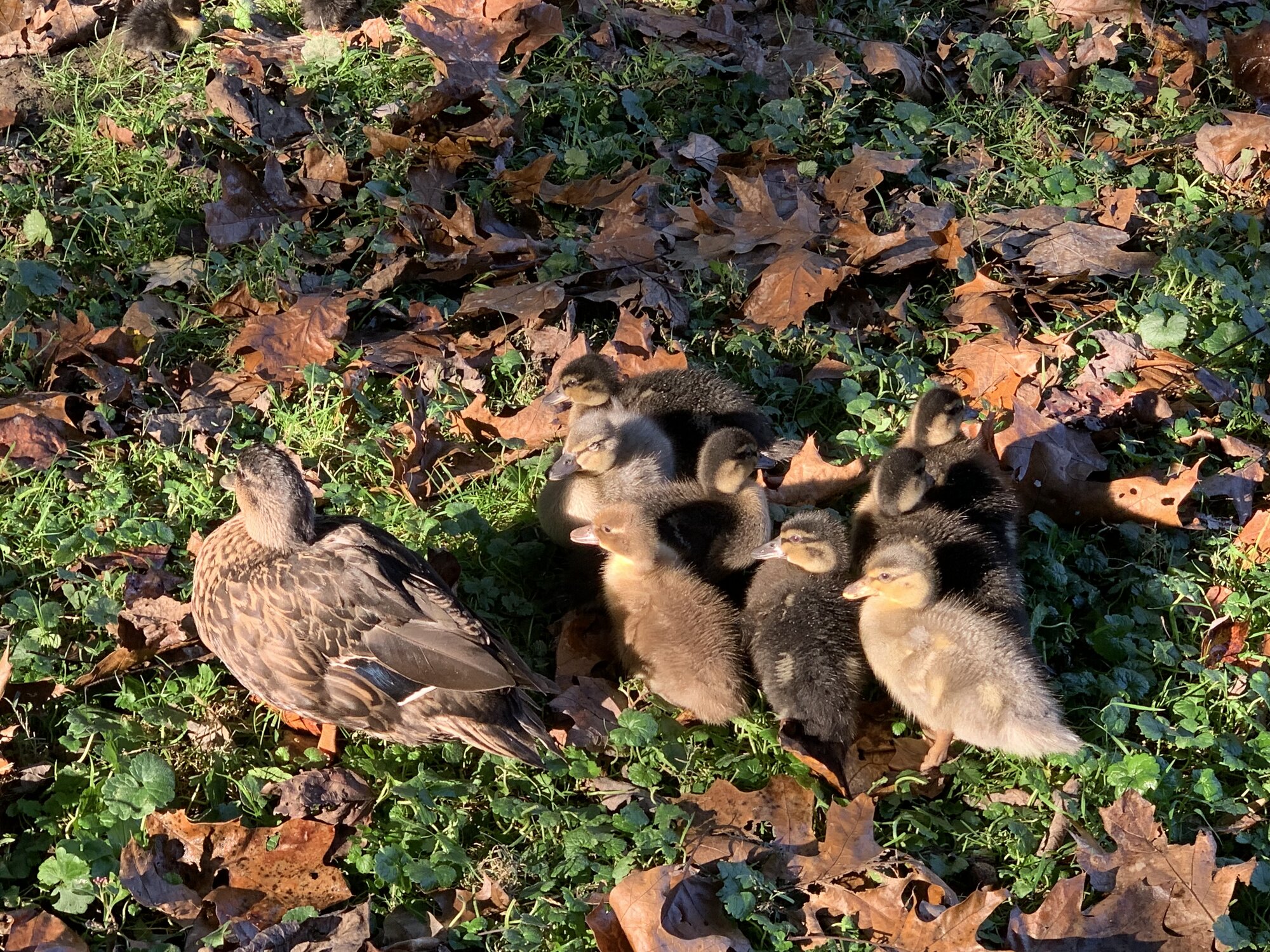 HeatherKellyB said:
@WVduckchick how is Quasi doing? Any better this morning?
Click to expand...

Aww thanks for asking. She looked really good this morning. Her eye was much cleaner than I’ve seen it for a few days, and she was running around, seemed fine! But I’m keeping a close eye on her.

HeatherKellyB said:
As you know, I LOVE runners, but the way their personalities are described worries me a little bit. Of course, a lot of ducks are skittish anytime you come at them from overhead, but are Runners really extra skittish? Their appearance and silliness certainly make up for them acting like you're coming to pluck them feather by feather. Whenever I went to purchase some day olds to go along with my week olds (they were a gift to my daughter) years back, we ended up with a Cayuga and a Mallard (TSC's "duck lady" chose the ducklings for us after explaining that we really wanted some girls and said she was 99.9% sure that both were girls - she was 100% wrong on both). I was so hopeful that we'd have a runner. We named the Mallard "India" because we were so hopeful. I had no experience with any ducks other than Pekins, so that was a lot of my fault. We still have Stormy but unfortunately lost India to a suspected predator one night right before lock up. He disappeared, leaving only one wing feather behind. He was such a good drake. Both of our favorite drakes from that flock were killed by predators. The other one was a gorgeous Jumbo Pekin with the chubbiest cheeks I've ever seen on a big duck. A neighbors dog got him

I could go on and on. I think duck and chicken chat is my favorite topic

Edited: Oh my, that sounded extremely dark. I meant that I could go on and on talking about ducks, not the death of ducks. Let me just go find a rock to crawl under

I just creeped myself out

You're right, my runners aren't really skittish, they just move quicker than my pekins.
And their appearance and silliness are what I love so much about them. They are so cute.

Isadora said:
You're right, my runners aren't really skittish, they just move quicker than my pekins.
And their appearance and silliness are what I love so much about them. They are so cute.

I can’t think of runners without thinking of my sister-in-law’s runner “Chester, the Molester”. His name probably says plenty about him

If I hadn’t gotten Calls, I would have had runners instead.

WVduckchick said:
I can’t think of runners without thinking of my sister-in-law’s runner “Chester, the Molester”. His name probably says plenty about him

If I hadn’t gotten Calls, I would have had runners instead.
Click to expand...

Everose said:
Are you like this with chickens too or just the ducks?

Personally, chickens are cute and I'll always have em, but the ducks are my true obsession. I LOVE, LOVE, LOVE the silkies, super precious and fun to watch but they're not as friendly or graceful (Graceful in looks, we all know the ducks are sleek and pretty but totally clumsy and uncoordinated) or goofy as ducks.

I've had the chickens and ducks for years and the chickens are by far the messiest, noisiest and meanest (sometimes life-threatening) of the two. Ducks are so angelic IMAO, chickens just don't compare.
Click to expand...

Chickens are messier?! I've never had chickens. I just... Can't imagine anything messier than my ducks! And noisier, too? Ducks are my only poultry so I have nothing to compare them to, but I feel like they are so incredibly loud and messy! Now I'm scared of chickens.

Quatie said:
Has anyone ever noticed ducks have great comedic timing? I have an injured duck indoors at night right now. We watched the producers last night and she cackled when the guy crashed down the stairs and broke his leg. We watched a comedy show and she was cackling through the show. Now we are watching murder she wrote and nothing. But then they have not been more dramatic and less comedy. That or she doesn't like murder she wrote.
Click to expand...

Haha! Yes, amazing comedic timing! Anytime we make a joke inside the house my duck Pigweed can hear us and is cackling about it in the barn.

KaleIAm said:
Chickens are messier?! I've never had chickens. I just... Can't imagine anything messier than my ducks! And noisier, too? Ducks are my only poultry so I have nothing to compare them to, but I feel like they are so incredibly loud and messy! Now I'm scared of chickens.
Click to expand...

I can't imagine anything messier than ducks either. I was giving my smallest duck a bath indoors recently, and she made the bath so dirty in seconds we couldn't see the bottom of the tub! She rivals my Pekin who launches poop back 2 ft or more. There are some things you can't unsee... .

. And all the mud puddles they make.

As ducklings, I don't think there is anything messier then they are. As adults, they just don't seem as messy. Of course any water they have access to will be filled with poop, mud, etc. and they'll likely splash water everywhere. Since I don't allow Honey Boo Boo to walk long distances, I carry her to the yard in the morning and back to her house at night. I've found that she is most comfortable if I carry her in an upright position. While I'm carrying/holding her I always keep in mind that her vent is her weapon and she is NOT afraid to use it. My daughter always says, "point that thing (her vent) away from me!". She is pretty accurate with her "weapon" and her ammo is wet and very stinky! She is able to reach maximum range. I guess one reason I say chickens are messier is because they're poop doesn't pile up like a chickens. It doesn't smell as awful as a chickens either, in my opinion. The bedding in the duck houses don't have to be changed as much as the chickens. The ducks don't bill around in their feed like chickens do, making a mess. These are all things that I could/should do something about, except for the smell of the poop. One more thing I just thought about....... my bantam Cochin rooster has a really fluffy butt and I'm going to have to bathe him because poop is sticking to his feathers. This isn't something I have to do often, but I haven't ever had to wash any of my ducks. Maybe put them in some water, but they do the work. These are the things I was thinking about whenever I agreed with @Everose Does this make sense? @KaleIAm @Quatie

Either way, I wouldn't want to be without chickens or ducks

I've shared this picture on BYC before, but I thought I'd share it here in DAA. My big ducks like to line up like this if they're napping out from under the porch. From left to right: Reggie (Pekin drake), Tom (Buff Orpington Duck hen), Honey Boo Boo (possibly White Layer or Pekin Duck hen) and last but not least, Stormy (Cayuga drake).

The story of Pierre duck

Fun with ducks! And a laying question

Do duck re-establish the pecking order? Sudden case of bullying.
2

Tips for Caring for a Sick Duck