Eye infections in chicks. To cull or not to cull?

Hoping for some direction.....

We bought 5 new Heritage Rhode Island Red chicks and they were doing great for about a month. It appears based on our guess of sizes that we may have 3 roos and 2 pullets. The larger few have been rearing up at each other kinda play fighting so when we found the smallest of the 5 with what appeared to be an eye "injury" about a week ago, we thought she must have been pecked by another chick. It was swollen and watery and she would scratch it making it bleed then cry out in pain. I separated her from the rest of the chicks so they wouldn't make it worse, washed with eye drops and put some Vetramycin ointment on it. Well a day or two later the other pullet and next up the ladder in size began showing the same symptoms. We separated her from the rest and put her in with chick #1. Another day or two later the 3rd chick up the ladder began showing slight eye drainage but not quite as bad as the others. Chick #4 has what looks like a droopy eyelid but no apparent infection. The largest of them all appears to not have been affected.

So unless there is a very strange coincidence of eye injuries this is a contagious situation. There are no other symptoms and only 1 eye is affected on each chick. I have cleaned and doctored chick #1 daily, trying to make sure to keep the eye opened up to get the medicine in but today I couldn't get it open because the drainage is like glue. I barely got chick #2's eye open and medicated but by bedtime it appeared to be glued shut again. This drainage is like tan colored wood glue or something. I don't know if they have lost sight in those eyes or not.

Ok, so my question is how can I tell if this is something that they will carry on and later infect my existing adult chickens? I have been advised by a few Facebook members to cull them and take the loss but then others give me advice on how to treat it and keep my animals healthy, etc. They are eating and drinking fine and the infection seems to be getting better but now I don't know what to do with them.

I've only been a chicken owner for a few years although I do read a lot about it and have studied CRD and MG but there aren't any other symptoms so I just don't know.

Sorry for the long book but I am hoping someone can help me understand what to do with these little ones. We have a small store where we sell eggs and hatch out chicks for sale and I don't want to take any chances with mine or anyone else's chickens for that matter but I also hate to kill them for what could be just an eye infection.

Oh yea, by the way I had been treating them with Corid when this started because I found some red poo from one chick, once.

I'm sorry to hear about your chicks

The only way to know for sure what you are dealing with is to have some testing.
The one chick also looks like it has a lesion or growth on the beak as well. Have you noticed if there is anything inside the beak?
Even though only one is affected, I would lean toward this being a respiratory disease. Mycoplasma or if there is a strong foul odor, then Infectious Coryza.
I would be interested to see what @dawg53 thinks.

Unless you practiced a strict quarantine, then it's possible that your existing flock might be exposed, but since you have not observed symptoms in them as of yet, Personally I would cull. It's a hard thing to think of and I wouldn't want to be in your situation. Culling would reduce the risk of spreading disease.

IF you still want to continue to treat - use warm compresses to help get the eyes unglued. Flush with saline and apply your ointment. If it's mycoplasma, you can use Tylan50 to treat secondary infection. Dosage is .20ml per pound of weight given orally 3 times a day for 5 days.
State Labs http://www.metzerfarms.com/PoultryLabs.cfm
Independent Testing http://www.zoologix.com/ 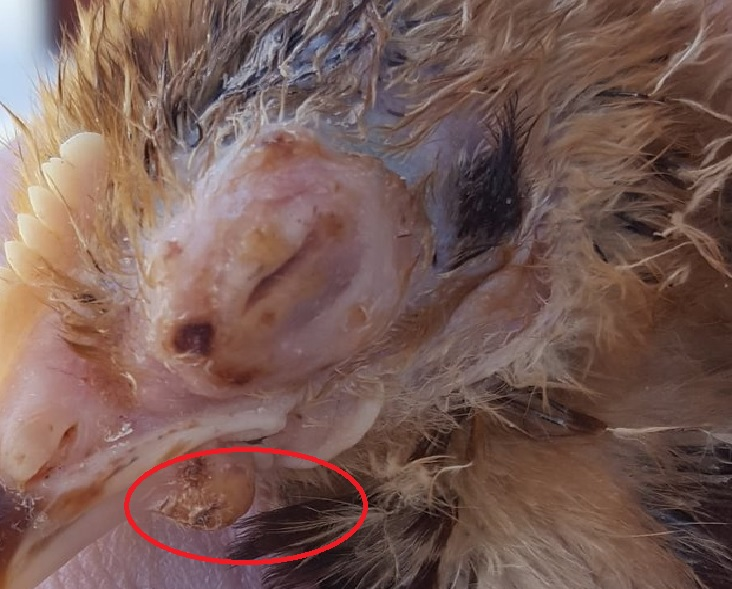 Thank you Wyorp Rock for the information. There is no foul odor and yes the growth under the beak was another question I was wondering about. I haven't looked inside her mouth but she and chick #2 both stretch their mouths open often. I was just thinking they were uncomfortable but now I'm curious so I'll look in the morning.

I've been doing the treatments you mentioned but it's getting harder to get the eyelid open even after warm water compress on and off for 30 minutes and I was never able to get chick #1's open today.

I just went out to check on the "boys" and it looks like chick #3 Is getting worse. Her eye is stuck shut and for the first time it appears to be affecting her other eye so that's not good. The largest 2 seem to be fine and very fiesty. I wonder if they are immune? Since they've been exposed though...?

It looks like fowl pox. Scratching the lesions close to the eyes can cause the symptoms you're seeing. Continue with supportive care. Buy Terramycin eye ointment and put a tiny bit in their eyes, it'll melt once applied and continue as needed. Provide electrolytes and/or Poultry Nutri drench to boost their immune system. The fowl pox should go away on its own in about a month or so.
Also open their mouth and look for lesions in the mouth, entrance to esophagus and trachea. If you see lesions, it's wet pox which can cause neck stretching.
Finally, there's the possibility that they have MG in combination with fowl pox; the symptoms are there especially with neck stretching (if there's no lesions, there's mucus build up in the trachea trying to breathe) and of course droopy eye is usually a symptom of MG also along with eye drainage.
Tough choices: You can wait it out for the fowl pox to go away on its own and see if they recover back to normal. Or if in fact it's MG with fowl pox, cull.
Bloodwork from your sickest bird can determine if it's MG.

Ahhh thank you for your input dawg53. I had wondered about Fowl Pox too because of the little one's lesions but she's the only one with that and the eye leaking began first so I didn't know but after reading up a little more on it, this sounds more like it because these chicks were not exposed to anything other than maybe a mosquito! I wonder if the breeder is having issues....

They were in a rabbit style cage inside my main pen though and my 6 grown chickens were eating their spilled food underneath the pen. I pulled each sick chick out as they began to show symptoms and brought them inside. In the middle of all of this were some more adult chickens brought in that I had already bought so I'm working with 3 different groups and definitely trying to keep everything clean.

So now I basically have 3 one-eyed chicks. Getting those eyelids open is next to impossible with all the warm compresses and ointments I can come up with. After seeing the 3rd bird with his 2nd eye showing symptoms, it's not looking good for him. I wonder if their eyelids will open and correct itself later when the lesions are supposed to fall off if it is in fact Fowl Pox.

I'm going to see what it will cost to get a blood test done on him today...

I was thinking Fowl Pox ... Where are you located? Are there alot of mosquitos?
Years ago I had some chicks that got bumps & hadn't the resources I have now, they didn't make it. Now when I have chicks, the brooder they go in is screened & all cracks are sealed. So far been good. My older pullets have gotten Dry Pox, they've done good but never want to deal with Wet Pox. I have since cleared out all the brush from around their Chicken House & do mosquito control.

Hope the blood tests are affordable

I hope that's all it is ChickNanny13 and thanks for the screening suggestion! I think I will do that from now on. We do have a good bit of mosquitoes around the pen area. I guess chicks are more susceptible?

Well I met up with a lady from MS Board Of Animal Health and gave her 2 of the chicks to test and find out what's going on. She offered to do it for free which is awesome but said it'll take a couple of days to get the results. Fingers crossed it's not MG or MS.

B
Open and infected naval

Baby chick with eye infection, should I bring it inside?
2 3