Eye not growing/working properly because of old injury - seeking advice

This post is going to contain all the info about our chicken, so there might be a few other health issues addressed in this post. Thanks in advance for reading and/or helping.

About our little Primo: 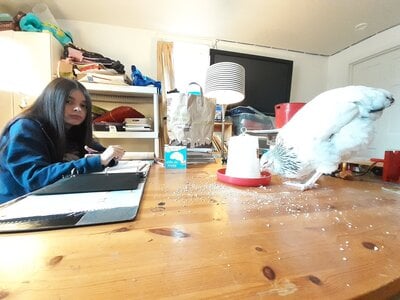 2) His eye has not been growing or seeing properly since he had an injury in the area at around 12-13 weeks. (i could be off on the timing and could look back)

3) At first, the injury, which was a nip from the dog, only looked like it affected his ear and maybe neck. But i never found any neck injuries and the ear healed as far a i can tell, but not until after we went to vet and got antibiotics at about 18 or 19 weeks. Before that, I just treated with natural remedies at home and initially treated the injury with antibacterial ointment and hydrogen peroxide and dietary supplements.

5) For weeks after the accident, even though the eye slowly deteriorated, there was also something that may have been discharge from somewhere b/c i noticed a very faint brown color to a few feathers just below the injured area, but on his neck.

6) Our mid-size dog was being fed by my one daughter when Primo flew from the other side of the yard, where he was with my other daughter, to get to the dog bowl. Apparently the dog even growled, but when Primo kept eating her food, she nipped. I wasn't there, unfortunately, and realize my mistakes I made. But I thought my kids were able to handle things. And I think the dog would have done worse if she really wanted to. I'm just glad he's ok, but I really feel bad about his eye. And it's clear that it's not growing normally anymore. During the week after the injury, he had a lot of panting and being restless. I thought he had fever because his little feet seemed really warm. The panting continued on and off for a few weeks.

7) Primo eats a good mixture of chicken scratch and high protein crumble, along with all sorts of extra chicken treats and seeds added in. He's been eating very well but only for about 3 weeks now. Before that, we had all sorts of problems with his eating. We adopted him at 4 weeks, and he ate fine until about 8-10 weeks. Then he began not eating food and starving himself and only wanting whatever people or dogs were eating. (He has never been around other chickens, so we tried all sorts of tricks to encourage him and be interested in his food). He started to get dependent on plain cooked rice and cooked potatoes. It was the only thing I could get him to eat. But I tried to hold out and let him forage and eat his chick feed, and that's when he got into trouble with the dog. So after the injury, I decided to just give in and cook rice for him until he got better and back on track. So that took many weeks. I think he was beginning to be malnourished, possibly, because his feet and comb were very light pink. So I have continued to add vitamins periodically to his water and I do feel he's finally eating a balanced diet, and only that. Now that I have him on track with his diet, what can I do for his eye? We saw a vet twice, and I will post info below.

8) Poop is totally back to normal. When he was eating a lot of rice, it was runny somewhat, and when he was on antibiotics, it was black and watery. So glad we don't have to do that anymore.

9) The first vet said there was nothing wrong with his eye, but gave antibiotics. At the time, the non-growth wasn't as clear as it is now, because he's gotten bigger. They gave antibiotics for what I described as him not eating and being a bit lethargic a couple times. The second vet was virtual and said "It looks like either there is pus inside the eye or the lens has become damaged a either luxated or developed a cataract."

10 ) I'm not sure what to do, if anything, about his eye at this point. I thought maybe it was nerve damage or bacterial since I didn't treat for that right away. I could maybe try to do chicken chiropractor, if that would help. I mostly like the eye to grow, if not be functioning for sight, if at all possible. Other than that, I would like advice on if he's severely malnourished or if any other indicators of illness I should be aware of. He's had other minor injuries/food issues like eating plastic, but this hasn't seemed to affect him yet :/ I've also wondered if he has stick tight fleas on his eyes, but don't really know how he would get that. But you can see little black specks in around the good eye in the full-size pic of him today.

Having a house chicken is very interesting. We'd like him to be healthy as possible and will move him outdoors in the spring possibly. He acts totally normal despite the injury and loves hanging out with us.

PS. I don't think he's full grown yet. He seems like he's still filling out quite a bit, still getting feathers, and is just starting to crow, kind of. He actually makes all sorts of weird noises and sometimes sounds like a goose. He could be a she, but we adopted him because he was a he, according to his original family.

Eye right after the bite 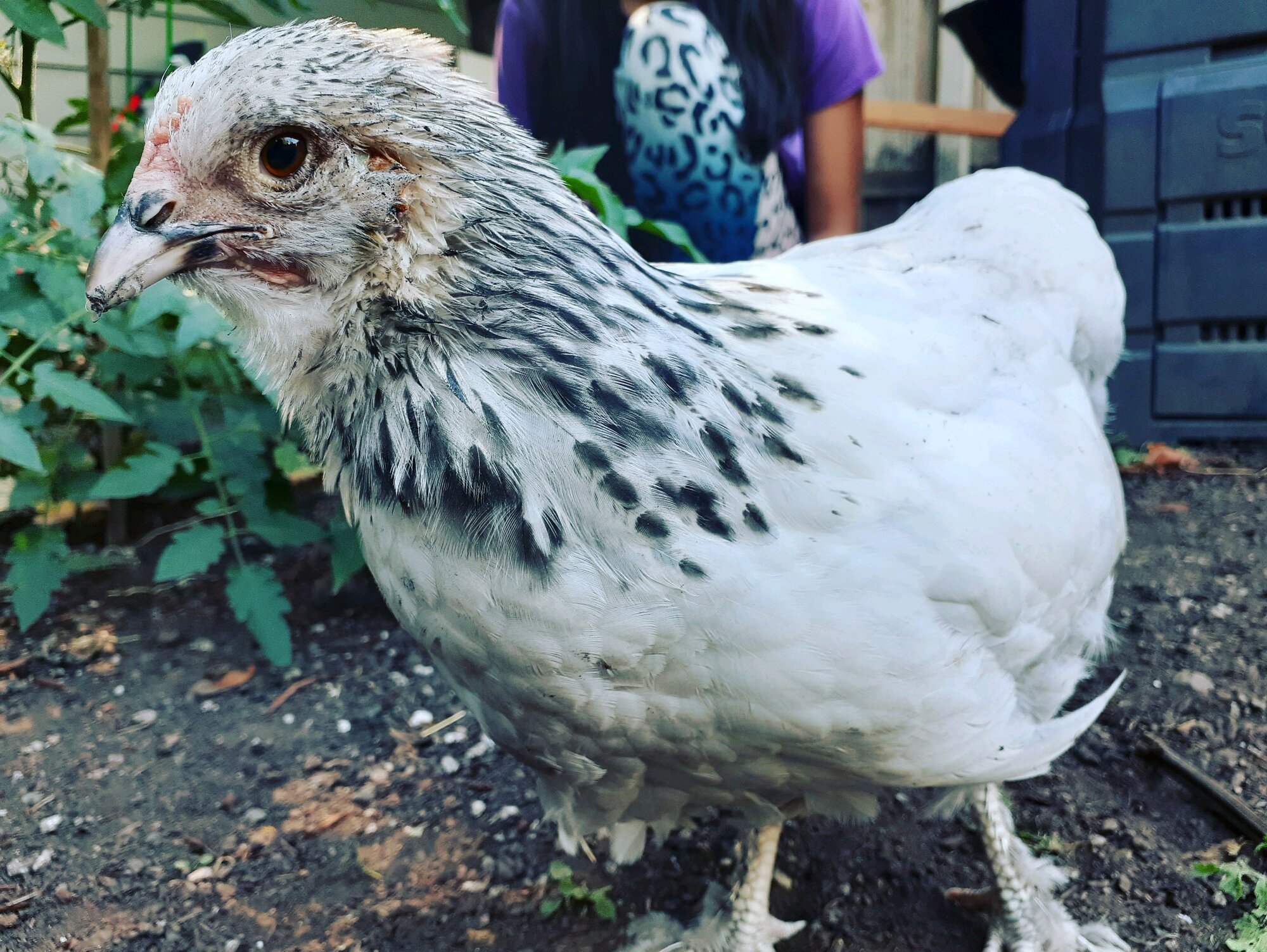 Ear right after the bite 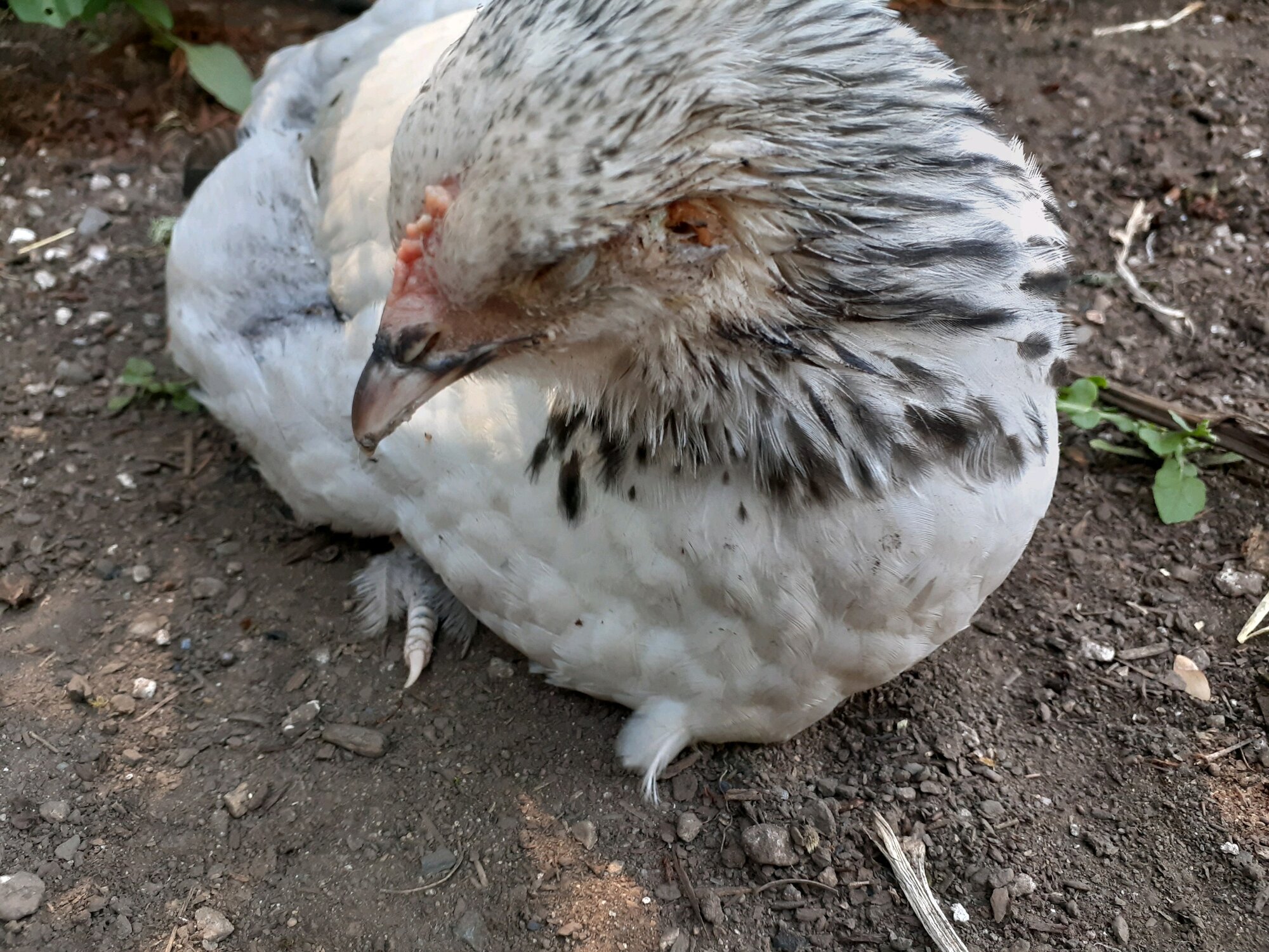 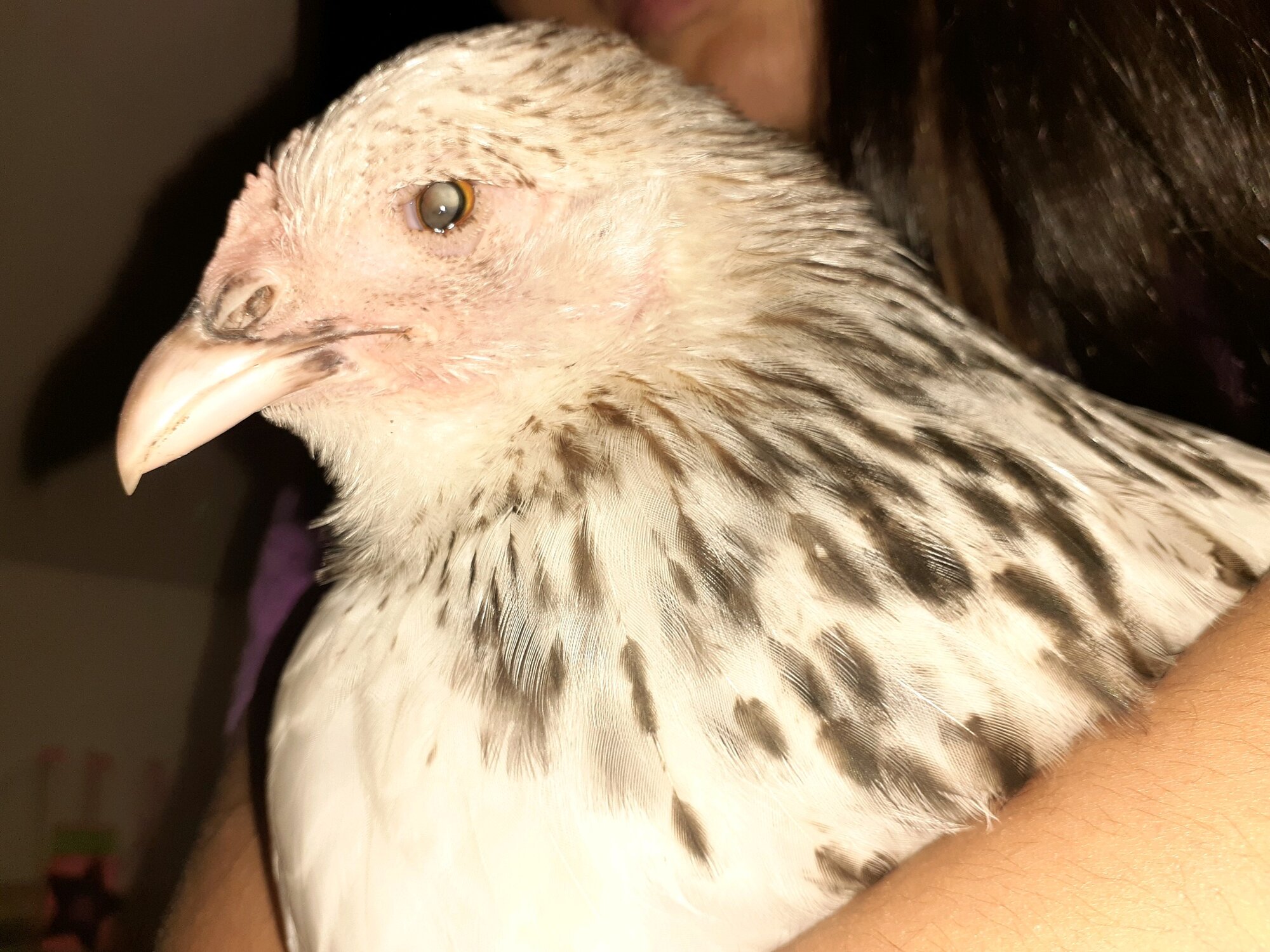 Pics taken today, full chicken shot, good eye, bad eye, close up of bad eye (it's so hard to take pic of his eyes, because he doen't stop moving.) 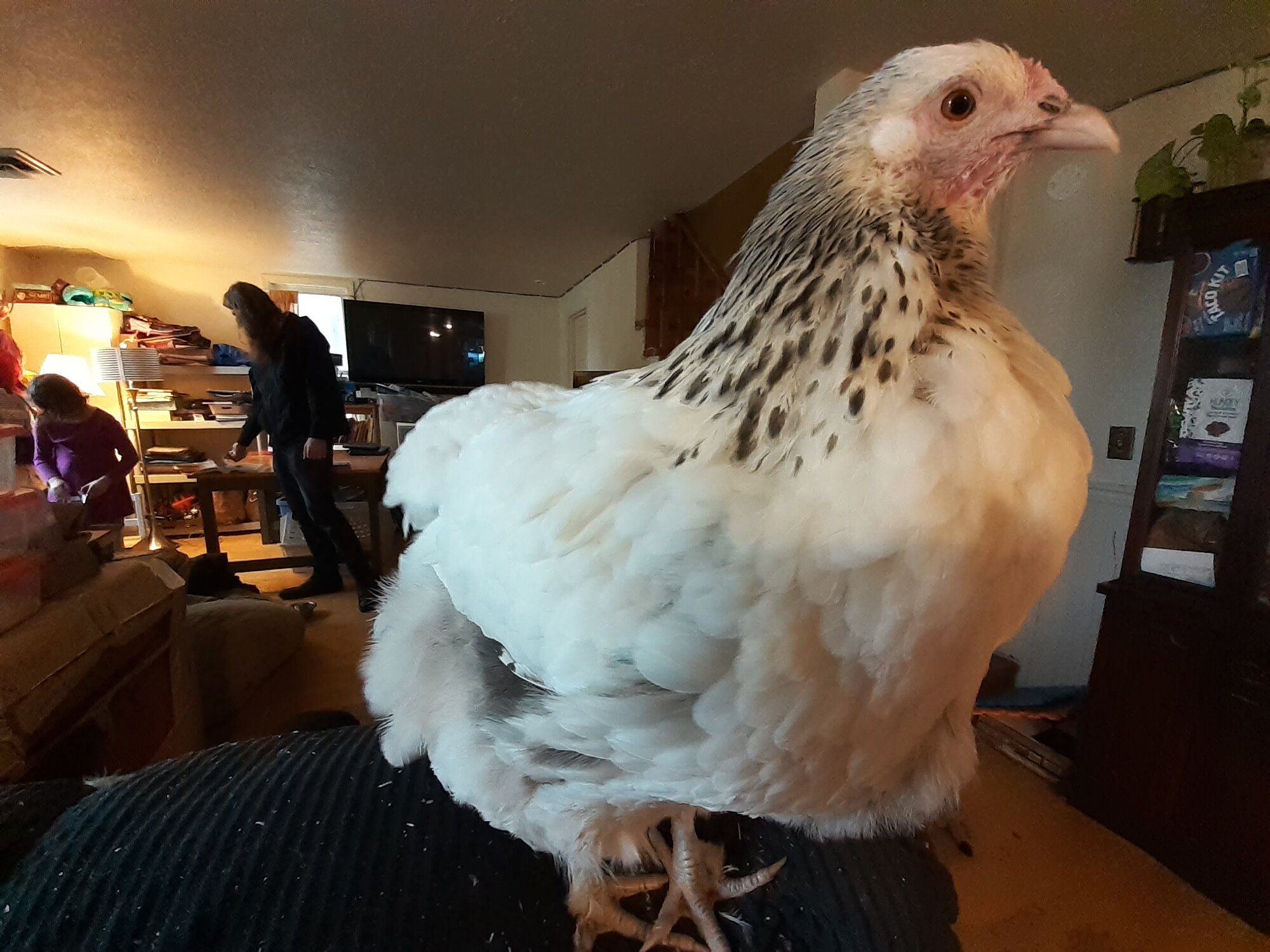 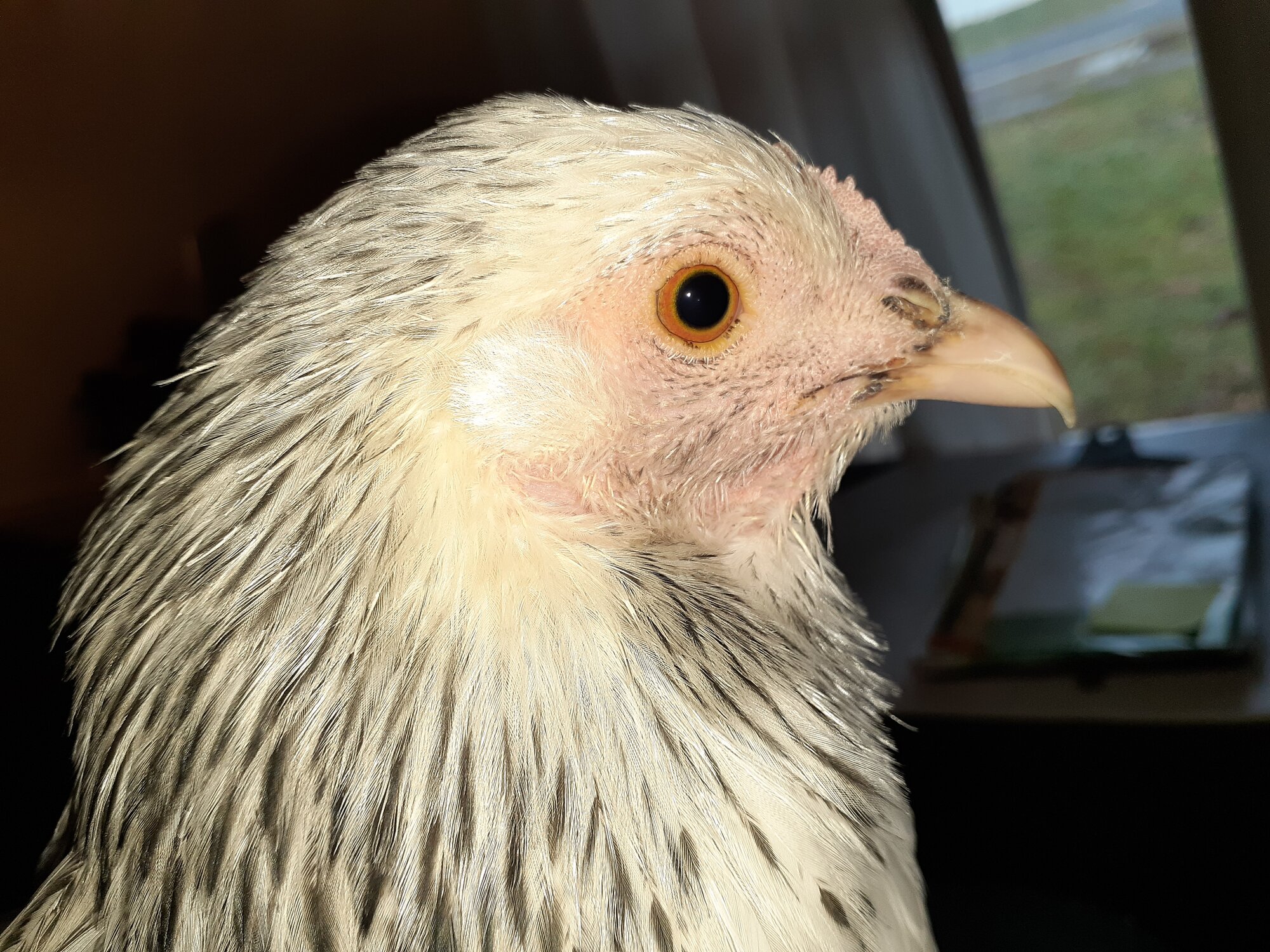 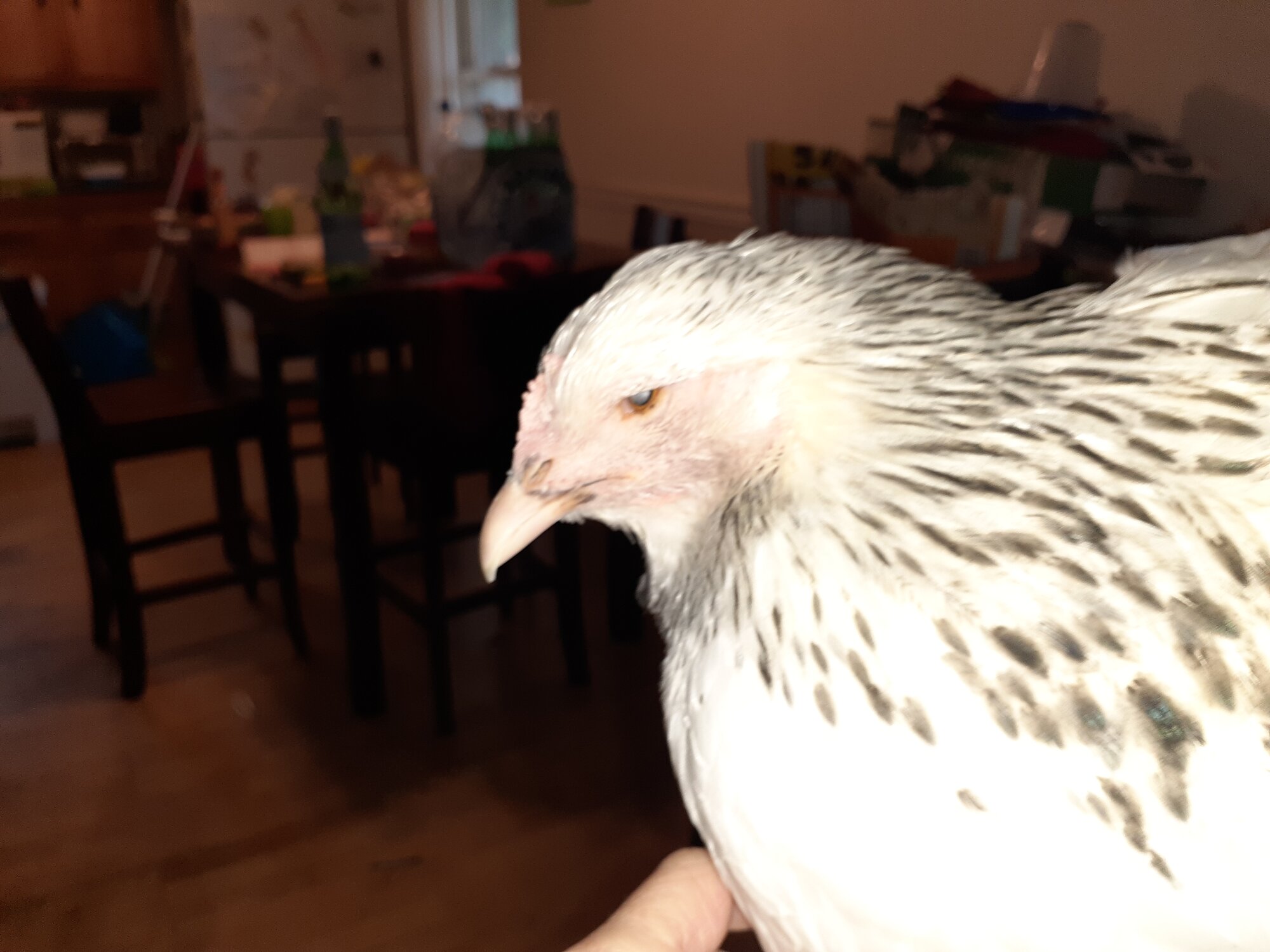 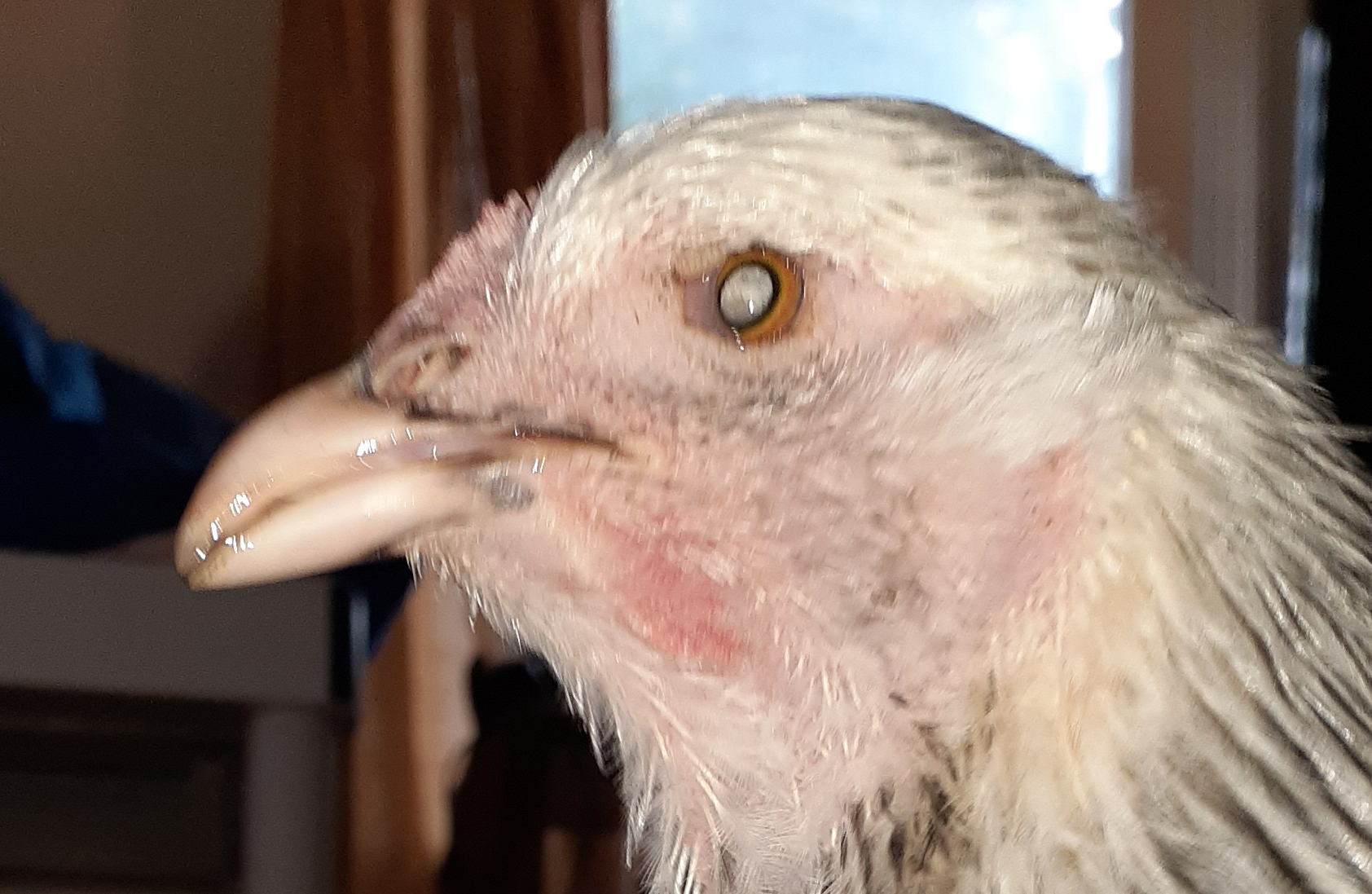 Just from the picture of his cloudy pupil, I would say the eye is mostly blind from a cataract. He may be able to see light and dark in the eye, but his eyesight in that eye is probably very bad. I don’t think there is anything that you can do to fix the eye. I am sorry. Many chickens will suffer an eye injury in one eye, and most do well in familiar surroundings.

Eggcessive said:
Just from the picture of his cloudy pupil, I would say the eye is mostly blind from a cataract. He may be able to see light and dark in the eye, but his eyesight in that eye is probably very bad. I don’t think there is anything that you can do to fix the eye. I am sorry. Many chickens will suffer an eye injury in one eye, and most do well in familiar surroundings.
Click to expand...

Thank you for your advice. Do chickens get cataract from injuries like that? Even if the original injury wasn't directly to the eye?

I havent read your post yet but I want to commend you for reading the sticky topic and providing all the information!

I wouldnt blame yourself too harshly about the original injury. Accidents happen. No one could have anticipated a chicken not backing down to a growling dog. LOL

I agree that he'll be okay even if hes blind on that side but he clearly isnt very predator averse so i wouldnt recommend letting him free range unsupervised.

I think he needs a flock. Being in the house makes him happy because hes with you guys but being alone outside isnt good for him and I'd guess that's why hes not eating.

T
Rooster as an eye injury
2

Rooster with an injured eye
2 3