I live in western Washington, and I'm planning on getting some chickens. I have a million questions, but my first is about fencing. When I was a kid we had chickens, and (like most people I imagine) we lost a hen to a raccoon one night because my dad left the coop door open. I was 5-6 at the time, and I still have vivid memories of following the trail of feathers and little blood drops until we found one of her legs. Needless to say, I never want to have this happen again. I am terrified.

Ultimately, will my chickens not be safe unless the fence is buried and has a roof on it? Because I don't see what's to prevent the raccoons from just climbing inside the fenced area, effectively trapping the chickens in a space with predators.

The only consideration here is that raccoons are mostly nocturnal as far as I know, so maybe as long as the chickens are safely inside the coop before dark they would be safe, without having to have a buried fence and a roof? The only chicken we ever lost (except for one juvenile who was free ranging and just never came back) was at night in that unsecured coop.

I truly wish I had all the money in the world. I wouldn't hesitate to spend it if I felt I could in good conscience, but I've gotten a quote from a fence builder and he said he'd do a plain fence for $750, while the buried roofed version was $2,100+. I honestly shouldn't even spend the $750, but I'm terrified of my chickens running off into the woods and getting eaten by a coyote or something. I'll spend the $2,100 if I have to, but I don't want to do it if it's just my worries getting the best of me, and it's really unnecessary.

Can someone tell me if my fears are founded or if I'm just an excessive worrier? Do I need to do the complete enclosure, or would just a plain fence be fine, because if I spend $750 on a fence that doesn't work, I've wasted $750.

My coop is in the part of my yard where the lawn meets the forest, so just barely into the trees. It's great for shade and some protection from the rain/snow, but I worry that predators are more likely to be there because it is more secluded.

Also, I know a lot of people use electric fencing. Would having that eliminate the need for a roof or for the fence to be buried, or is it just added protection? I hadn't even thought about it until recently, so any insight is much appreciated.
Last edited: Feb 22, 2019

For my run I use an old dog run surrounded by a 3 foot tall hardwire cloth that is buried in the ground 6 inches. I free range during the day so my birds return to the coop at night by themselves but I still lock them up. I have hardwire cloth buried 6 inches down around the coop too. You can use the hardwire cloth on top as well and it is a lot cheaper than $750. Raccoons can also come out in the day but I’d worry more about foxes and hawks.

Skirt the run with hardware cloth and use electric fencing with chainlink. Should keep out most things.

Assuming you want to protect from EVERYTHING, you'd need wire mesh no larger than 1/2" in openings throughout (maybe down to 1/4" if mice are a problem, so far I have not found mice to be an issue), a roof, and electric strong enough for a bear.

Realistically it's difficult (and expensive) to make a set up that tight. So I'd say consider what predators will be the most problematic and aim to protect from those. I have chain link (which I had a fencing company install) and hardware cloth up the sides about 2' and out as an apron about 2' to prevent digging, because we have rats. We've had raccoons come by but they can't reach in because of the hardware cloth. Added netting over the top for birds of prey as we did have a hawk kill a chicken. Nothing's buried except the posts.

A roof can still be a good investment because it keeps rain and snow out. In hindsight (with the recent snow storms) it would've been nice if I'd gone with a roof but it does cost quite a bit more.

Have you considered a very secure coop and a less secure run? While not 100% foolproof, a secure coop helps with "most" predator issues, since as you say, they are mostly nocturnal.

There's a lot to consider,
it's like getting a sip of water out of a fire hose,
and many ways to build a workable coop and run.
Take your time, read a lot(with grains of salt) and take notes.

DIY will save you big bucks, but does cost time.. and takes skills(old or new).

Welcome to BYC!
Where in this world are you located?
Climate, and time of year, is almost always a factor.
Please add your general geographical location to your profile.
It's easy to do, (laptop version shown), then it's always there! 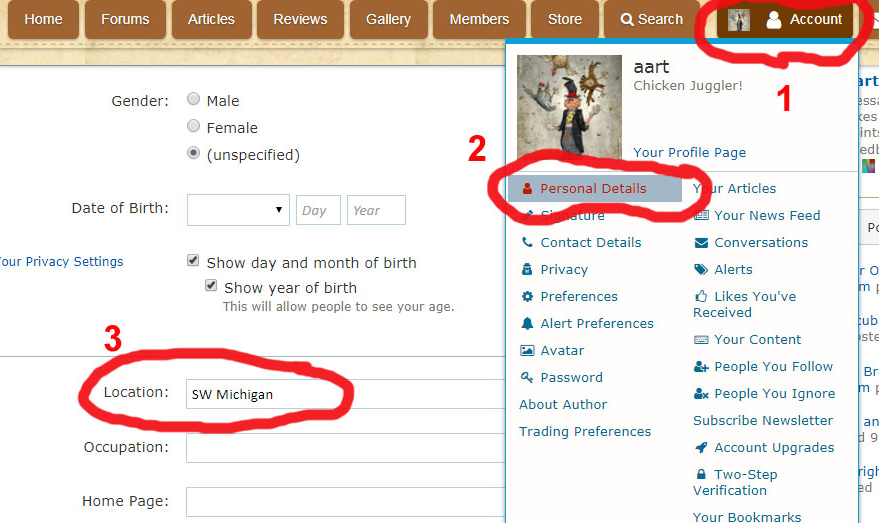 I'm not trying to be rude, but I will point out that literally the first sentence of my post said that I live in western Washington...

I did follow your instructions to add it to my profile though. Thanks for that.

AmyJane725 said:
I'm not trying to be rude, but I will point out that literally the first sentence of my post said that I live in western Washington...

I did follow your instructions to add it to my profile though. Thanks for that.
Click to expand...

If you weren't trying to be rude, why even bring it up?

Since we want you to stick around and have a good experience, here is some context that might help.

1. @aart copies and pastes that same "where are you" message and images about adding your location to your profile to pretty much anyone who asks a question who does not already have their location noted in their profile.

2. She does this because (we hope) you will be spending a lot of time on here talking to people, and location plays a big role in a lot of chicken related matters. Asking your own questions, and answering other people's questions. Do you plan to post your location in the body of every question you ask or when providing someone a piece of advice (where you location plays into the applicability of the advice)? Doubtful, since that would be annoying to have to remember to do. At least it would annoy me to try to remember to post my location each time.

So there is some context for you.

AmyJane725 said:
My coop is in the part of my yard where the lawn meets the forest, so just barely into the trees.
Click to expand...

How big of an area was the quote for $750? Guessing they were quoting you for a certain amount of lineal feet of fencing? The compromise may be to have them build you a great quality fence that is sturdy, then you can go and predator proof it by burying your own hardware cloth skirt. You don't even need to bury it if you don't feel like digging! You can lay down a hardware cloth skirt on the surface, use some landscaping nails/pins to tack down the edge, and then either allow grass to grow thru it, or put a thin layer of dirt or sand or gravel on top to cover it.

Then decide if you want to roof it yourself. Depending on what sort of square footage we are talking about, most likely would be way cheaper to roof it yourself. Either with wood cross beams, or PVC pipes. BUt like I said, the shape and size of the fenced area is going to dictate a LOT of the options for roofing it.
Last edited: Feb 23, 2019

Another thought/question. What sort of fence is in that $750? Solid wood? Using wire/hog/cattle panels between the supports? If solid wood, would it be any cheaper for them to use panels? I personally love this style..... 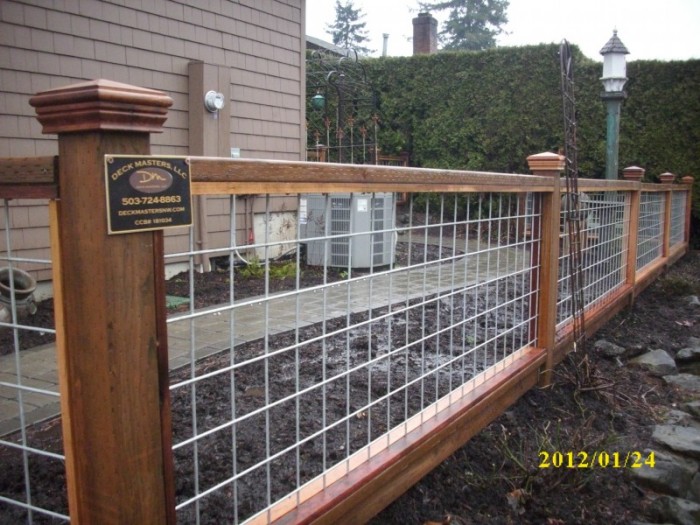 Could they quote you something of that style, but using smaller openings in the panels? 1 by 2 inch, 2 by 4 inch, etc....
You must log in or register to reply here.
Share:
Reddit Pinterest Tumblr WhatsApp Email Link