I wanted to write this to help anyone who had the same question I did when I first got into fermenting feed. I'm an avid fermenter (is that a word?), I make my own sourdough bread, kefir, saukraut and other fermented foods. However, the concept of fermenting chicken feed was new to me.

Most of the writing on making fermented feed consists of 2-3 days of fermentation and submersing feed in water. This wasn't ideal for me, as I'm not an organized person, and would likely forget to prepare food for my chickens 3 days in advance. Draining the liquid also seemed like a chore. Being familiar with ferments, I had a nagging thought, that is, ferments that are up and running generally need less than 24 hours to do their magic (ie. milk kefir - 12 to 24 hours, sourdough starter - 6 hours max), so theoretically the same could be done for chicken feed.

After looking into it a bit, the concept really isn't hard to understand - chicken feed is mostly made of grains, and grains are fairly easy to ferment. So by this logic, I should be able to use my sourdough starter (a grain ferment) to ferment chicken feed right? As I couldn't find *any* information on this on BYC, so I decided it was time to experiment.

I used my active sourdough starter to kick start my fermented feed one night. I added just enough water so the feed was moist, but not mushy. Lo and behold it was smelling just like a sourdough starter in a couple of hours. By morning, it actually had a layer of hooch on the surface - 8 hours was more than enough. I decided it was ready and fed it to my chickens. The benefits were pretty instant, my chicken's poop didn't smell as much by the evening and seemed firmer than before.

When I got to the last bit of my first batch of fermented feed, I used it to start the next batch by adding more water and dry feed. This time I placed it in the fridge, and let it ferment overnight in the refrigerator. This worked better - it had a good aroma and did not exhibit signs of over fermentation (hooch/alcohol layer on the surface).

Since then I've pretty much sustained the same formula (I'm about a month in). One batch typically lasts my 8 birds 3 days. When it runs low, I simply add more water and feed. I eye the amounts I use - the same way I feed my sourdough starter. My sourdough starter has never gone bad, so I have no reason to believe that my fermented feed starter will. Some where along the way, my ferment has taken on a very nice smell, a little bit sweet and almost yoghurty. I've been tempted to taste it myself more than once!

So yes, with a boost from my sourdough starter, I've found that feed can be fermented without being underwater, and fermentation can be done in under 6 hours (if you leave it at room temperature). The chickens seem to be reaping all the purported benefits of a fermented feed.

Thanks for sharing! I could never ferment my chickens feed because I have around 70 chickens and that would be very hard. That's great to know, though!

Thank you for this post; I’ve been using the water I rinse out my starter container each feeding and adding it to my fermenting vessel, and even that little bit of starter in the water seems to boost the fermentation of my feed—it definitely looks different and fluffier when I do that.
S

I'm interesting in trying fermented food too. Would using homemade kombucha tea instead of water work?
A

I have never fermented anything but yogurt before, but I'd like to try. Should I just ferment some feed normally, then use part of that to start a new batch? I don't have sourdough starter!!!

AntiqueB said:
I have never fermented anything but yogurt before, but I'd like to try. Should I just ferment some feed normally, then use part of that to start a new batch? I don't have sourdough starter!!!
Click to expand...

That's what I do and believe they refer to that method as back slopping.

I have used kombucha that has over fermented and also used the whey leftover from my milk kefir when making cheese and yogurt. The chickens absolutely love it. I dont drain my liquid off though, I mix in layer feed and chick feed to soak up the liquid and make it dry. They gobble it down. Every so often I use dry kitten food to soak up the liquid and they really love that too.
S

Thank you for the info. I happen to have over fermented kombucha and some whey on hand. Another chicken project. I love it!

If you chop up excess scobys in small pieces (use scissors works best) the chickens gobble them up too. I tried a food processor but just got a stringy mess lol.

I took photos of the process! I put it in a jar so it’s easier to see... 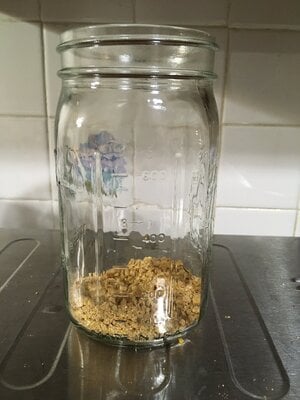 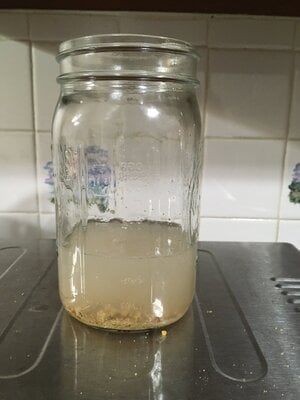 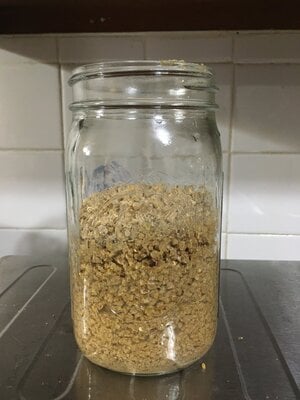