...they are missing their tail feathers, but it looks like down is still there on 2 of the 3 with the 3rd one having bare skin.

We have a mixed flock of 17 birds total...16 hens. It seems that I have 1 buff brahma hen and my buff brahma rooster that are a little bare and a golden laced Wyandotte that's really bare. A spot about the size of a .50cent piece around the vent.

Nearly two weeks ago I put in the pen a large tub filled 1/4 way with peet moss with some DE mixed into it. The birds have been using it really well though I'm just not sure all are getting in to take a dust bath. Here's the DE I used... http://stgabrielorganics.com/product/insect-dust-diatomaceous-earth

I'm due to change bedding in the coop/run, which isn't really too dirty yet, but since I hadn't addressed the mite issue before putting them in their new coop I figure I need to change the shavings.

I actually just tried spraying them today with some Gordon's Permethrin I got at TSC mixed 10ml per half gallon of water. It was hard spraying them in the day time, but I know I got most all of them on their backs because I could see them fluffing their feathers to dry. I fairly certain I got the vent areas sprayed on the 3 with the issues.

I know it's best to spray while on the roost, but my birds, full grown by the way and waiting on eggs, are not roosting at night. They are getting into a corner where there's an old dog kennel box over their heads. I need to block that area off and raise their roosting bar up higher and give them a ramp to it so they will use it. Then I can try spraying them at night.

I think it's the two leghorns that I have that are doing most of the pecking and I hope I don't have to get rid of them.

I also think some of the pecking will go away when we start letting them out in the yard...which will help when cleaning the coop/run.

Hi hoytman! Are you thinking your dealing with mites?
Could they be molting?
It's that time of the year for my girls.
The first thing I noticed was tail feather loss and around the vent on a few of them. Others just had feather loss on the neck and head.
DE isn't something I use.

do you have pictures of your hens? how old are they?
H

I know I am dealing with mites...I just moved them a little Oct. 4 from a tiny, tiny coop...and when I moved them I found the mites. That's why I gave them the dust bath box about 2 weeks ago. I wanted to spray them then but we've had some cold temps until today and tomorrow. I know I should clean out the coop of shavings because I'm certain that the once clean shaving now have mites too from affected birds. I will remove shavings, spray, let the coop dry tomorrow, and perhaps spray the birds again.

Shouldn't be molting...birds aren't even laying eggs yet. Due to start laying any time...there about 19-20wks old.

I can try and take some pictures. I don't want to try and catch them...have nothing to catch them with. We liked to never got them moved into this new coop/run.

Be back in an hour or so with some pictures hopefully.

ah, yes, if you saw mites, it is mites....I personally have no experience with them, but I use DE on regular basis and do a monthly cleaning and use vinegar when I can to scrub. I also regularly add oregano and garlic into the feed when I chop veggies or give them certain snacks, I think this has also helped. I added extra roosts (higher up) - they love them! Good Luck
H 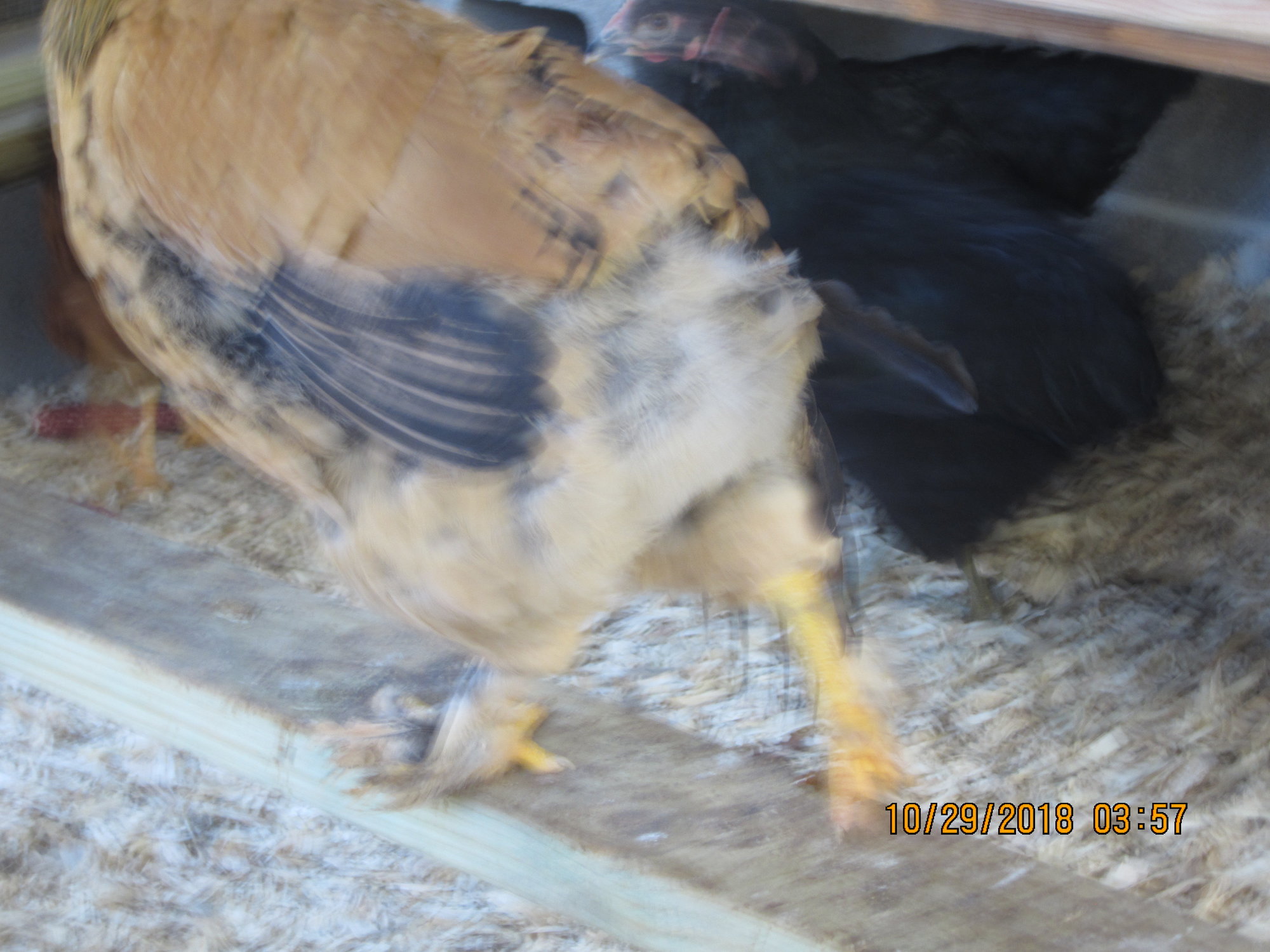 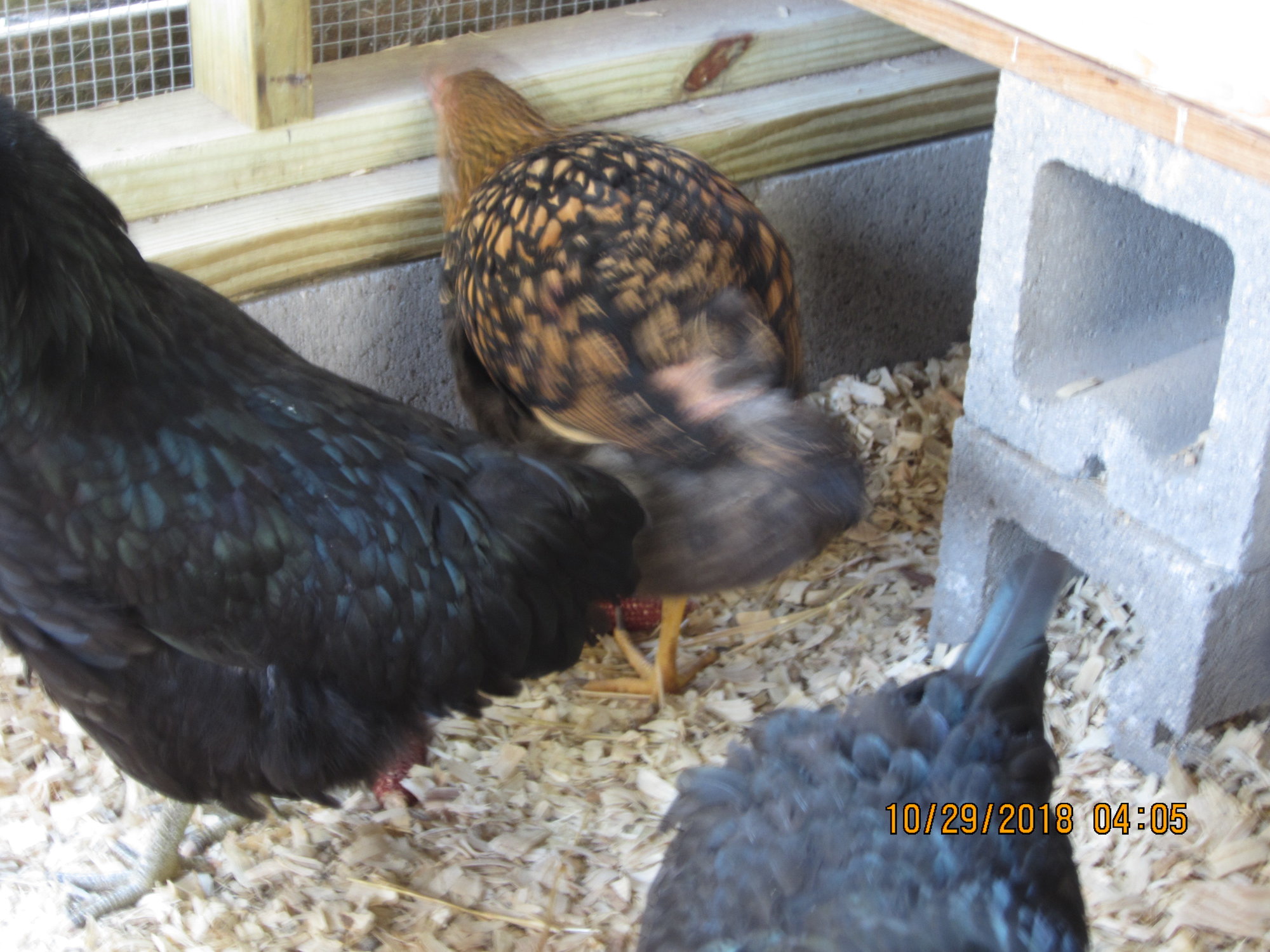 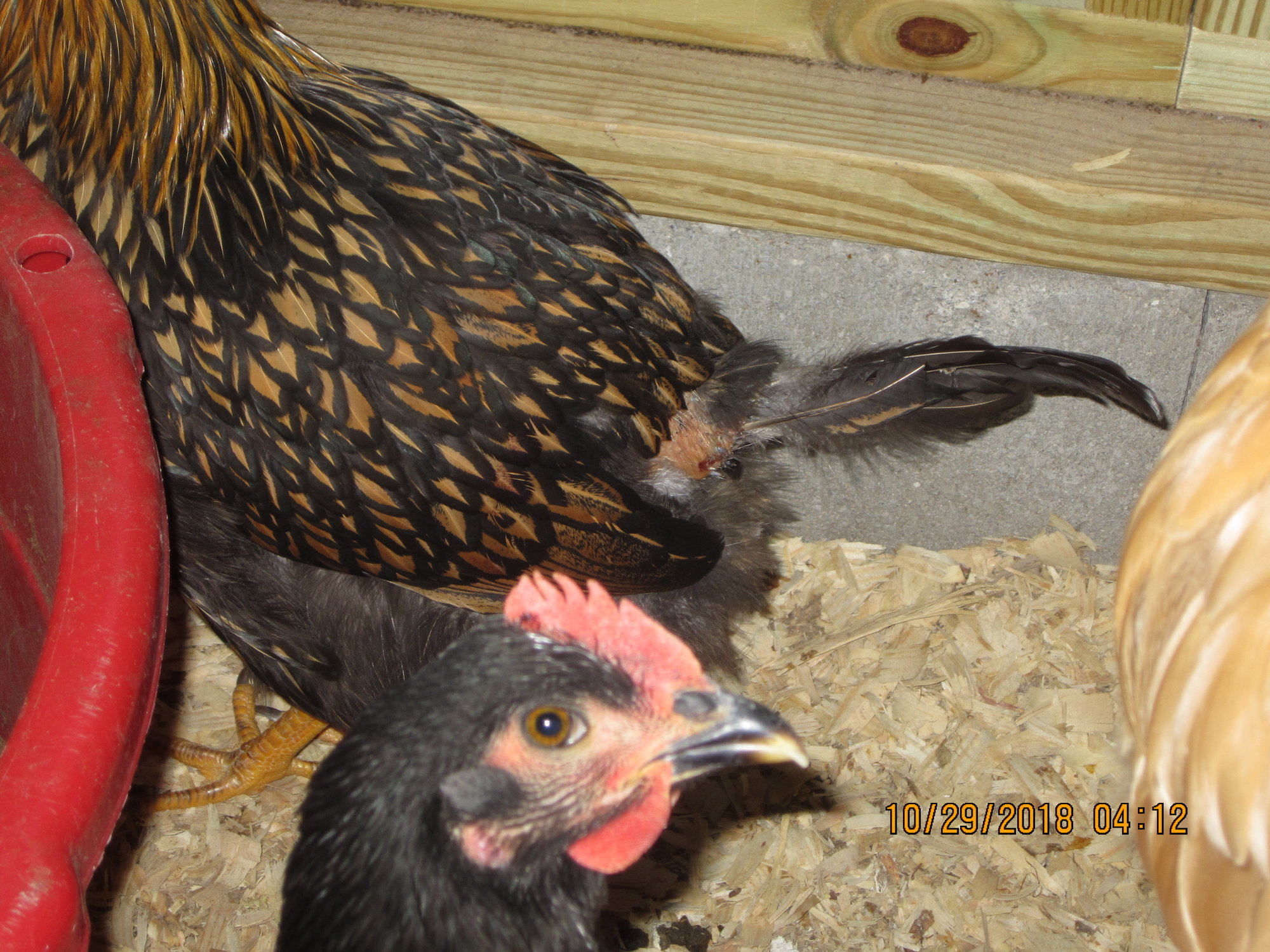 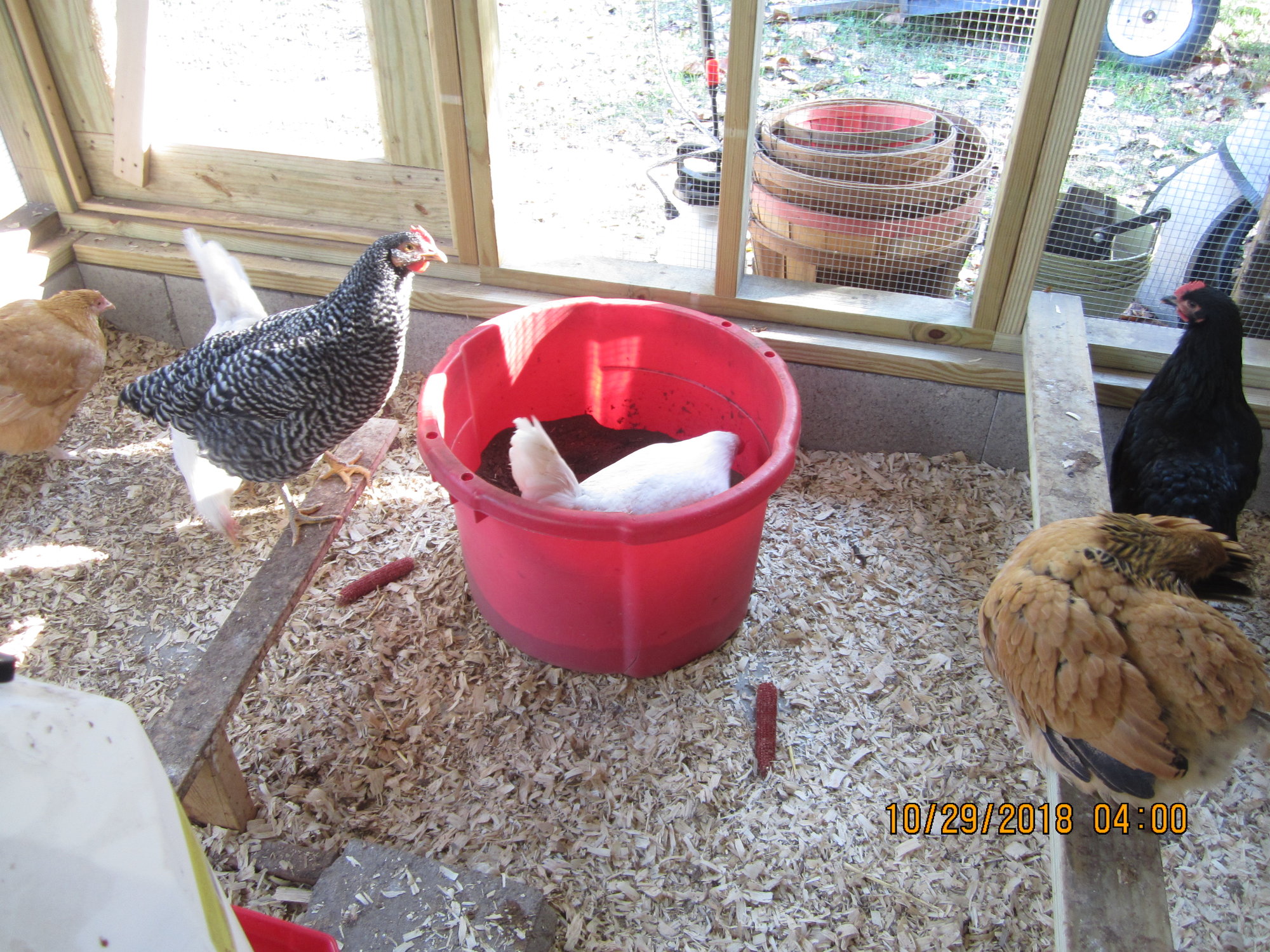 Sorry for the blurry ones...the worst of the 3 birds is in the clearest picture...the golden laced.

Ahh I missed where you said they weren't laying. Sounds to me like you have it under control .
Nice looking birds! Good luck!
H

Not under control yet. I knew we were having some issues because I noticed the tail feathers missing, but today is the first time I've seen my Golden Laced with a bare butt. I am hoping between the dust box and spraying that this will stop.

However, it seems the leghorns are the ones doing the pecking to the others. A few of the others are picking on the 3 as well, but perhaps it's because of the mites. I hope they just aren't pecking just to be pecking.

You would think the dust box being in the coop for 2 weeks would've helped by now. I do need to change that bedding out, then spray the coop before replacing with new shavings.

"IF" the Leghorn are "pecking/picking" ... AND you still have the small coop ... you might want to seperate the leghorns for 3-4 days ... this should knock them down the "pecking order ladder" a tad ... and stop them from bullying ... for awhile hopefully ...

Question - How big is their coop? Run size?

Too many birds in too small of space can cause feather picking ... so can low protein ...

What are you feeding them?

I understand the frustration, it's rough when your flock isn't well. Definitely clean out any area harboring moisture. DE OR any product like PDZ to absorb and dry out the areas. Hopefully the spray your using helps. I have never had to deal with the issue, thank goodness! But I'm sure you'll hear from others here at byc that can help.