For three days, I've had a large, male bobcat hanging around my coop and pen, trying to get to my chickens. He's been completely fearless, not even bothering to run away when I yell at him. Once I even fired off the shotgun with 12 gauge rubber shot at him. That evening he came back and was waiting for me as I was coming out of the pen with the feeders, which I always bring in at night because it attracts bears. That cat was only four or five feet away from me, standing there like it was someone's pet! I hollered at him, " Get off my property, you filthy beast, and don't come back!" Well, what else could I do?

Around mid- morning, I went out to take the chickens some squash, and first thing I see is a huge pile of golden under-belly feathers. I think - OMG! He got Irene (the GLW)! Then I run up to the pen and find the gate wide open and THEY'RE ALL GONE! I think- that SOB wiped me out!

But there was Stan the SLW roo, still locked in his guard shack, adjacent to the pen. But there weren't any piles of feathers in the pen. I glanced up then and saw three SLW's strolling over to the coop from the direction of the compost pile. They were kind of in shock and weren't sure they wanted to go back inside the pen. So I ran and got some grain and that convinced them.

That encouraged me. Maybe others were able to survive. Then I saw some light grey shapes on the compost pile. I'm excited and run over there and find all three Brahmas picking through the compost. They weren't all too eager to go back into the pen, either. I got them all back inside, and I'm counting my blessings that I didn't lose them all!

I'm walking over to re-rig the electric around the pen, and I hear a mad clucking coming from the coop. I think - the bobcat's come back! So I grab the pepper spray and get ready. But the clucking's coming from inside the coop. I open the coop and Irene hops out of a nest. She had just laid her egg and was announcing it like she always does, and it always sounds more like a warning of danger than bragging.

So I didn't lose all of them - Alice, Claudia, Lilith, Irene, Betty, Diane, Nancy are all okay. And Stan, bless his ornery heart, is also fine.

But I'm so traumatized I can't remember the name of the one that got killed and eaten.

I was certain the bobcat had moved on. I had only latched the gate with the "S" hooks, not the carabiners. And the electric had been off. That's all corrected now. The bobcat will be back, but it probably won't be today that the cat returns since it's got a full belly now.

This is tragic, but it could have been so, so much worse.

And there are the six new babies in the brooder in the house. Life goes on.
Last edited: Jun 13, 2010

Thank goodness he didn't wipe you out!

I hope next time you load that shot gun with some proper shot and take the price of that dinner out of his hide. He will be back, and a cat that fearless could easily attack a child at a given opportunity.

You know how to keep him coming back for sure? Shotgun!!! If you were close enough to see him your close enough to take a shot. That will make sure you never see him again. Good luck!!

I am wondering if maybe he wasn't somebody's pet, I have heard of people getting them as kittens and then when they get to big or wild they dump them in the woods well they have no natural fear of humans being raised by them they are dangerous be careful.

Let me get this straight. You had the Bobcat in sight and fired rubber bullets at it? Thinking it was not going to come back?.next time take a loaded gun with you..he'll be back. he knows where to get a good and easy meal from.

Funny how trauma and shock affect memory. I was cleaning up the pile of feathers, trying to remember who was lost. Then I found a larger back feather among all the golden under belly feathers. Michelle. The brownish feather was hers. My Araucana.

I am tempted to load the shotgun with a heavy field load. Take that SOB out for good. I could do that.

But I live in the middle of the wilderness. It's home to all the wildlife that were here before I intruded. They're just trying to make a living the only way they know. It's not their fault I was careless with the security of my flock.

Thank goodness there are no children here. Just me.

But I'll be watching for the first opportunity to get that varmint in his evil eyes with my can of bear pepper spray. It might smart enough to teach him to stay away.

I'd only execute the bobcat if I felt he was a real danger to me.

Let me get this straight. You had the Bobcat in sight and fired rubber bullets at it? Thinking it was not going to come back?.next time take a loaded gun with you..he'll be back. he knows where to get a good and easy meal from.

Quote:
I agree with this if this cat comes where you are looking at you like hay i am here for dinner, than something is terribly wrong, it is possible that it could have come from a wildlife rehab also, i know most try to limit human contact with wild animals but they still learn not to fear humans total cause thats were the food is coming from.

Really sorry you had to go threw this, I lost 8 ducks in 3 weeks to bob till my dogs took care of the problem ,it was heartbreaking. 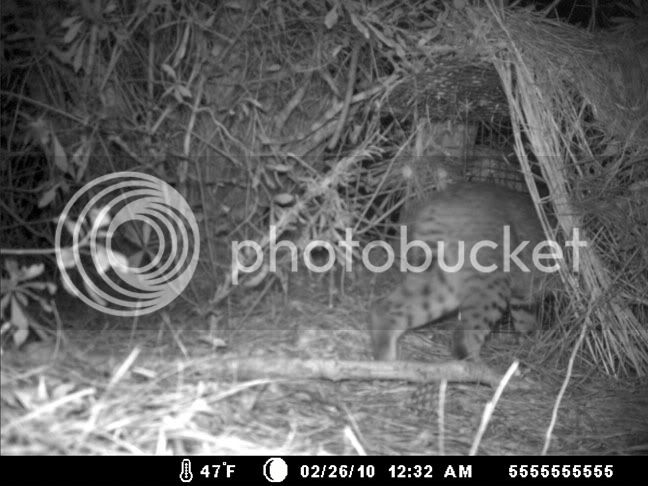 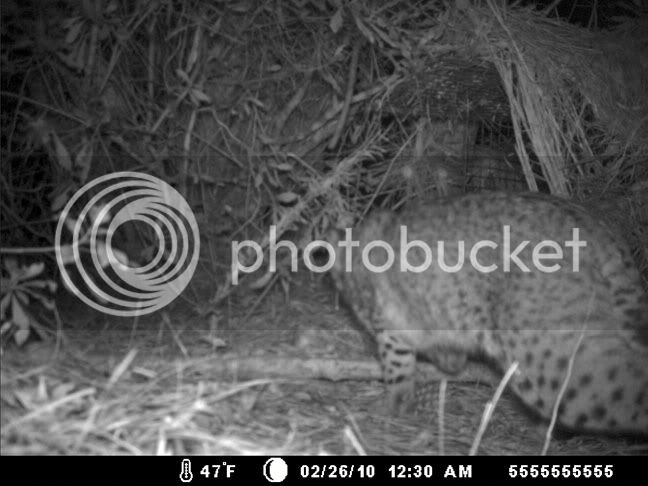 I'm sorry that you lost your favorite...

Once the door is secured and the electric fence is back on, the bobcat should move on. It's possible that it's a mother and needed food for more than itself. In some states, they're protected because they're becoming threatened due to habitat loss. I know that the last time I checked, animal rehabbers here in NC weren't even supposed to work with bobcats without special licensing, or at least that's what I was told.

I like your feeling that you intruded into his/her space. Please be careful of yourself, though. Always have that bear pepper spray with you, since you're out there alone. I always have my 9mm, but then I'm paranoid like that. lol Not because of animals, per se, but because of 2 creepy men that used to come around, asking to fish in my pond.

L
Something ripped a whole in my coop
2

2 murdered ducks, found only feathers and one wing bone

C
Flock eaten by a Bobcat, one survivor. Now what?