My parents have agreed that when we move that I'm allowed to get 2 geese but that if they attack mom that they will become meals. I told her that they'd be locked inside their secured yard but she thinks they'll find a way to escape. She said all geese are aggressive.
Anyway,

Honestly they’re all moody during breeding season. I wouldn’t get them at all if they’re gonna be killed because they did what geese do (which is attack when they feel threatened).

The sweetest geese I've had were Toulouse, but they got so nasty during breeding season...

besorto said:
The sweetest geese I've had were Toulouse, but they got so nasty during breeding season...
Click to expand...

Our feed store gets sexed so I'm only getting 2 females.
And to your other response, we currently have 2 ducks & 1 drake.

HuffleClaw said:
Honestly they’re all moody during breeding season. I wouldn’t get them at all if they’re gonna be killed because they did what geese do (which is attack when they feel threatened).
Click to expand...

I said they'd stay in their secured yard but my mom thinks they'll escape despite the fact that we use netting over our yards.

I used to have this trio, one gander plus two females. The females were very friendly, come when called, and ate out of your hands. The two females was one, a Sebastopol Embden mix (Blizzard) and the other was a Tufted Roman Embden mix (Dinosaur). The gander (Comet) was mean during breeding season, but off season, he was friendly, too. I wouldn't suggest a gander for you. Comet and Blizzard couldn't fly and Dinosaur could, but didn't realize that she could. Might I add, both Comet and Blizzard took the side of the Embden. There was a lot of time spent with them since we got them as juveniles. I had another female who was the same mix as Comet and Blizzard named Jennifer. I got her sometime later. She took the size of the Sebastopol, didn't have the time spent with her and wouldn't eat out of your hand. She got mean if you got in her space. I would hold all these geese. Comet and Blizzard looked like you could cuddle with them, but it was Dinosaur who was the best to be held, and was a favorite to younger children. She was good all the time. We had these geese as pets and watchdogs. As soon as they were re-homed, stray cats overtook our property. Cats were scared of their warning hisses. Not all geese are mean, and in fact, I had a meaner drake than a goose. I kept my geese inclosed by hog panels. It was only during breeding season when the gander would try climbing the fence, other than that, there was no problems.

I hand raised a pair of Exhibition Toulouse from 5 days old; They're supposed to be a very docile breed and from what I understand a good rule of thumb is the bigger the breed, the more docile they tend to be. My boys will sleep on me, let me stroke them and pick them up and we even go on walks together - they'll just follow me because they have imprinted.

A large part of having a friendly goose is being around them a lot as youngsters, handling them and socialising them with as many humans as you can.

It's pairing season at the moment and even though my geese are generally very pleasent Norbert will sometimes bite my hand when I carry his bucket around or nip me in some other way, but this is hormones and he can't really help himself - this is just the way of the goose - If your mum is serious about him becoming dinner if he attacks her then i'd seriously consider another animal instead because even the most chilled out goose will probably give you a cheeky nip if they feel it's necessary.

Otherwise, no, geese get a bad reputation for being horrible but it's simply not true.

In my opinion ducks are sooo much more friendly and wayyy cuter. My favorite breeds are Khaki Campbell and Pekin. 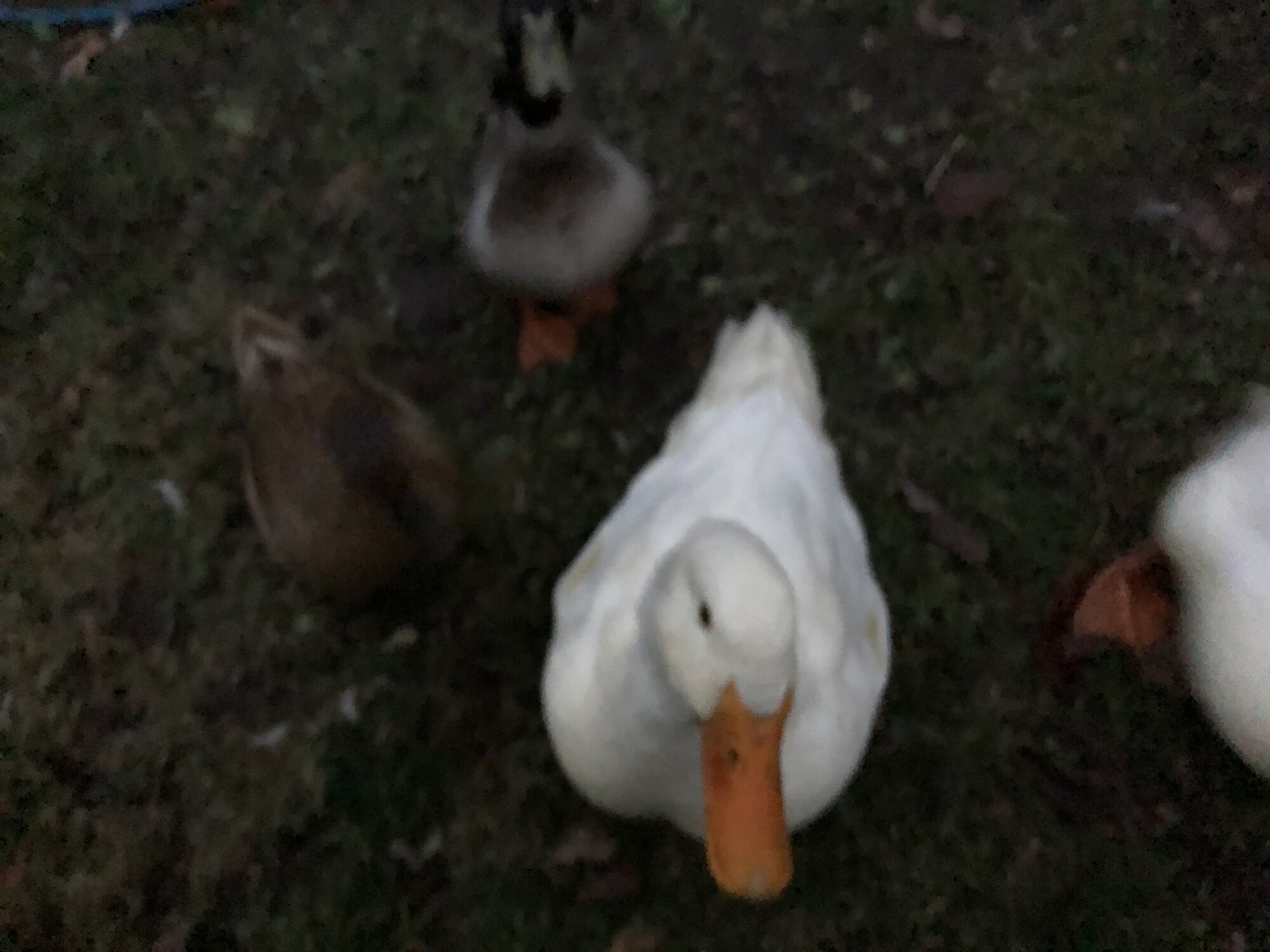 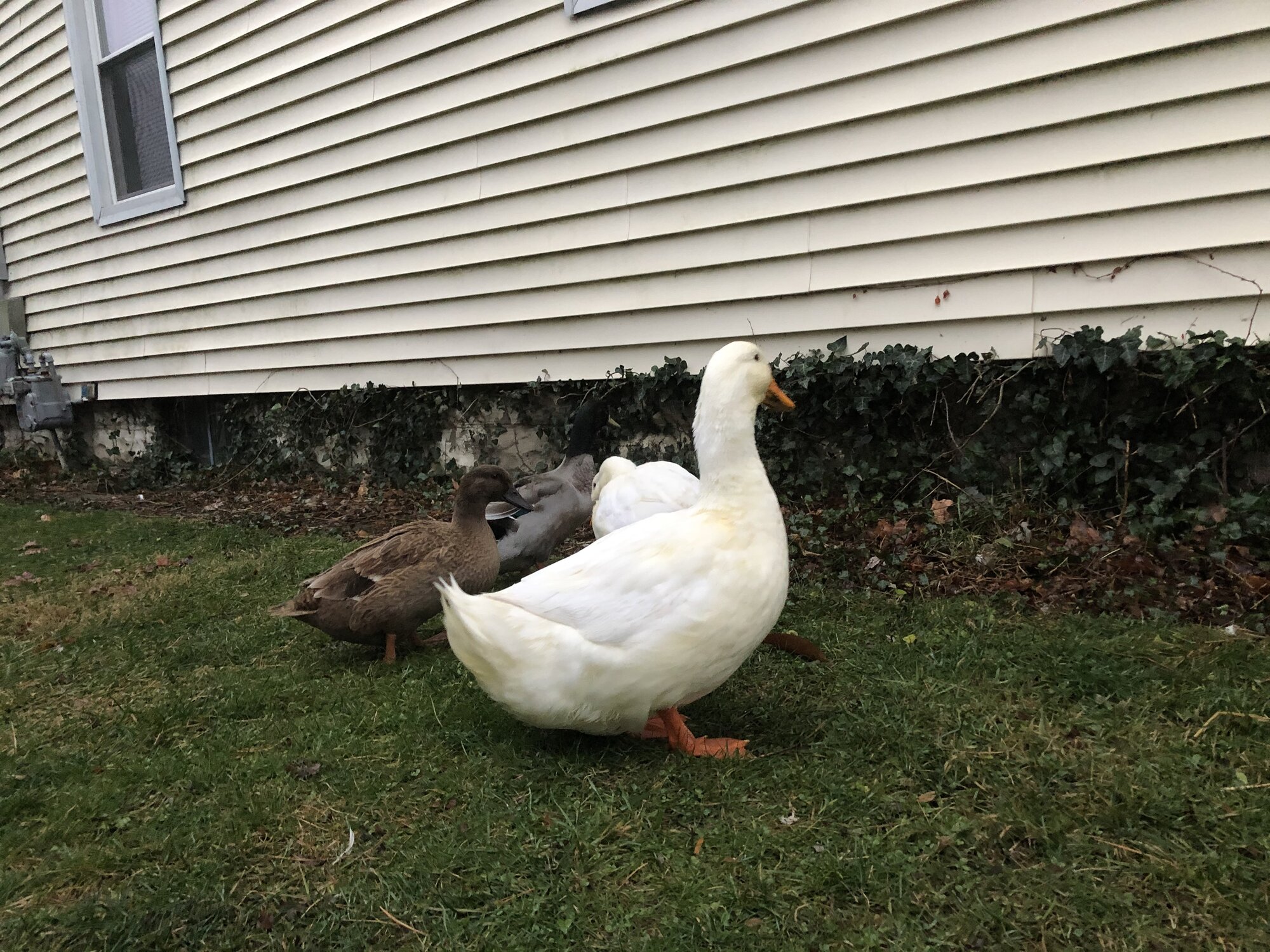 The white ones are pekins and the brown one is a Khaki Campbell. The gray with black is a Rouen but he isn’t that friendly.However do NOTget the Canada goose because they are mean. One time I was walking my ducks to the lake and thatgoose was there it got mad. flew at me and then started following my ducks. Everytime we are there with them something bad happens.One time he was going to attack us so I started running home with my ducks and it started following us and now it knows where I live and he/she likes to visit and scream at my ducks.

My only experience is with American Buff geese; I got the last two goslings at the local feed store and lucked out that they were both female. Gussie and Golly are sweethearts. Yes, they will occasionally hiss, but they big scaredy cats at heart.

They will occasionally peck at a lone chicken, but if two or more chickens approach them, the goose girls run off. Once in a very great while, one will take a single nip at a chicken if treats are involved. They do like to herd the runner ducks, making the ducks run ahead of them for no apparent reasons; it ends as quickly as it begins.

They explore everything with their mouths, which incudes me sometimes, but they're not nipping me, just checking me out. They're not clamping down hard.

Initially, I thought Golly might be a male because she got very protective when Gussie laid her first eggs. Then, Golly began laying, too. She's always been the stronger personality and apparently just wanted to guard her little sister.

I can, when necessary, pick up the slightly smaller Gussie without incident. She will, obligingly, lay her head on my shoulder and let me move her. When I have to relocate Gussie, I can expect much more resistance, and often, a wing to the face as she tries to escape.

Since you already have ducks, you know how messy waterfowl can be and bigger birds mean bigger messes. Mine cannot resist the urge to bathe in any and all water, including the others' too-small water dishes.

But they are beautiful and have tons of personaility.

Gussie and Golly can achieve liftoff, but are only able to stay airborne for a few second, mostly doing zoomies down the driveway. When they want to cross the 2-foot wire fence meant to keep ducks from going astray, they don't so much fly as they just walk over it and bend it to their will.

I hope you get your geese and your mom learns to love them.

T
Will a goose try to mate a gander?

B
Goose momma of 3,wishing I knew sex