This is one of three Barred Rock pullets I got at TSC. She's about a month old. They went to the big coop three days ago with a huddle box inside a crate. I've put them out every morning into a crate that is safe for them.

This evening, I was taking them 2 at a time (I've got a total of 6) to go back into their inside crate. They all decided they were coming at one time and rush the door. They knew dinner was waiting. I managed to gather 5 of them, but this little miss decided she wasn't waiting around and headed for the leftovers of the grown ups. Perched herself right there on the rim, starts pecking into the bottom. No worries.

Well for her, for me I was trying to keep the 5 in my hands from falling out, keep an eye on the boss GCM hen, the big GCM roo, (they are just out of shot in the pic) not step on the 5 juvie BLRW's and make my way into the coop to deposit the handful. All went well. I put the handful into their crate and took a seat to watch little miss.

I want you to know she stayed there a good 5 mins, she'd peck and look, she had no fear of the big birds at all. They were kinda stunned I think. Big Roo had put a popknot on one of them the first day, but has since ignored them. Boss hen, who is sincere about being the boss, is the first to run everyone else away from the food. Neither one of them bothered Little Miss for that five minutes.

Then, Big Roo took a step towards Little Miss. I poised for action. BigRoo is still not sure of me, so he keeps a sideways eye on what I do. I stood, hands on hips, giving him the stink eye. He decided not to cause a scene, after all, he's the new guy. Boss hen though, stepped toward the chick, gave a bit of sound and snaked her head out. Little Miss decided that while she might be big enough to take on the roo, this hen meant business. So, Little Miss decided she had had enough of being a grown up for the day and came a runnin, a flappin and a cheepin. 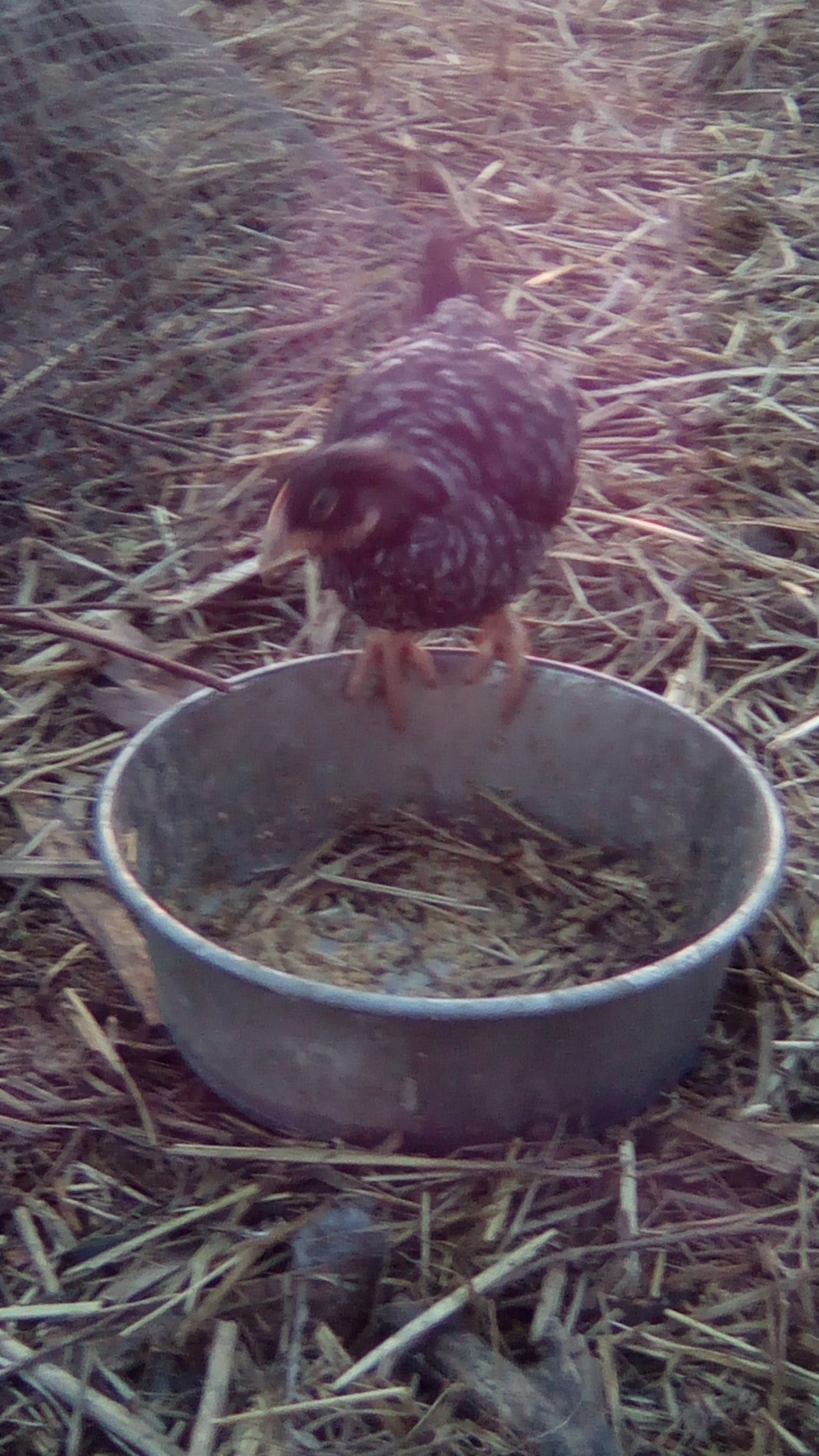 She is now tucked in with her sisters, but I see in her eye the sentiment "One day, I'll be boss hen".

I’ve had this happen.

It is fun to watch! The youngsters, especially the cockerels, think they are hot stuff. Then they meet the adults, who are happy to correct the little whippersnappers.
Mary

The first I got was 4 mo old BLRW's, 4 hen, 1 roo. Jr. Roo was just beginning to realize he was "The Man" when I got the GCM's. One roo, 2 hens. All three of them immediately became the top level. Poor Jr.Roo, his ego was wiped out lol. But that one hen even bosses BigRoo.

She might be head hen of her crew but I don’t know about the whole flock,seems to be how all my flocks do.They have flocks within the flocks (Usually hens they grew up with),then whoever needed being the dominate hen in that group rules their little group while I had a hen who rules over everybody with my rooster being at compete top

Family groups do tend to stay together for years within the flock.
Mary

I just hope if she grows up to be head hen, she's broody. That to me is a dual purpose bird lol.

I value my broody hens, and keep them forever. It's a tough job, and I've lost several bantam broodies to predators when they are out with their babies. Free ranging is great, but not when disasters happen.
Mary

Mine are going to be paddocked with 6 ft fence. I have too many predators and since I am going to develop a breeding program, I don't want any of my foundation stock taken. Coop will be FtKnoxxed too lol. And I have dogs for the daytime, will hot wire it for nighttime. I'm thinking of getting a kitten for the chickens, have it live out there and catch mice etc.

My last lost broody was likely to a hawk. The little birds are much more vulnerable to hawk predation.
Mary

Ever see a roo trying to protect a hen from another hen?