Is there a book or class that has helped anyone on genetics? I have searched lots of threads here on certain genetic questions but just feel more lost than where I started seems like there is a lot to learn for a beginner???????

I don't know about books, but we are learning a little about genetics in my 7th grade science class right now, and I can give you a quick summary of what I have learned so far.

So, what I have taken out of it is that there are dominant and recessive traits in a person/animal. Dominant traits will always show up if they are present, and recessive traits will only show up if there are no dominant traits that counteract them. For example, if I have one blue eyed trait and one brown eyed trait, I will have brown eyes because the brown eyes are dominant. However, if I received two blue eyed chromosomes from my parents, I would be blue eyed because there is no dominant trait present. This is a punnett square. 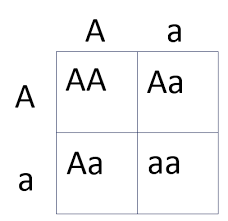 The uppercase and lowercase 'A's represent the two traits you receive from your parents. (Any letter can be used to describe one trait) The capital A represents the dominant form of the trait, and the lowercase a represents the recessive. How this square works is that on one of the outer sides, you see a capital A and a lowercase a. This represents one parent, who is heterozygous, because they have a dominant and a recessive form of the allele (Trait). Someone who is homozygous is someone who has two forms of either the dominant or recessive allele. So they would be represented as either AA or aa. Heterozygous is represented as Aa. (Capital letter 1st). So, both of the outer edges represent the parents, and the inner boxes represent 4 possible offspring. Know that the punnett square is not always accurate, it just provides a probability of what the offspring will look like. For example, if the 'A's represented blue eyes and brown eyes, 'A' being the dominant brown and 'a' being the recessive blue, then these parents would have a 25% chance of their child being blue eyed. Because whenever the capital 'A' is present, the child will have brown eyes, the dominant gene. This image demonstrates what I have been saying.

To set up the chart, you would have to know the parents' alleles.

The base of this research came from a priest, Gregor Mendel, who was working in his garden when he realized that purebred tall pea plants and purebred short pea plants always had tall *offspring (Tall being dominant) *We will call them 1st generation. He then realized that about 25% of the 2nd gen was short. This is because even though the 1st generation was tall, they were still carrying the short gene, which when combined correctly, produced about 25% short offspring in the 2nd generation.
Vocab:
Heterozygous- Something who has two different alleles (Dominant and recessive)- represented as Aa.
Homozygous- Something that has two of the same alleles (Either two dominant or tow recessive)- Represented as AA or aa. (AKA purebred)
Allele- A form of a trait that you may or may not see. Represented as 'A' or 'a'.

I hope this was helpful, if you have any specific questions or you are confused about anything (Which I'm sure you are based on my explanation abilities

) Just ask and I will try to clear it up for you.

Relating this to chickens:
The crest on a polish chicken is a dominant gene, so if you breed a polish chicken to a non-crested breed, the chick would very likely have a crest. This is my understanding of it, at least. There are traits where they will both show up in the offspring as a kind of mix, but we haven't really talked about those in class and I forget what they are called. Anyway that's it for now

The only good genetics books I can think of are textbooks or "The New Rabbit Handbook" which has a very good, if somewhat old, section on genetics. You might want to try reading some registration breeders websites. Chicken and rabbit people in particular tend to keep charts of what does what. In absence of that, this site is good for color combinations.
How genes work:

You inherit DNA from your parents. That DNA is packaged in chromosomes. Those chromosomes are contained in the nucleus of the cell. When the cell need s to make new proteins, a strand (allele) of chromosome unwraps. That strand has a start and a stop point, and mRNA copies that DNA allele from the start to the stop. Then the mRNA leaves the nucleus of the cell. Once outside, mitochondria reads the RNA and translates it into a protein. That protein is the trait. People with brown eyes manufacture brown-eye-color proteins.

You have two alleles for each trait. One from your mother, one from your father. One will overcome the other. The one that overcomes is dominant, the one that is overcome is recessive. Blond hair is always recessive to brown, for instance. Dominant is represented by a capital letter, recessive is indicated by a lowercase letter.

If a person expresses a recessive trait, then that person has to be homozygous (f/f) for that trait, because any other trait would mask it.

Some alleles are incompletely recessive or incompletely dominant. We have a grey calf out in the pasture. Her father was homozygous black, her mother was brown and white with one (black-dominant/brown-recessive) parent and one (homozygous brown and white) parent. The alleles didn't mask each other. Instead, all of the colors were mixed together to form a brownish-gray mix.

Another class of non-mendellian alleles is additive alleles. Height is a good example. Height is determined by the parents--but it's determined by how their alleles interact with each other. Short people can come from tall parents and tall kids can come from short parents. That's not always--or even usually--the case, but it does happen, and it isn't genetically unusual.

Some alleles kill the embryos if they are homozygous. Curled tails in one breed of mexican dogs will kill the embryo if it is inherited from both parents. This is known as "homozygous lethal."

And finally, some traits are sex-linked. Men have X and Y chromosomes. Women have two X chromosomes. I'm making this very basic, but: If a trait is on the X chromosome in a man, then he will express that trait. Women, who have two X-chromosomes, have a much lower chance of expressing that trait because they have another allele that might be able to mask it. This is a huge advantage for women.

Think about it. If a recessive trait is dangerous to have--and many are--then the men who have it linked to the X-chromosome sill be in danger. That is why 49.5 percent of babies born in the U.S. are male and 50.5 percent are female. The girls aren't getting killed early by those recessive traits.

In a side note, Baldness is sex-linked.

Inbreeding is dangerous because it gives the offspring a much higher chance of being homozygous for a rare recessive allele. That might not sound like a big deal, but remember all the trouble the Russian royal family had with blood clotting? How the heir to the throne nearly died several times because he just kept bleeding? He was homozygous recessive for hemophilia. Brother and sister are hugely likely to contain the same dangerous alleles if there are any at all in the family line, and if they have children, one-quarter of their children should express that dangerous allele. This chance goes way up if inbreeding has gone on for more than one generation.

It's also, incidentally, the reason behind a lot of the stupider-looking dog lines. And also behind fainting goats.

Outbreeding is when you breed an animal to another animal that is so far genetically removed that it probably was raised in another country. They share few of the same alleles and have no tendency for dangerous recessive trait expression.

And birds, incidentally, have two W sex chromosomes in males and one W and one Z chromosome in hens.
Last edited: Jun 17, 2017

Also, a single allele can make more than one trait, and some alleles that are really close together on the chromosome are more likely to be inherited together. Like black skin and crinkly hair in humans.

Try http://www.chickencolours.com the author , Sigrid Van Dort, has written two Fantastic books on genetics. easy-to-understand for the beginner with lots of pictures.
the first one is ,"the genetics of chicken colors the basics" ; the second one is "the genetics of chicken extremities". The first half of this book is explanations with pictures. the second half is a stupendous color atlas of chicken colors .the photos are captioned by the genetic formula of that color . it's an absolutely fantastic reference.
the second book covers everything but chicken colors. they're expensive I agree. chicken breeding books tend to be more expensive than dog breeding books. However, the author has done a wonderful job of making them easy to understand .there are lots of pictures and diagrams and they are well worth the money.
Best,. Karen

You will also want to buy the " American Poultry Association Standard of Perfection". it is for chickens like the AKC Dog Book is for dogs. it carries explanations and pictures of all the breeds . the first 40 pages are absolutely invaluable in learning how to properly breed a chicken. it is $59 and can only be bought from the American Poultry Association. do not buy old versions of this book online many of the standards have changed a bit . all of the reprints are illegal because the APA never gave up its copyright on its book. plus the old reprints are OCR's and have many mistakes and unreadable sections in them.
Best,
Karen

Thank u so much

Genetics, where to get started?