About 21 weeks ago, I purchased 8 straight run bantam silkies from Tractor Supply. Now, I know that when you buy several straight run chicks, you're probably going to end up with SOME roos, but here's what's happened: I lost one chick within the first couple days of purchasing, so, down to 7 chicks. The rest all made it all these weeks. One day, a couple weeks ago, I started hearing crowing. I watched and caught 2 culprits in the act! After several days of trying to figure out what to do with them, I found a friend that lives on several acres and doesn't have to worry about neighbors, so away they went. THE NEXT DAY, another one started crowing! I figured out which one it was, and gave him to the same friend, and if you're doing the math, that puts me at 4 silkies. That brings me to yesterday. I didn't hear anything all morning, so I was so glad to finally be in the clear and not have to worry about neighbors possibly calling to complain about the noise. Then, around lunchtime, ERRRR RRRRRR RRRRRRRRRRRRR!!! The sound almost made me cry!!! NOT ANOTHER ONE!!!! Sure enough, when I went out to check, there he was!!! Standing in the middle of the run, chest puffed out, just crowing away! So, off he went. I had decided that I was okay with the ones I had left because it just happened to be that I had one of each color - black, gray, and white. This morning, however, there is YET ANOTHER FREAKING SILKIE CROWING - the black one, and I'm so nervous that as soon as he goes, the white one is going to start in because that one seems to be quite a bit larger than the gray one... roughly the same size as the crowing black one, if I'm being completely honest!!

So, all that to say: could you look at these pictures of my one remaining white silkie, and tell me if you think it's bound to start crowing and I should just take it to my friend the same time the other one goes?!?? Am I really going to have only 1 out of 7 silkies that I actually get to keep?!?! 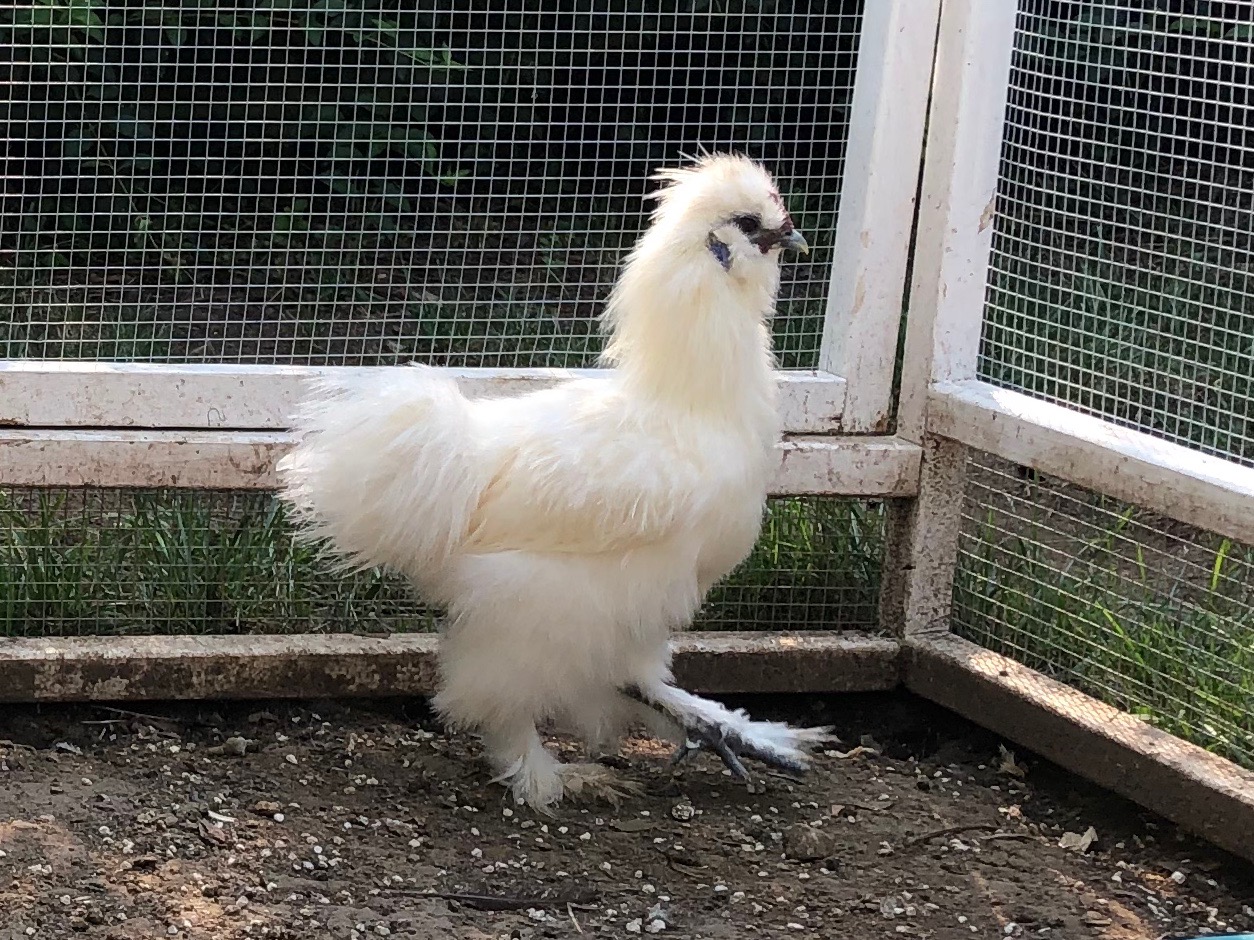 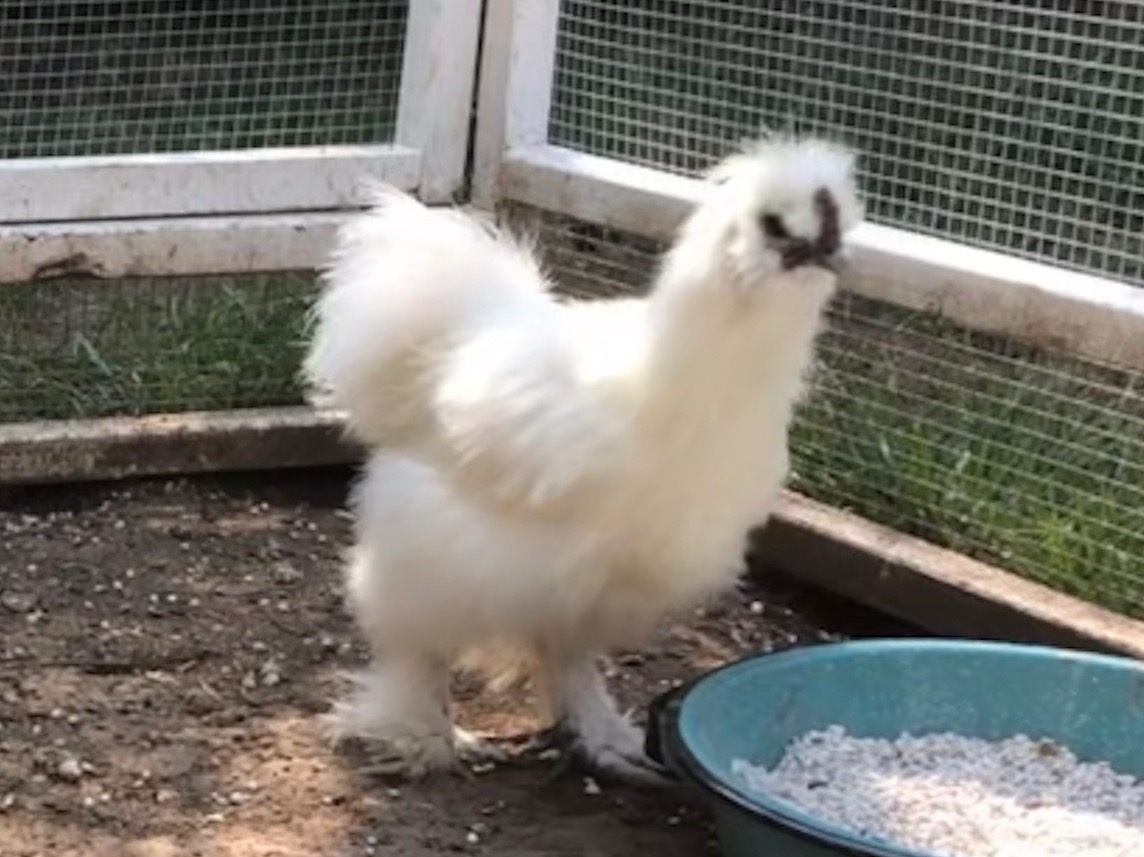 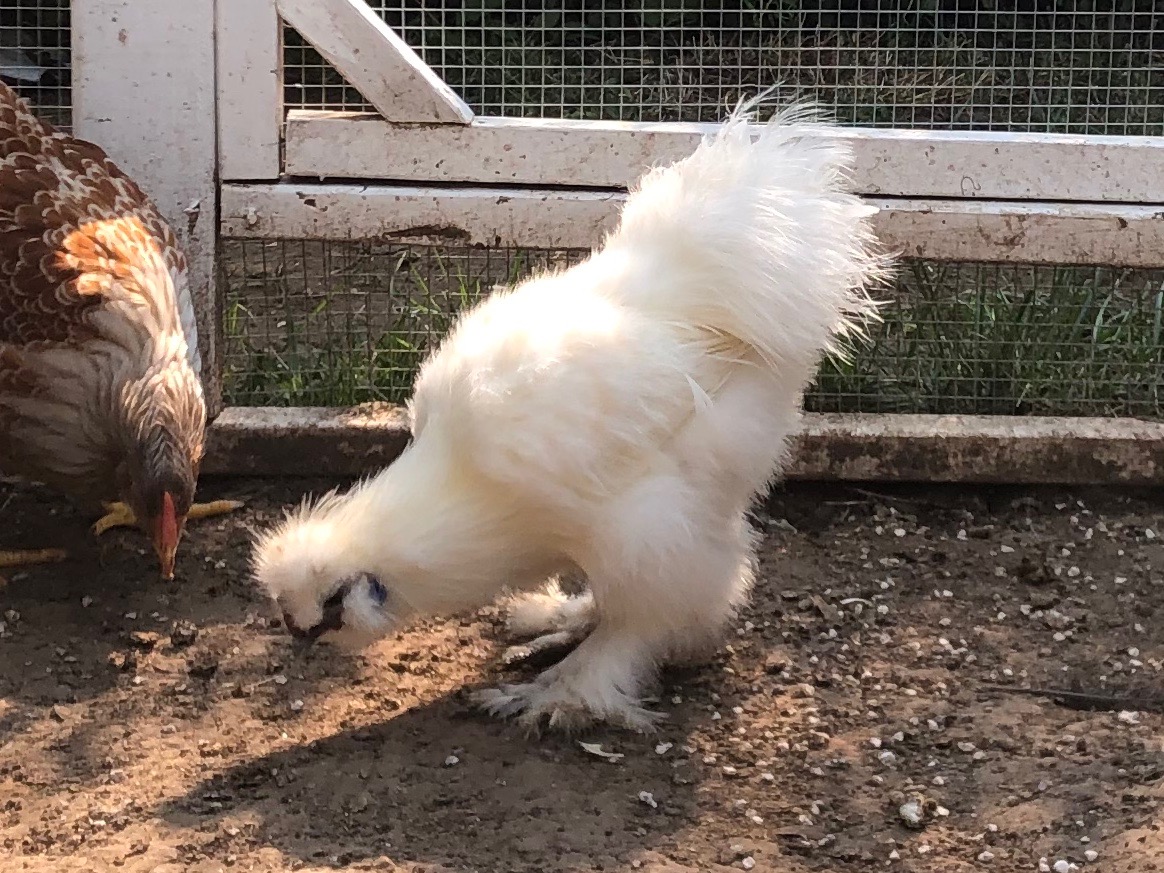 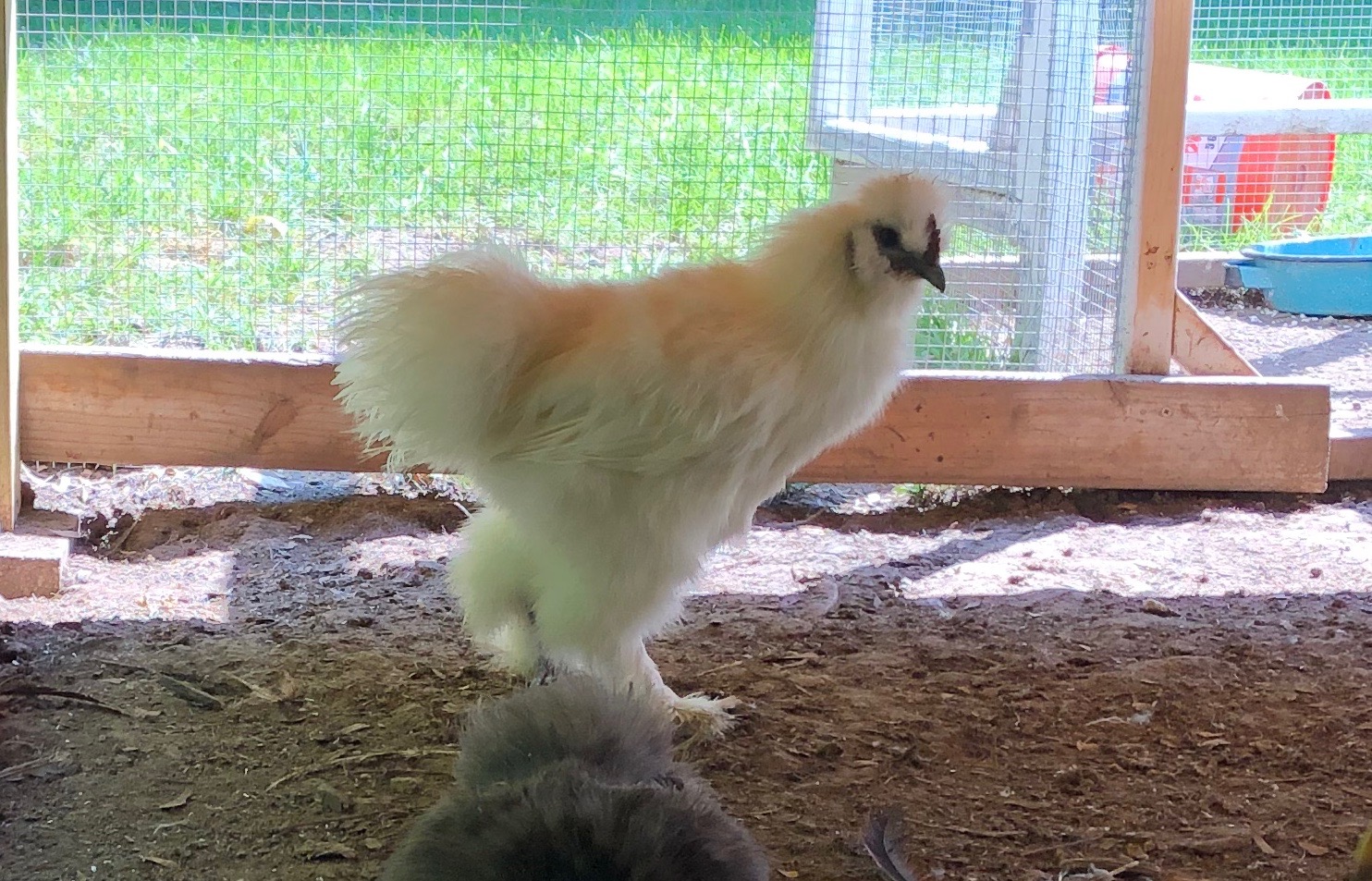 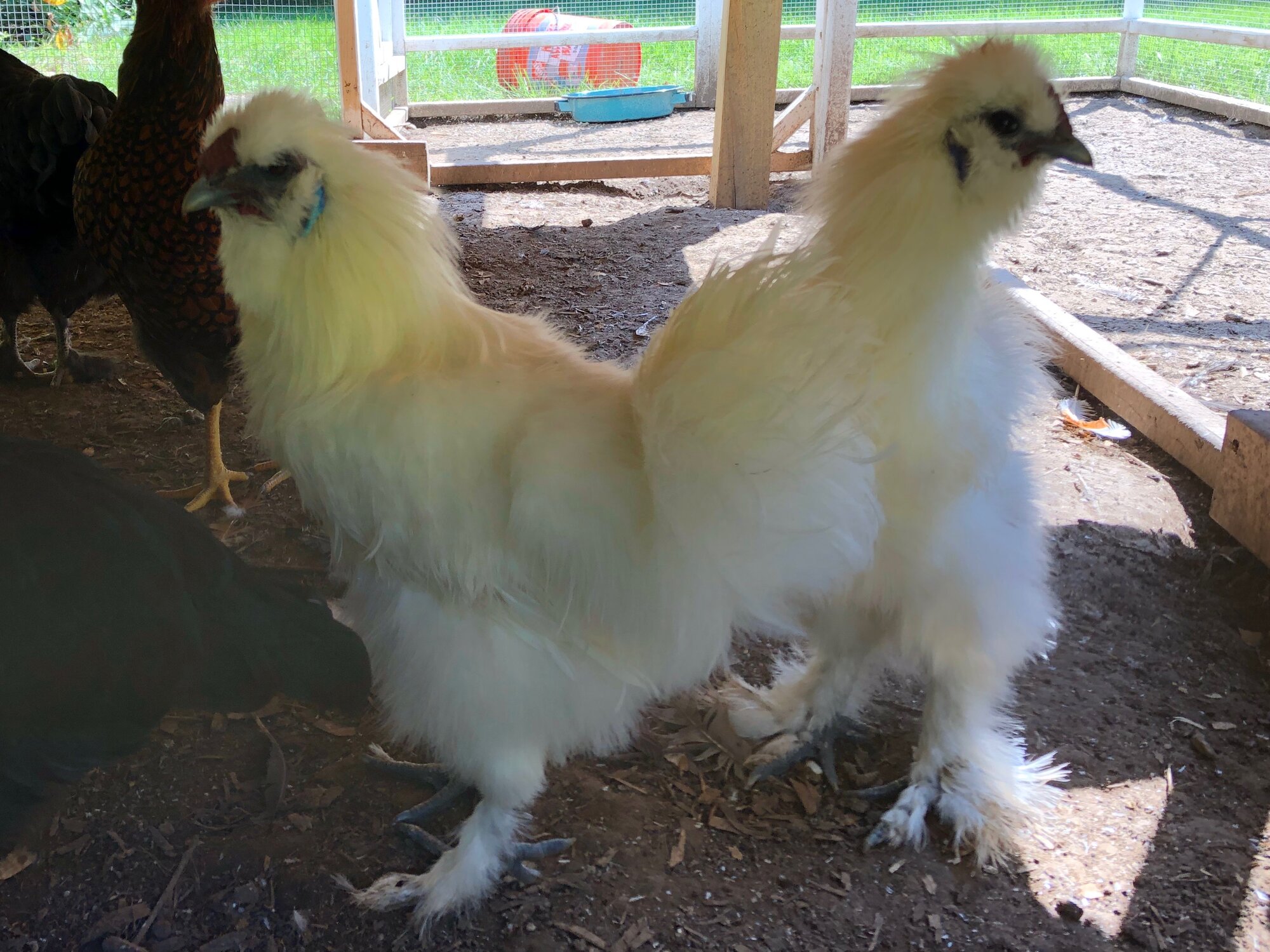 Silkie on the left is the one I got rid of yesterday, on the right is the one in question.)

Kinda looks male to me but I'm bad at silkies. That head appears to have streamers though

I would say both cockerels. Sorry!

Straight run is always so interesting, often not in a good way! I've had four out of five cockerels, and another time, two out of eight cockerels. Guess which made me happier?!
I'm sorry this is happening, but it does. Hope your friend wants more of them, and has a good plan too.
Mary

What you posted are Cockerel. Both white ones.

I really think when the hatchery determine sex, they send a good majority of the roos to tractor supply and other farm store for the straight run bin. Several people I know have had nothing but roo's with an occasional pullet mixed in.