Got my first 2 egg's today..but NOT from my layers 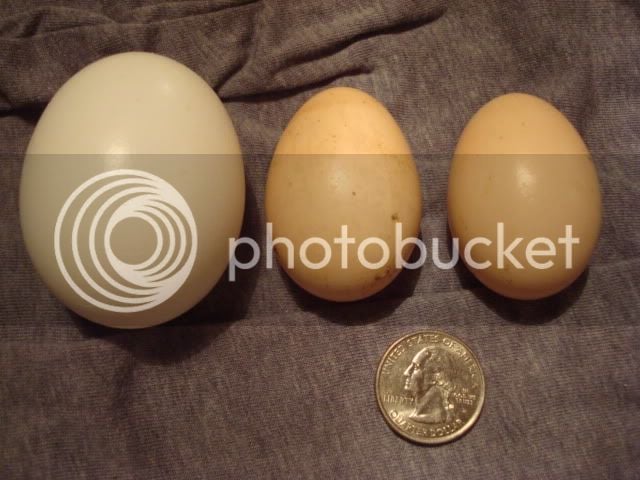 Well well WELL!!! Late last night my 26 week old "SQ" White bearded silkie named "Bella"...layed her very first egg!!!! How excited i was when i found it around noon today. So, i go into town and come back about 8 hours later "town is 1hr away and my g/f was shopping

" I get back and bam!! Another egg!!! What a good little girl she is!!! It was very warm so i know she must have layed it moment's before i got home. The white egg on the far left is a store bought Large egg i pulled out for comparison.

Really i was surprised at my silkies egg's, i thought they layed white eggs...not peach colored ones. And another thing...she layed 2 eggs in ONE day!!! WOW i was told silkies are not "all that great layers" I was expecting soft or small or squishy egg's...but nope..none here. She has a pen all to herself with her boyfriend Ceaser...a one year old BEAUTIFUL D'Uccle rooster. The poor girl didn't know what to do when i picked the first one up and put it back down...she pecked at it to be honest. But i think that was mostly due to the fact they had ran out of food for a couple of hours and she was VERY hungry so when i put down the egg she pecked at it. Bella does not have a nesting box at the moment, so i found the eggs just randomley laying around the pen i have her in. Soon she will be moveing on up.."to a DELUXE appartment"........in the sky......

I noticed one of the eggs has very small clear spot's that are allmost translucent. You can just beaaaaarrrrly make it out..it's the egg on the left. Does this mean anything?? I incubated a few shipped eggs that had the same thing and they were not fertil. I have hopes of takeing these eggs and fireing up the bator on monday!!!! What are the odds do you guy's think my boy ceaser could of been getting to her?? It's just the two of them inside the pen. Well im done ranting, i look forward to seeing many replies!!!
Last edited by a moderator: Oct 1, 2009

Congratz On your first eggs!!!!

thanks! still looking to get a few of my question's answered tho

That's unusual to have two eggs in one day! She might have been having some trouble getting the first one out. Yes, the eggs are probably fertile. If they look nice and solid, decent sized, you can try incubating them. If the one egg seems to have a "hole" in it, don't use that one.

That's unusual to have two eggs in one day! She might have been having some trouble getting the first one out. Yes, the eggs are probably fertile. If they look nice and solid, decent sized, you can try incubating them. If the one egg seems to have a "hole" in it, don't use that one.

what do you mean by hole??​

any more help guy's?? im DIEING to learn as much as i can.

Look here . There are great pics of fertile and infertile eggs. It should help you figure out the answer to your question.

Congrats on the first eggs. I was surprised at the color of silkie eggs too. I got my first ones through the mail, and was surprised to open up a box of tinted eggs instead of white ones.
J

Quote:
im experienced with hatching eggs and checking for fertility so that's not the problem. thanks tho

Pullet sitting in the nesting box with no eggs

J
Is my pullet broody?
2