Pinning the plastic net down with landscape scales defeated the escape artists for half an hour before dark tonight.

They're too fast to get good pictures but here are a few shots nonetheless: 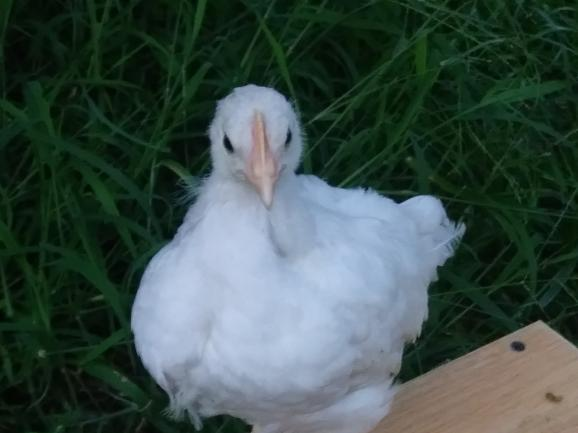 Girls in the grass: 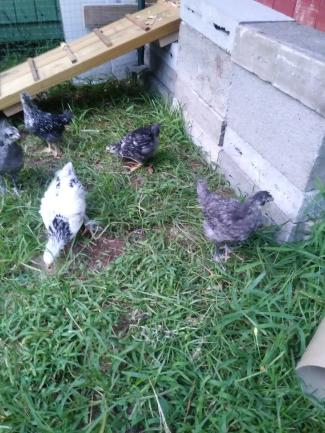 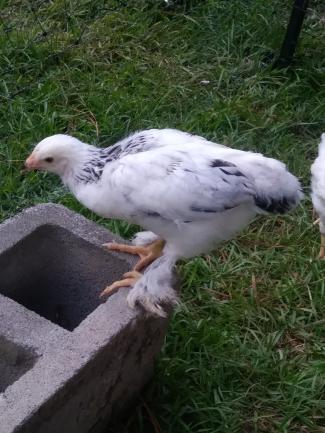 Girls in the grass again: 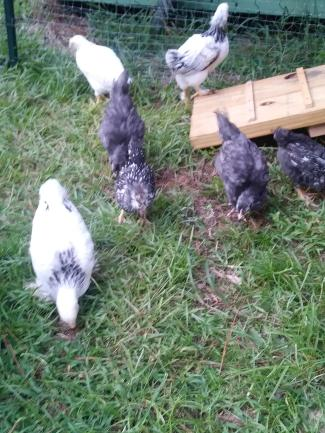 It wasn't as much of a rodeo to get them in tonight. As it got dark they seemed distressed to not understand how to get back into the coop. I managed to herd a couple of them up the ramp, the others had to be picked up and put back in.

Our chicks are about the same age. I did like you and got an assortment of 4 different breeds. They’re fun but one chick rodeo was enough for me. One got through the fence and into the big girls’ run. I was scared they would attack but they actually just avoided the baby and went on their way to the other end of the run. I put pieces of tin along the bottom of the fence until they get a little bigger and don’t fit through the holes in the fence.

Last night the outside time went very well. My 14yo and I sat in the run with them as they went around nibbling grass and exploring the piles of pine straw we'd given them to scratch at.

When it got dark enough they went up on the cement blocks outside the pop door to try to roost for the night but when I started catching them (and, HORRORS!, photographing them), the rest decided to scoot into the coop where I couldn't reach them.

This morning I was a mean mommy and took their chick waterer and chick feeder out so they'd have no choice but to use the nipple waterer and the no-waste feeder. No-waste feeder is still a bust -- they just dug a big hole to find some of the feed they'd been dumping into the bedding.

But when I opened the nipple waterer the level had dropped significantly.

Earlier this week I'd had the idea to wedge a dried mealworm under each nipple for few days on the theory that when they got the mealworm they'd notice that it was wet there. 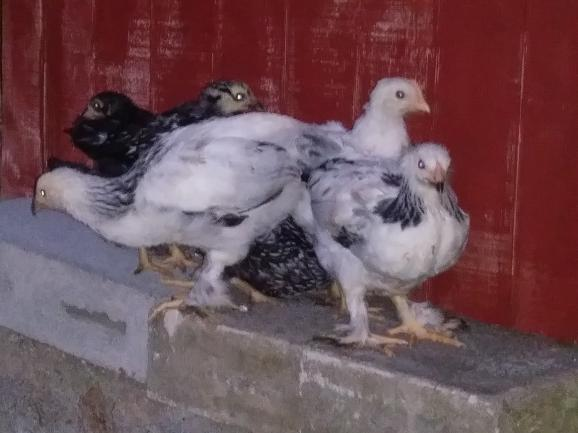 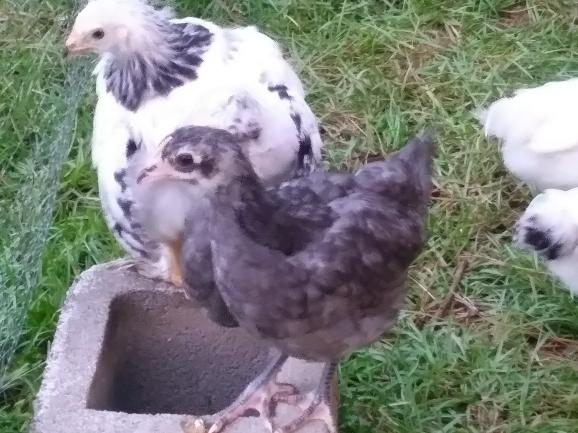 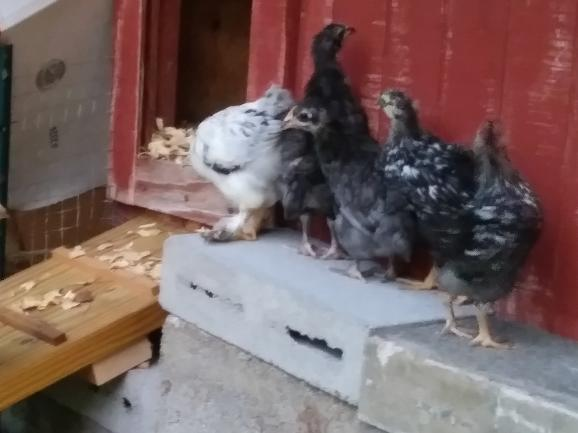 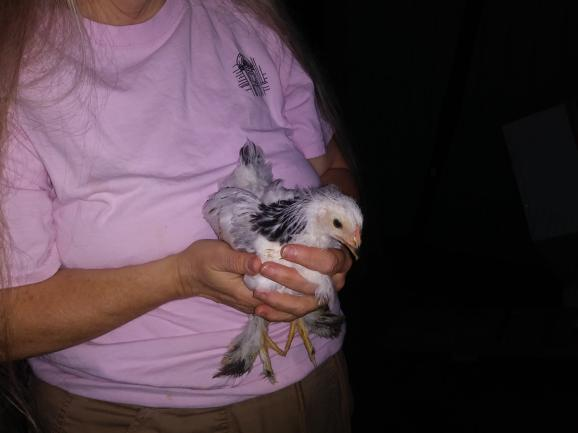 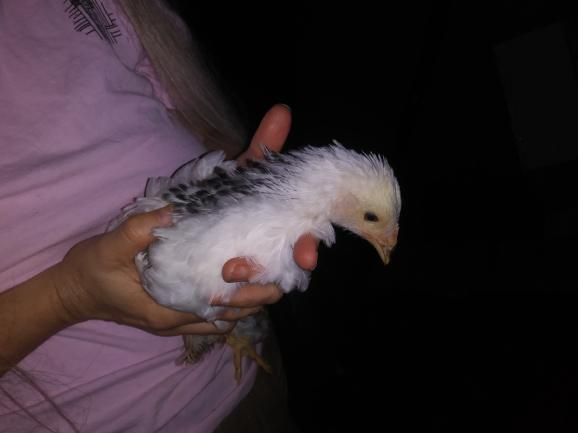 I'm not 100% sure if I caught one Wyandotte twice or each one once. One has a purple comb and the other has a pink comb but the flash makes it hard to tell. 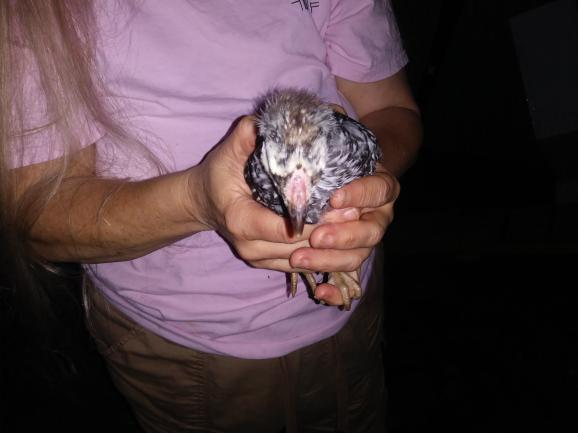 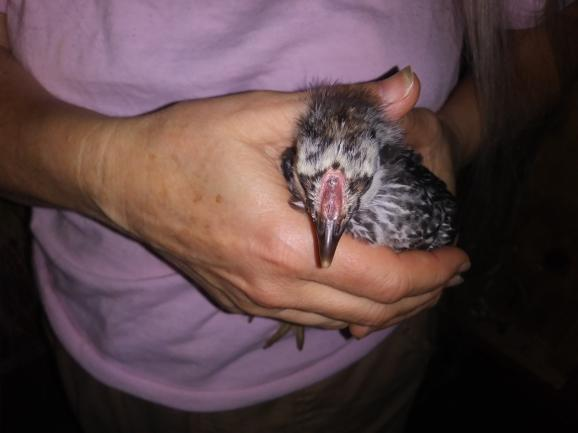 P.S. The Brahmas are 7 weeks and the others are 5 weeks.

We're out in the pen again letting them have their time outside before dark.

Dumpling has found a palmetto bug and enjoyed a tasty snack without her sisters attempting to snag it from her because they were busy scratching at some pine straw.

I am nowhere near ready to leave them out here unsupervised because I haven't found a treat they like well enough to come to my hands for it. I have to wait for dark to be able to get them inside.

No photos today because I washed my phone along with my darks load.

I made up a different kind of no-waste feeder, which might work except that it's too light so they dumped it in no time flat. *sigh*

They were rather rowdy during their evening playtime outside, flapping and running all over. I don't know if they're getting more confident in their pen or if it was the wind, which was kicking up from time to time.

I didn't let them get stuck outside tonight but herded them in gently. A couple needed to have the little fluffy tails given a slight push, but they're getting better about it.

When they were first out one of the Brahmas, I'm not sure which, was making a cute, little trilling sound -- almost a musical purr. It was quite adorable.

They picked a nice spot below the access door where I'd trampled the grass dead caring for them, dug a hole, and had a good time. All except Chipotle, who stalked around them pecking the ground and seeming not quite willing to relax.

I kept hearing a trilling, almost purr-like sound but wasn't sure if it was the chicks or a nearby toad.

I miss my phone so much! I would so like to take a picture of Omelet, Popcorn, and Picatta stuffed into a dust-bathing hole hardly big enough for Omelet alone!

They're adorable when they dust bathe!

Despite being pretty good about going in at dusk the last few days -- after Omelet and Dumpling had been caught out afraid in the dark -- they decided to not go in as a group tonight.

However, I was able to herd them in, with only one Wyandotte deciding to turn around and try to go back -- getting picked up and petted for her trouble.

I'm trying to work up the courage to leave them out for several hours instead of just for the end of the evening. I need to put some hiding places into their yard.
You must log in or register to reply here.
Share:
Reddit Pinterest Tumblr WhatsApp Email Link