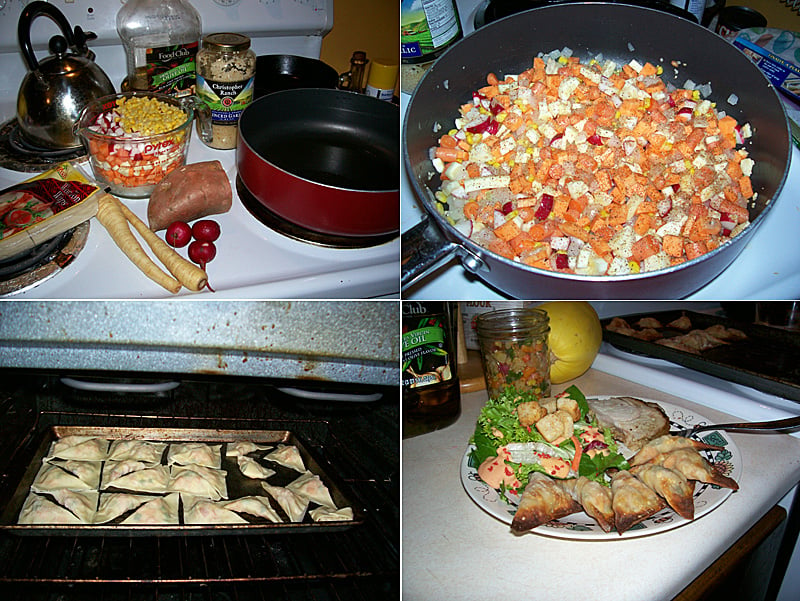 Most Won Ton fillings are meat based or cheese based, this is neither.. so I thought I would share this LOVELY veggie filling I use. They are sweet & wonderful and a bit addictive. They make GREAT finger foods & party snacks. The filling stores well in the fridge in a canning jar to be served in freshly baked in won tons, over sliced backed potatoes, home fries, thin crust pizza dough or over rice.

Harvest Vegetable Won Ton Filling
Everything should be diced small, no more than 1/4" pieces and be FRESH uncooked or frozen fresh. I like to fill up my 4 cup measuring cup as I dice & chop.

Saute ALL ingredients (minus bell pepper) in 3-4 tbs of olive oil over medium high heat until sweet potatoes begin to soften.. about 10 minutes
Sprinkle with salt, white & red pepper to taste and add 1/2 cup of sweet bell pepper and continue to saute until hot

Shape & Fill the Won Tons
Spray cookie sheet with olive oil or butter flavor cooking spray
Lay out Won Ton wrapper squares and put 1 tbs mound of filling in the centers and fold won ton to create a triangle pocket.
***Wet won ton edges slightly with water to seal closed
Spray tops of won tons with quick burst of cooking spray
Oven Bake @ 350* for 10-15 minutes until edges are golden brown & crispy... (note that in my photo the edges are OVER DONE..

This is enough filling for about 50 little pockets.

What is a Won Ton? It's an Asian (Chinese) noodle usually filled with meat and served crunchy or as a dumpling in soups. The noodle is often called a wrapper.
What is in a Won Ton Wrapper made of? Basically, flour, eggs, salt & water, it's like a pasta noodle but the dough is cut into approximately 4 inch squares.
How do you serve Won Tons?They are great snacks, side dishes & appetizers. You can also BOIL this won ton recipe instead of baking it, for a different experience. You can serve the boiled won tons in a bowl with a lovely sauce made from some golden squash, like ravioli with red sauce.
Where do I get Won Ton wrappers They are generally available in the produce section, or the open coolers with tofu, organic fresh foods, egg roll wrappers or near bean sprouts in the produce area.

Lightly beat the egg with the salt. Add 1/4 cup water.

Sift the flour into a large bowl. Make a well in the middle and add the egg and water mixture. Mix in with the flour. Add as much of the remaining water as necessary to form a dough. (Add more water than the recipe calls for if the dough is too dry).

Form the dough into a ball and knead for about 5 minutes, or until it forms a smooth, workable dough. Cover and let rest for 30 minutes. Turn the dough out onto a lightly floured surface. Roll out until very thin, and cut into 3 1/2-inch squares. Store in a plastic bag in the refrigerator or freezer until ready to use.
Last edited: Feb 24, 2010

That looks wonderful. We are trying to eat a little healthier and this looks like a good thing to try. Thanks for sharing!

I need to print this out naoooo!!!

We love wonton and eggrolls. Sometimes I roll them as Lumpia - a Filipino lady taught me to make them several years ago. You use wonton skins, but roll them in the eggroll shape.

We love to eat wonton fillings by the spoonful too. DH is never dissappointed when there's too much filling for the skins. LOL

Chicken & Dumplings! Show us your dumplings!