I'm not sure what's wrong but 2 of my 6 leghorns have died in the last week. I think another will be gone by tonight. I have one now that won't come out of the coop and is having a hard time walking. She falls forward and sits down. It's the same thing the other two did before they passed. I'm thinking maybe it's worms? I've been adding Apple Cider Vinegar to their water but now I'm looking for Valbezen and having a hard time finding it. On-line is takes 2 weeks. Any ideas what could happening? I'm heartbroken.

Oh my. I'm so sorry you are going through this.

It does not sound like worms. ACV will not treat worms regardless.
Can you post pictures of the sick chicken and any poop that she has produced?
How old are these birds?
How are they housed (pictures) and what do you feed them including treats?
Are the sick birds eating and drinking?

Hi
I'm so sorry for your losses. I can only imagine how gutted you must feel!

How old are they and were they vaccinated for Marek's Disease? The vaccine needs to be administered at hatch or in vitro and if you bought from a hatchery then you would need to specify that you wanted them vaccinated and pay a small premium.
Another possibility is coccidiosis. What does their poop look like? Age is also relevant in this respect.
The above are the two commonest killers of young birds and to be having several die in short succession it is likely to be one or the other. Worms will not kill several birds in such a short space of time.
You would be better getting come Corid (cattle section of your local farm store if you are in the USA, or look for a product that contains Amprolium if you live elsewhere) and treating them with that rather than trying to deworm them with Valbazen at this time.

There is no recognised treatment for Marek's, so you might as well treat for Coccidiosis and hope for the best. Treatment is 1.5 teaspoons of the powder or 2 teaspoons of the liquid Corid in a gallon of water made fresh each day for 5 days with no other water available. If they are not eating and drinking, as often happens when they are very sick with Coccidiosis, then a direct drench of the concentrated liquid of a couple of drops into their beak twice a day will help them fight it.

My gut feeling is that it is probably Marek's especially if they are adolescent birds at point of lay that were not vaccinated. Do they appear uncoordinated, like they cannot control their limbs or weak and lifeless. The former suggests Marek's, the latter Coccidiosis.
Are they keen to eat if you offer them food?

A photo of the sick bird and it's poop may help.

It would be best to get a necropsy done since you have lost more than one bird with the same symptoms. Where in the world are you located and we can help suggest a suitable lab that could perform such a service. Some states heavily subsidise these labs to protect the food chain, so it can be relatively inexpensive in some areas and it is import to know what you are dealing with when it is clearly a when you are suffering multiple losses.
M

I am located in Tewksbury MA. My daughter brought me the chickens home from Vermont in July. They are only a few months old. Where can I bring them for a necropsy? I don't even know of a vet around here that I can take them to. This is my first time having chickens. They have been healthy & happy until just recently. I'm sending my husband to Tractor supply now to buy Cordid and I'll try that today.

Photos of the birds and their poop?
What do you feed?

Below is a cut and paste from the Massachusetts Dept of Agriculture web page....

Presently there are no requirements for testing pigeons, doves and waterfowl for movement within the Commonwealth of Massachusetts . However other states may require testing of these species as an entry requirement.

The USDA Animal and Plant Health Inspection Services (APHIS), has established a surveillance program for Avian Influenza and Exotic Newcastle Disease - AI/END. Diagnostic services are available through this program at no cost to the flock owner.

Flocks experiencing sudden mortality, respiratory symptoms, or swollen heads should contact the Department as soon as possible for assistance in submittal of these birds to the laboratory for necropsy at 617-626- 1795.

Below are the pics that I just took of her. Her legs are splayed out to the front of her body and she has a hard time getting up. There are pics of a fresh poop she just did too. Whatever anyone can tell me would be so helpful. Thanks! 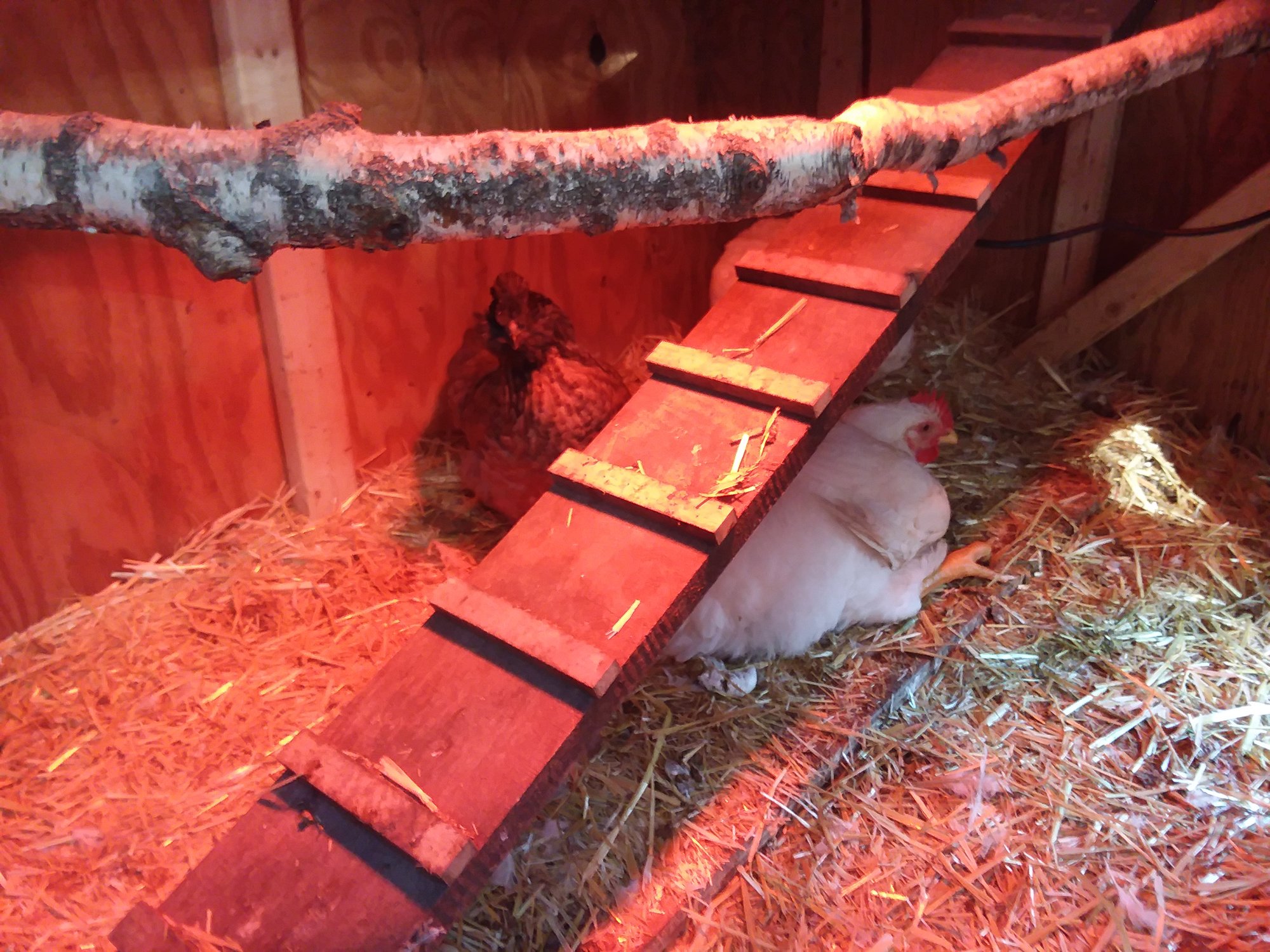 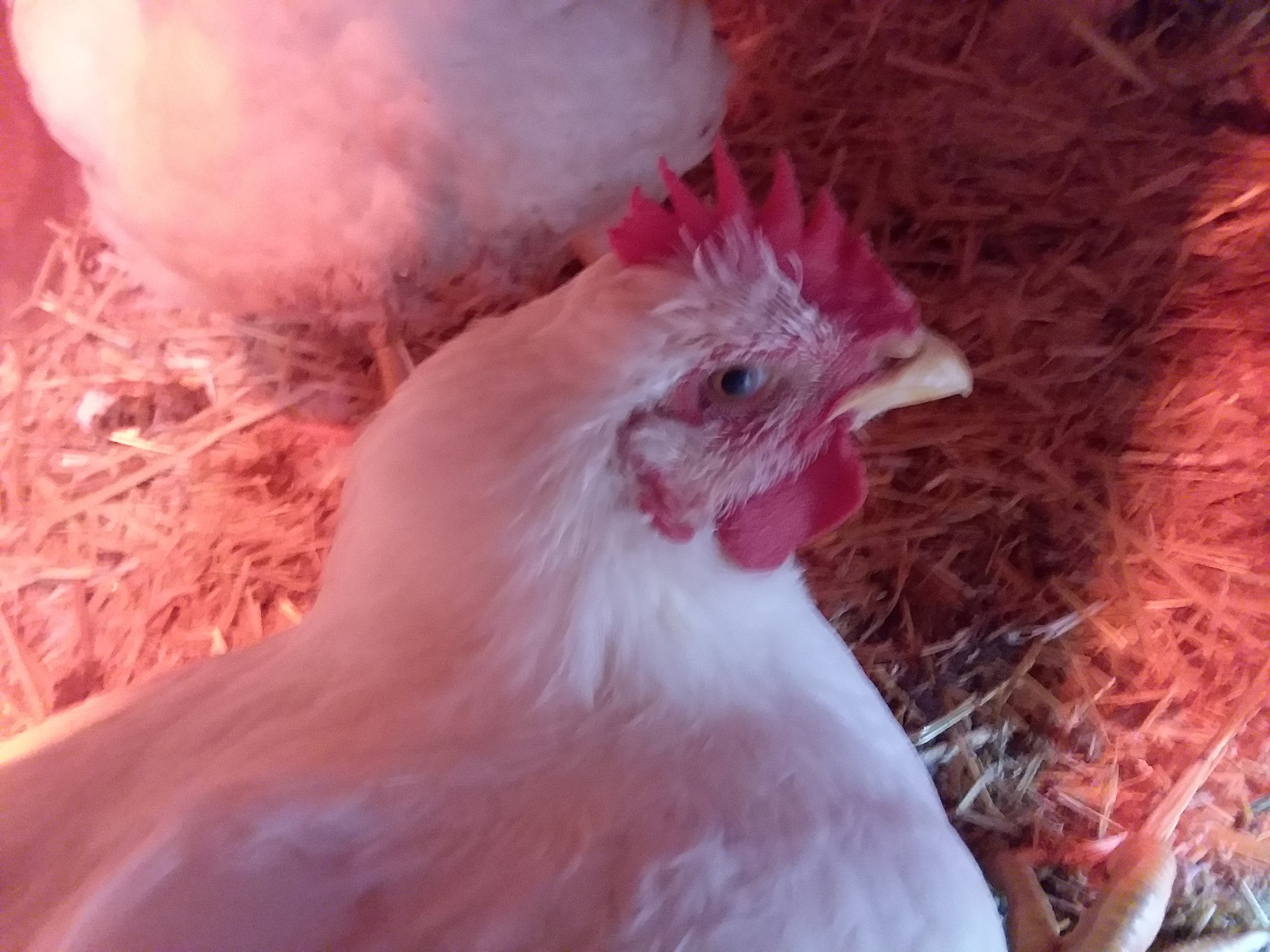 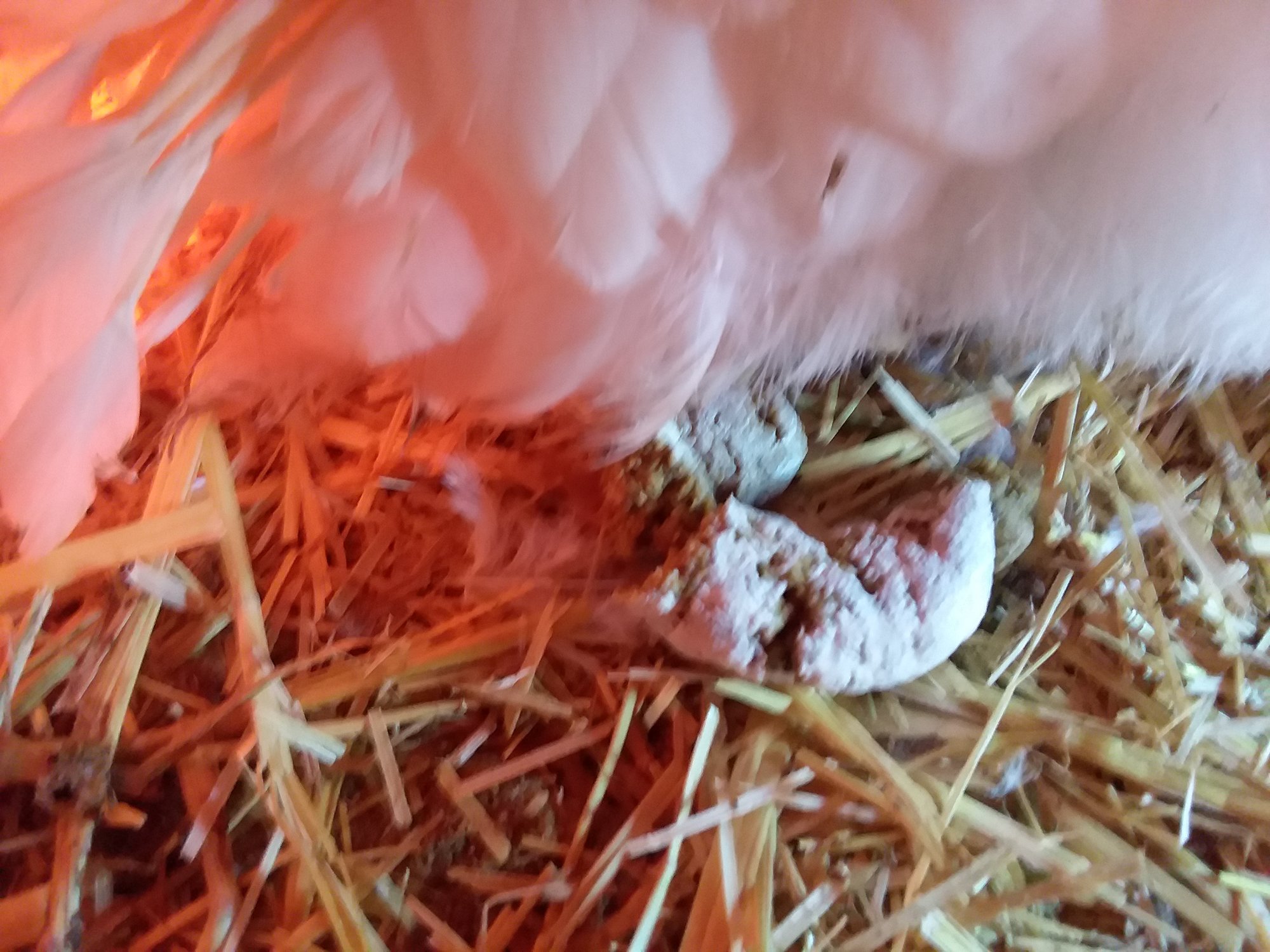 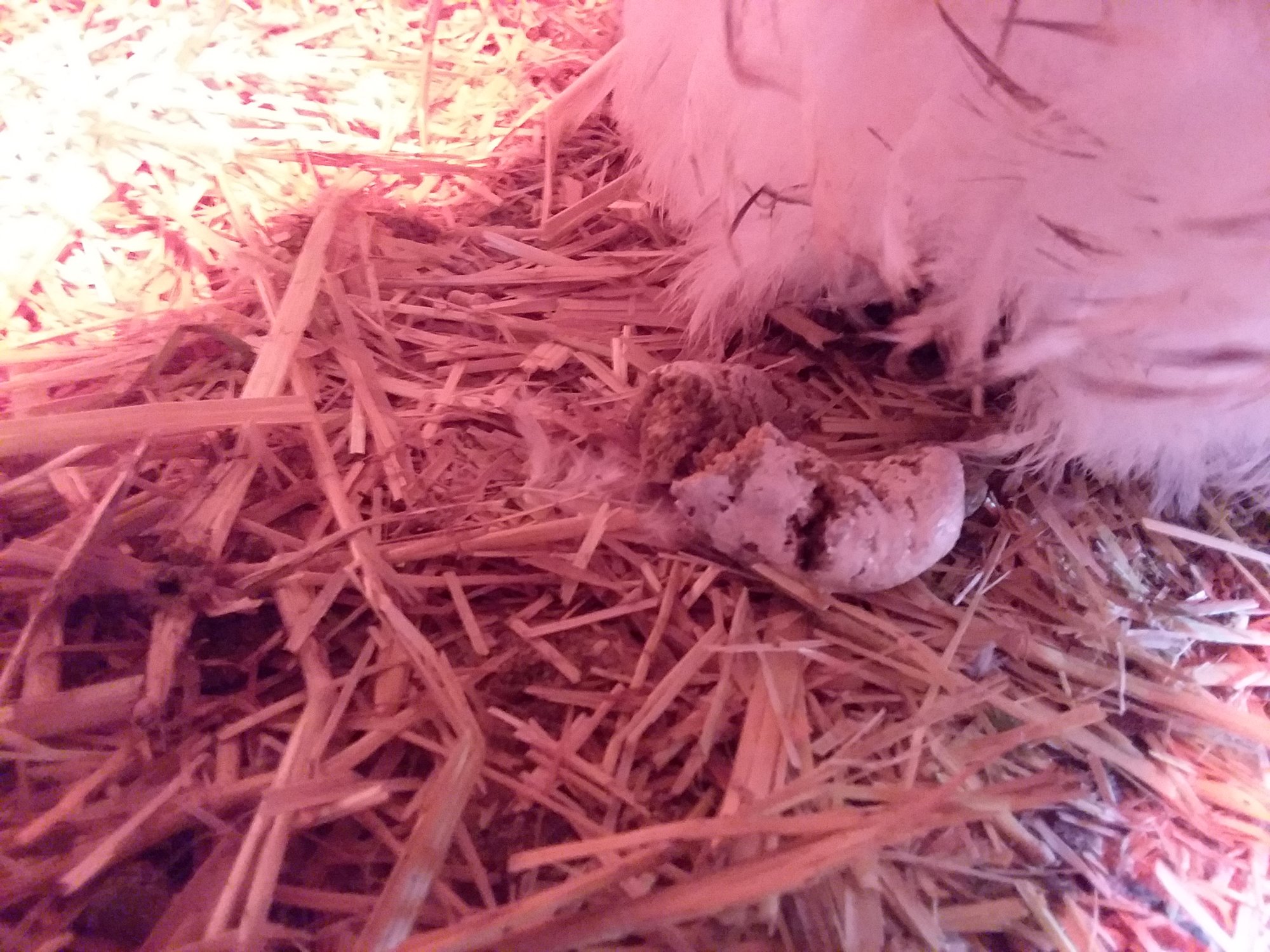 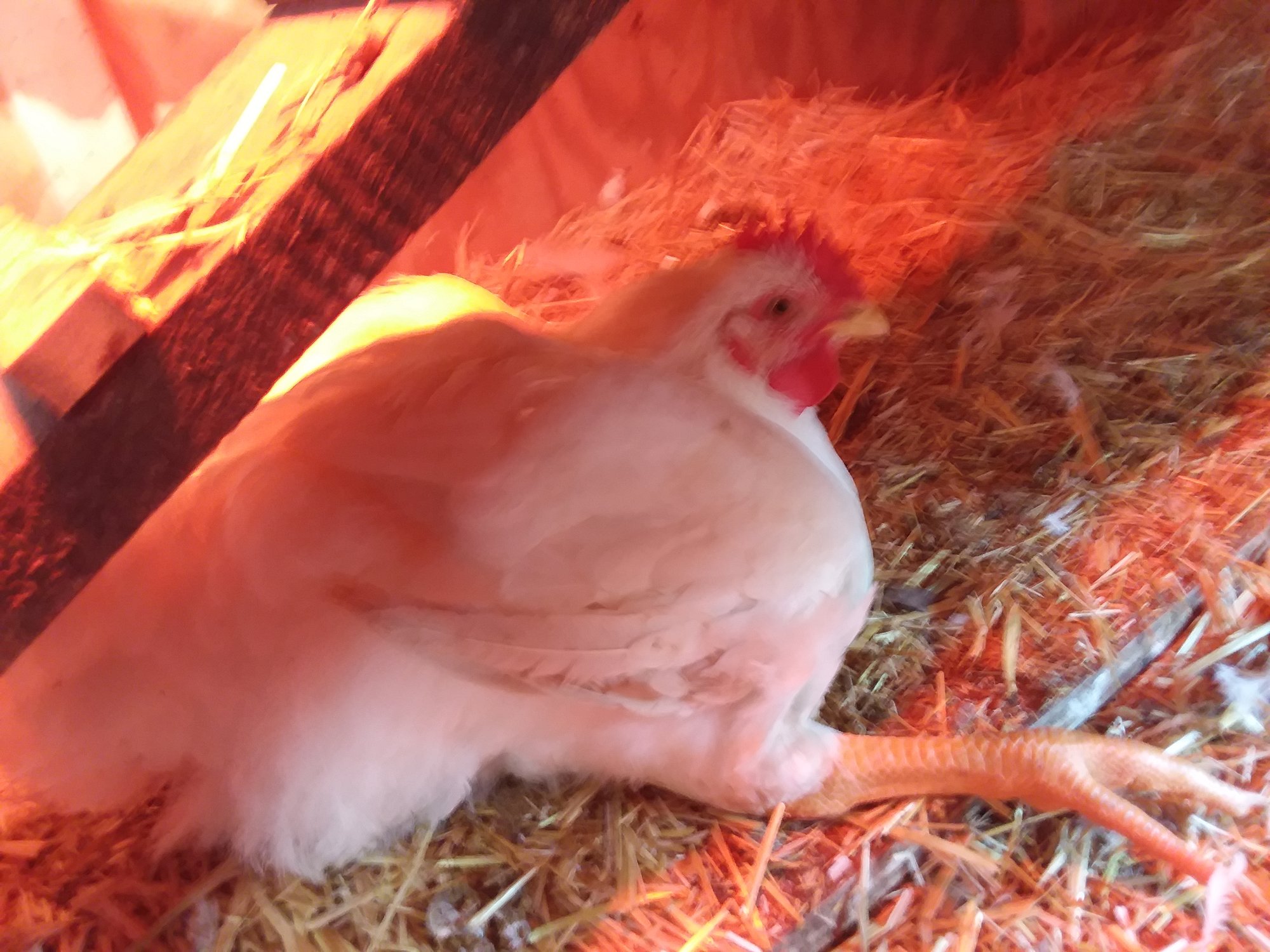 Sadly that looks more like Marek's Disease than coccidiosis.... the poop looks normal and the bird is not hunched or weak but just contorted. That last photo particularly is classic Marek's Disease. I would try a good quality poultry vitamin supplement like Poultry Cell or Nutri Drench and not administer Corid as that will block some of the vitamin B that can be helpful with the neurological symptoms like this. All you can do with Marek's is either cull or offer supportive care in the form of good nutrition, vitamin supplementation and probiotics or fermented feed to support the digestive tract. She may also benefit from being placed in a chicken sling or hammock.
Just as an aside. are you quite sure she is a leghorn and not a meat bird. She looks pretty hefty for a leghorn. Meat birds suffer mobility issues due to their size and speed of growth. That leg is way too thick for a leghorn in my opinion.

Sadly, it does appear that Marek's is a likelihood. @rebrascora had provided great necropsy sources in your area. Sorry that you are dealing with this.

Looks like coccidiosis to me so treatment should be started today.

Bruise and scab-like injury near vent