Hi
so, 3 of my 4 week old chicks came down with congested breathing a week ago or less, one of my young pullets started drooping her wings a little, about the same time (its been unusually hot so I didn't worry too much about her) and now she is also sick I heard her breathing from inside the coop from inside the house through the open window. I brought her inside the house and moved the chicks to a different room in the house.

My concern is I had a bag of manna pro chick starter (medicated) that was infested with grain mites this was about 3 weeks ago that the feed exploded with millions of mites I read that they can spread bacteria and fungus? I had called the feed store where I purchased the bag they would not take responsibility and said that I needed to have the bugs inspected by Colorado University master Gardner he confirmed that the bugs came from the feed and told me to cook the food at 125 degrees for 20mins in batches and bleach the storage containers/feeders and dust coop and house with DE which I did but now my young flock is sick! and the only thing I can think of is those nasty mites may have exposed them to something?

I started the chicks on oxytetracycline and they seem to be improving in a matter of days they started doing better, I was doing 1/4tsp in the quart waterer should I double this for the older ones My newest ill girl seems worse then the younger chicks. I was out with them earlier this evening and she seemed fine running and eating and drinking normal, but this very sudden change, has got me really worried about her breathing. Even the dogs seem disturbed by her breathing! she sounds like she is crying/whaling.
can't take her to the vet! they want $67 just to walk in the door and I am not working right now

All others seem fine I picked each sleep chicken up and listened to their breathing. But I want to start them on the antibiotics asap just to be safe! any help and advice please please share. Also the package says not to feed dairy while on the medication any suggestions for probiotics?? I have had them on AVC water all summer, but I don't want to mix the 2 together and need the antibiotic to be the sole water source.

It sounds like you are dealing with a chronic respiratory disease or possibly aspergillosis from mold. I would thow out that bag of feed and get new--it's not worth risking their health. Vitamin A deficiency can also have symptoms like a respiratory disease. Make sure that you are giving the maximum oxytetracycline dosage or they will be undertreated. Oxytetracycline comes in different brands, and each has different mixing instructions. Can you list your brand and how many grams or ounces it has? The one below by Durvet requires 2.5 tablespoonsful per gallon of water for the maximum 800mg dosage. Make sure that you have good ventilation in your coop, and no wet areas where food or dirt can become moldy. Here is a good link to read about the diseases aspergillosis, mycoplasma (MG,) coryza, infectious bronchitis, and ILT.: http://edis.ifas.ufl.edu/ps044 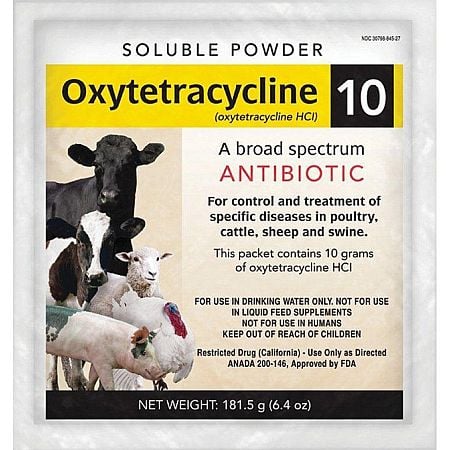 yep that's the one I have I will add more to the water!
Also I don't know if she is stressed being in the house I gave her food and she wont eat and she has not drank from the waterer. its going to be in the mid to upper 80's today it the night time lows that has me worried it been getting into the 50's over night, but should I just put her back out with the others I am going to treat them regardless I just don't know if it the stress or separation. I took her out of the coop really late last night they were settled in sleeping except her she was awake, she did quiet down once she got to sleep about 1is in the morning but once she woke up I could hear her breathing from my bedroom.

I don't recommend treating other chicks that are not showing symptoms, however, you could put her back out with the others separated in a wire cage with her own water and food. Sick chickens will not drink very well, so if she doesn't start drinking the medication, you may need to get Tylan 50 injection, and give her 1/4 ml orally once a day for 5 days. You will need a 22 gauge needle and a 3 ml/cc syringe to withdraw the medicine from, the vial, then remove the needle to give it orally.

Okay thank you for the advice, I tried giving her some hard boiled egg and blue berries and she ate those she will not eat the chicken food even with water added which she normally loves.
I will go to the feed store and ask about some Tylan 50, since I still have not seen her drink anything. I took out some carrots and kale to the other chickens about 30mins ago and another one had raspy breathing, she is not as bad as the first, she is eating and drinking fine so far, but I took her inside as well if any more start showing symptoms I will take these 2 back out and set something up put there for them since the dog crate I have can maybe fit one other chicken. the 4 week old babies are doing great the 3 are all better and no others have showed any signs of illness. so I will continue to monitor the others over the next few days.

It's carried by most feed stores that sell cattle medicines since it is used in cattle mainly. TSC and Southern States usually carry it. Here is a link for it: http://www.kvsupply.com/tylan-50-injectable-100-cc?gclid=CMfYy9aw_cACFeZAMgodbFsA3w

You can always try dipping her beak into the water mixture to coax her to drink. Using a dropper to put a few drops at a time into her beak very carefully, then letting her swallow may help. I forgot to mention that you may want to put some vitamins into their water or feed. If more are starting to show symptoms, then they may need to be treated. These respiratory diseases can make carriers of all in the flock, so you shouldn't sell or give away birds or hatching eggs. Eggs for eating are fine to sell though.

Thanks, this sucks, My poor chickens! Would a humidifier help them breath better I have one that has the vick's insert not sure if that's a good idea, the rooster has it too, I did see that they will be carriers for life on the website you directed me to, so thank you for that info as well, I think that I will not be adding any chickens until this batch is done as well I don't want to go through this again in the future if it can be avoided. I am wondering if this originated from the baby chicks I got from the feed store? This all started just after that bad bag of feed episode but now when I think about I got the feed store babies that same day, they never got sick but it was about 2 weeks later that the first baby got sick and the Easter egger started drooping her wings off and on.
I did try the syringe and put 1/4ml in at a time and I put it next to her beak and slowly pushed she responded well to that, I gave her breaks to make sure she swallowed between each 1/8 ml, I did this a couple more time and she didn't want any more after that so I will try again later I have been putting vitamins in their food and ground put veggies that are high in vit A.
The rooster is not sneezing but he is breathing very hard and not through his nose at all, I think being inside has made it worse he is such a flighty independent guy, so I may just put them put side tomorrow I want to monitor them a little more and make sure the others are doing fine, and I got to get some chicken wire to construct something for them the dog crate is too big to put in the coop.

Thank I ordered the Tylan 50 and it will be here tomorrow, but I don't think I am going to need it! They were breathing better yesterday and drinking better so I took them back out to the coop, hoping the rooster would start eating better in his comfort zone. Today I am happy to report that they are even better then yesterday, they ate the food soaked in chick boost very well and went to drinking right away when I refreshed the water. I have hopes that they are over the worst of this infection, I will keep them on the oxytetracycline for the full 7 days just to make sure.