Hey everyone. First off, I really only ended up on these forums googling questions, but after being signed up for a short while I must say that this community is one of the most empathetic, caring, helpful groups I've ever been a part of. The knowledge and wisdom on here is wonderful. And everyone seems to be genuinely kind. So Thank you all.

Now onto my hopefully not standard bumblefoot post. the duck you see in my avatar is my sweet, precious Norbie. I incubated her, hatcher her, and raised her as my own. But now some background because the guilt I feel is real. Because she was the only egg that hatched in the clutch I had, she had to spend time at a friends house that had ducks because, frankly, her living in the house wasn't the best thing for her (or us). The chickens we have just didn't accept her so I knew we couldn't integrate. Worst of all, California had a band on getting her a sister or two. Several months later, she was able to come home and she has two duck sisters (and 5 chicken sisters). I noticed the classic bumblefoot lesions not long after she was back, but no major swelling and no changes in behavior. My friend lost her husband (he cleaned the pond)and so I know the pond they have was pretty filthy (visited her 3x a month) so maybe that's where it came from? My concern is that it's been SO long that the plugs will NOT soften and come out, and if they DO, it will be very difficult to warp her little foot. she did NOT appreciate my attempt to do so as practice. So I guess my question really boils down to this:

TL;DR: My duck has at least 5 or 6 lesions of bumblefoot, but no active infection (just a mass with a cap). Vet said that it's not really possible to do anything w/o a surgical procedure because no amount of soaking has done a darn thing yet and it's very difficult to wrap a webbed foot. She's not in pain (seemingly), and waddles and gukgukguks like she always has and I have anti-biotics (to be sure) and an anti-inflammatory. BUT -- Is this something that she can live with if it doesn't get infected again, or does this need to be treated with removal? Thank you all (I can probably get some pics later if that is needed).
C

If you post pictures that will help you to get the best advice!
C

Depending on where the bumble spots are, I can try to get pictures and show you how I wrap my pekin's foot. Do you have one inch vet wrap? That is essential, in my opinion.

Okay, standby for photos. I need to pull my camera out

I have 1" vetwrap, wound dressings, gauze, basically most first aid stuff on hand. Thank you. 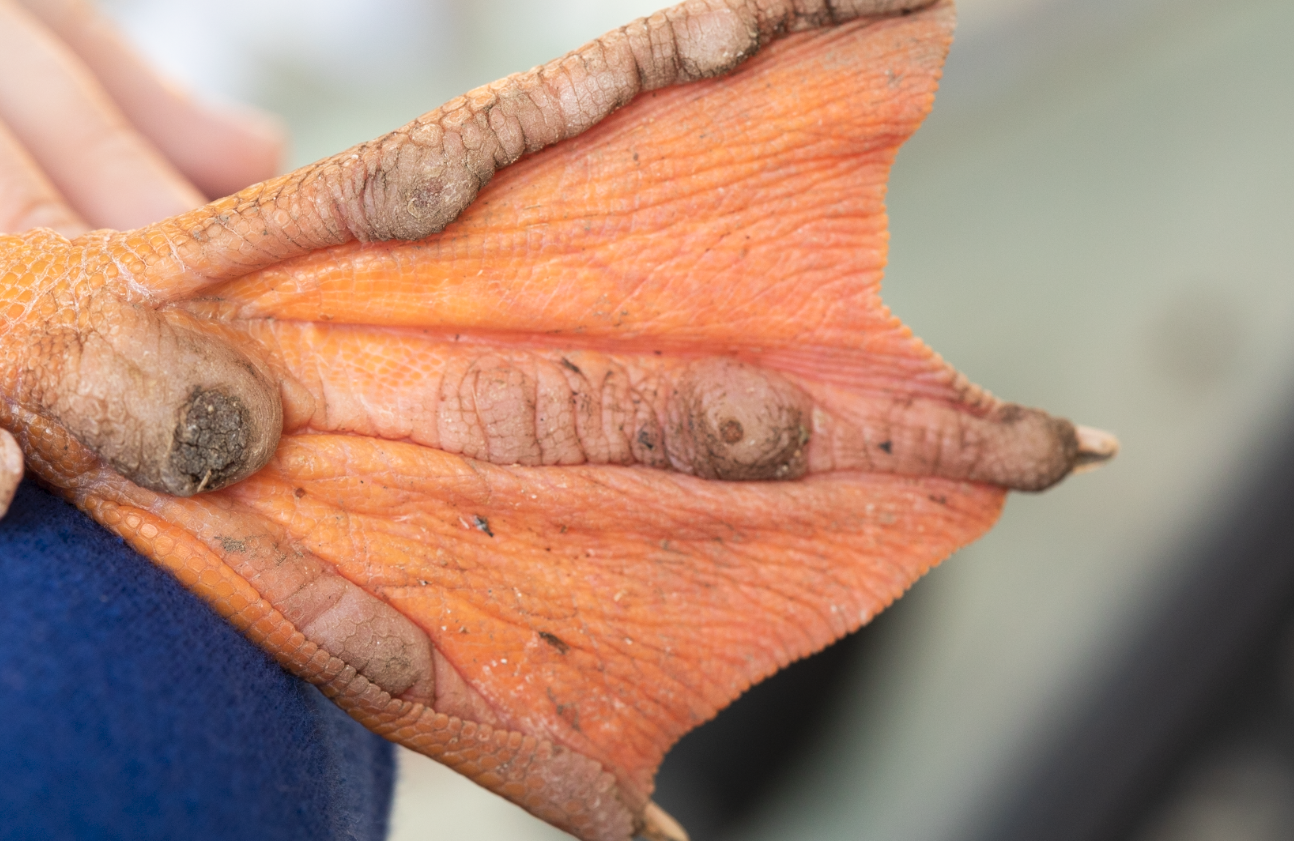 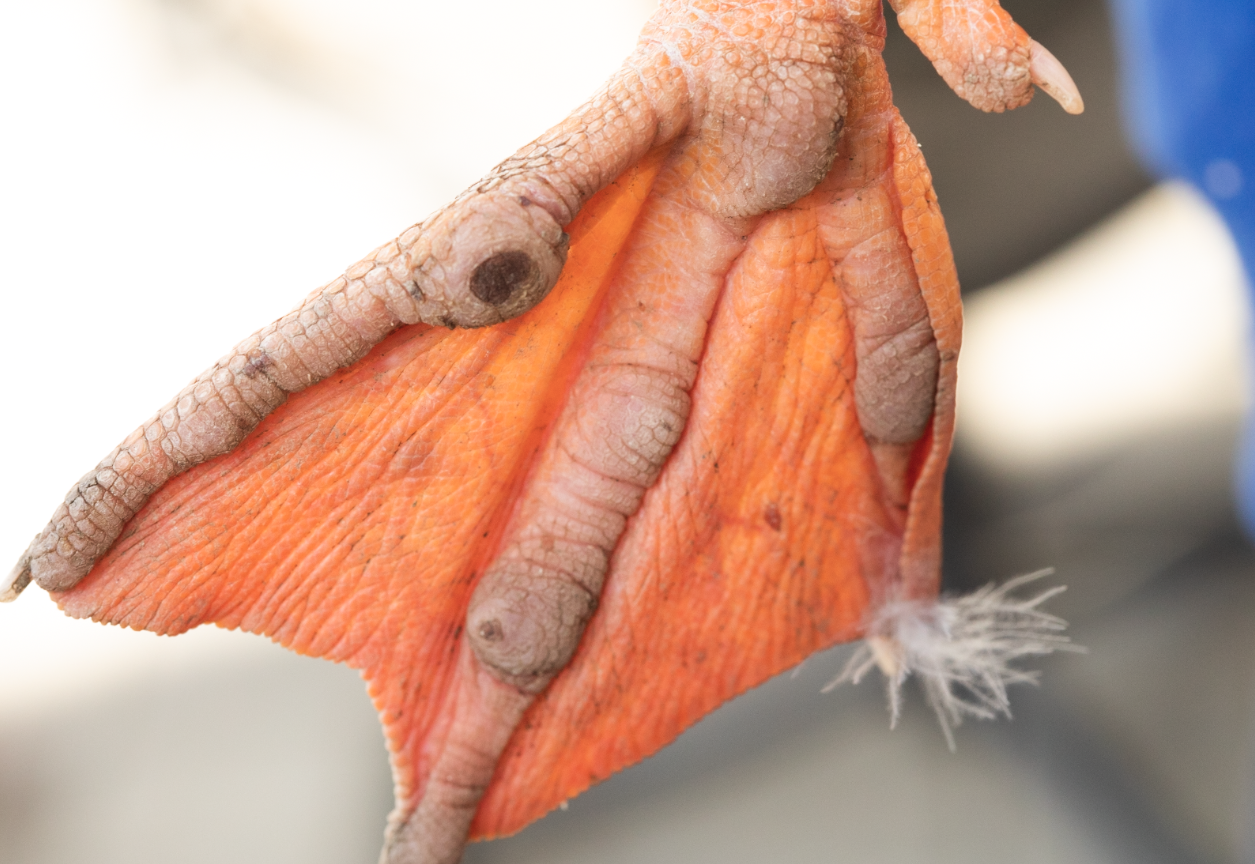 It seems like the largest ones at least probably need to be treated? What do you think @Isaac 0 ? I have seen some posts on BYC of people soaking in tricide neo for bumblefoot and I wonder if that would be good here since you're treating several. I have no experience with this treatment myself. I have a pekin who I have been soaking and dealing with a bumble for almost three months - ugh. I don't think it's actively infected, but when a big portion of scab comes off, part of the foot heals and part scabs over again. I've been soaking her once a day and treating and wrapping. I have toyed with the idea of just letting it go and ignoring it, but it does seem to finally be getting better. I wish I could help you out more, but hopefully others on the forum will. I can post some picks of how I wrap her foot though in case that is helpful to you. I will do that later this morning when I work on her.
C

Also, some of the smaller spots might just heal up on their own. They don't look terrible, and I have had a couple times where I saw little spots like that on my ducks and they've gone away without treatment.

Thanks so much for your advise. Pics would be awesome, but I Know my girl hates posing for them sometimes, lol.
C

Below are some photos of what I do with my duck. First I lay out a towel and all the supplies I need - whatever ointments, and gauze pad cut to the proper size, plus a piece of vet wrap about 18-20 inches long. Then I fill my pan of epsom salt water and bring her inside for the soak. After soaking I tuck her under my arm and gently pull up her foot, so she's standing on one leg. I dress the area and put the gauze pad then start wrapping with vet wrap. After a couple wraps around the foot and ankle I bring the wrap down and wrap around one side of the web, keeping it fairly loose so it doesn't pull on the web much. After that I bring it up and continue wrapping around the foot to completely cover the gauze and secure the wrap. Every other time I do it I wrap it around the other side of the web foot so she doesn't have it pulling constantly on one side. Depending on what stage of treatment I'm in - whether there's an open wound or not, I sometimes leave the bandage off for a day or at night. The important thing is keeping it dry, so usually changing it every day. Hopefully you will cure your duck's bumble quicker than I am doing so you won't have to mess with it as long, but my duck has actually become more trusting of me through the process. And I always give her peas when we're done, so it's not completely terrible for her. Will post the rest of the pics in a message below. 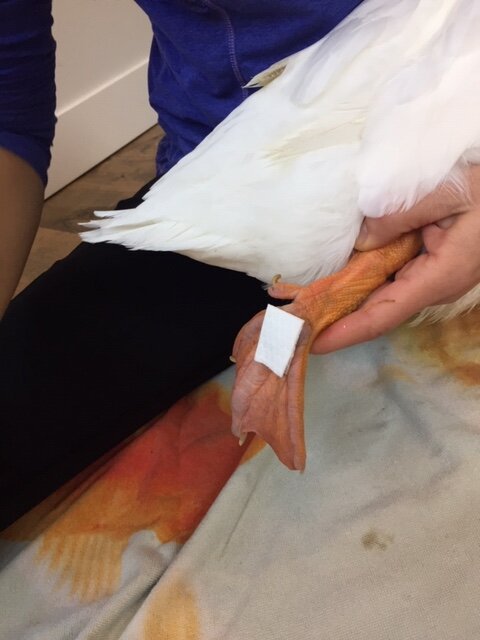 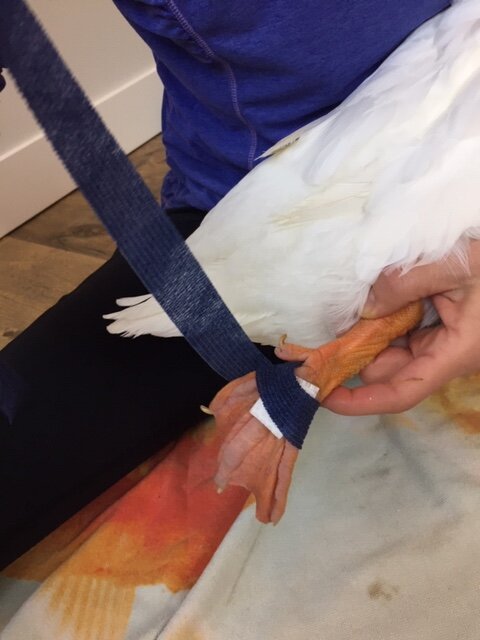 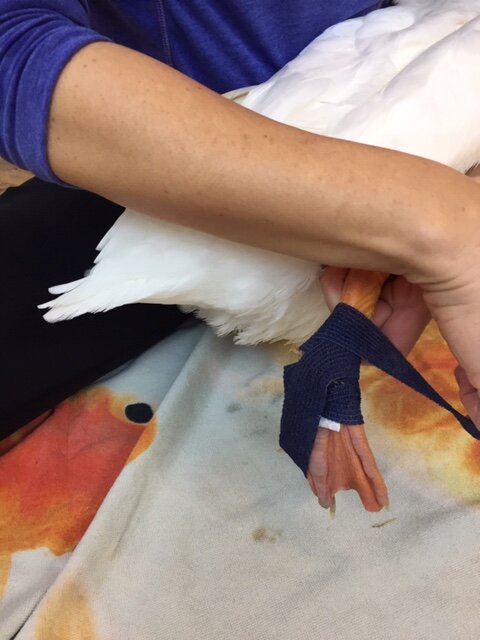 That's my dog in the crate behind Penny. Everytime I lay out the duck towel she runs in there and waits for a treat. She gets along great with my ducks! 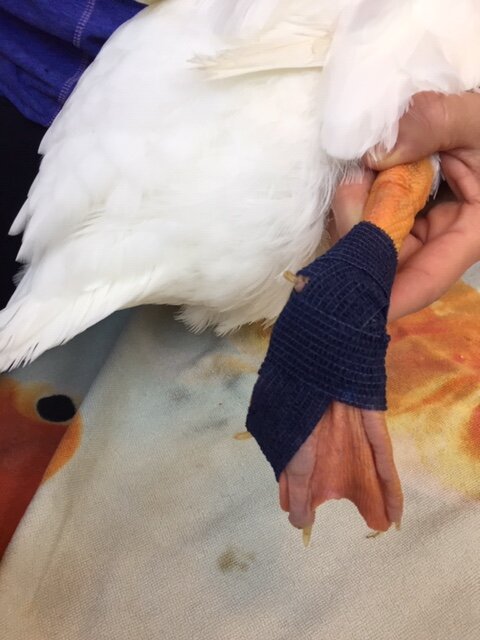 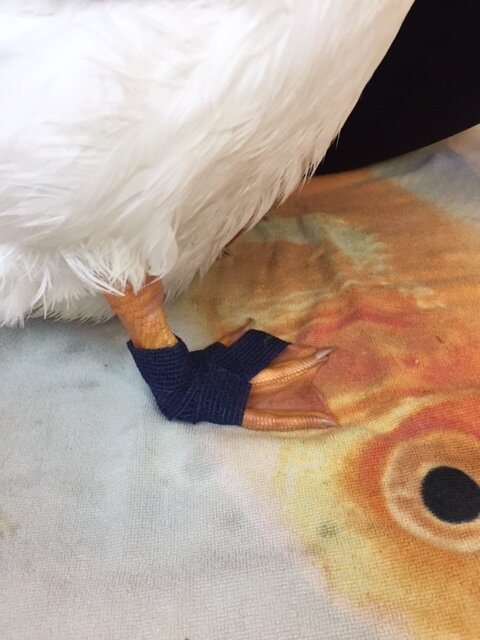 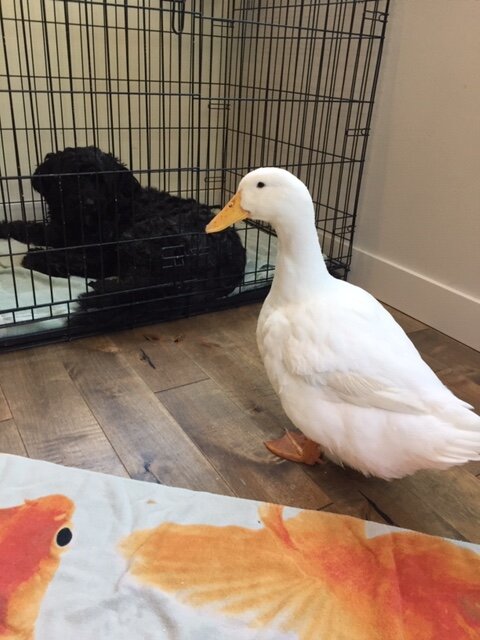 Is this bumblefoot? What’s the best treatment for my duck?