How do your geese get along with chickens?

We have 6-week-old chickens and 8-week-old African geese. The pullets are in a small run. We plan to let them range in our several-acre yard when older, as the geese do. This evening, we let one of the larger pullets out in the yard as a test, and the geese went after her pretty aggressively. Normal behavior? I hope not, because it kind of messes up our plans. Thanks for any insight.

I can't say that I have much experience at all, but I let my 5 week old goose in the yard with my 3 week old turkeys and he wanted to bite at them. So therefore, I would say that this is normal behavior.

Mine stick to their own species when they're out and about but I needed them to share a brooder for a few nights and the geese hissed at the chicks, and the chicks attacked the geese, especially the cockerels.

Mine were in a grow out pen for a few weeks and did fine. The geese did make it known that they were boss, but they didn't hurt the chickens- just kept them on their toes. The geese were 4 weeks and the chickens were 10 when they were together.

a few years ago we hatched some chickens and some geese. the chickens arrived before the geese and bullied the young goslings, pecking at their eyes and generally pushing them around. initially the goslings were terrified of the chickens and run away if they could, however, as the geese got bigger the tide turned somewhat and the geese beat the living carp out of the chickens. they would act like a group of volciraptors hunting prey, surrounding the chickens then pulling their feathers out.
with over 5 acres of grazing available i thought they would just avoid each other, but no, the geese sought opportunity to stalk the chickens and dish out their own form of goosey revenge.
a fox got the chickens eventually but left the geese alone.
rather than re-introduce potential disquiet to the land we decided to stick with geese only from there on.
to me they are less hassle, far more interesting.
now our geese are so big and powerful that if they attacked a chicken i have no doubt they would kill it.
during egging season they are so much more aggressive too. they even get stroppy with me occasionally creating huge bruises and sometimes drawing blood (no much though, and nothing worth crying over).
they boys are generally the fighters, the girls just make a lot of noise; but they are geese behaving like geese do, protecting the eggs and the vulnerable sitters.
with this in mind i wouldn't want any other animal near them during this period and would definitely not have chickens near them.
mine are embdens by the way, if that makes any difference, smaller geese might behave somewhat differently. 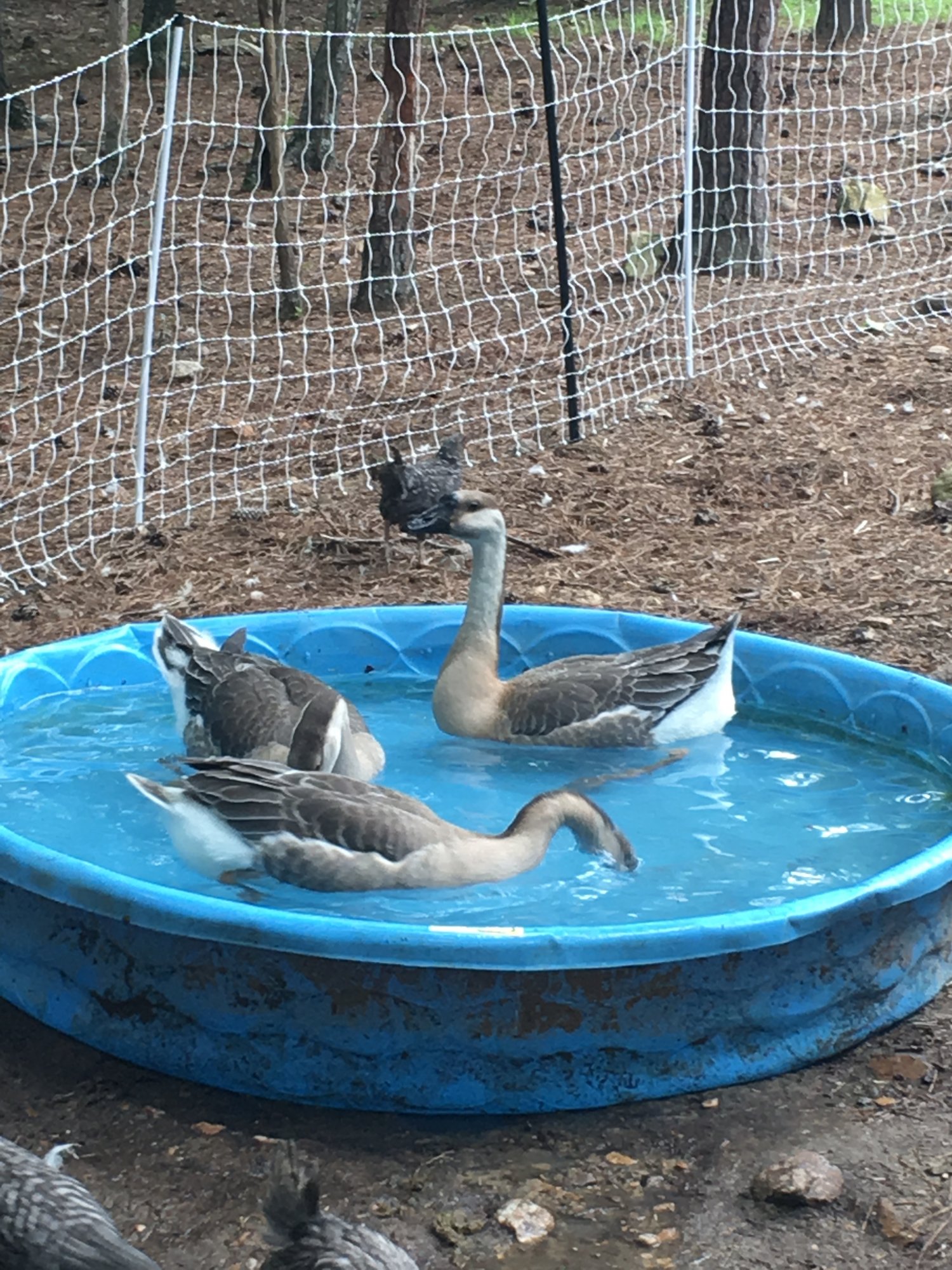 My three African geese share a big coop with chicken and ducks. They all get along great. The geese even break up pecking order fights

notsofast said:
We have 6-week-old chickens and 8-week-old African geese. The pullets are in a small run. We plan to let them range in our several-acre yard when older, as the geese do. This evening, we let one of the larger pullets out in the yard as a test, and the geese went after her pretty aggressively. Normal behavior? I hope not, because it kind of messes up our plans. Thanks for any insight.
Click to expand...

I only had one goose with mine, and it bonded with the chicks. Now they follow it around, and the goose gets angry if any of the chicks are stressed. She could care less about the other older flock, just her babies.

We have a goose who moved in with our ducks and chickens so he has no goose attitude and does fine.The goose pair I do have are aggressiveness with the chickens and i am pretty for sure are becoming more aggressive due to nesting.

I have a chinese goose and a mix breed goose living with my chickens and ducks. They all mostly get along great! When i first added the geese, they had been living with ducks all their life, so they didn't care about the ducks. With the chickens they chased them a bit on the first day, and made it known they were not to be messed with. After that they did fine and pretty much kept to themselves and left the chickens alone. The only problem ive ever had was a muscovy drake trying to breed with them and them getting totally freaked and not wanting to leave the coop. They seemed to bully the chickens more when they were getting bullied. that wasnt their fault though, it was the drakes. Once i removed him, they were back to their peaceful selves

Thanks for all the responses. Sounds like the goose behavior varies widely. We've tested ours with chickens a couple more times since my original post, and their behavior is more like that of Capper2013 who described them as "velociraptors." They tend to spread out and encircle their potential victim. I guess I'll give it one more try now that the chickens are a bit bigger.

Geese & getting along with ducks

K
Geese for a newbie?