How to mentally prepare for butchering?

***This is a genuine question. Please no useless comments saying "man up"***
I've never killed anything. I don't like the thought of me killing things either. Blood and stuff doesn't gross me out though and I've helped my friend gut one of his own roosters but I showed up to his house after he killed them. I didn't even know he was going to kill any birds actually.
I've raised my birds and developed relationships with them. The only ones I'm considering eating though are ones I'm not closed to and if any of the males start to get too aggressive. If I can butcher my own birds though I feel like it MIGHT save money on meat (chicken foods kind of expensive though so I'd have to do the math to figure it out) but also I would know my meat had a good life before it became my meal. Idk it's really conflicting for me. I've watched videos of how to do it and decided using a killing cone and cutting the artery in their neck without cutting the wind pipe is best but idk if I can do it so I'm curious how some of you guys were able to get over the first butchering. I know I'm not the only one who feels/felt this way. Any advice or personal stories would be greatly appreciated. And I know some people can be sensitive to gore but I'm not. I want to be a surgeon and watch surgeries on my free time so you don't have to worry about offending me with any unpleasant stories or detailed stories.

I would recommend reading "animals make us human" by Temple Grandin, it's very refreshing to get a perspective on being dependent on animals, farming and harvesting animals, while at the same time having compassion for them. I have found that it is possible to strike a balance.

I have harvested a few hundred chickens over the last few years in an attempt to grow mostly our own meat for our family of 4. I don't kid myself or overly sugar coat what I do, I am definitely taking the life of animals for the well being of myself and family. I do have some ways of thinking about it that hel pme feel better and have taken time to develop processes that I believe help reduce the suffering on the part of the animals.

I believe that life energy comes from the sun and universe, passes to plants and the life force works it's way up the food chain to my chickens and ultimately to my family. I see it as a continuum. I also believe that consuming meat can be part of an ecological, sustainable lifestyle and I strive to find some degree of balance.

As for the actual killing, I use kill cones, as you mentioned, I take each bird, hold it upside down till it is disoriented from the blood rushing to it's head, place it in the cone and make a swift cut across both jugglers and place the neck/head between two nails that I have placed at the right height to hold the head steady as it bleeds out so the blood doesn't go everywhere. it's swift, the bird is several steps toward passing out before I even begin the cutting due to it being upside down, and it passes out immediately as the blood pressure to it's brain drops. you do have to be prepared for the flailing and the occasional squirt of poop that shoots out.

If you are just killing a few here and there, you can take more time with the chicken, capture it more gracefully and hold it calmly. when I process 30 in a go, it is more challenging to be as considerate of the birds last moments, but i do my best and always strive to improve.

check out the video on how to make a kill cone out of a five gallon bucket. I made mine this way for a few dollars and they are holding up great!

It's never ever easy. The first time was definitely the hardest, though. I can now do it without requiring a week to get ready.

For me, I watched tons of videos, especially the graphic ones. I pictured myself doing it, over and over, until it lost the "ick" feeling. I planned out every single step, and I mean everything. I spent a good long while going over my decision to process in my mind, until I felt firm in my decision and was confident that I was making the right choice. Practicing on already dead birds helps too... I did that with a hawk kill, and it just made it a little less new and scary.

It's been a year or two now since I started killing my own birds. Is it something I can do easily? No, and I don't think it should be such. It's a life you're taking, and some solemnity is appropriate, I believe. But it's no longer emotionally charged.
It just plain isn't the way for some people. I'm not one of them. I eat meat, and it is part of my version of a balanced diet. So, it's my responsibility to know where and care where that meat comes from. Blind eyes are not a good thing.

I didn't always think this way. I've done my research on the topic, from every angle I could think of. Even considered going vegetarian for a while. Point I'm trying to make is that I thought it out for myself, reached my own conclusion, and followed through with it. Nobody else can do that for you.

As for killing, I personally really like the broomstick method. It's quick, clean, pulls the brain stem out, providing a humane death, and can easily be used for slaughter if you cut the head off right after. I sometimes do the manual version, but roosters have tough neck muscles so the extra leverage is nice for them. No knives; I don't trust myself with a sharp pointy thing when I'm 'in the zone'!
Last edited: Nov 6, 2018

I’ve discovered that there’s a company in a nearby town that will process my birds (slaughter, butcher, package) for about $4 a piece.
I would do it myself if I absolutely had to but since I discovered this company I’m willing to transport the birds to them and pay them so I don’t have to do it.
I have a hard time with any kind of animal suffering and I don’t really trust myself to use any of the well known methods of slaughter without causing that to happen.
Perhaps this might be an option in your area?

I'm in a totally different place than you. I grew up on a farm where we butchered chickens and pigs. I can't remember the first time Mom told me to bring her a chicken and I gave her a a plucked and gutted carcass. I'd watched Dad do it many times but I bet that carcass was still a mess when I gave it to Mom. I eventually learned.

Raising chickens for meat was the main reason I decided to get chickens in the first place when I retired and could. I still do not enjoy the actual killing and doubt I ever will. I try to think that they have had a really great life and one bad moment. You are studying to make that bad moment as short as you can. That's the best you can do.

My suggestion is to get your friend over the first time. Maybe get them to actually kill the first one. After watching the first time you might decide it's not for you. Or you have moral support and experienced back-up in case something goes wrong. I don't know what kind of relationship you have with them and maybe you would not want them around, but something to consider.

My experience and philosophy is very similar to @BantyChooks .

I keep chickens for food, and planned on hatching replacement layers, so knew from the get go that would include slaughtering extra males and old hens.

It really helped to read a lot of posts and blogs and watch a lot of vids over my first winter, while I had an extra cockerel secluded, and did the equipment setup and walk thru before brandishing the knife.

The first is the hardest for sure, I had the adrenaline tremors for a good 30 minutes after my first kill, and the subsequent ones are too, I still shake a bit even after a couple dozen harvests. I wrote about it here.

I had cut up many a whole chicken... but killing, plucking, and gutting were all new and took some practice to get efficient. Just did the fall hen cull last week and am still improving my technique, happened to watch a Joel Salatin vid that someone posted that morning, kind of inspired me to get 'er done.

As others have said, the first time is the hardest. Get your friend to assist and provide back up support. By the way, the Temple Grandin books and story are uplifting and enlightening.

If my friend wants to I'll probably get him to help. Or get another friend to help. I don't think my other friend has ever killed a bird before but I know he's not against it and is more mentally capable of it than me (I think he's kill deer.) It wouldn't hurt to learn together. The original friend I mentioned...the only way he found to kill his chickens after he realised his axe wasn't sharp enough was so swing them by the neck in a circle (his coworker told him it would be quick and painless) and the last one he did it didn't kill the chicken but rendered it paralyzed and he said it just started at him accusingly. He hasn't really killed anything since but he says he still will but I know that upset him so.

On second thought, don't get the original friend to help.

If I decide to kill anyone he'll be the first. He's more aggressive and rapie than any of my other male muscovy. The only thing that's holding me back though is the fact he was part of the first ever eggs I've hatched so I'm really attached to my muscovy but I will admit though I'm least atached to him out of all of them. 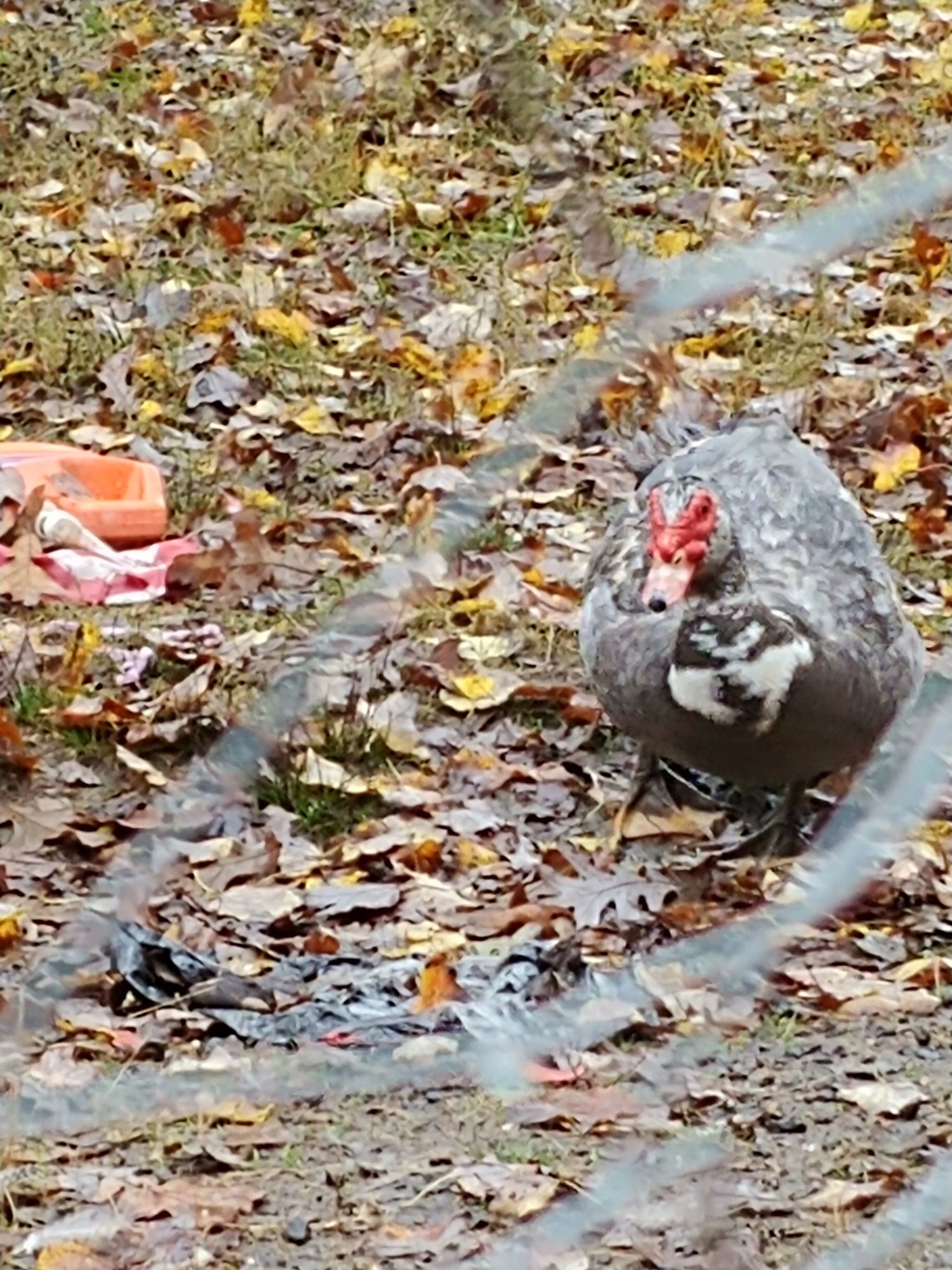 I did it... I butchered a problem causing Rooster
2

H
From the suburbs and struggling internally with making the plunge into keeping (and slaughtering) meat birds. Need advice!
7 8 9

How long can butchered chicken sit out?

Real story & How to tell if chicken is still alive?!