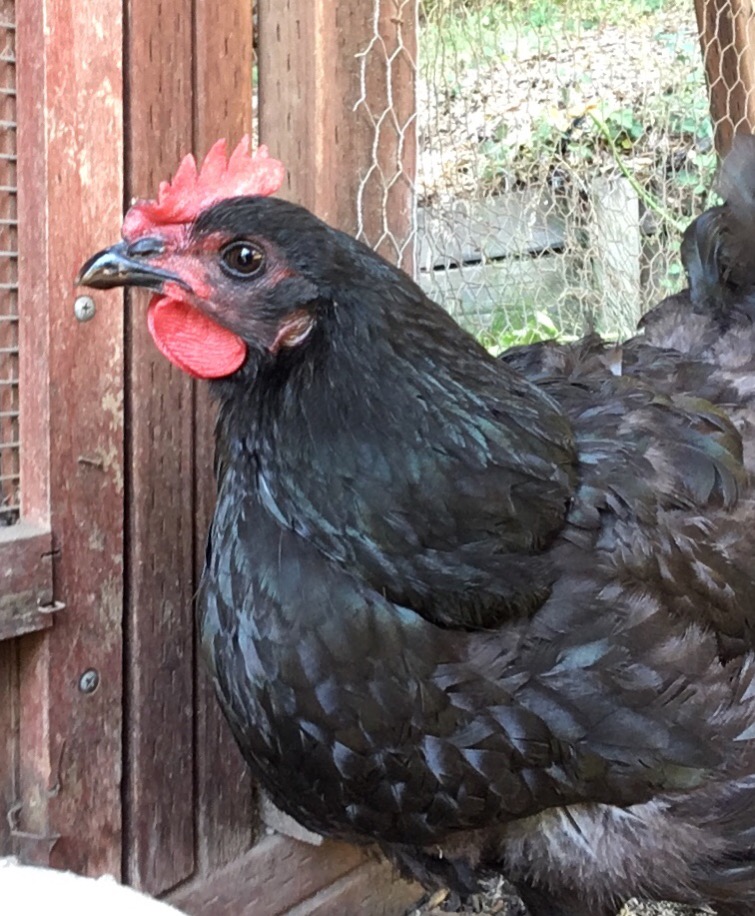 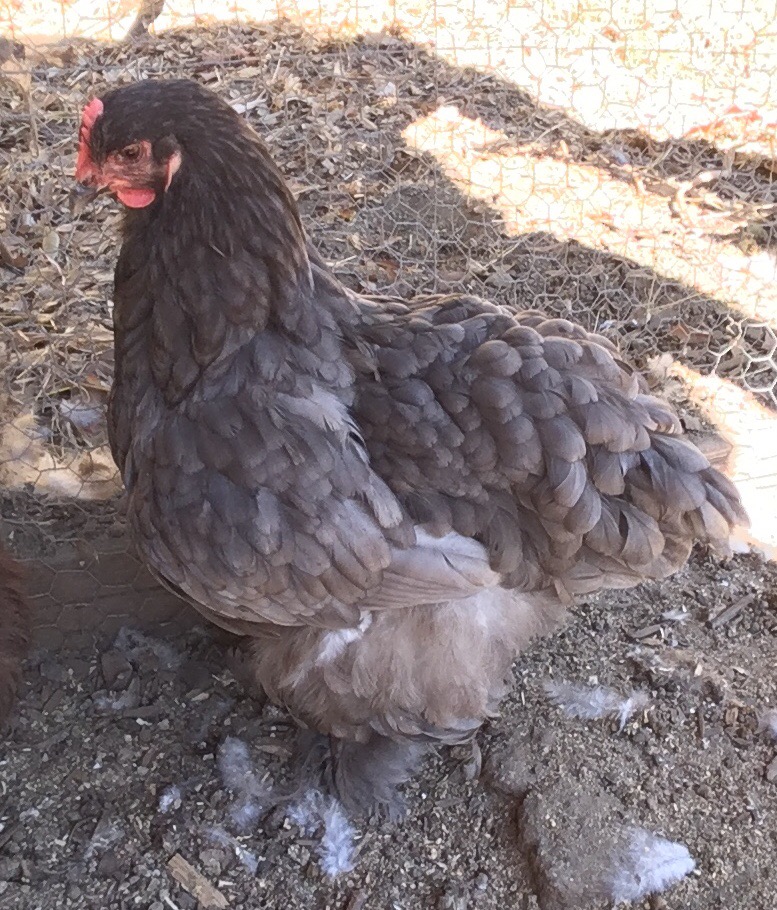 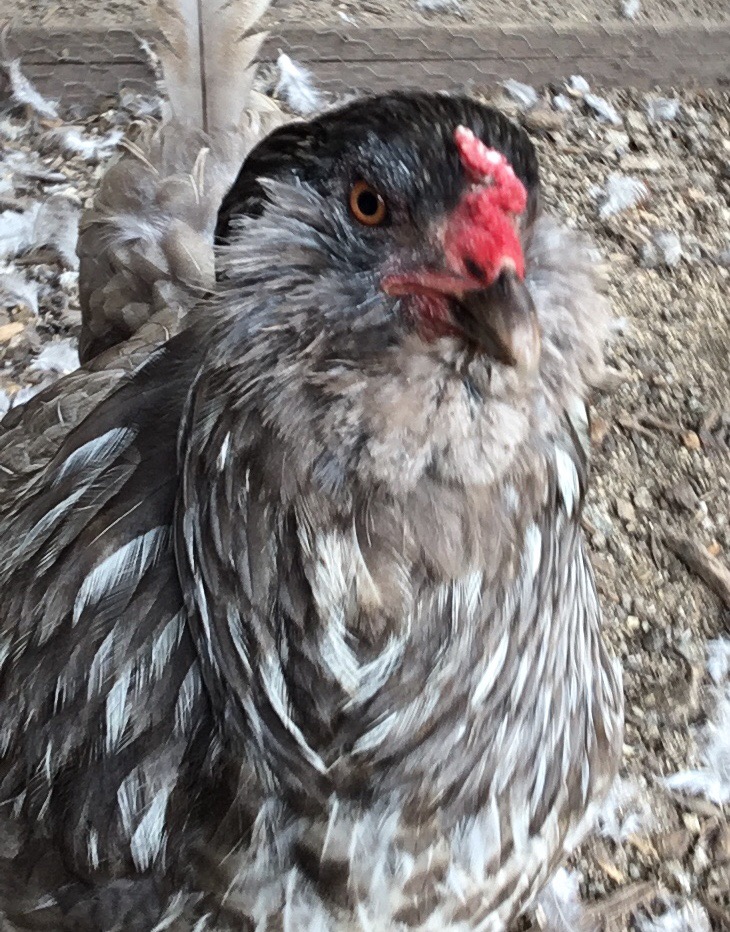 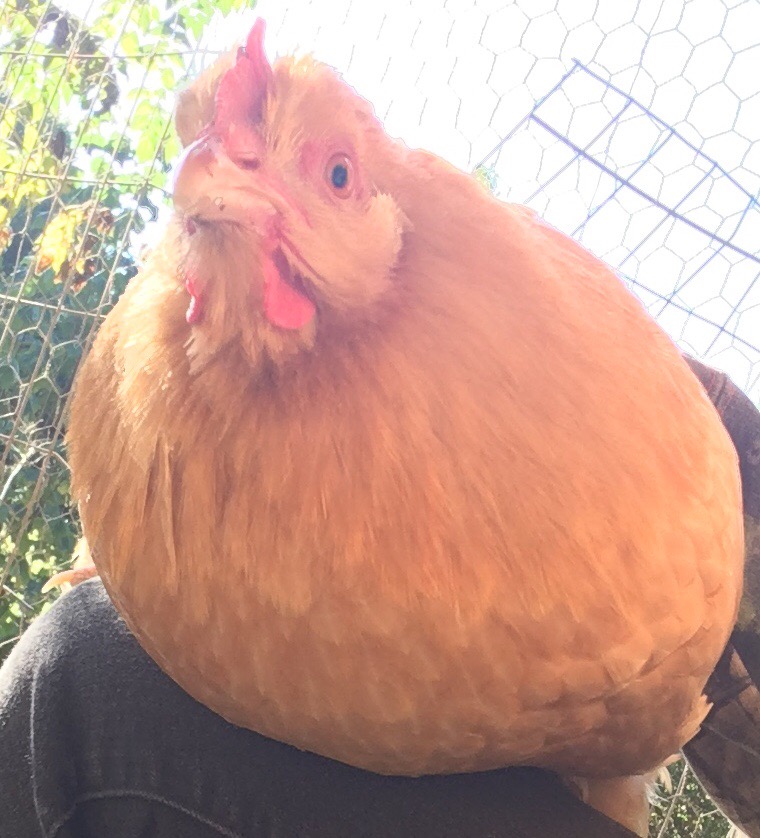 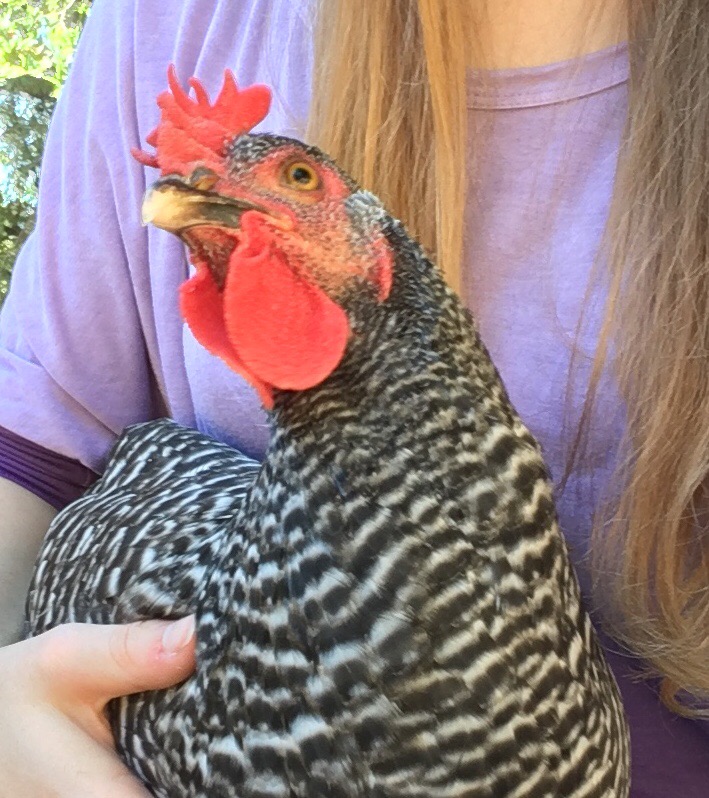 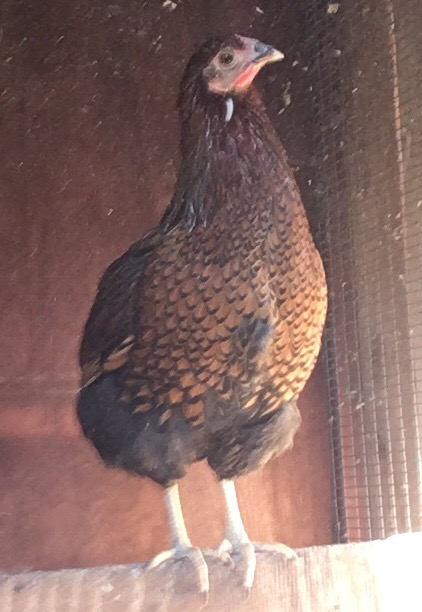 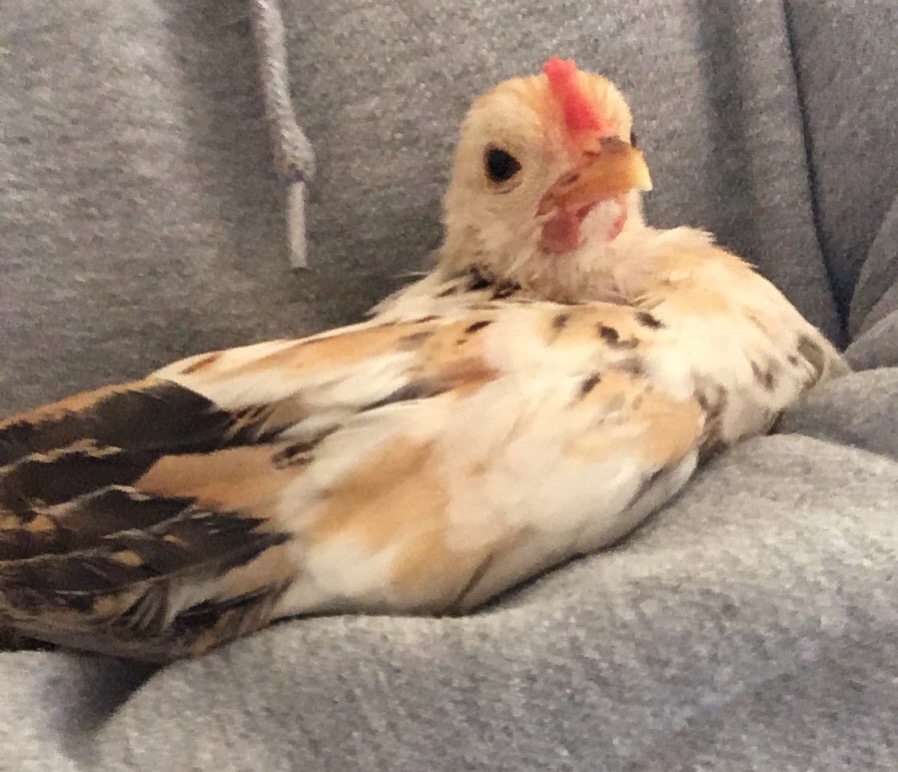 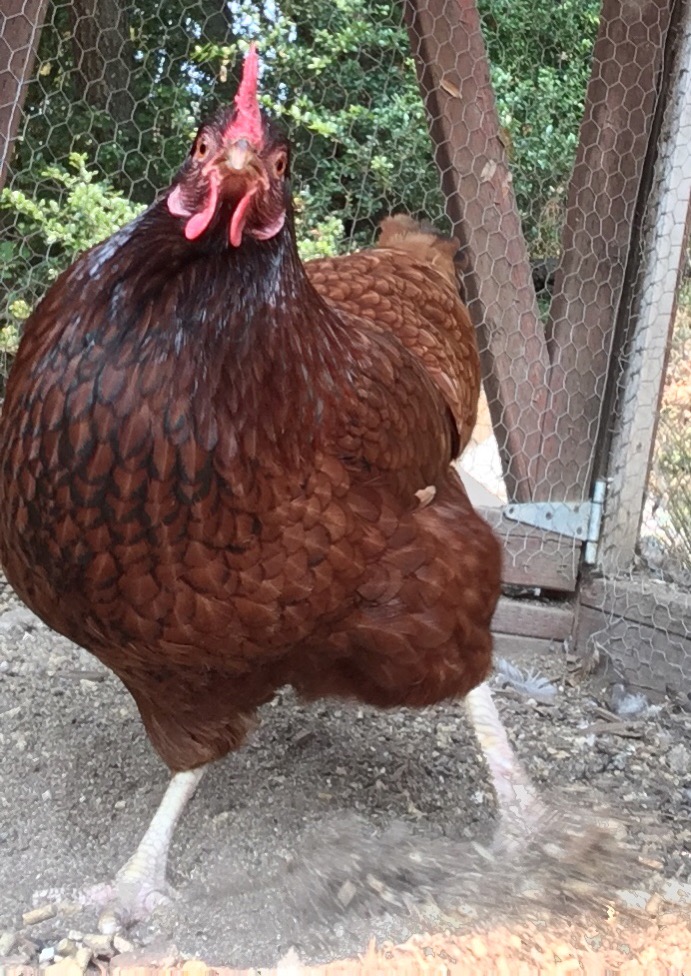 Well I’m finally getting around to introducing myself haha.

I am a huge animal lover, artist(specifically sketching and some painting, but pretty much any kind of art) and love gardening. I’m currently in high school.

Right now I have 8 chickens: 7 hens and a cockerel. Penny is my first chicken, a gorgeous Rhode Island Red hen. We weren’t planning on getting a chicken when we got her. We were going to the plant nursery to get our yearly garden and they had some chicks. So we got one. Ever since then, I have loved chickens. About a year after I got her I got 2 chicks, a Black Australorp named Eppie (she died last year to a fox, sadly) and an Americauna/Easter Egger named Esther. When I first introduced the 2 chicks to Penny she didn’t like them. So I put 2 eggs under her (she was brooding) and waited a day. Then came out at night, removed the eggs and slipped the chicks under her. My sister and I slept(or rather sat outside in our sleeping bags because we weren’t supposed to fall asleep) outside next to the coop in case anything went wrong with Penny and the chicks. After a long night with rats, opossums and raccoons, when the sun was finally up we peeked inside. Penny was pressed down in her nestbox with a little peeping fluffball under each wing. Since that day she’s never been the same hen. She was a wonderful mama to those two little peepers, and it was so sweet watching them follow her around and watching her teach them to be a chicken. About a year after that I got 2 more chicks: Pebble, my Blue Cochin hen and Raven, my Jersey Giant hen. No one was brooding when I got them so I just raised them myself. And they’re still the sweetest little fluff balls. And such close buddies, too. Then a little less than a year later I got 3 more chicks: Autumn, my Golden Laced Wyandotte, Bowina, my Barred Rock and Hazel, my Buff Orpington. Pebble was brooding when I got them so I did the same thing with her that I did with Penny, only Pebble went straight back to brooding when the chickies grew up. Then, about 4 months later I got my serama rooster, Leo. And he is spoiled rotten as well as being the sweetest little chickie. He follows me around, comes when I call him, and loves cuddles and attention.

So back to when Pebble was raising the 3 chicks: I was in the house doing school and had my earbuds in, the chickens were out in the run and all was good. Until my brother, hearing the chickens making a commotion, exclaimed “are the chickens ok?!” And ran to the window. I ran over to the window and just saw a blur of feathers and reddish brown fur all mashed in the smallest corner of the run. I ran as fast as I could, screaming. As soon as I came down into the yard I yelled as loud as I could and the fox ran off. (Still don’t know how it got in or out of the run. Been working on fox-proofing it and haven’t had any problems since then) I ran into the run, not knowing if my hens were even still alive. (And so, so glad I’d decided to have Pebble and the chicks in the coop and the other 3 hens in the run that day! Almost had it the other way around) there were sooo many feathers everywhere.. I was so relieved to find all three hens huddled by the gate, alive, breathing and no apparent injuries. After inspecting them I was happy to find there were no serious injuries, but Raven had clumps of feathers missing on her back(which only started coming back a few weeks ago!) and she had bite marks, as well as feathers missing, on her neck. Esther also had bite marks on her head. If I’d come out just seconds later I believe I’d have had at least one dead hen. I am so thankful to still have all 3 of those hens today. That was just a couple months after my sweet black australorp, Eppie, was killed by a fox while she was free ranging.

So that’s about it for my babies. I’ve only had chickens for about 4 years now so not much to tell, except that I love my chickens and in my opinion they’re the best kind of pet

Mine are all so sweet and friendly and just their happy little chicken selves.

your chickens look beautiful, and it's clear that they are very lucky to have you as their mama

fox needs to go by by very soon!!

You sound like a good chicken mum! That Fox is gonna keep coming back

Yeah there were 5, actually.. a mom and 4 younger ones. But there was a time after that when I came out and ALL 5 were there around the chicken coop. So I ran out there to scare them off and the babies ran but the mom just stood there staring at me so I threw a brick at her (just to scare her, not actually trying to hit her with it. I do like foxes despite them liking chickens) and she jumped and ran and made a warning call to her babies and I haven’t seen any of them since then, so hopefully they won’t be coming back.

your chickens look beautiful, and it's clear that they are very lucky to have you as their mama

Nice looking flock, thanks for sharing the pictures!

Saturday at 8:07 AM
Lacy Duckwing