Is this brooder big enough? (pics)

I have five chicks, three that are two weeks old and two that are five or six weeks old. The breeder I got them from has had them all together and they seem fine together. We bought a tub today to use as a brooder, but I'm worried it's not big enough. We plan to in the next week either put them in our bathtub or bring my daughter's play sandbox inside and use that instead, but is the one they're in okay for a few days or should we be moving them asap? They all seem happy, they're ranging around the entire tub, they're eating like crazy (though they ignored the greens I put in for them earlier), and I've seen them all drink. I haven't noticed them pecking at each other at all. I do need to move the light up tonight, I'm worried about how close to the plastic it is plus it's a 100W bulb which earlier people here have said is probably too hot. We're going to get a new one tomorrow. 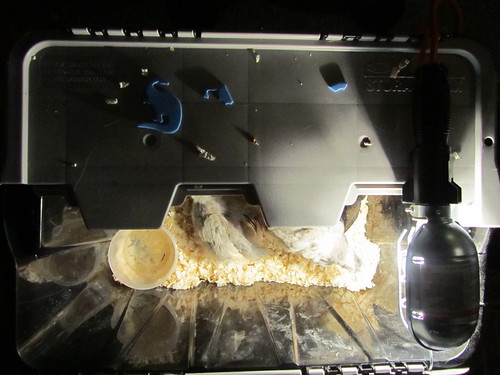 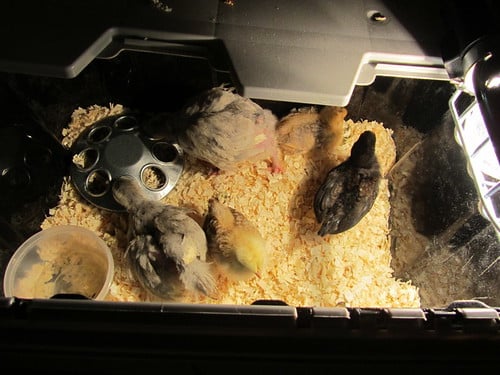 Oh, one of the Lavender Orpingtons keeps burying herself in the shavings and then sort of lying funny in the hole she makes. Should I be worried about her or might that just be a personality quirk? She's fine otherwise, is eating and drinking and ranging around.

Quote:
she's dust bathing without the dust in the litter

ahh..my li'l chicks must be deprived; they are still on paper towels lol...w/shavings under that..

They seem to have quite a few feathers already and I would back up the light about 6". As far as digging a hole she's dust bathing perfectly normal. The tub is a bit small. Enjoy your chicks.

They look pretty crowded to me. The older ones are getting big enough that they would appreciate more space to move around.

I see that you are using a white bulb. I would recommend getting a red one. The chicks will be less aggressive to each other. As far as questioning if a 100 watt bulb is too hot or not, they only way to know for sure is to use a thermometer to check the temperature. There are too many variables to know if this is too hot or not.

You mentioned putting greens in the brooder. Are you providing them chick grit? They need chick grit available before you give them anything other than chick feed. I put the grit in a bowl by itself and leave it available to them 24 hours a day. And in my opinion 2 weeks old is a little young to be providing treats. Remember that regardless of age treats should not make up more than 10% of their diet.

Believe it or not, all of your chicks would run and take off in low-level flight if they had about ten feet of run-way! So your tub-brooder, as comfy as it looks, is much too small. As long as the chicks aren't pecking one another, getting them a bigger space isn't real urgent.

Six-week olds are ready to move into a coop. The others could move out from under a heat lamp in another two weeks. You need to start thinking beyond "brooder". Perhaps instead of a larger brooder, you need to move them all into a coop with a heat source for another two or three weeks for the younger tykes.

Are these your only chickens, or do you have an established flock?

Thanks all for the reassurances about dust bathing! Glad to know it's normal.

Quote:
Thank you, when we go out tomorrow to get a new bulb I'll look for a red one instead. I will put the thermometer back in there and test out the temperature again now that I've moved the light. They are all lying in the area of the light now, but I don't know if it's because the brooder is so little there's no where else really to lie, or if they're too cold. They're not huddled together and a few are on the edges of the light.

I found out about the chick grit and took the greens out. I'll pick some of that up tomorrow too. I had heard that giving them bugs and greens early on helped them learn to free range later. Don't know how true that is but it seems like out with a hen they'd have access to treats early on. I'll definitely keep in mind not to give too many though.

Quote:
I'm actually worried about them jumping out of this brooder in the middle of the night and not being able to get back in. We've made the room really really warm so if that did happen I think they'd be okay. So far none have shown any inclination to jump or fly though. Funny that they might given enough space though! We'll get them into something bigger asap though.

The older ones still have bare backs, so I assume that means their feathers aren't fully in yet? Our coop isn't quite ready yet. These are our first ever chickens.

We had a cold snap hit us while we were working on the coop. As soon as it warms up again (which it's already started), we're going to start working on it again. It will probably take us at least another weekend or two though.

Others have answered but I agree they look a little squished at this point. I'd consider that a baby chick brooder, time to upgrade to a big kid brooder or even outside. I plan to put mine outside at 6 weeks as well, but before that they will move to a larger brooder at 3 weeks.

B
Littles and bigs

Who knew a closet could work so well
2