Just got them into the run, what should I do ne

I just finished construction in my 8x8 run and got my 5 week old hen and rooster into it. It is just on top of the grass, and already they are eating grass and bugs.

My coop isn't constructed yet so I am still going to be bringing them in at night to sleep in the brooder. In the next few days I will be getting two more hens for a total a four birds.

I just have a few questions. Do they need grit, or can they get it from the soil under the lawn?

Besides food and water is there anything else they need in the pen?

This is the first time I've had them out of the brooder for any length of time, so is there anything else I should know? I'm planning on supervising them pretty closely for the first few days. Is there anything I should keep an eye out for as far as what they are eating/how they are behaving, common medical problems, etc? 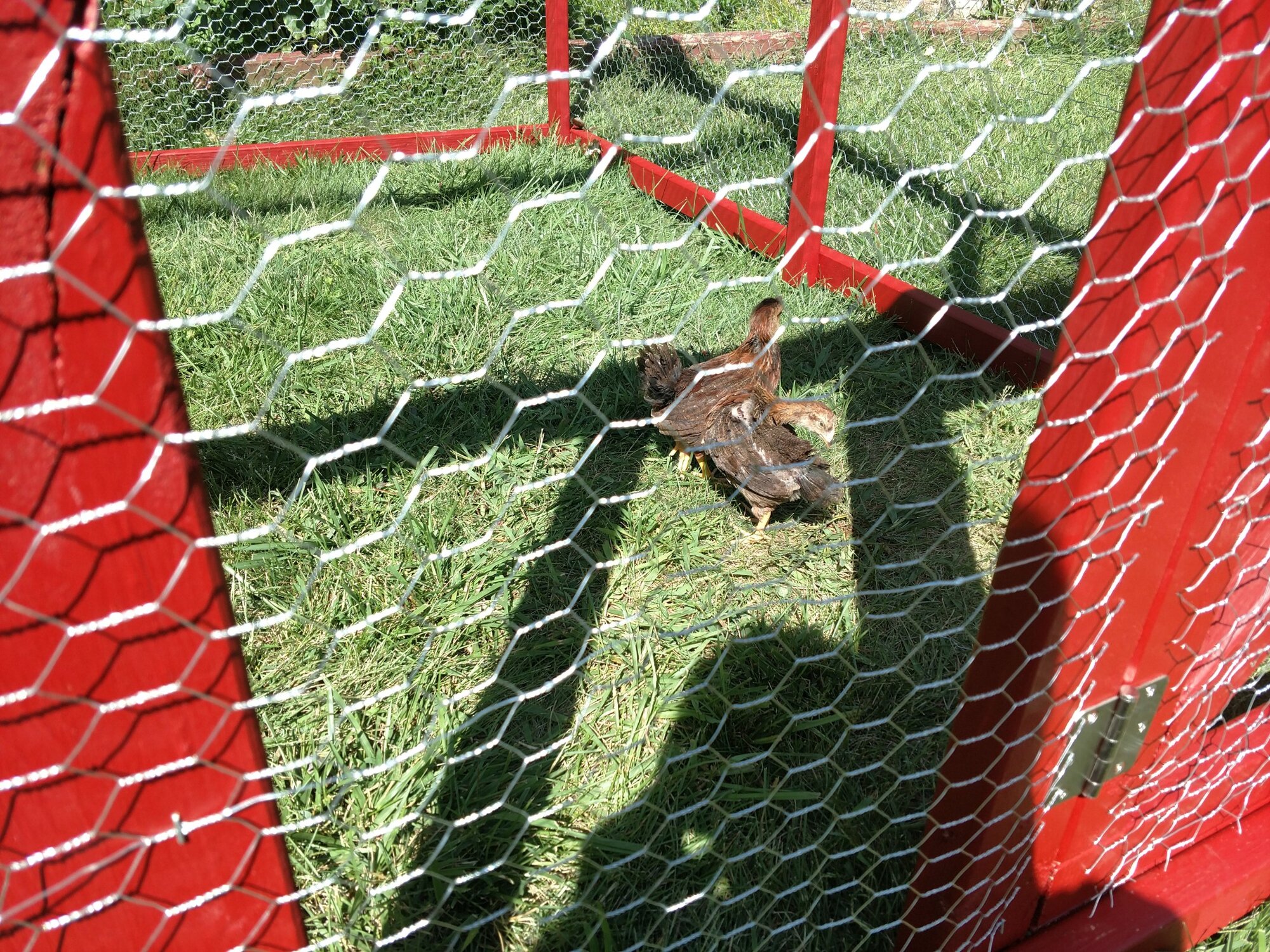 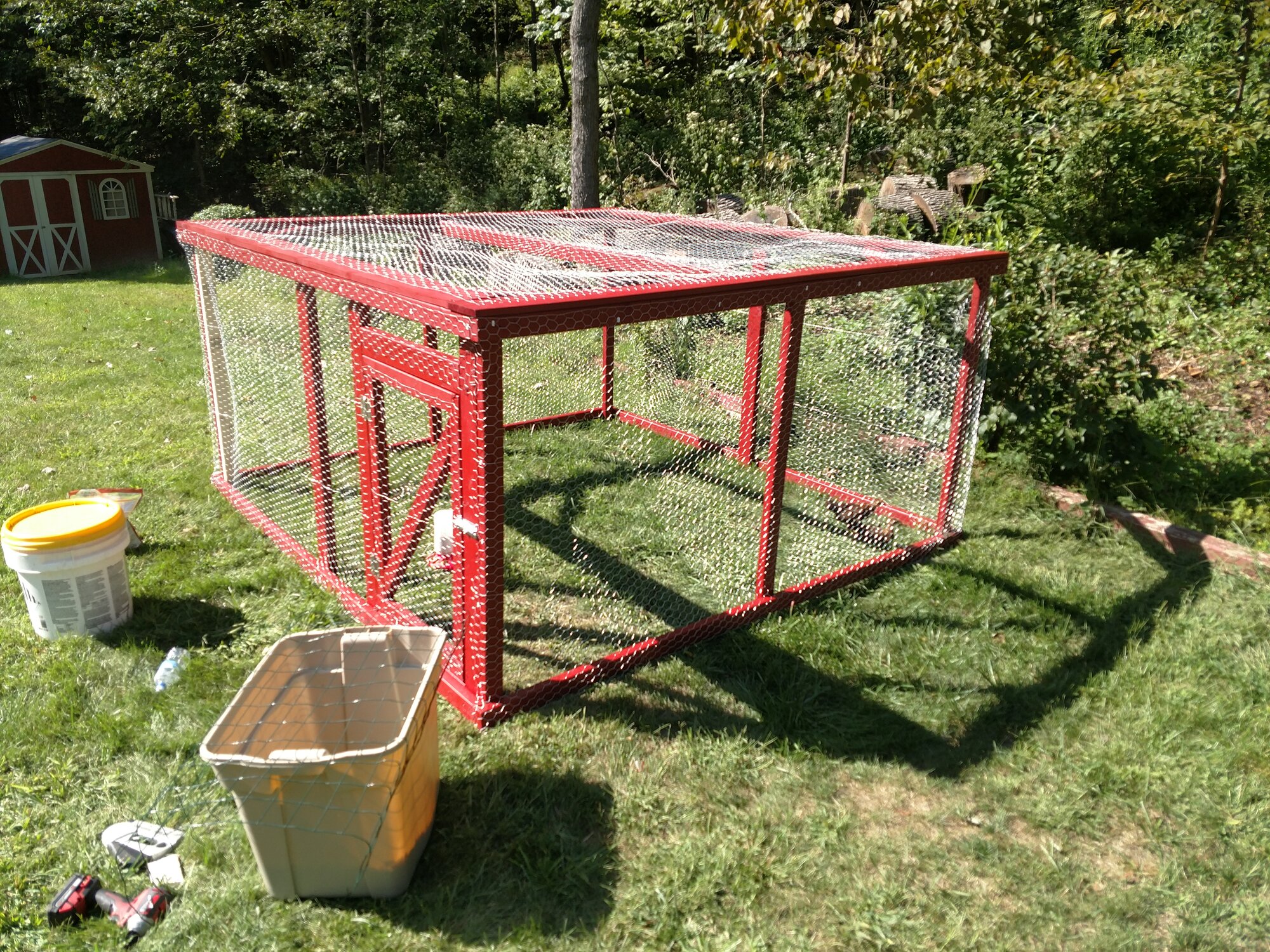 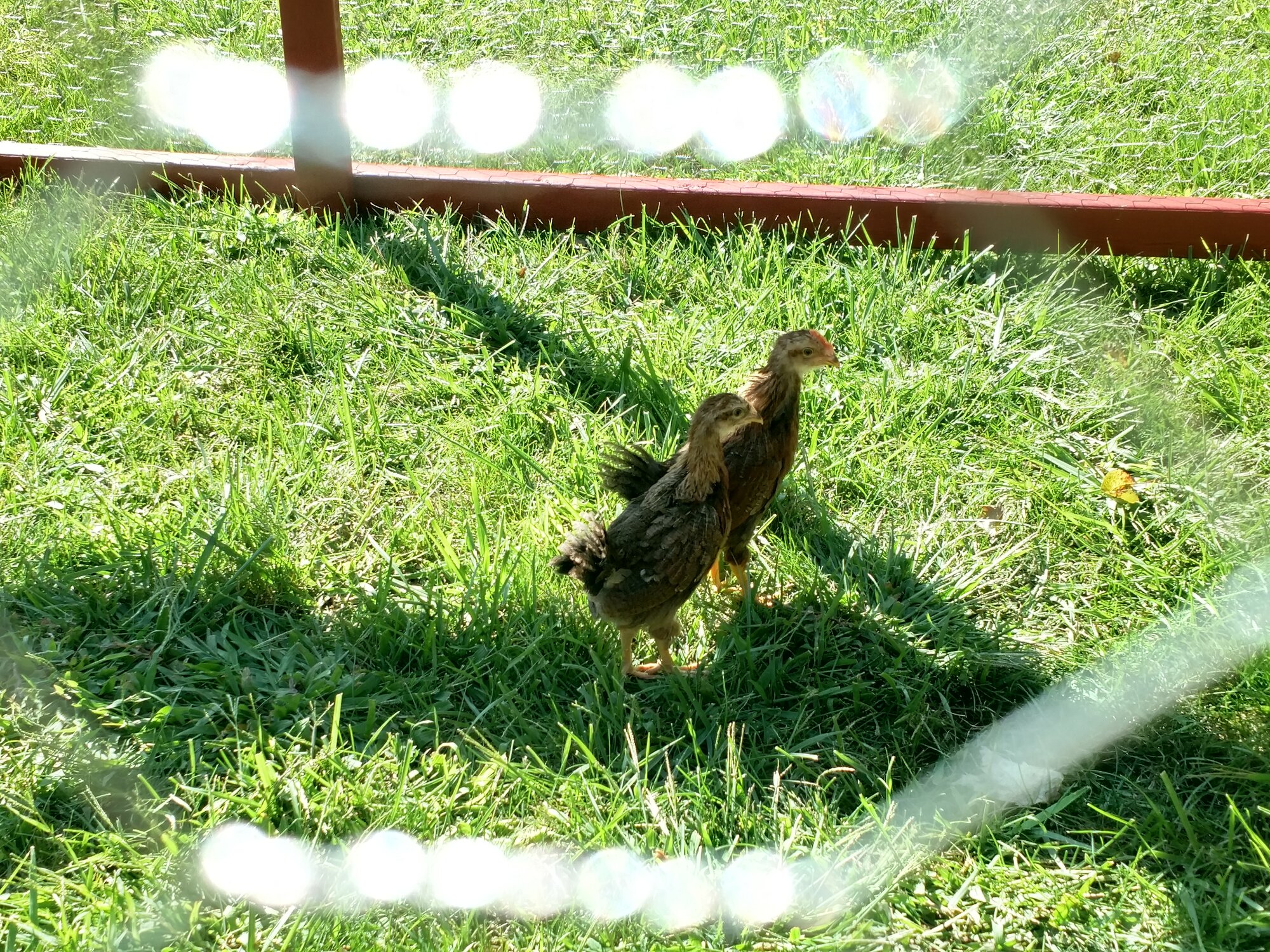 This is the first time they haven't been in a controlled environment so I just want to make sure I'm not missing anything important.

Again, I only have two birds (one hen and one rooster) but I will be getting a couple more hens of approximately the same age within a few days.

That plastic tote in your photo... if you could put it inside the run on it's side it would make a nice little shady spot for them as well as block any wind. Make sure they have access to water.

I would provide them grit, sometimes they can get good grit from the soil, other times not so much. It really depends your soil. After awhile I realized my chickens weren't eating the grit I supplied them so I stopped buying it.

I'm not sure your current temps, but if they are huddle up and/or standing on one leg, they might be getting chilled and need to go in for a bit. They are probably loving exploring outdoor life so far though!

As long as you can keep an eye on them and/or check on them, they should be just fine.

I'm not sure where in the world you are and what potential predators you have, but just know that even when we think we have them protected, sometimes things can still happen, and unfortunately there are a lot of predators that can't be stopped by chicken wire.

Have fun with you littles!

smart thing would be to put wheels on it so it's easy to move so they don't eat all the grass down to the roots in one area and move it every couple of days too, but they definitely need a place with some sort of Shade and a way to get outta the weather. I just took a half piece of plywood and set it up and put a tarp in Shape so it was partially on one end and one side which they were most likely to benefit. Looks like they do enjoy getting bugs and grass, but they need some chick grit available to help with digesting their food. Enjoy your babies growing up

I completely agree with @PirateGirl
I would offer them grit, make sure they have cool water and some form of shade, then sit back and have fun watching them.

Not seeing water and food in the run, but maybe you put it in after you took the pic? They need shade and a windbreak, I'd throw a tarp over one corner. You're just going to have to crawl in there to catch them in the evening .

Thanks so much for all the replies! Extremely helpful. I live in Pennsylvania, my soil is clay in some areas and sandy in others. Temps right now are about 70ish, a little warmer in the sun. I have added their food and water containers since I took the picture. I also threw a towel over one side as a windbreak and to provide shade.

Slordaz, I was actually thinking about buying some lawnmower wheels so I can pick up one end of the enclosure and wheel it around more easily.

Once I get their coop built sometime in the coming week or so, I plan on making it so that it can be easily attached and detached from the run.

As far as predators, during the day I'm mainly limited to hawks, and as long as the chickens are in the run, the hawk won't bother them as there are easier meals to be found. If the hawk really wanted to, it could probably pull out the chicken wire but it would take a lot of work. At night I have raccoons and coyotes, but the chickens will not be in the run at night, they will be in the garage or coop.

Obviously I can't sit with them all day (as much as I'd like to) but I will be checking in on them every few hours.

I will go out and buy some grit this evening just to be safe. 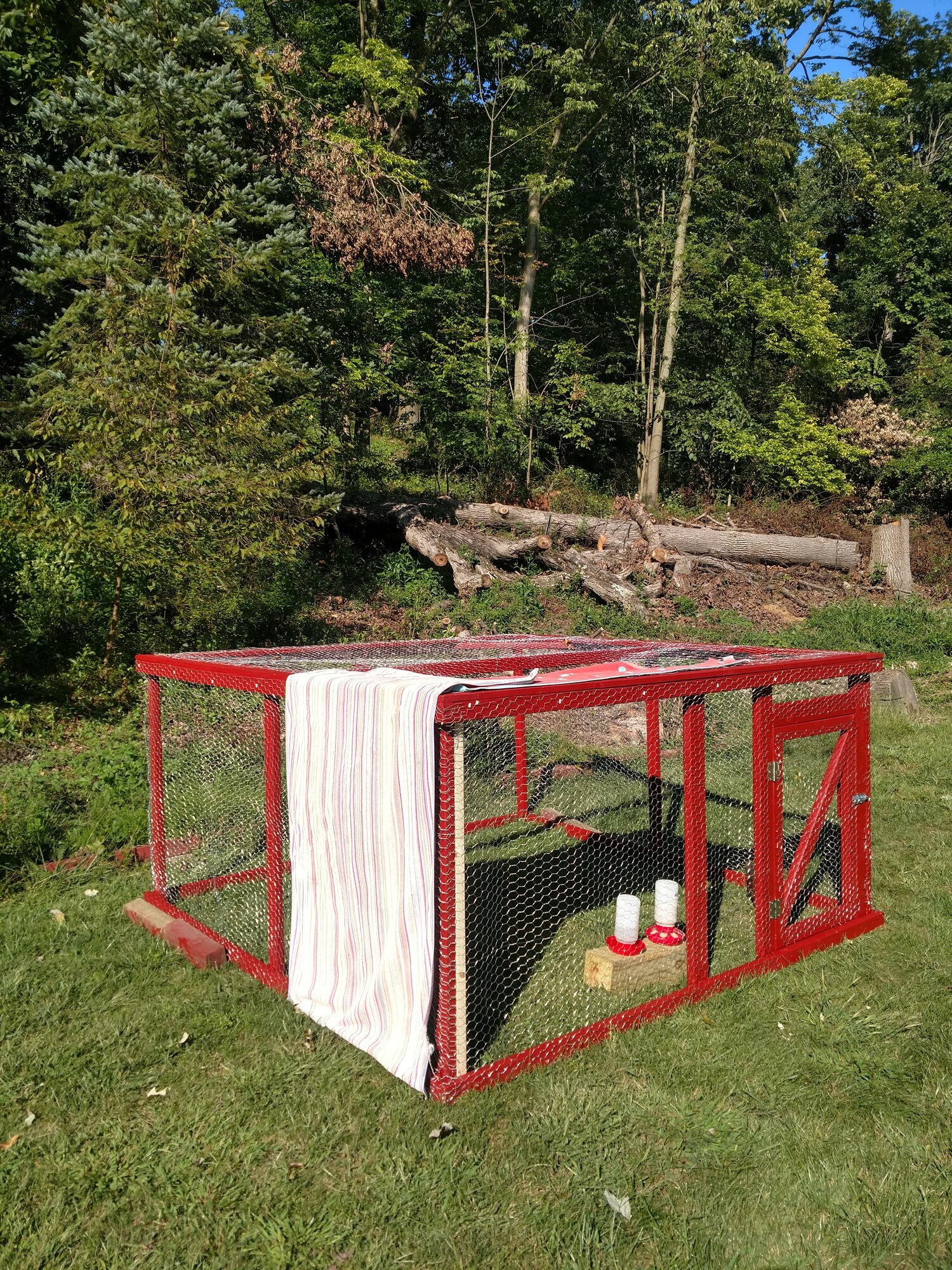 So I did make a run out tonight and bought some grit. However all I could find was high calcium grit, which I've read isn't good for young birds. I bought it anyways and did offer it to them in the cap, but they haven't touched it yet. I will make a trip to the actual feed store tomorrow and make to get some regular chick grit for them. 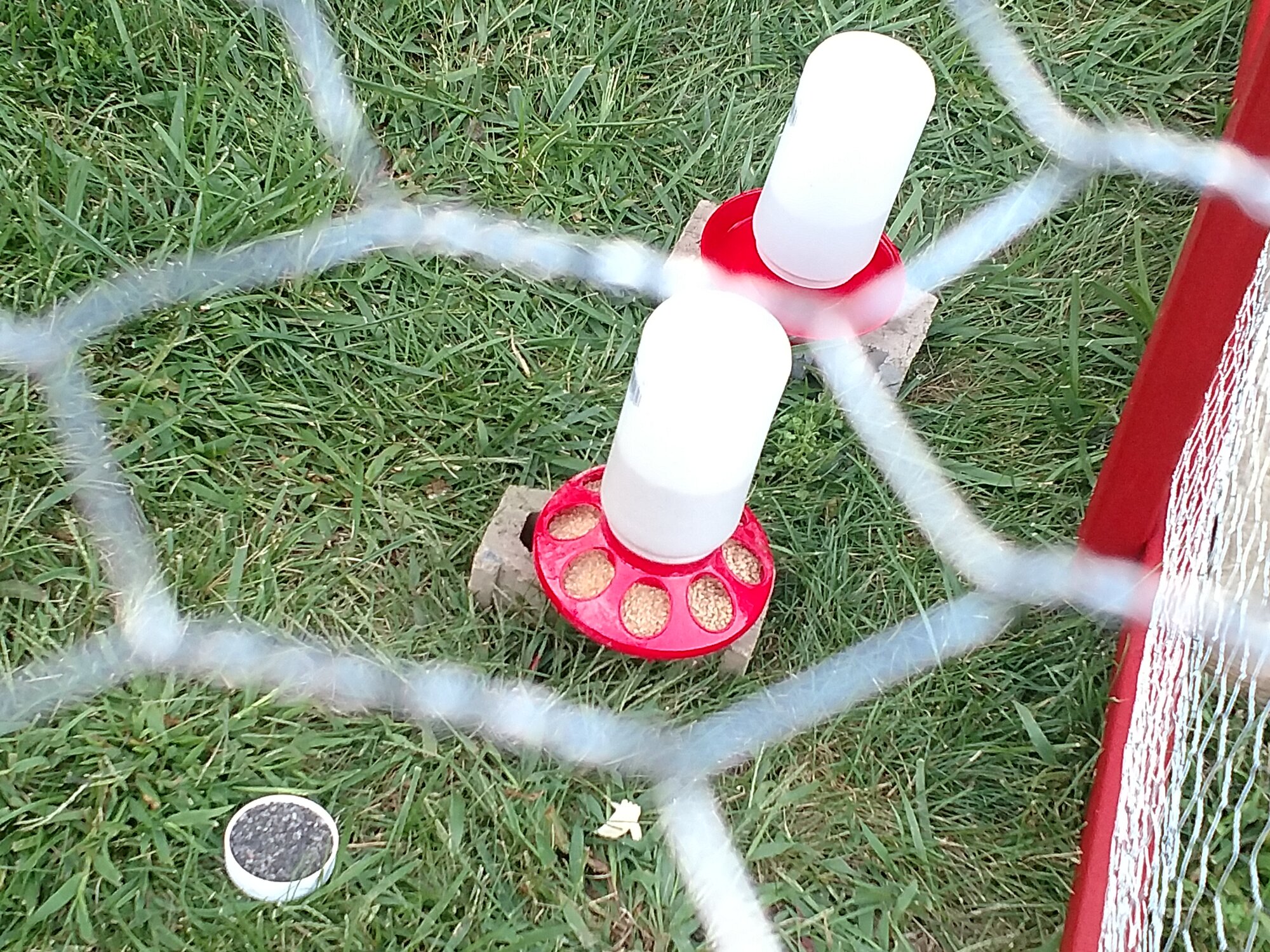 Dont put the plastic tote in with them. The wind could blow it over top of them and then they could be traped under it. Baking in the sun.
Nice job on the enclosure.
I might be worried if you have loose neighborhood dogs tho.
Chicken wire is weak and dogs coyotes, fox and racoons can literally rip it to pieces. For your permanent chicken coop and run, hardware cloth is secure against almost everything but bear.
Congratulations on your new chicks!

Thanks, I'm pretty happy with the construction of the run.

I'm only using the bin for transport to and from the brooder. Fortunately there are no loose neighborhood dogs, but racoons and coyotes are very real at night. But the birds will be inside a coop (or the brooder for now) at night.

I'd only have them out there when I was also outside with them, because of the risk of predators other than hawks. Keep them safe!
mary

U
My chicks are tweens... when do I let them hang with the big girls and rooster?

B
Injured chick, should I do anything?

M
Do I have to lock them in the coop for days??