Just put my second generation in the incubator!

Four have hatched, looks like 2 Rosetta tuxes, and an red wild (Egyptian?) maybe and scarlet dirty tux. Another is hatching, it looks like another rosetta tux.

All right, I got up this morning, and there were 11 chicks. I removed them and moved them to the brooder. 2 eggs look like they tried to hatch last night, but instead of zipping they made a big hole in the side of the egg, but the hole was facing down and the membrane wasn’t really broken, it looked pierced in the original pip spot, but then the rest of the hole was only shell broken. I tried helping them, but they appear to have passed several hours before. One egg is still good I think, sounded like it was moving around, so I left it in, we may have 12.

is there anything that can be done to prevent this zipping issue? I had 3 like this last hatch too, instead of working around they just chipped out a bigger hole, maybe they hadn’t broken into the air sac and they suffocated? The pips look to start in the right place more or less, but I think the chicks head was oriented toward the wrong side. The criss cross of the shelf liner kept the eggs from being kicked all over, the eggs didn’t look like they were moved. 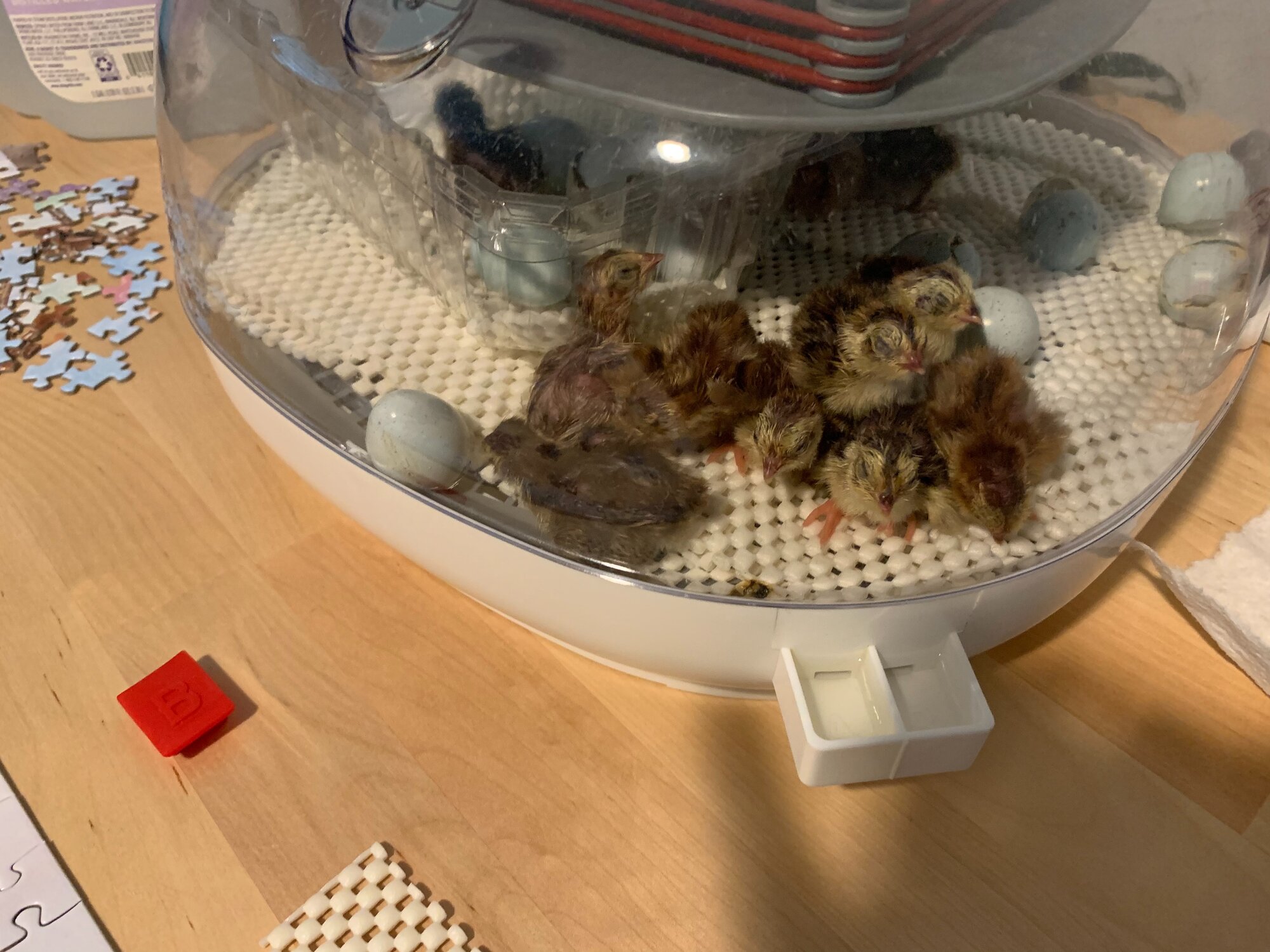 That sometimes happens if the chick inside is malpositioned or some other issue with the chick itself. I don't think there is anything you could have done.
F

So one passed, soon after I put it in the brooder. Since they hatched at night, I’m not sure how active or normal it was previously. This happened with one last time too

Idk I think this one is not going to make it, it’s still alive, I’ve been chipping away slowly, let it rest and struggle, but it’s not struggling hard enough to sever the vessel connections it just isn’t strong enough. I’ll keep watching but last time my shrink wrap struggled free as I unstuck the membrane and it ended up normal size and healthy as an adult, this one should be flexing out as I give it more space and it just doesn’t seem to, even if it lives I fear it will be special needs.
F

He has been out of the egg for a couple hours now. At first I thought he was a goner, he didn’t even try to get out, I had to gently tilt him out, then he laid there weakly thrashing and twitching every so often. I got all his parts unstuck from his other parts, like his wing was glued to his face and he couldn’t get it off, all parts are operational.

So I’ve been checking him every 45 mins or so, I offered him some sugar water hoping he would get a surge of energy to right himself. He has started peeping now finally and he’s thrashing harder, I hope he will get onto his feet soon. He is still in the incubator.
F

Thank you all for watching! I will start a new thread for the new eggs in the incubator. Final score: 11 chicks. 9 from Red, 2 from the pretty eggs. The sickly runt is doing well, and has been moved to the main group, overall he looks about 2 days delayed, still equal in size to many of the ones who hatched Tuesday, the four who hatched Monday are bigger, his feathering is only now starting but the others have been showing signs for 2 days. Other than that he seems normal.
You must log in or register to reply here.
Share:
Reddit Pinterest Tumblr WhatsApp Email Link