halefamily_flock said:
I've thought of doing that, too. Unfortunately, I think it may be a while before I can get something setup in another area on the farm.
Click to expand...

A small coop works good to if you have one. You can tarp off one side, so the boys don't see each other. 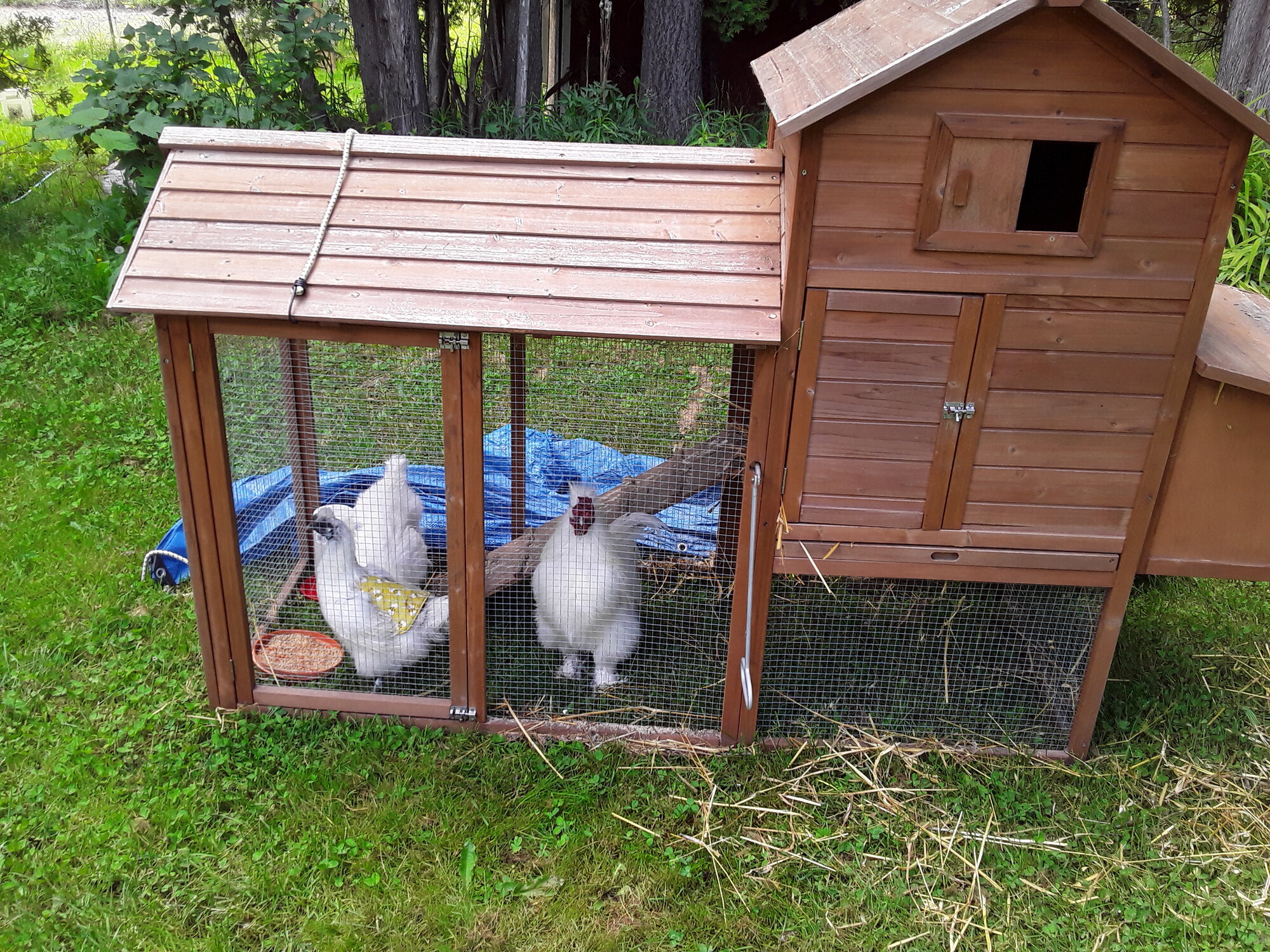 Example. The tarp is there, just not lifted up yet.

SBFChickenGirl said:
I just realized I got names and pictures mixed up LOL. I meant Crazy Train....

Olaf is stunning as well.

Lol Crazy Train is a character. He got the name because he looked so crazy, compared to the others, and also like a rock star. I think it's evidence that at least one of our Dominiques wasn't fully "Extended Black" and I also think he's Elvis's son, with that huge crest. He's the most assertive of the cockerels, the best crower, and so much fun to watch!

NatJ said:
And It's a very good example of how the "wrong" sex ratios can be a problem or just fine, depending on the exact conditions.
Click to expand...

halefamily_flock said:
For nearly a year, I have had a free ranging, predator savvy flock with with access to 100+ acres & an automatic chicken door that lets them out in the morning and closes them in at night. My four 9-month old roosters, raised together, had co-existed peacefully with fewer than 25 hens between them. I love how easy they were to manage and how many roosters I was able to keep! However, as I started hatching my own eggs, I didn't want to leave it up to the flock to decide which roosters sire my chicks, so I started experimenting with a breeding pen. I learned, the hard way, the dangers of putting a low ranking rooster in a pen with "someone else's" hens, especially within sight and in a way that feels like they're all still hanging out together. One morning, I was shocked to see how much blood one rooster had flung inside coop walls and dripped all over feeders, waterers, roosting bars and the hens he was roosting with. I had seen the battle (which was taking place THROUGH the flexible fencing of the breeding pen) and separated the roosters and locked them in their respective coops the night before. It wasn't until the light of day that I realized how bloody the battle had been.

Fast forward 30 days...I now have 3 of the original roosters (circled in red) and three 15-week-old cockerels (in yellow) all living peacefully together. Elvis used to be #1, but our new #1 (Gimpy) is a much better leader of the flock. He keeps everyone in line with minimal aggression.
View attachment 2423433

Here's how I managed them:
Yesterday afternoon, just before dusk, I gave Elvis one final chance to stay. I let him and the Sussex out of the pen, tossed treats around to bring the flock together, and watched to see what would happen. Nothing! Elvis had accepted his position as #2 and Gimpy didn't seem to have anything left to prove. Other than a few very minor scuffles, they all went about scratching for the treats I threw out, with all 3 of the roosters trying to win favor with the hens but not at all focused on each other. At the same time, Crazy Train, the top cockerel, attempted to mount a few hens, who chased him off. Olaf and Fancy, the other cockerels, were trying to look cool while getting bullied by hens. The big roosters didn't seem to pay any attention to any of them.

So, for now, I have technically too many roosters, and I'm expecting to hatch a few more (along with more hens, hopefully). But my hens are holding their own, and the roosters are living in harmony, working as a tag team to protect the flock from a couple of hawks that have been relentlessly stalking for weeks now (only one casualty so far). These are heritage breeds who have survived for hundreds of years, so they must have been able to live with "too many" roosters, at some point. Let's see how it goes.

I like this style of work, thank you very much

I agree with Aart. I have seen a flock like this, and it seemed pretty successful. But the space and set up was key. If you have a lot of space, where birds can leave, hide, and find food easily it helps.

It's been almost 3 weeks since the bloody battles, rooster timeouts and successful reintegration into the flock. The 3 adult roosters continue to get along, and have largely ignored the 3 teenage boys as they try their luck with the ladies. For the most part, the hens have handily put the boys in their place, in battles that sometimes look like they could have been between 2 roosters. I guess the boys must have gotten a little too frisky with someone's girl

See if you can pick my two "gimpy boys" out of the crowd...


They appear to have taken a spur to the thigh. It's nice there is no blood, no noticeable damage to comb or wattles...doesn't seem to be any hard feelings, either

As my 3 cockerels have become sexually mature (in a flock of 25 hens and 3 other roosters), I've been keeping an eye out for issues. As is necessary in a flock of too many roos, I have an extra pen, ready to separate troublemakers at a moment's notice. I generally offer a time out period of a few days, and a second chance, followed by freezer camp for any continuing bad behavior. I also always know which of the boys is next in line to go if, for the good of overall flock dynamics, we simply need to reduce the rooster to hen ratio.

Meet Fancy, a 4-month-old Spitzhauben-Dominique cross who is next in line for freezer camp. His single comb helped me figure out that some of our Dominique hens were heterozygous for rose comb, which I appreciate, but also means I won't be keeping him for breeding. A few weeks ago, he started getting a little too frisky with the girls and I thought it might be his time. Then, the other roosters intervened and got him in line, so I decided to leave him be. He is currently ranked 5 of 6 in pecking order by the other boys. 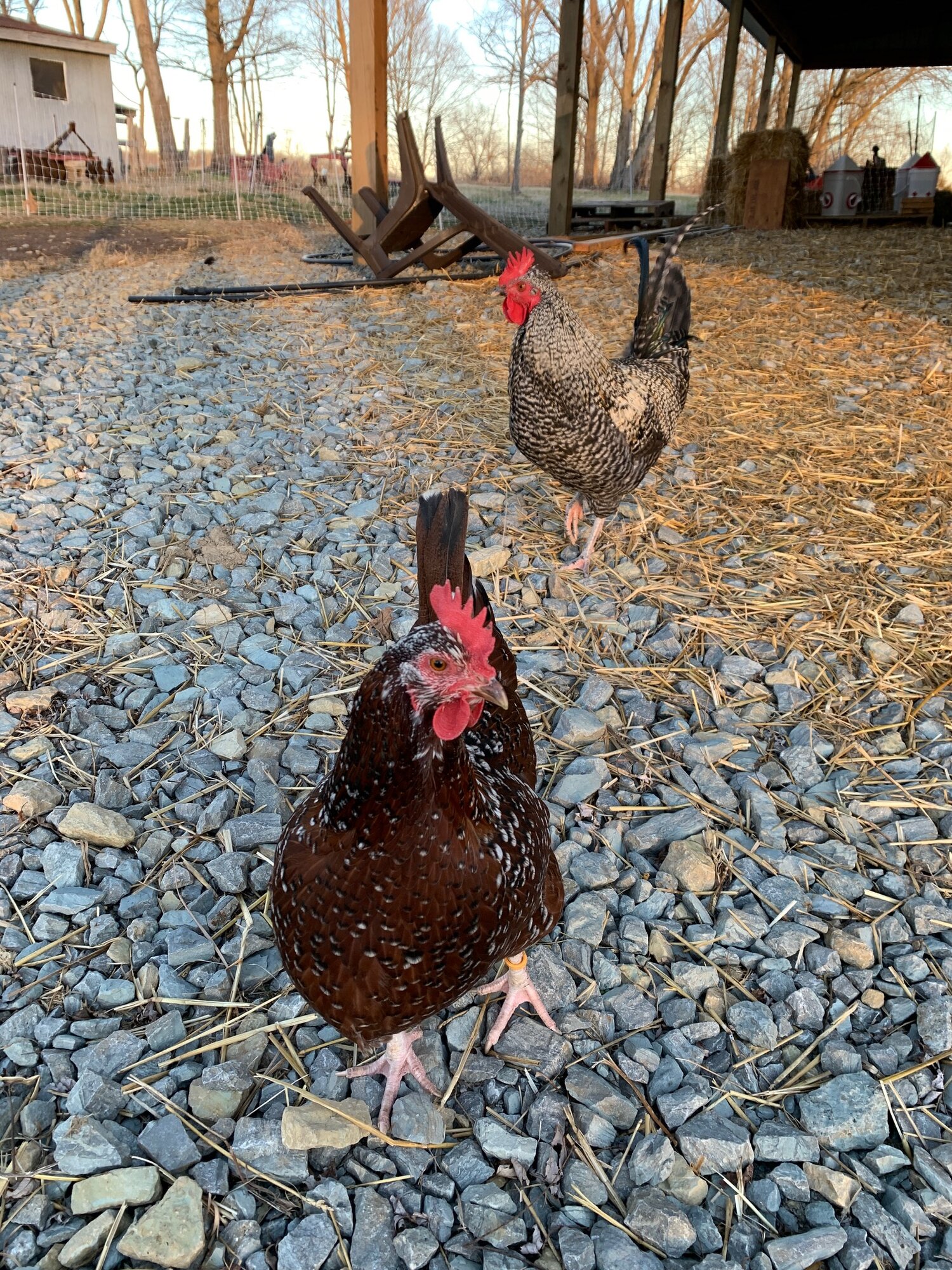 This week, I noticed him hanging around one of our Speckled Sussex girls (Speckles), who otherwise tends to be a loner. I was surprised and delighted to find Fancy (previously much more rapey toward the other girls), intent on winning Speckles over with treats & tidbitting, spending most of his day with her.

The only loss we've ever suffered from a predator was one of our other Speckles, also a loner, who was taken by a hawk a few weeks ago. In general, our Speckleses (most of the chickens have names, but any that look the same get the same name) are independent, confident and a bit careless as free-rangers. They also tend to be quite picky with their boys and don't abide any nonsense, especially from young cockerels. I like having him as her personal bodyguard. I guess he gets to stay a little longer.

At 5 months old, Fancy and Crazy Train are no longer with the flock.


Their brother, Olaf got to stay. 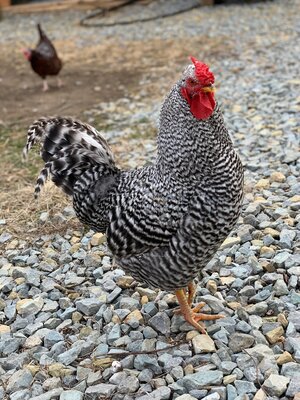 Here is their story...

As the 3 cockerels approached 5 months old, they were generally being held at bay by the older roosters. Fancy (Pecking order #5 of 6) has been smitten with Speckles for the last couple of weeks, spending most of his days alone with her.

Likewise, Olaf (#6 of 6) developed a crush on one of our most independent Hamburg girls. They paired up and spent most of the day together. I don't have a photo of them together, but here she is... 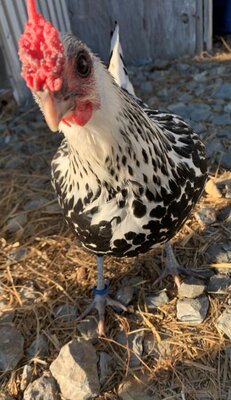 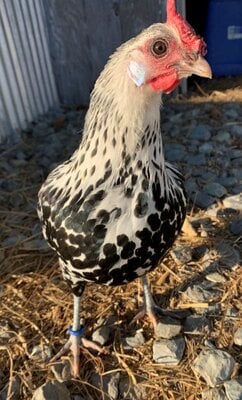 Crazy Train (#3 or 4 of 6) was pretty much chasing tail all day long, somehow managing to avoid any major confrontations with the elders.

Then, over the last week or so they all started getting increasingly ambitious during "frisky hour" just after sunrise and just before sunset. Mornings weren't terrible...they chased some tail on the outskirts of the flock while the elder roosters were busy chasing their own favorites, but the hens generally escaped any unwanted attention, with plenty of room to flee or hide (or battle it out, as they choose). They're pretty bad a$$ girls, so can generally take care of themselves.

The big issue was evening frisky hour. The 3 boys would wait until the elder roosters went inside to roost and then act like bouncers to the chicken door, tackling hens as they approached (sometimes 3 on 1!). It got so bad that several hens were finding other roosting spots, outside the secure coop, that seemed safer than having to approach the boys. I was having to wait until dark and manually carry them, one by one, into the coop and place them on a roosting bar once it was too dark for the boys to find them.

So, I arranged for my brother to come over this weekend and get the 2 next in line for freezer camp. (He's an experienced hunter who processes his own meat and does my dirty work, when needed). .

In the meantime, I checked my state's facebook chicken swap & barter page for demand in the area, and managed to sell both boys to lovely people who needed them to help protect laying flocks. I sold Fancy as an add-on to 2 lovely Dominique hens I was culling from my breeding program, to give their new chicken parents the confidence to let them free range.

Crazy Train went to a flock of 35+ laying hens that had recently lost 2 roosters mysteriously, to predators? (no one knows). His new chicken mom and her young son were amazed and excited with how tame he was compared to the other roosters. They had never held a rooster before & at first were nervous about feeding him treats from their hands, but I think they're likely to start treating their whole flock now that they know how fun it can be.

I never expected such happy endings to my extra cockerels. I made enough money on each sale to buy an already butchered chicken I had never met, who had been humanely raised. When I started my chicken operation, and especially when I decided to start breeding & hatching my own, I assumed I would have to kill some. Of course, I figured out the most humane way to do it and planned to do it as little as possible.

But, maybe...just maybe, it's possible to be a no-kill chicken operation. My brother is always there, as a backup, willing to take an unwanted chicken off my hands. I have so far been extremely lucky in my proportion of pullets in each hatch
(read more about that here: do-happy-hens-hatch-more-females-we-want-to-hear-your-stories-if-youve-been-lucky-hatching-pullets)

And now, very lucky in finding new flocks for my extra roos, just in time.

I really enjoyed reading this. I've had way too many roosters and cockerels for way too long. I'd love to let the boys free range together but the bantams are absolutely relentless in fighting with the LF. The LF almost seem to realize the bantams are so much smaller, but even after the LF step back from fighting, the bantams seem to want to finish things for good. I'm curious about how this situation would work with LF and Bantam Roosters and Cockerels.

How long until young rooster and 4 hens make friends?