Background: We received an assortment of 5 two week old chicks about a week ago, they've been doing well. Running, eating/drinking, exploring, and running from hands. They're in a repurposed dog kennel in the house with a heat lamp, on medicated chick starter, have access to grit, pine shavings for bedding, vitamin/electrolyte/probiotic mixture in the water every other day, occasional snack of mealworms that they LOVE.

Problem: Yesterday afternoon one of the chicks started acting odd, every few seconds she would chirp sounding distressed and shake her head and flap her wings. She would try to jump up on the roosting bar but continue to flap and fall off. I could not find anything wrong on her body on inspection but she continued this for a few hours. She stopped the chirping flapping behavior but has been very lethargic and sleeping since then. Prior to the start of this they would usually sleep for a few minutes at a time and then run around, but shes been constantly sleeping. She doesnt run from hands when I pick her up (unusual for her) and ignored the offer of treats (also unusual). I tried taking them outside for a bit and she immediately fell asleep while the others explored. This morning I saw her take the smallest nibble of food but nothing since, I've tried dropping water mon her beak and she ignored it. Tried massaging her crop and it doesnt feel like theres anything in there. The poop I saw looked watery but normal otherwise, and vent looks good. The other 4 are acting normal and havent been bothering her so i havent separated. Anything I could be missing or anything else I can do for her? Not certain she is going to make it since its already been basically 24 hours without food or water

Included pictures of her and of the set up. They only huddle when they sleep and it's not directly under the heat so I dont think they're cold. 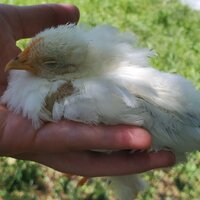 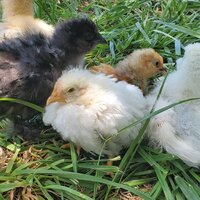 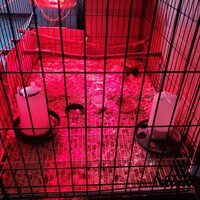 I would continue to try to get her hydrated.

M
Chick lethargic, how to diagnose?