Here's how it happened. I live in a rural area in central Texas. My neighbor (across the street) got two chickens. He has a "coop" but it's a wreck. It didn't contain his chickens and they kept coming out into his front yard. They spent more time in front than in his back yard. He would occasionally try to corral them back into his back yard but they wouldn't spend much time there. I had some mealworms that I'd bought for the wild birds and decided to walk over and give the chickens a treat. (I didn't know, at the time, that mealworms are sold as a chicken treat.) After that, they would start to come across the street (it's a very inactive street with few cars and little traffic) whenever I would go outside. I'd give them mealworms from time to time and, eventually, they discovered the wild bird seed that fell from the feeder. As time went by, they were spending more time in my yard than in my neighbor's yard. I talked with the neighbor and promised not to feed them anymore, but that didn't keep them at home. Long story short... They now spend most of their time in my back yard. Yes, I'm now feeding them regularly. I don't want them to go hungry. My neighbor knows they're in my back yard and I have invited him to come and get them at his convenience. He hasn't. I've sent him a text message and a Facebook Messenger message asking if he'd like to sell the chickens. Clearly he has little interest in them and little desire to properly house and care for them. So now I, technically, am caring for two chickens who spend 95% of their time in my back yard. In the morning I find them in the front yard, but then they come into the back yard. I feed them proper chicken food (which closely resembles wild bird food) and give them some mealworms every day. I have some special chicken treat food that they really don't seem too interested in. And they have a bowl of water they can easily access. They seem quite happy with the situation.

I am now in the process of learning about chickens, and trying to set up some sort of coop or hutch that I'm hoping they will use at night. So far they are very-free-range chickens! It doesn't get very cold very often here in central Texas, so I don't think we need to worry about the weather. I'm hoping that I can learn from some of you folks.

My first issue is the coop/hutch. I don't have a lot of money, and I don't know if I want to build a coop myself. I could, but I'm 64 years old and just don't have the desire to do that sort of thing much anymore. I'm going to start with a medium/large plastic doghouse I've had forever that nobody ever uses (I have dogs and cats). I'll put some hay or something inside and put it where the chickens like to sun themselves during the day. Is there some way to "encourage" the girls (who I'm now calling Thelma and Louise) to use the dog house as a hutch?

I'm going to shut up now. Thanks for reading, and thanks for any help you provide now and in the future.

P.S. I still intend to return the chickens to my neighbor if he really wants them, or pay him for them if he agrees. Oh, and I'm not too concerned about eggs since I don't even eat them very often. I think these girls are about six or seven months old.

A book I bought on Amazon.com: Backyard Chickens for Beginners by R.J. Ruppenthal

I don't have any, really. I like to muck around with my computer a bit. 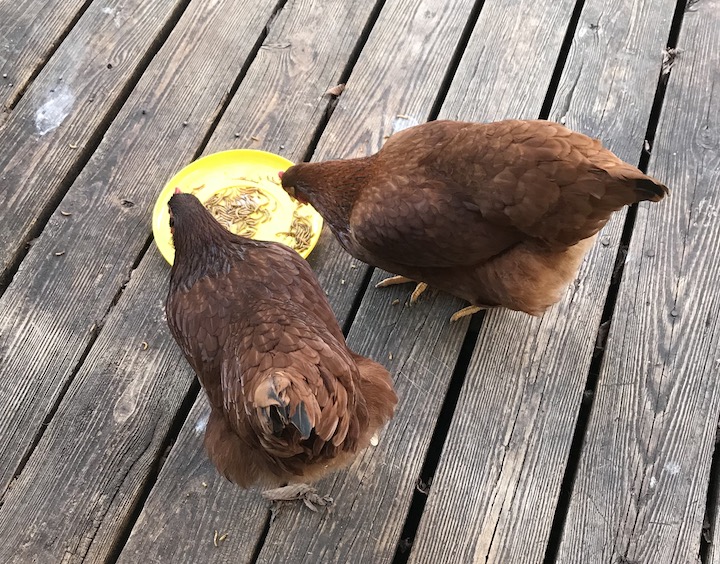 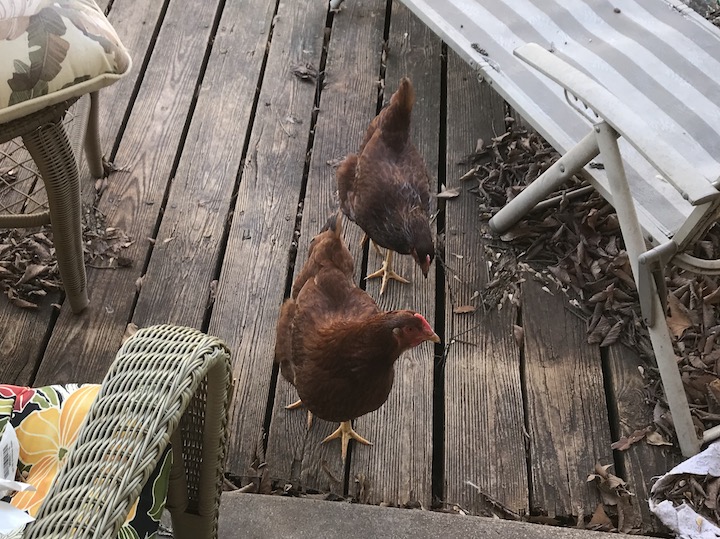 Welcome to BYC!!
So glad to have you here!!
Thanks for sharing your story!!
There are many people on here that are ready to help in anyway they can!
The learning center also has alot of great information on it as well!
Enjoy!

Hello, welcome to the forum! You’re doing a wonderful thing caring for these chickens.

It seems your neighbor couldn’t care less about their whereabouts. I would recommend seeing if he would be willing to sell/give them to you. Chickens crossing the road is very dangerous, even if they actually have a reason (horrible attempt at a joke

As for a coop, they could definitely use the dog house, as long as it’s predator proof and big enough (about 7 square feet is good). I would recommend using pine shavings in the bottom. If you look up a basic coop set up, you’ll get the general idea. If your neighbor does give them up, keep them in your yard (beware of hawks). At night, simply put them into the coop. In a few days, they will learn to go in by themselves. Also, try and not feed them mealworms too often. They are healthy, but layer chicken feed should be there main source of sustenance.

They look like Rhode Island Reds to me, which is a basic farm chicken breed. A great beginner bird! I hope that everything goes well, and feel free to ask questions!

Hi Sue, thanks for joining us! Sounds to me like Thelma and Louise have adopted you

If you haven't found it yet, the Learning Center is a gold mine of information:
learning-center.11

And of course always feel free to ask questions, everyone is here to help each other.

Best of luck to you, thanks for caring for your new feathered friends!

Hi Sue and welcome to BYC

What a nice intro and such a kind heart to take care of them. How big are the holes in the dog crate? Raccoons are pretty ingenious chicken eaters and can reach through 1" holes. So what kind of chicken feed do you have them on now? Is the crate tall enough to put a perch in without them hitting their heads?

Always happy to see another vet out here on byc, I was an AF Aircraft Maintainer and retired under the VSI program in 92. What was your specialty? Again, welcome and just let us know if we can help you in any way.

to have you join the family. Enjoy your time here!

welcome to BYC!! Thelma and Louise sound so cute! Glad your there to look after them. Seems like your neighbor doesn't much care for them. Best of luck with them