First time posting but I've been lurking and learning for awhile.
I started with 4 light Sussex hens early this year. When winter came I didn't like how unprotected the coop that came with the house was and bought one that was supposed to be big enough for 8 to 10 chickens but turned out to be just big enough for the 4 girls. When one hen stayed broody for 3 weeks, no matter what I did, I got her 3 day old chicks, one australorp, one sussex and one brahma, and one week old Australorp. After the initial shock she was a really good mom. The other hens weren't as happy and I had to move them back to the old coop. It was warming up by then so I didn't feel too bad. They were still all free ranging together. After 6weeks mom got sick of the chicks and moved herself to the big girl coop. One night I lost two broody hens to a fox and the next day while free ranging the darn fox got the brahma

So know they are confined to the two coops and runs and no more free ranging. We are moving in to our first house this januari and luck has it that it has a huge coop and run. It also has one leghorn in it. I'm putting fox proof fences in when I can, I really miss the free ranging.

I am looking for advise how to put them all together. I figured while putting these together I might as well add some more new ones, so it'll be 2 year old hens, 3 three month old chicks, a leghorn and maybe 3 or 4 new ones. And maybe a rooster but I'm still researching that.. I thought to wait till it's dark and put them all together and then watch them when they wake up. Is there a chance that this will work?

Sorry for the long story!
Thanks for any advice

A "see don't touch" thing works well, where they can't access each other for a few days/weeks depending on how they interact.

The flock will be in flux for a little while when you move, and that could work to your advantage in integrating the new hen. It all comes down to the individuals involved.

Normally we'd say quarantine - but since it's your birds moving to a new house where they'll have to adjust to whatever is on the new land and in the new coop no matter what, I'm thinking that's not applicable. The existing leghorn is already 'quarantined' by virtue of having lived there. Do watch your flock carefully for signs of illness in those first weeks.

Think of it like two separate grade school classes from two different schools going to the same planetarium field trip - class 1 has built immunity to the viruses etc. in their environment and class 2 has done the same … but then the two spend time in the same place and are vulnerable to the very 'bugs' the other has immunity to -- all appear healthy (because they are) -- and then they're exposed to the new thing.

Thanks for the reply! I'll definitely keep an eye out for any illness.

So would it be better to do one group at a time? For example the leghorn and the two hens and once they can be together the young hens and then last the new group? Or should I try to divide the coop and run in 4 separate area's and do I at once?

Thanks for your help.
Trish

Henny3 said:
I am looking for advise how to put them all together. I figured while putting these together I might as well add some more new ones, so it'll be 2 year old hens, 3 three month old chicks, a leghorn and maybe 3 or 4 new ones. And maybe a rooster but I'm still researching that.. I thought to wait till it's dark and put them all together and then watch them when they wake up. Is there a chance that this will work?

Yes, there's a chance that it will work. (But be prepared to separate them if it doesn't work.) My personal guess is that it will work just fine, and I notice you're already planning to watch/supervise. If it does work, it's certainly the fastest and easiest way.

Having multiple feeders, multiple waterers, and various places for birds to get away from each other are usually recommended-- even cardboard boxes sitting around, just so they can get out of sight of each other.

I might expect either or both of these problems:
--Leghorn picks on newcomers (but there's only 1 of her, and lots of new ones, so maybe not)
--2 hens pick on leghorn or on babies (but there's only 2 of them, the Leghorn is on her home ground while they are newcomers, and there are more babies than any other age group, so again it might not happen.)

If it was me, I'd stick them together like you suggested--and be prepared to separate if needed.

Henny3 said:
so it'll be 2 year old hens, 3 three month old chicks, a leghorn and maybe 3 or 4 new ones. And maybe a rooster

I thought to wait till it's dark and put them all together and then watch them when they wake up. Is there a chance that this will work?

Welcome to the forum and thanks for providing enough information so we have an idea of what you are dealing with.

I don't know how big that "huge" coop and run really are. Since you are not moving for a while you probably don't know how big in feet or meters they are or have photos. That could help but you gave us a lot to work with. Often integration goes really smoothly. Most of what you read on here are the times it doesn't. The more room you have the more likely it will go smoothly.

They will sort out the pecking order. The young chicks will automatically be at the bottom and will probably try to avoid the older ones until they mature enough to force their way into the flock. Are you sure all of them are female? Your rooster might come from them. At three months you should be able to tell.

How violent the others are about sorting out the pecking order is a great unknown. There may be some vicious fights or bullying, it may be some chasing and running away, or you could see no conflict whatsoever. Even if they were all integrated before the move you might see some change to the pecking order because of the move.

I don't know the logistics of your move. Will you have time to build any new facilities to separate them before you move them over? I expect you will be really busy. Is there an alternative place you can put some if you need to separate them? I'd guess some are laying and you want to teach them to lay in the nests, not somewhere else.

In other circumstances I'd suggest you put them all in there during the day when you can be around to observe. Often that works, especially if the coop and run really are huge. But sometimes it doesn't and you need to separate some, but that gives them as much room as you can. Are you going to be so busy you can't do this?

If you lock them in the coop at night they will not have nearly as much room to run away and avoid. As long as the coop is dark it won't matter, but I'd want to be down there really early the next morning to open the pop door and see how it is going. A lot of the time this method does work, but since space is limited when it doesn't work it can get bad quickly. You will still need to observe but maybe this fits your move schedule better.

If you are going to add more chickens I'd do it at the same time if you can. They are going to sort out the pecking order. Get it over with.

Good luck with it.

Thanks so much for your reply's!
We just had our first lamb born! But back to the chickens.

I knew when I put down "huge" it wasn't a good term and probably not considered huge by some of you. I don't know the measurements or have a picture sadly and am really horrible at guessing. But I think it's big enough to section a bit off and put the little coop in there, or connect it, for the "see but don't touch" method if it goes wrong.

It has some cement planters in there and I was thinking about putting some pallets and roosts in there too so they have places to run too.
We have about a month to move into the new house and renovating the chicken coop and get fox proof fences are the first things on the list.

Can I put them together during the day? I thought night time would be less stressful for them but if it doesn't make a difference it would make it a lot easier to do operation chicken during the day!

I just did the math and the young once are 4 months old, I think they are hens. How can you tell for sure they are? I've added some pictures.

Thanks for all the help! 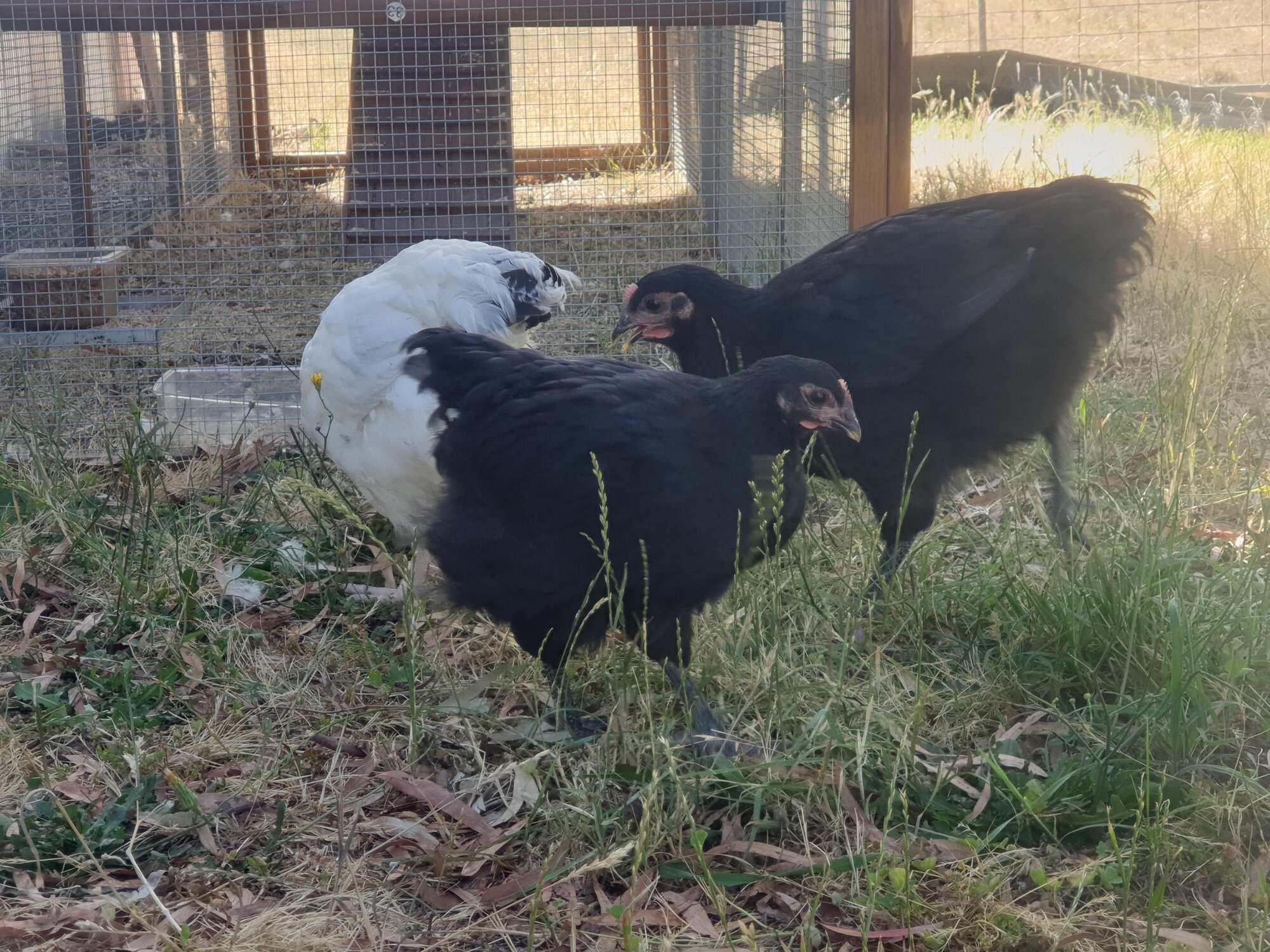 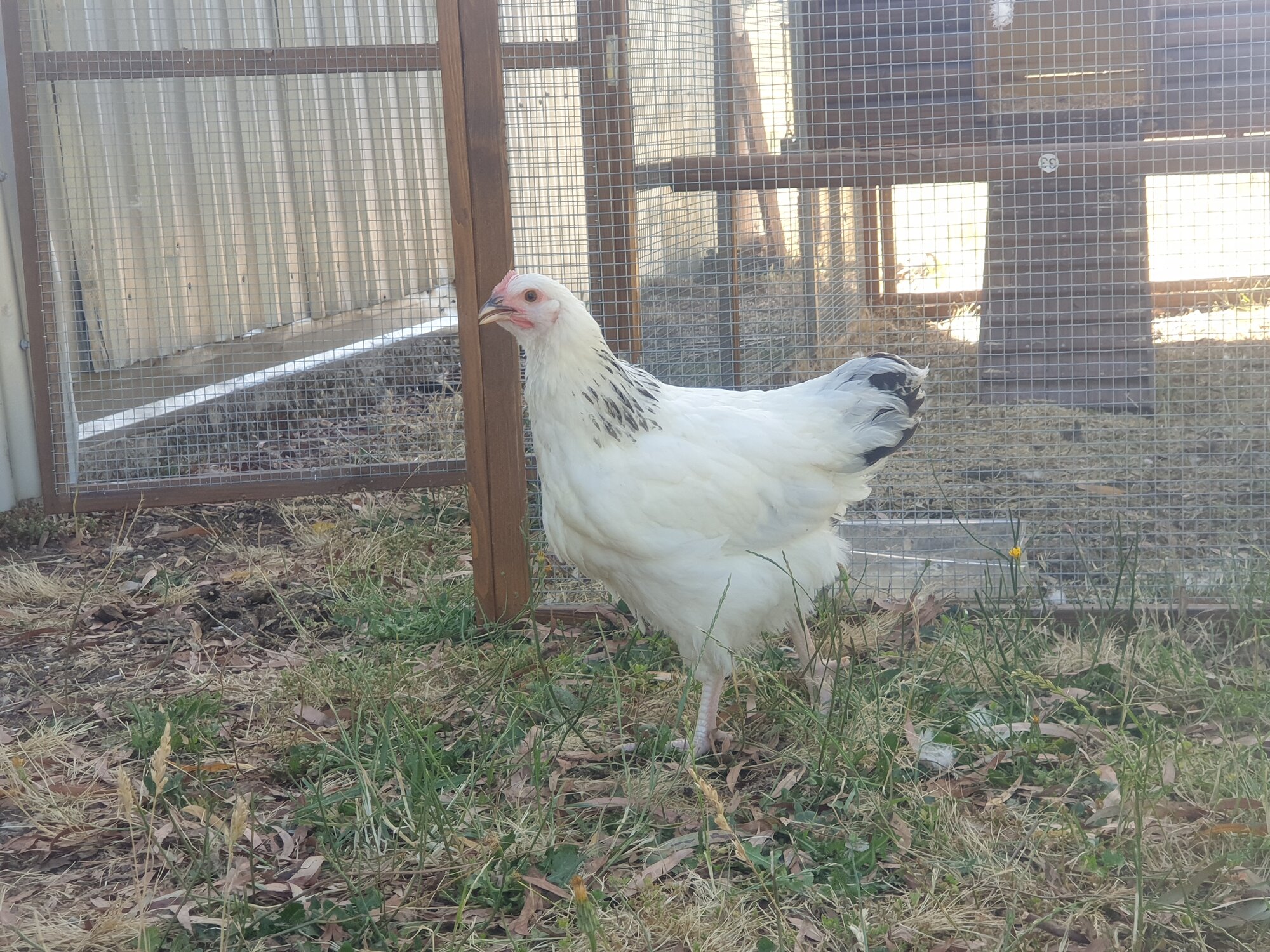 But I think it's big enough to section a bit off and put the little coop in there, or connect it, for the "see but don't touch" method if it goes wrong.

It has some cement planters in there and I was thinking about putting some pallets and roosts in there too so they have places to run too.

Can I put them together during the day?

That's my preferred method since it appears you have time to observe when you do and time to get ready.

I think they are hens. How can you tell for sure they are?

How can you tell they are pullets for sure? When they lay eggs. That's not totally meant to be funny. Sometimes it can be hard to tell for a long time. Sometimes you can see some really definite signs at five weeks, but some take a lot longer.

I'm not 100% sure on them but I think you probably have three boys. It will be interesting to see what others say.