My hen has a pale comb and dark scabby spots--(Avian Pox? Please help!

I have an 8 mo. old Barred Rock who is listless and eating very little. Her comb is very pale, and has 2 dark bumps or spots--I looked at the photo on this site of a chicken's comb with Avian Pox--it might be that...

Our set-up, coop and feeding:
We are new chicken owners. We have 8 hens we raised from chicks. They began laying this summer. They have a wooden coop with deep litter made up of mostly dried leaves. the floor is raised 1 ft from the ground and is metal screen on the bottom, rather than solid wood--that was our idea to help keep it dry. As a result, we can't walk inside the coop--it's small anyway, 4 x 8-- but instead we access the water bucket and feeder by lifting the whole roof. The wall can be removed when it is time to remove all litter--which we have not done yet.) I thought ventilation was adequate, but did notice mosquitos lurking in the shadows yesterday. (Would it be a good idea to rig up a fan? or would this create a harmful draft for the chickens?) The outdoor run--dirt-- is small (5x5, plus they can go UNDER the coop) but usually they get free range of the large back yard for either the whole day or half the day, and they prefer this, of course. (I feel guilty though--they were confined more than usual this week--could that have started this problem in such a short time?) They have laying mash inside the coop and outside we give them some scratch, and quite a lot of kitchen scraps, mostly fruit and veg, but also pasta and bread. (But because of the coop set-up I'm not really sure how much mash they eat. We fill up this huge metal feeder which holds 50 lbs, I think.)

Sequence of events:
One night "Minerva" was not sleeping on the roost w/the others, but on the floor. Next morning she came out of the coop slowly and reluctantly and that was when I noticed that her comb was not bright red like the others, but sickly pink, with the "scabs". She felt light-weight. I put some QuickChick electrolite powder in water, with a mashed garlic clove, for the whole flock, and put some of this water right in front of her, which she drank. That evening, in separate quarters, she pecked at some watermelon and a few pieces of grapes.

The next day (yesterday) I went to our local feed store and described the situation. They said, sounds like mosquitos gave her Pox, and I should treat the whole flock with Tetracyclene as a preventative of reperatory illness (and NOT eat the egss). When I got home I decided to wait on starting the antibiotic until I could search the internet--

--and that's how I found this great web-site. Can anyone advise me what to do? This is our first crisis with our beautiful birds, who have been a joy to us, they are so tame and charming. This morning "Eagle", our Araucuna, appears to have a scab on comb--but no paleness and has normal energy so far. I'm very worried. Minerva ate some more grapes, drinks a sip or two of water. At least she doesn't seem worse. I don't NOTICE that any of them are having difficulty breathing, or are sneezing or anything right now. I have seen them with beaks open on other days, during hot weather.

I will be reading more about chicken care on this site in the next few days and see what improvements we could make in their care, but I feel this is an emergency and I should post this today.

Thanks so much, everybody, for reading.
Aralee in Houston, TX, Sunday, Sept.29

First, if its pox, no antibiotic will do any good. You just need to let it run its course. (ARGH! I'm tired of feedstore personnel pushing useless antibiotics!) If its pox, they'll all have it and you can put mild iodine on the spots to dry them up.
It may not be pox, maybe just peck marks from getting hassled by a higher ranking hen. Perhaps the pale comb is not related at all to the spots. A picture will help us help you. I will usually have several low ranking hens with peck/blood marks on their combs and wattles. And never listen to feedstore personnel.
Last edited: Sep 28, 2008

mine just got pox and here is what the sickest bird looked like when her blisters appeared. She is fine now, pecking, scratching and eating. She is not laying yet. I think she laid about three eggs and got the pox!

Pox is spread by mosquitos normally so if you can somehow control them it would help. I know in your area that would be near impossible right now. The Iodine will help to dry it up and you need to be very vigilent in your cleaning right now as when the scabs come off they are very infectous to the other birds. Take extreme bio-security measures as far as washing after contact with the bird that is infected.

Thank you for the replies! Here is a photo of my hen. The comb does look similar to the others--what do you think?

But it sounds like this is not a fatal disease??? Will I need to separate each bird which gets the dark spots? or is it inevitable that they are all carrying the virus?
Do you think they will all go through the loss of appetite and lethargy?

What do you think of the idea of setting up a fan during hot weather, to keep mosquitos from hovering in the chicken coop?
Thanks for all the help! I'm glad I didn't start giving the antibiotics from the store... 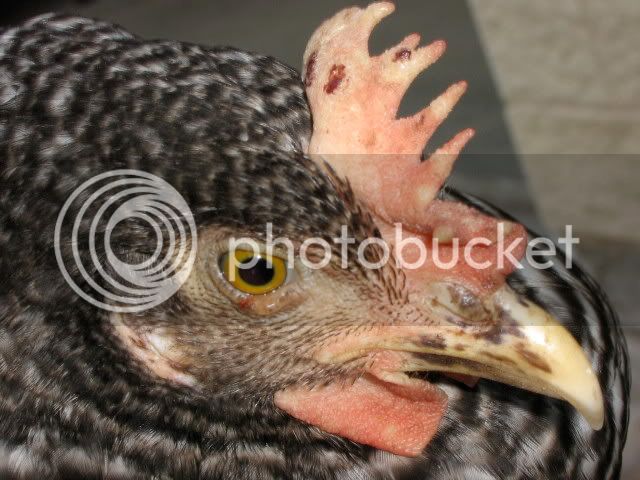 Does the chicken get better by himself. Do you need to give medication. How long does it take to get better?

It's been my experiance that it sometimes takes a week or two to heal up depending on how bad it is. yes the Pox will just run it's course and just use Iodine on the spots to help dry them, no other drugs are needed. The paleness of the comb is of concern though, have you wormed your flock lately or treated for lice/mites? Usually a hen's comb and legs will go lighter when they are laying good but they usually don't get that pale.
As far as being fatal usually it isn't unless the eyes get covered with lesions and the bird can't see to eat and keep hydrated but that usually only happens with wet pox.
Last edited: Sep 29, 2008

I just wanted to share--for other sufferers--that I did the "Google Search" of BYC trick for "Avian Pox" and I found two other threads w/a lot of info on Fowl Pox, with more photos of combs...
There were posts about using the iodine, and also vaccinating against Fowl Pox. I am on my way to get the iodine. I don't know whether I would try any vaccinating at this point...still reading, reading, reading.
My sick one ate some pasta today--I hope that is OK for her and will give her more energy.
Thanks again for all your replies to my problem! I am very happy to have found this great resource.

These are the other Fowl Pox threads:
"Eeekkk.. Help" https://www.backyardchickens.com/forum/viewtopic.php?id=90487

"Is this a comb fungus?" https://www.backyardchickens.com/forum/viewtopic.php?pid=962484

"Help! Hen with scabs forming on her comb" https://www.backyardchickens.com/forum/viewtopic.php?id=72592

The entry on Fowl Pox on the site doesn't have any care tips, just says incurable. Maybe these links could be added there.

Mine don't look like that. They are just tiny black bumps. I am unsure how to upload a pic on to here. Ill look in the help section next. They are not mites. Scabs maybe? Can you eat a chicken with pox? F
Is this fowl pox?

C
Black spots on comb - not sure if it's frostbite.