I think I have a second hen laying eggs. Hen #1 (the SLW, I think) has been laying for about a week now. She consistantly laid in the afternoons until I maliciously cut the grass at her and she waited until the next morning to lay that one. This morning I found an egg that looks nothing like the others she has laid. Well, other than it looks like an egg and all.
What do you think?

The one on the left is this morning's find. It's paler and skinnier. The egg in the middle is the first egg I found last week. The one on the right is the egg I got yesterday from the original layer.

I think that egg layer #1 is a silver laced wyandotte. I think/hope egg layer #2 is a buff orp. Those two seem the most ready. Plus the other possibilites in that coop are a GLW, another buff orp and two EEs.

never mind? did you figure it out? ill tell you what- you arent the only one with the mystery egg problem. i only have 3 girls and just when i think i have figured out who is laying what- i find a different egg under a hen! i think sometimes the colors change a little and then other times i wonder if they are sitting on eachother's eggs to confuse the dumb human.

Citygirl did you figure it out?

I have RIR's. They lay from very pale to brown. 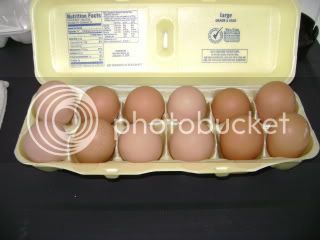 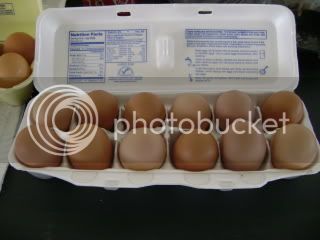 Wow! Look at your variety. You'd think they'd all lay the same color.

I figured it out. It has to be two different chickens as I got two eggs again today, a dark one and a light one. The dark one is definitely larger than the light one. I think it's the wyandotte and the buff orp.

Thanks for the help, y'all!

Just to help you out... a brown egg-laying chicken will not lay the same colored egg everytime -- it always varies.

Well now... that hardly seems sporting in my ongoing quest to figure out who is laying what. Little stinkers.
Thanks for the insight!

Gray Egg - Who Layed It?

Who laid this egg