Nursery in the Run

I have a general question in here that would fall under managing your flock, but my question here I question falls into a sub category to that, which would be getting everyone to know each other within their forever home, so that’s how I ended up in coop and run design. Hope that makes sense, but I’m going to elaborate regardless.

My flock currently has a fenced in yard all to themselves that is roughly 60’x80’. They also currently have a coop that is bursting at the seems and are in need of a bigger one. I think it would work for them if the flock stayed it’s current size, but I have six chicks in the brooder.

I have been working on a new brooder that will be going outside soon, within the current run. So I’d like to set up an fenced in area within the yard for the chicks to start running side by side with the big birds so everyone can maybe be friends, and maybe by the time the new and improved coop is ready they can all move in it together.

My question, and somewhat of a request, is how many folks have setups like I’m wanting to do? How secure from the other chickens should this be? And do you have any pictures of something cool, as maybe I’ll make it something permanate it ever I need to sequester chickens from the flock in the future.

Our run is 16x12. I sectioned off a corner with wire, about 4x8, inside the run as a grow-out area for 4 chicks last fall. It worked beautifully. Everyone was able to mingle, but the babies were out of reach of the adults. I started integrating them at about 12 weeks with the only issue being find roosting spots at bedtime. I currently have it sectioned off again for a broody that's due to hatch early next week.

I do the same thing when moving my new babies outside. I brood them indoors until they don't need supplemental heat and then I move them out. When I rebuilt my coop several years ago I planned for this and I have two sections of open run with a gate between them. When there are no new babies everyone has run of everything, the gate is left open. When there are newbies the gate is closed and they are separated by fence. I use a large (humongous) dog crate for a temporary coop for them until they are fully integrated into the big coop, which goes in my covered, enclosed run, so they are predator proof at night. I put up a temporary fence to separate that inside the run until they are integrated. I also run bird netting over my open nursery run to protect them from hawks during the day, and inside the closed run to prevent fly-overs of the fence by the babies or determined adults. I usually integrate as slow as necessary so no one gets hurt, starting with short periods with supervision to start with. For me, I don't rush, it takes as long as it takes. It needs to be as secure from predators as you can make it, and secure enough to keep them in and the adult birds out. My adult birds always seem to think that whatever I'm feeding the newbies must be WAY better than what they have, and are determined to get at it. You never know how it's going to go. I had a young cockerel fly over into the adult pen once and get pretty badly pecked by the adult hens, so I really try to make sure they can't do that.

I designed for a separate area created with a temporary wire wall to introduce chicks, or isolate a sick or 'bad' bird, or like right now a broody hen.

This is how I brood and integrate incubator hatched and/or purchased chicks:
https://www.backyardchickens.com/articles/integrating-new-birds-at-4-weeks-old.72603/

I’ve currently, being pretty busy, built a small little enclosure on one side of the chicken run and been putting the chicks out maybe an hour at a time. The weather though, is getting really nice and the bugs are out ready for the taking. I’ve built a small “coop” for outside for the chicks and am about to set it up in the run. My run is about 80x60, so there’s a lot of room for another run within the run, which I’ll be getting on soon, and look forward to trying to post some pictures. Before I know it, there’ll be a new flock.

So currently, as I said last, I have just been so busy. I have cobbled together a couple old gates I've had laying around and strapped them up along the big chickens run. The little birds have been going out in this a couple hours at a time so everyone can start getting use to each other. My neighbor offered me an old dog pen, so this weekend I’m gonna set up a run inside the current run, and more then likely, move the little birds on out full swing, as they are mostly fully feathered. Hopefully, after a couple weeks or a month and there’s a better size ratio, we can remove the run and everyone can share the big one. Here’s a not so good picture of the current daycare I’ve set up, I’ll have to post a better picture after the weekend once I’ve done the new setup. It’s truly amazing though, how the pecking order is already happening, even with a fence between them. 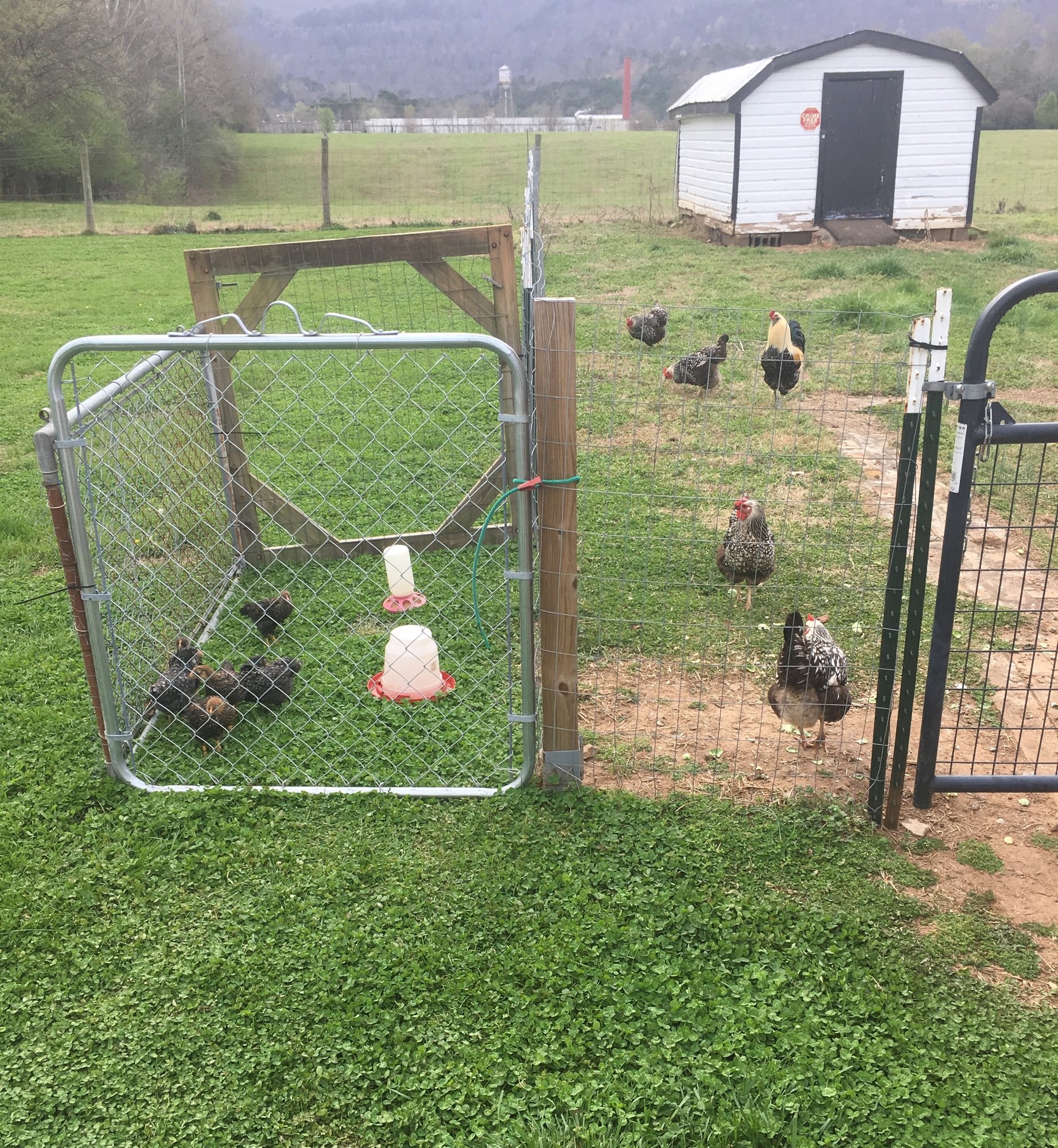 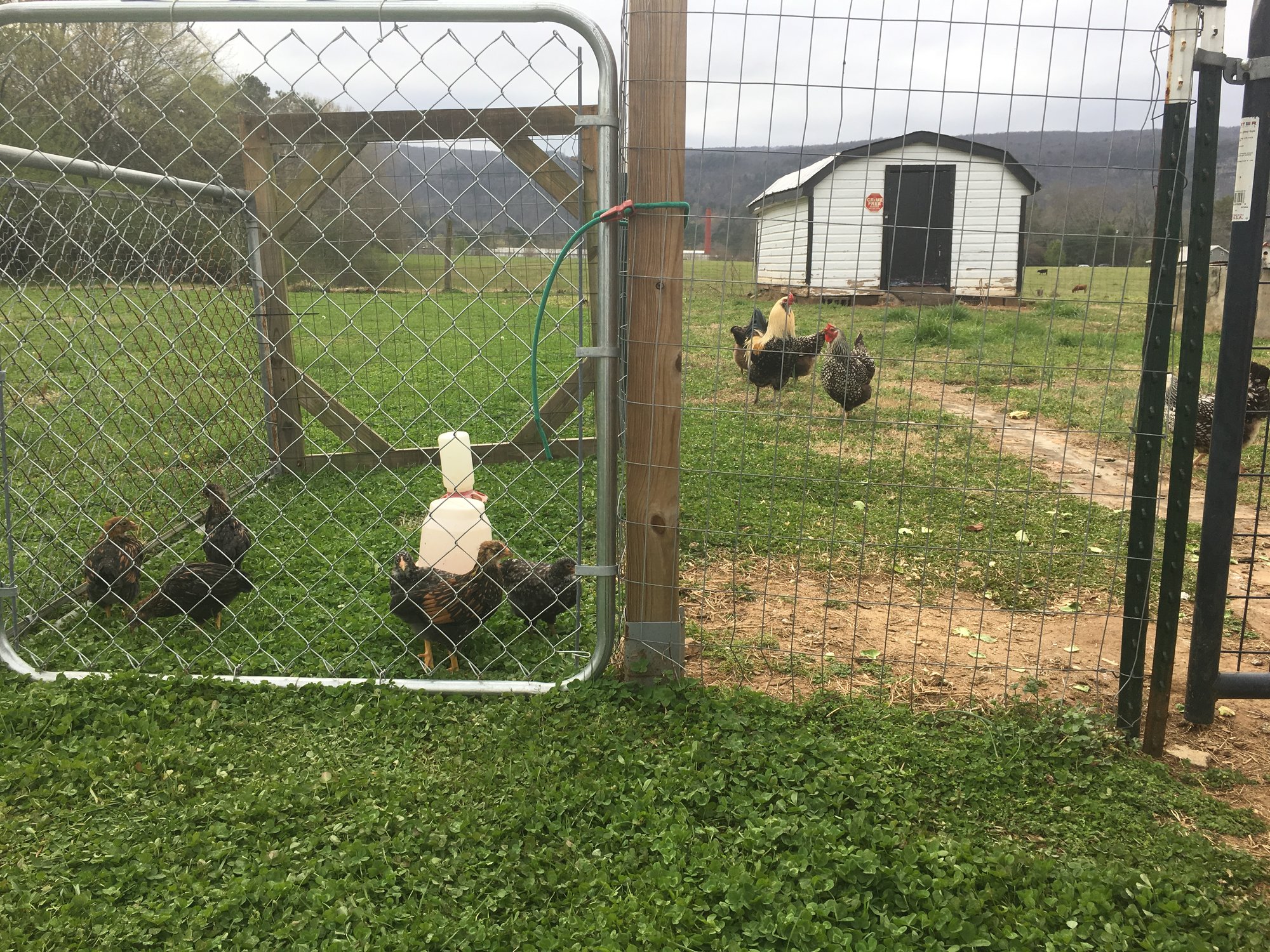 When you set up the dog pen inside the run, raise the edges by placing bricks or wood blocks under the corners. Raise it just high enough so the chicks can scurry underneath for protection if the big ones get after them. It should be too low for the adults to get in.
If you haven’t already viewed the article @aart mentioned, it can give you a better idea of what I’m describing.

Dmontgomery said:
When you set up the dog pen inside the run, raise the edges by placing bricks or wood blocks under the corners. Raise it just high enough so the chicks can scurry underneath for protection if the big ones get after them. It should be too low for the adults to get in.
If you haven’t already viewed the article @aart mentioned, it can give you a better idea of what I’m describing.
Click to expand...

This is a good technique and have seen it used successfully several times. The bedding depth in my coop made raising the wall a certain height inefficient, so I went with the 'tiny door's instead.

With the weekend to myself and a beautiful day, I cleaned out the old “storage shed” that’s been full since I bought my house, got it mostly turned into a new coop for our growing flock and finally, officially, have the chicks for their first night out of the garage.

The big birds are still using their little coop, as that’s a whole another chore to get them transitioned. But, the little birds are sleeping outside tonight, after most of the day in their own little yard, tied into their own little section of the new to us coop.

The new coop is about 10’x16’, and I’ve been eyeing it for a very long time, as it’s been sitting full of the previous owners crap inside the pen for over two years now. I put some temporary fence inside, about 6’ from the back wall to sequester the chicks from the big birds. They have their own little door that leads them out to about a 8’x16’ little run on the side of the coop. So the older ladies can now see the chicks 24/7, from within the coop and on all sides of the little run.

My wife has takin on the task of putting the chicks out everyday into their pen that’s been next to the big run, and I’ve been loading everyone up every night to the security of the garage. But now, that’s all behind us.

I have some finishing touches on just about every aspect of the coop, but here are some pictures of where I’m at...which is progress.