observances while integrating chickens into a flock.

when I tried taking the smaller girls outside with the bigger chickens the little girls was picked on
and one was injured(recovered now) so i took them back inside. each day I would take them out
and one of the older ones seemed to get more and more violent even to the older chicken
when the little girls was out there. 2 days later the older violent hen was attacking the other older hen
and when she was running away and flapping her wings, she got her toenail stuck in her neck
and ripped a huge hole in her neck before i could get over to help her. so i brought her inside with the little girls.

they started to squak and was not happy she was inside. I showed them that she was injured and proceeded to
use a nylon suture kit to sew her up because you could see inside her neck. after i got her cleaned up and sewed up, i put her down
the little girls ran up to her and started bullying her. so i picked up the little one that was pecking her and put her in her old
baby brooder(very small 3x3x4ft) and they calmed down. after 5 hours i let her out and she was nice to the older chicken, even helped her
clean herself. and became friends with her.

Now the little one started picking on the other little one, i guess mad at her for not hanging out with the older one lol.
I noticed a pattern evolving.

i brought the 4th chicken in and hey reverted back to the older ones doing the picking
and the younger ones hiding. as soon as i took away the 4th chicken the 3 became friends again.
this tells me either i'm crazy or my 4th chicken is telling the other older hen to be bad.
and making her mean. If i put the one that is currently alone outside in with the little
girls shes really violent.


So what I gather is that the older violent chicken is making the other older chicken aggressive.
and the little girls get violent when there is a third chicken. they all hate eachother if you put them together in a small area(box)

older hen is middle in the pecking order, they been inside 5 days now together and doing great,

So today I will bring the 4th chicken back inside to see if they accept her or if they revert back again.
I'm hoping this will not be a repeating pattern or I will have to rehome the offending chicken.

wish me luck as i take this experiment to the next level!

once my experiment is done I will share the complete data on what I find out.


Here is my first chart of who is friends and who is not. 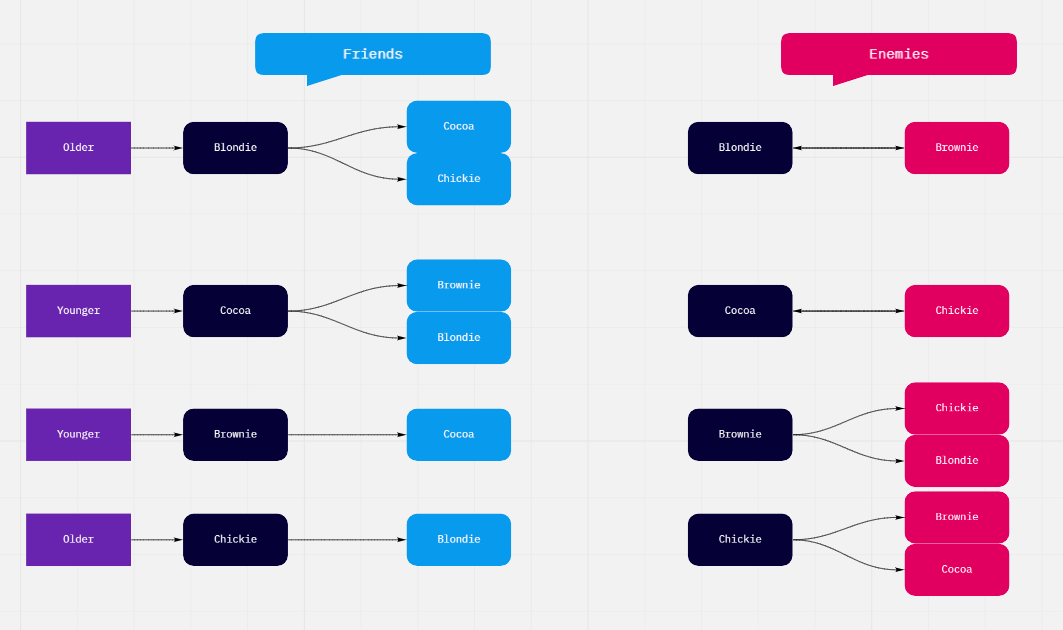 frostic said:
I have 4 chickens 2 older and 2 younger ones, the older ones are 3 months older than the little girls.
Click to expand...

So how old are the younger ones?

Here's some tips about....
Integration Basics:

It's all about territory and resources(space/food/water).
Existing birds will almost always attack new ones to defend their resources.
Understanding chicken behaviors is essential to integrating new birds into your flock.

Confine new birds within sight but physically segregated from older/existing birds for several weeks, so they can see and get used to each other but not physically interact.

In adjacent runs, spread scratch grains along the dividing mesh, best if mesh is just big enough for birds to stick their head thru, so they get used to eating together.

The more space, the better. Birds will peck to establish dominance, the pecked bird needs space to get away. As long as there's no copious blood drawn and/or new bird is not trapped/pinned down and beaten unmercilessly, let them work it out. Every time you interfere or remove new birds, they'll have to start the pecking order thing all over again.

Multiple feed/water stations. Dominance issues are most often carried out over sustenance, more stations lessens the frequency of that issue.

Places for the new birds to hide 'out of line of sight'(but not a dead end trap) and/or up and away from any bully birds. Roosts, pallets or boards leaned up against walls or up on concrete blocks, old chairs tables, branches, logs, stumps out in the run can really help. Lots of diversion and places to 'hide' instead of bare wide open run.
Good ideas for hiding places:
https://www.backyardchickens.com/threads/a-cluttered-run.1323792/

I’m with you, chickens are fascinating. What interesting observations. About how many hours do you think you’ve got invested in this project so far? What a great way to spend you time. And handy that you knew how to patch up your injured girl!

aart said:
So how old are the younger ones?
Click to expand...

6 months and 3 months.
yes I know this information @aart
the issue was i had 3 chickens and one dies, i didn't want to have 2. need atleast 3 so they don't get depressed. well my feed store will only sell 3 chickens at a time. so i got 3 more and one of them died as well
leaving me with 2: 6 month old chicks and 2: 3 month old chicks.
now i have to integrate them but the method you speak of did NOT work because the bigger one got hurt through the fence very badly and i had to sew her up. this is the only way i can do it is to be present the entire time to break up fights as they happen.

so today the 6th day into my experiment
I brought in the 4th chicken chickie.. She is not liked by anyone now.
So i presume chickens have a 6 day memory on who is their friends.
blondie started attacking chickie as soon as i sat her down. and then cocoa and brownie started attacking her too. brownie and chickie are no longer friends.
and blondie and chickie are now enemies too.

so now they are seperated because after taking blondie and chickie out
of the room brownie and cocoa started fighting and had to be seperated. so i brought back in blondie and they all stopped fighting.

all are in seperate brooders atm due to the high volume of fighting going on.

I'll have an update tomorrow or in a few days. need to get them all to be nice
to be able to put them in the coop together.
Last edited: Oct 31, 2020

I have used @aart's method for integrating flocks on more than one occasion and have had excellent results with it, with NO violence, NO bullying, no trauma, no drama, no injuries. This past spring we got approximately 16 baby Black Australorps , both pullets and cockerels, and integrated them into an established flock of approximately 15 Easter Eggers. The "brooder" is adjacent to the big birds' run, and from about 3 weeks to 6 weeks all the birds shared a chain-link fence. One day we just opened a gate between them and as far as I could tell, the birds never noticed there was no barrier between them, they just mingled naturally and peacefully together as if they had always done so.

BigBlueHen53 said:
I have used @aart's method for integrating flocks on more than one occasion and have had excellent results with it, with NO violence, NO bullying, no trauma, no drama, no injuries. This past spring we got approximately 16 baby Black Australorps , both pullets and cockerels, and integrated them into an established flock of approximately 15 Easter Eggers. The "brooder" is adjacent to the big birds' run, and from about 3 weeks to 6 weeks all the birds shared a chain-link fence. One day we just opened a gate between them and as far as I could tell, the birds never noticed there was no barrier between them, they just mingled naturally and peacefully together as if they had always done so.
Click to expand...

i had them like that for almost 4 weeks, when i went out they was fighting the day i let them "mingle" that is when chickie attacked the baby and blondie hurt herself running away lol

the issue is that they all hate eachother. i should have got 7 chickens to start out with not 3 because this is an impossible feat atm getting them to be nice at all.

ok so some interesting information:

if cocoa and blondie are alone they get along. but if i bring in brownie
cocoa will start attacking blondie.

if i put chickie and brownie alone they don't fight.

it seems that the dynamic changes depending on who is together.

if blondie and chickie are together they are the attackers.

if i put all 4 all hell breaks loose and they all fight each other.

so for the next few days I'm going to keep them all in separate brooders yes they can interact but not enough to hurt each other. and try the experiment again. What I'm hoping to learn is
why do chickens react differently depending on what chickens are around them.

why are 2 chickens friends when they are alone then enemies depending on which chicken is with them.

like brownie and blondie are friends when chickie is around but enemies when cocoa is around?

it makes no sense. but I will crack it and figure it all out over this next week or they all going to become dinner and I go get all new ones LOL

this chart will explain better than i can. 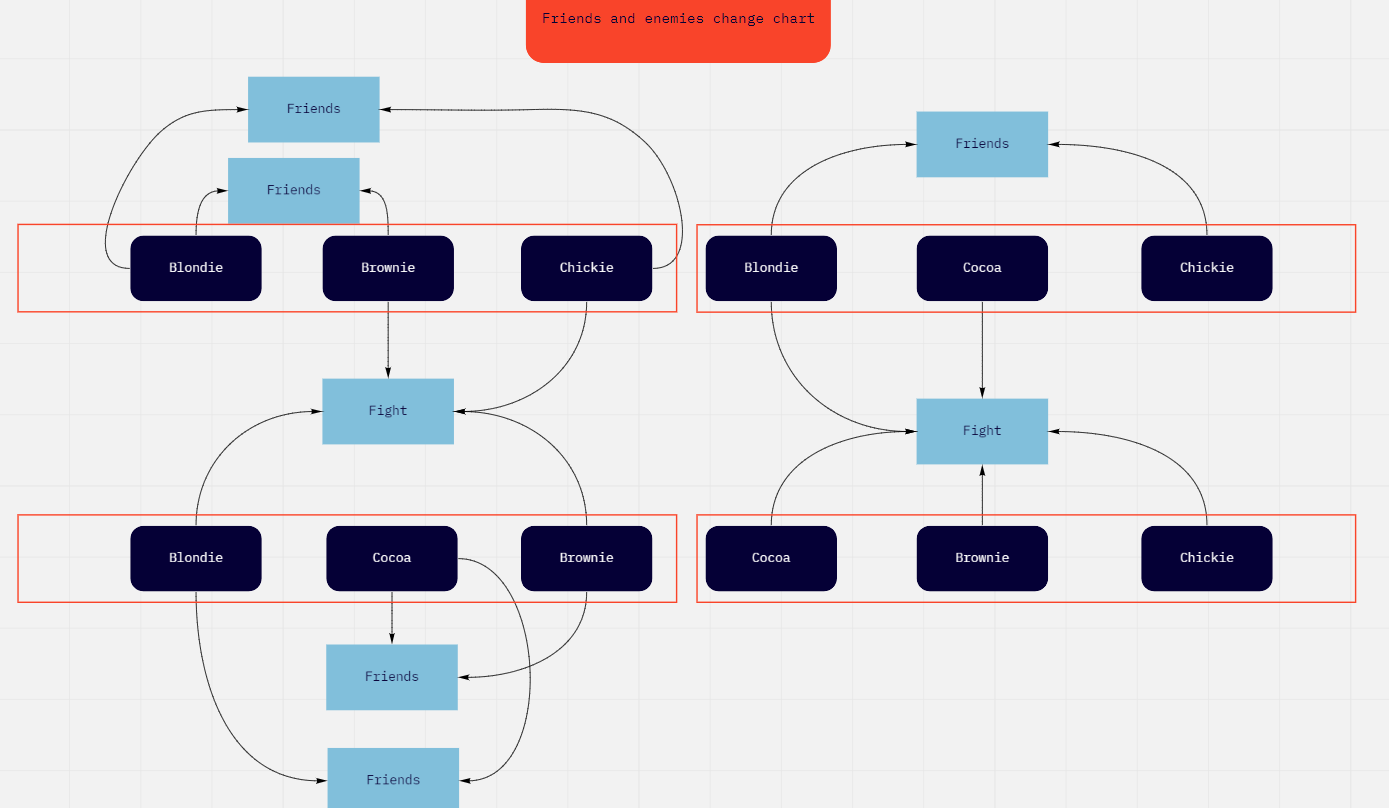 after 3 days with them all separated I will test again who fights with who and add a new reply with the updated data for comparison.
Last edited: Nov 1, 2020