Odd behavior by a young hen.....can anyone help?

This bird is not yet fully mature, though she doesn't lack much. She has free range of one area of the backyard and normally sleeps in a covered box about waist high. Yesterday was rainy and cool and I noticed that when I went to check on her, she'd not left her box, which is the first time I've seen that.

Anyway, I put her on the ground and tossed a bit of her favorite, cooked rice, for her to have something tasty to start her day. She pecked at it repeatedly, but her beak never reached the rice. She then walked over to an area that had some ant activity, and same result.....pecking but not ever actually striking the ground. I later spoon-fed some soft bread and she managed to swallow some of that. She's walking around grazing, pecking at plants etc, but usually not making contact.

I've never seen such a thing. Any ideas? My wife thought maybe something had happened to her eyesight. I'm wondering about some vitamin deficiency.

I have a hen who has been like that from the start.
You need to look her over real good front to back. Top to bottom right down to the skin.
Chickens are masters of disguise. It’s in their DNA as part of survival. They ACT like their grazing,eating they try to not show any weakness. If she were mine I’d do an exam. Subtle cues are easy to miss so good for you picking up on her behaviors. Let us know what you find.
Also if you separate her you’ll be able to monitor her in take of food and water and her stools.

I've had to separate her from the others pretty much from the beginning because the bigger hens dominate and abuse her. Though there's plenty of room in the pens for her to run away (the smaller birds have no problem escaping more aggressive larger ones), when she's attacked, she just collapses. The other birds will then come over and take turns continuing the abuse. Our largest rooster once jumped on her, left her injured lying on the ground, and then came back and tossed her in the air. Not the first time he was overly aggressive with a smaller bird. He soon was the main feature in a very delicious gumbo.

This little bird is so docile. She's become almost like a puppy, following me around as I work in my garden, and even flying up into my arms when I enter the area.

On top of everything else, last night we almost lost her. We were without power and I was about to lock up the house when I decided to walk out back and check on the gates to make sure the dogs couldn't enter that area. Just as I was getting to the gate, I heard her screaming for her life. A young possum had chased her out of box and had her by the tail on the ground. I managed to separate them but he went right back after her as though I wasn't even there. The second time I separated them he met his maker via a metal pipe that was within easy reach.

I couldn't see any wounds that went into her body cavity, the deepest being around her uropygial gland. The skin on her posterior was also torn open and she was bleeding a bit. We immediatly gave her antibiotics and I put some antibiotic cream on her wounds. Had I closed up the house, or been 10 seconds slower arriving, she'd have been dead or mortally wounded.

Happy to report that this morning she's alive and well, Her wounds are dry and she was hungry. A hungry bird is usually a healthy bird in my limited experience. I placed her on a concrete slab and gave her some spaguetti to see if she would have the same problem as yesterday. Today she's actually picking it up with her beak and eating well.

Hopefully she'll soon be back to normal. I'd still like to know what caused that odd behavior. Thanks for your comments.
https://en.wikipedia.org/wiki/Uropygial_gland

Ah, almost forgot. Watching her yesterday, her stools were much looser than normal. I also noted during the process that she's got a tape worm. They're very common here in wild birds so it's no surprise our chickens might have them as well. They're normally not life-threatening, but I'll still try to find something to rid her (and likely the others) of the problem.

Well ...they pick on her for a reason. A wound is a good enough reason for the flock to gang up. Chickens do that they get fixated especially if there’s any blood involved.
Your situation is different than my hen. Mine is lowest in the pecking order but nothing like what you are experiencing.
And yes I’d go ahead and worm your birds.
Honestly it sounds to me that your flock will kill this hen. There’s something about her that triggers others. Chickens can be brutal a very ugly fact.
I wish I had some kind of answer. I just don’t.
Perhaps rehome her. You say she’s sweet. If your honest with people someone surly would take her. I would if I could. Some one with a small “pet” flock would be perfect. Sorry I’m not much help. Perhaps someone else will answer your thread and have answers for you. Best wishes

Thanks MissChick. You're always very helpful.

And you're right. I reached the conclusion that if I continued to put her with the big birds, she'd get killed or mortally injured. While I'm out there I can keep an eye on her, but to leave her 24 hours a day would be too big a risk.

I've got plenty of room here so space isn't really a problem. The only problem is that she's in an area where the dogs can more easily enter when I don't want them to and, being dogs, she might get killed. The main area for the rest of my birds is much more secure. I'm willing to take the risk of having her where she is though because I enjoy her company so much. She's smallish, black, and has something that looks like a hat of feathers sitting on top of her head. Quite stylish actually. Not sure the breed.

AgroUrica said:
Anyway, I put her on the ground and tossed a bit of her favorite, cooked rice, for her to have something tasty to start her day. She pecked at it repeatedly, but her beak never reached the rice.
Click to expand...

Sounds like she can't see well.
Do you feed a regular chicken ration in a feeder that she can successfully eat from?
It could be a lack of nutrients.

Where in this world are you located?
Climate is almost always a factor.
Please add your general geographical location to your profile.
It's easy to do, then it's always there! 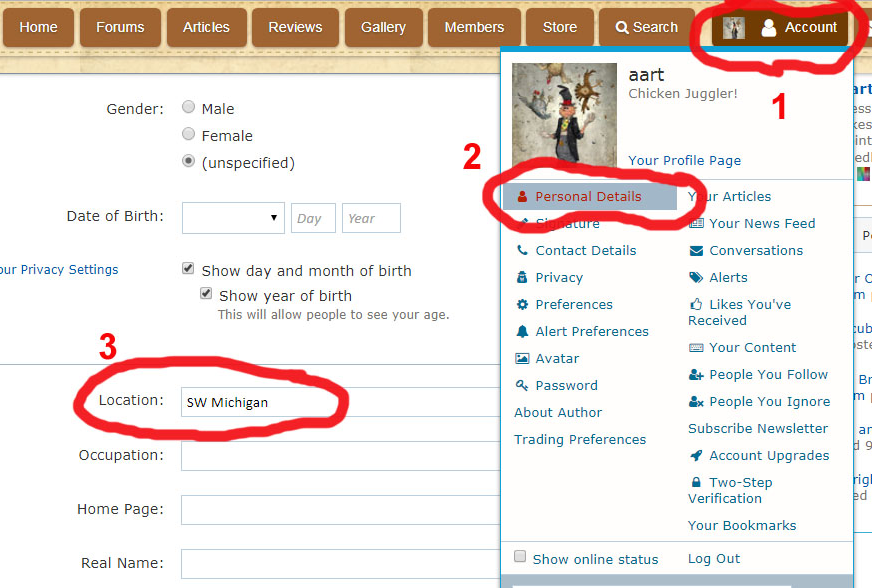