Ended Official BYC Mini Contest - "WHAT IS YOUR HOBBY?"

Official BYC Contest
"WHAT IS YOUR HOBBY?"
This contest is brought to you by our BYC Sponsors
(click to view & support them)

This is a RANDOM Winner Contest...
Post up to 3 of your Hobbies and your name will be entered up to 3 times for the final drawing for a chance to win 1 of 5 (that's right, FIVE)
2019 BYC Calendars! ​

​
The rules are simple:​
All entries must be submitted as replies to this thread,

Only 3 Hobby Entries per member, PLEASE NUMBER YOUR ENTRIES!
Please add a short description with your IMAGES IN YOUR POSTS, examples....​
These are just examples of how to create your post, you don´t have to talk about all of them and you can add other things you want, those are just a few guidelines in case you don´t know how to make your post!

SO ENTER UP TO 3 HOBBIES
for a chance to win 1 of 5 (that's right, FIVE)
2019 BYC Calendars!
We will use a random number generator to select our winners for this Contest.​
Prizes:
FIVE winning members will be awarded a
beautiful 2019 BYC Chicken Calendar!​ 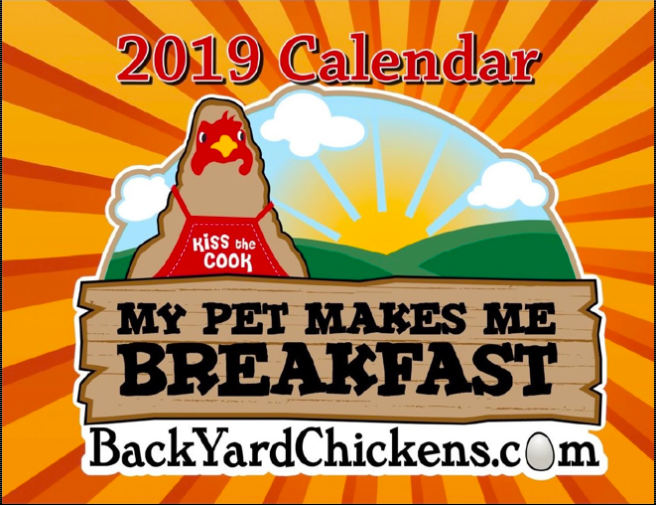 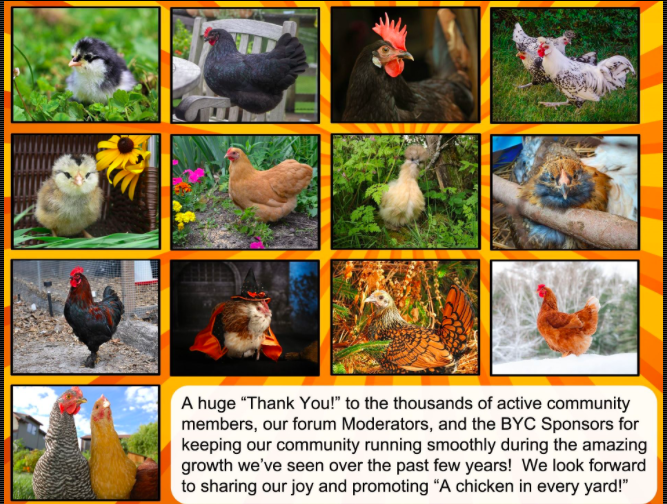 We will be accepting entries until Friday the 30th of November

If you would like a calendar, without entering the contest, please see how to purchase one HERE

We all know chicken math right? Yep, been there done that, well I moved on to goat math, that’s right my love for Nigerian dwarf goats and their milk drove my math skills up to an advanced class!
I enjoy my goats so much, they are almost like dogs, but less work.

I began milking after our first stressful kidding, everything went well it was the newbie thing and I stressed myself out with the unknown! It wasn’t long after I fell in love with these little kids as well as the goat milk.

I had way too much milk, I was giving it away and even to people to feed to their meat chickens to help fatten them up quicker! I learned how to make wonderful chocolate pudding pies, cajeta a fantastic mexian carmel, fudge is always amazing, yogurt is delish too! I made a few cheeses and that really started to use the milk quickly, and just as quick I realized I am no cheesemaker! Just wasn’t for me, so I thought,“well I can try soap”. And I did!

Goat Milk soap is amazing soap! I had never used goat milk soap before and it was such a difference I couldn’t believe it! So I started to research and take notes. We all know how I can take some notes!  Anyway, I bought book after book, whodathunk I would learn chemistry in the process! I educated myself on healthy skin and on and on….

I started to get addicted to making soap so I gave a few bars away and quickly they had asked for more and more, and then their friends and family wanted to try it as well, and that’s how and why I started Lil Swatara Soap LLC. It is now a business and with the holidays quickly coming up I am putting way too many hours into making and packing soap but it is quickly paying off!

In fact, I am going to GIVE AWAY 8 BARS OF my Goat milk SOAP! That’s right, we will draw an extra 8 numbers after the calendars and I will send out soap to each of those 8 winning number draws!

My only hobby besides my chickens is PHOTOGRAPHY. I am always taking pics, every chance I get. My best work is with sunsets, animals, landscapes, NATURE !!! I don't get paid to do it, but I do enter photography contest on line. I've even had one published in a photography book. Here are a few samples. The first one is the published one. 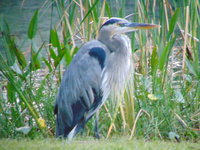 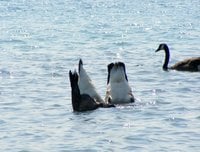 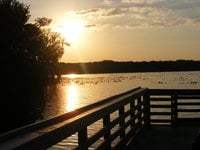 My hobby is bird taxidermy. I started 2 1/2 years ago. I absolutely love it! It is so much fun recreating the little looks and expressions of the birds. My favorite part is the habitat work on the bases. I use just a plain walnut oval base and make it into a living scene for the bird. I order some of the habit material like fake plants but love to collect the moss, lichen, driftwood, and wood. Between all that, I cast my own bird heads, make the necks, paint the beaks, and paint the feet. I only order the eyes and body.
Here are some pics of the birds I have done. 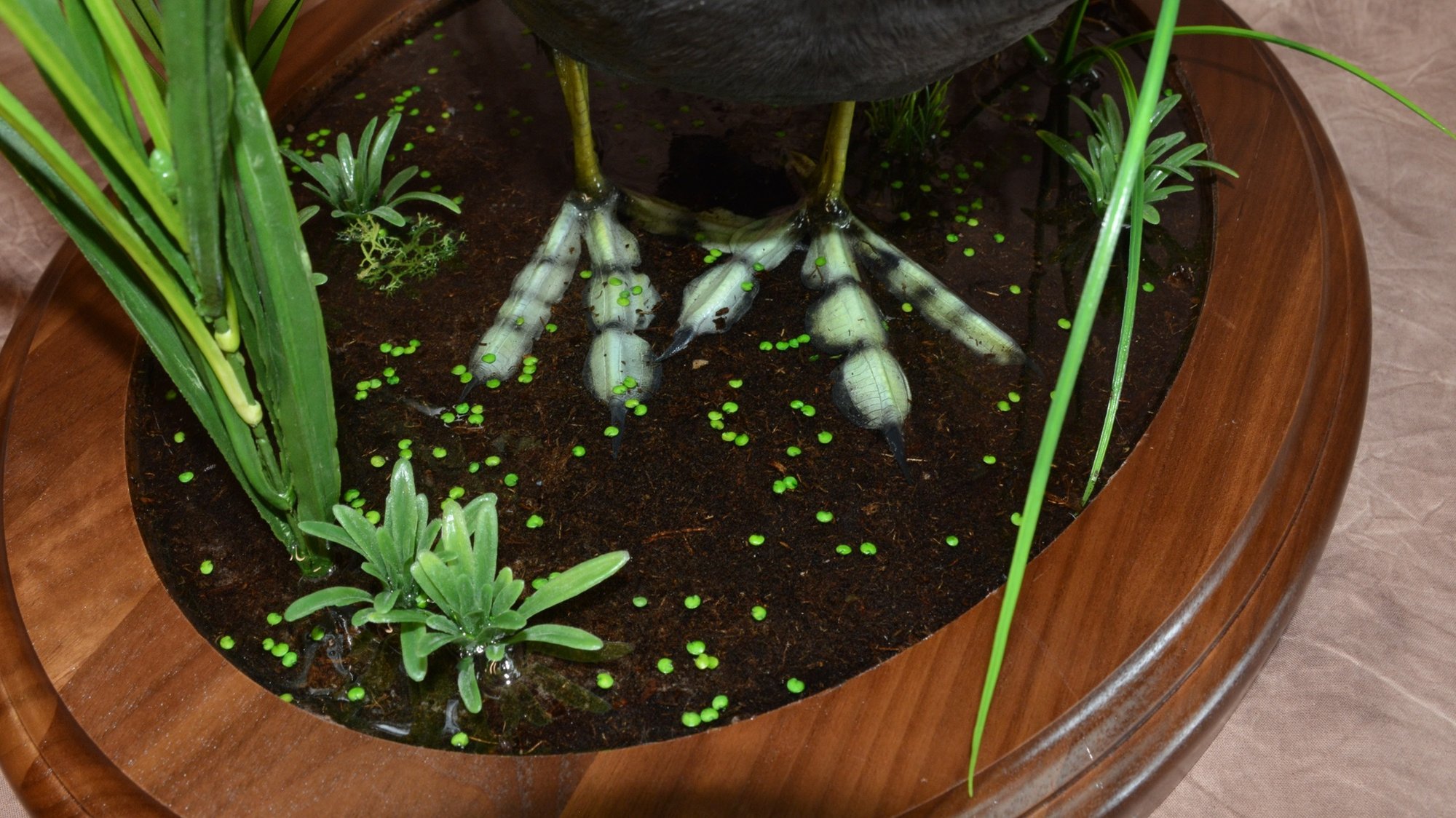 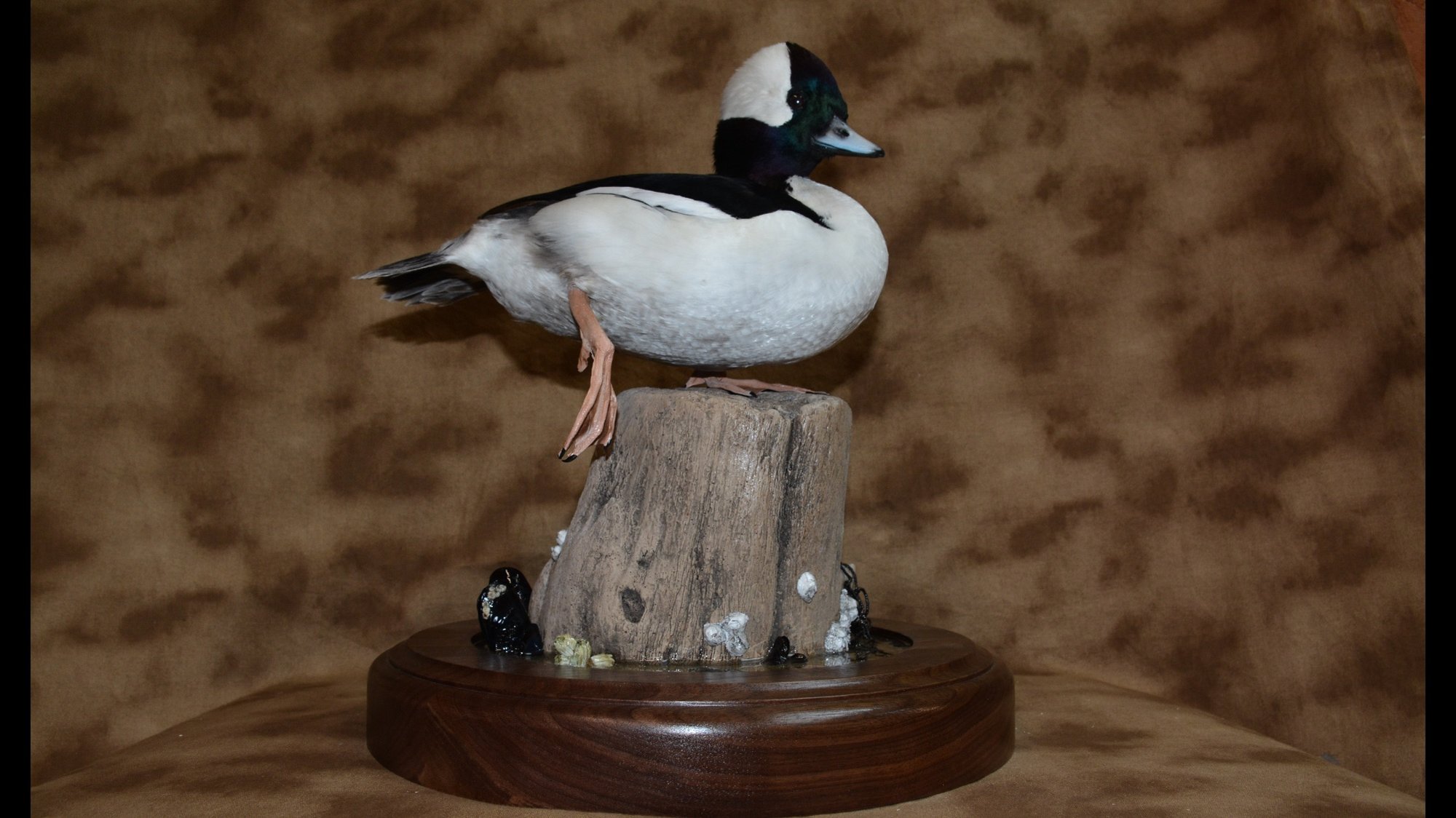 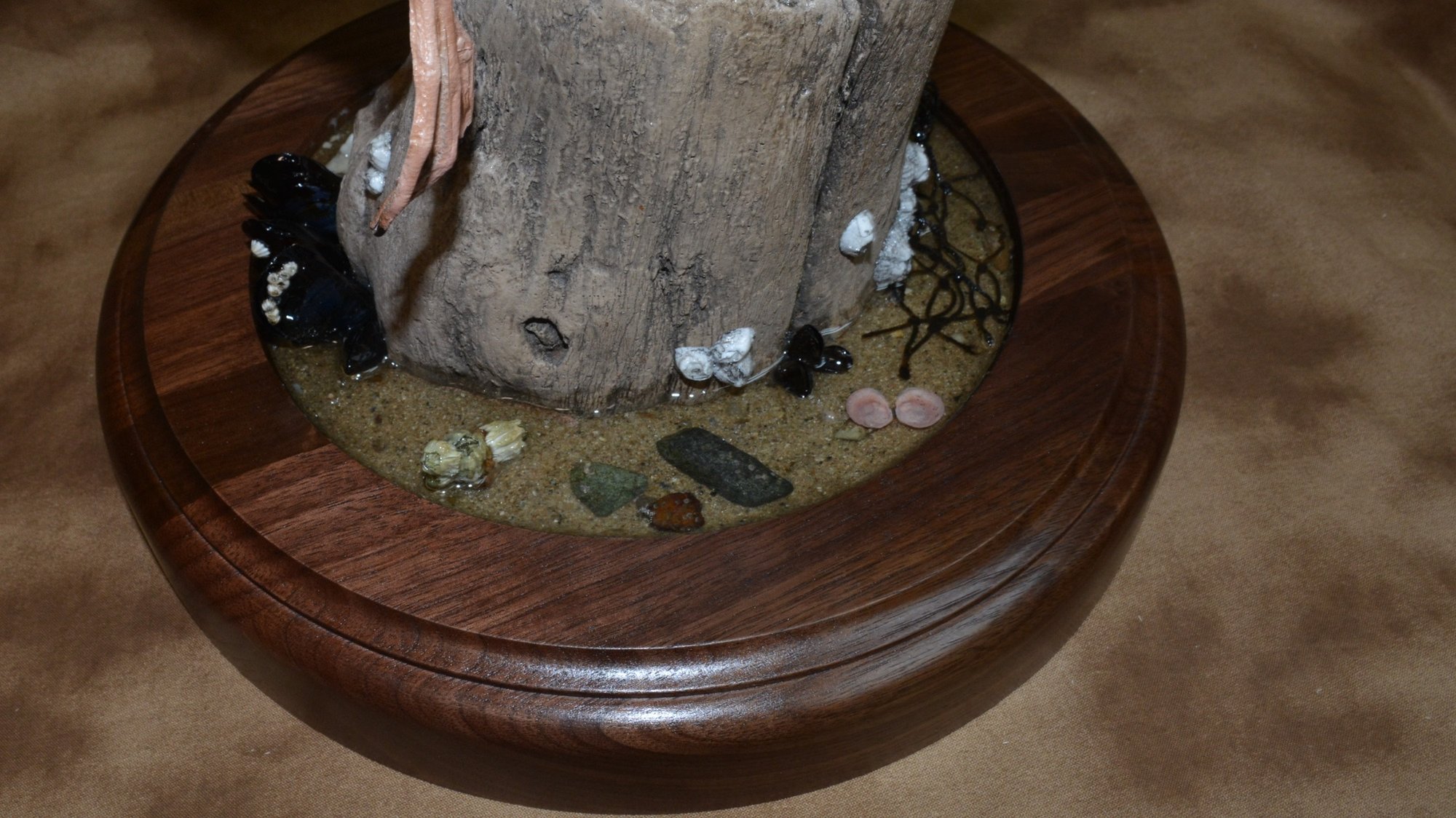 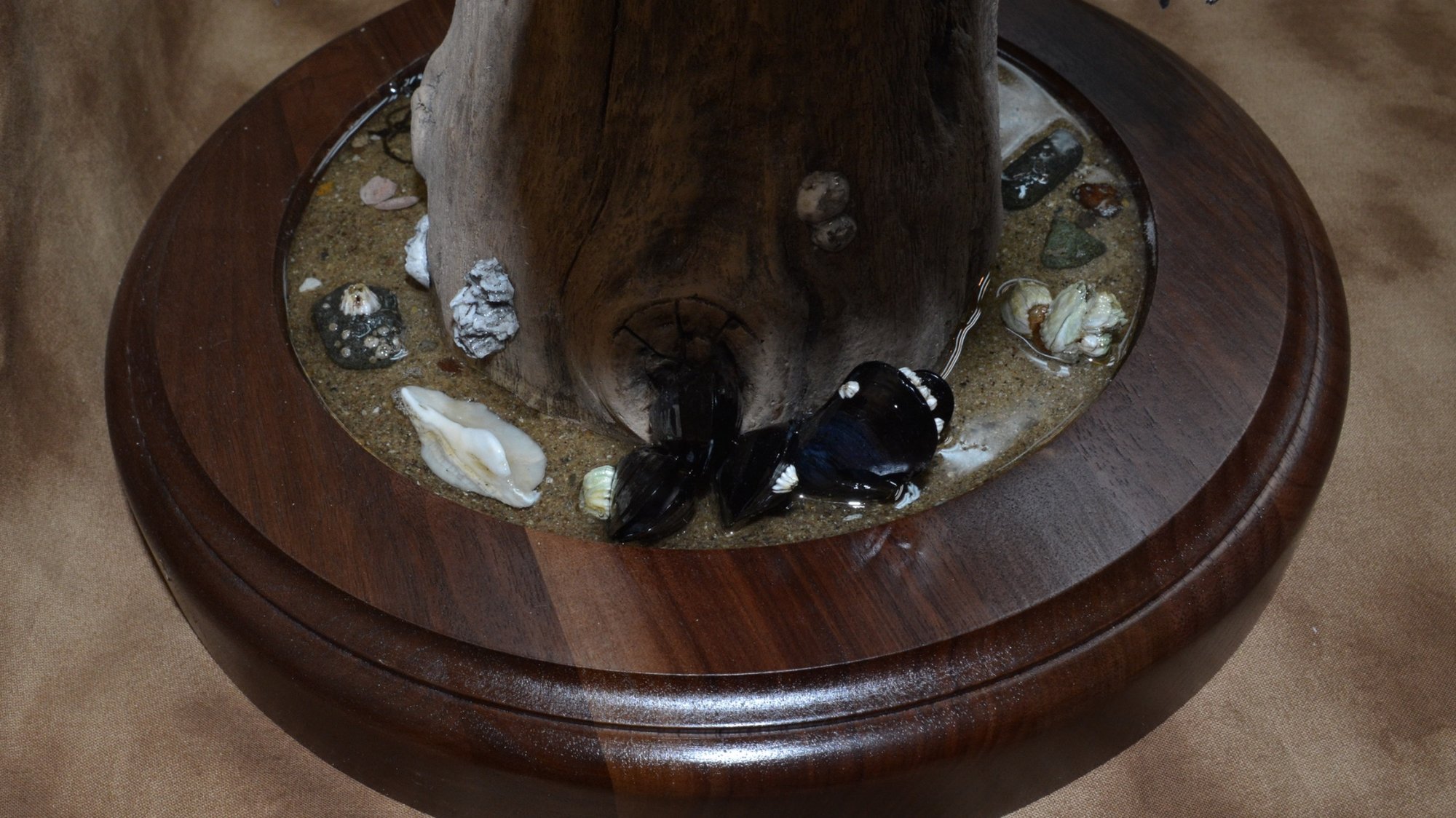 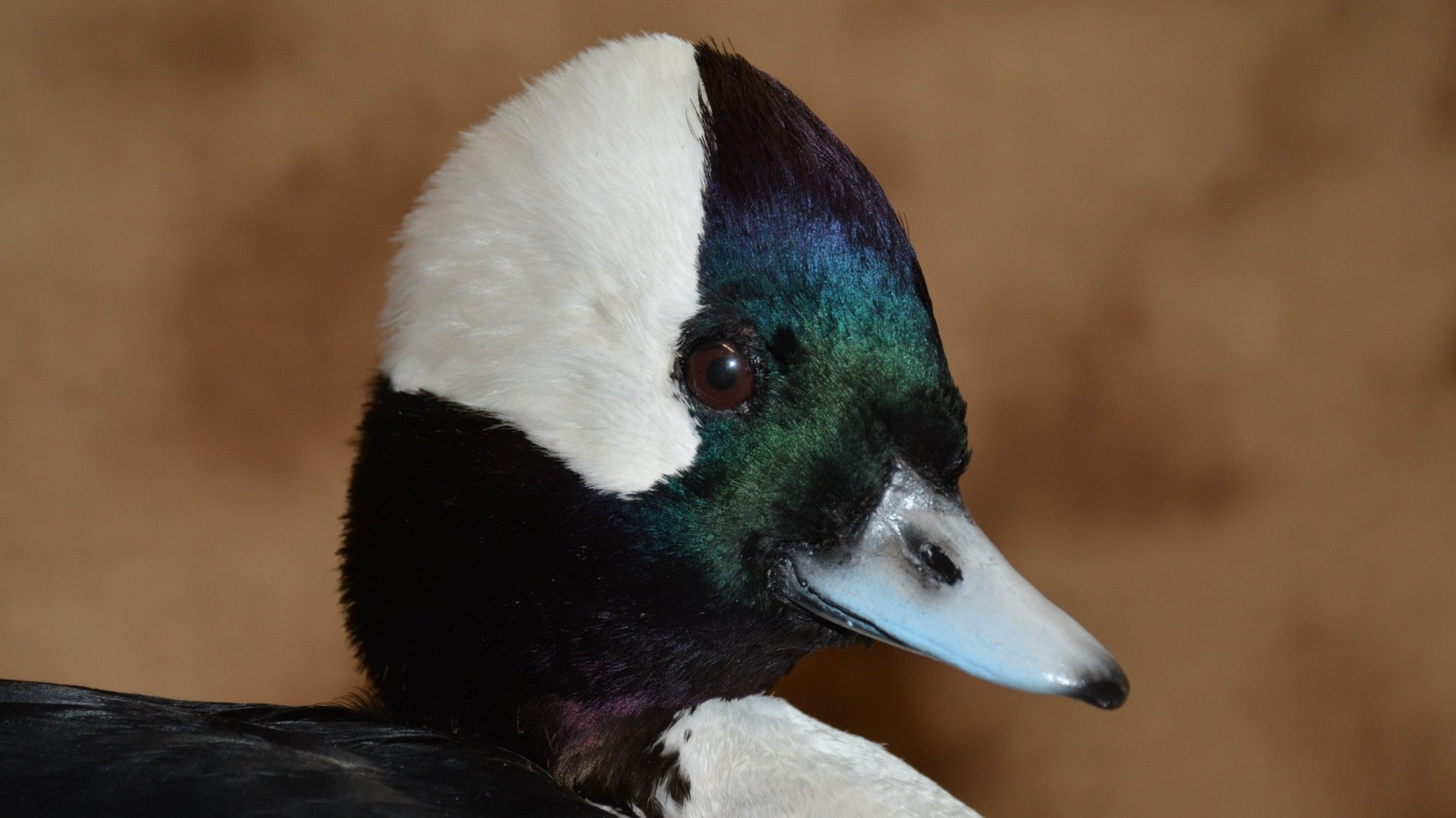 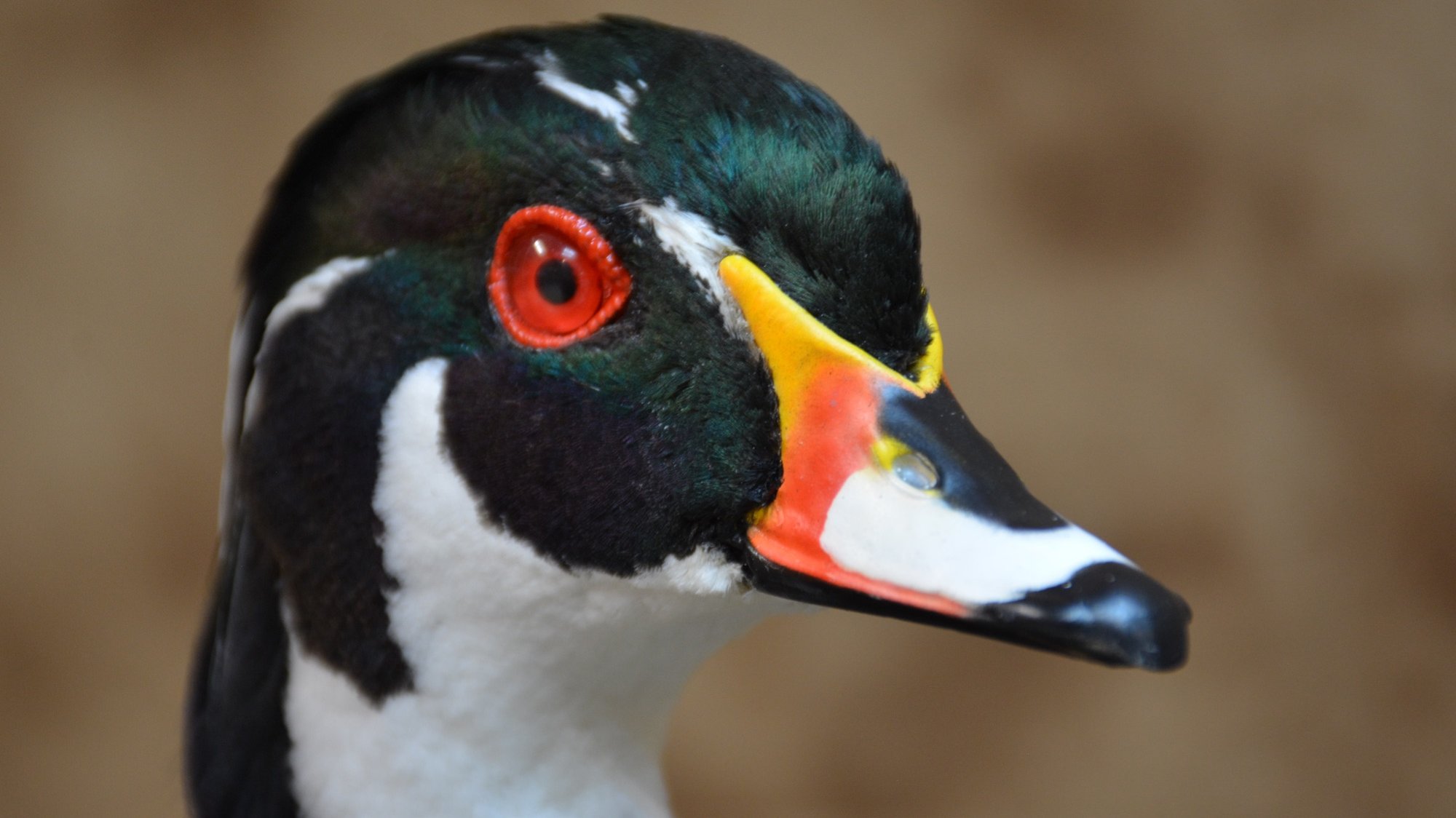 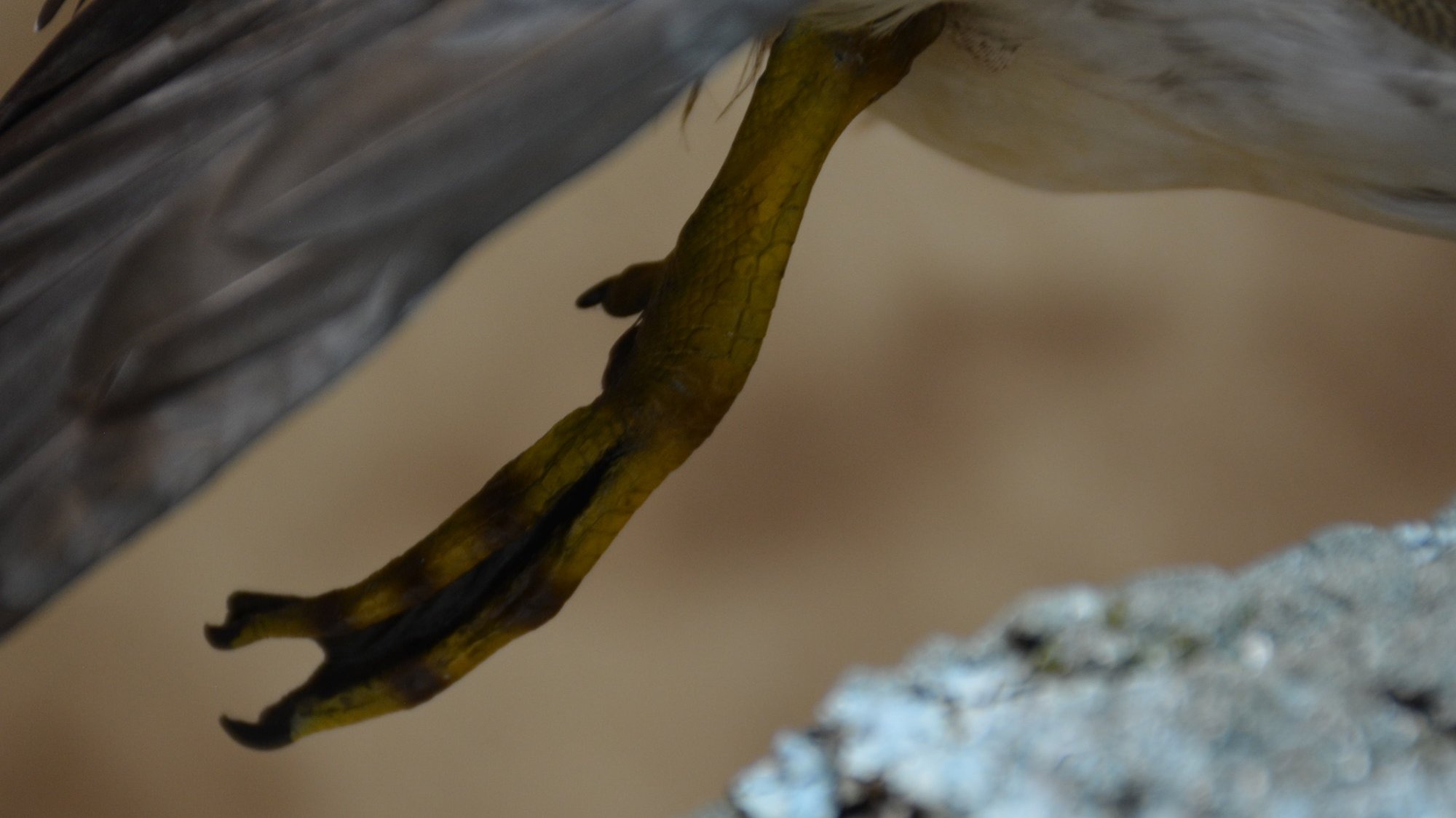 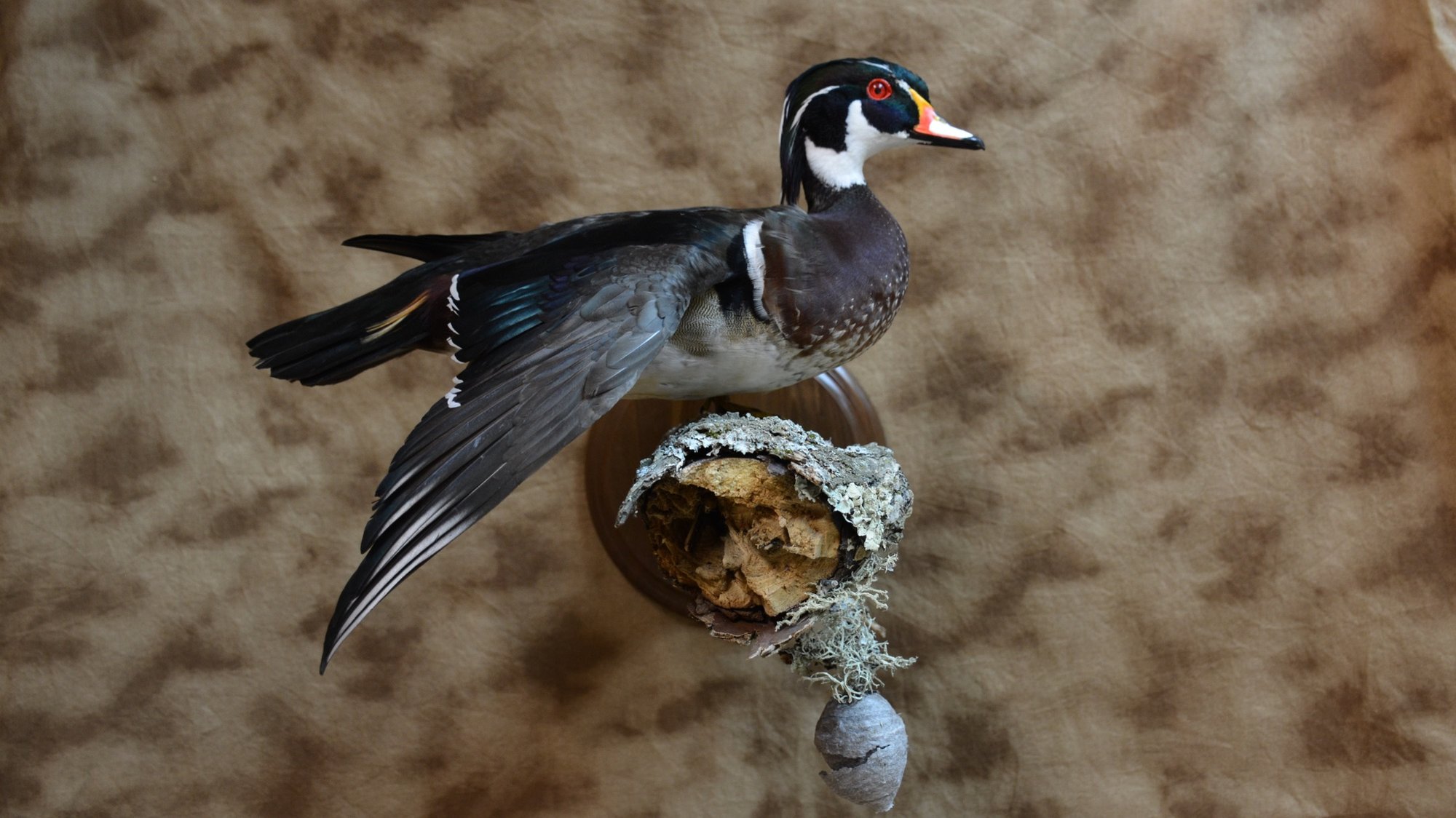 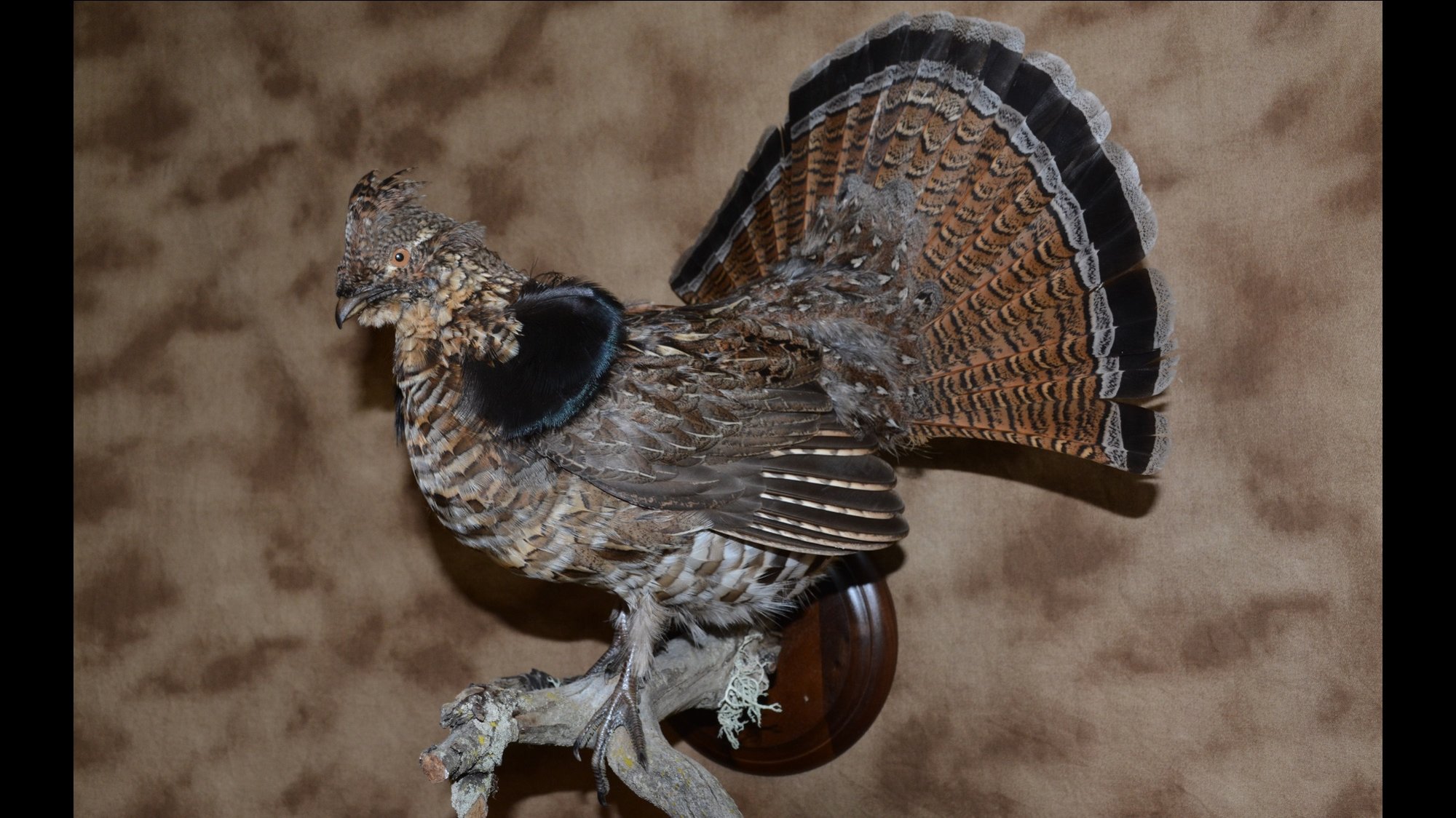 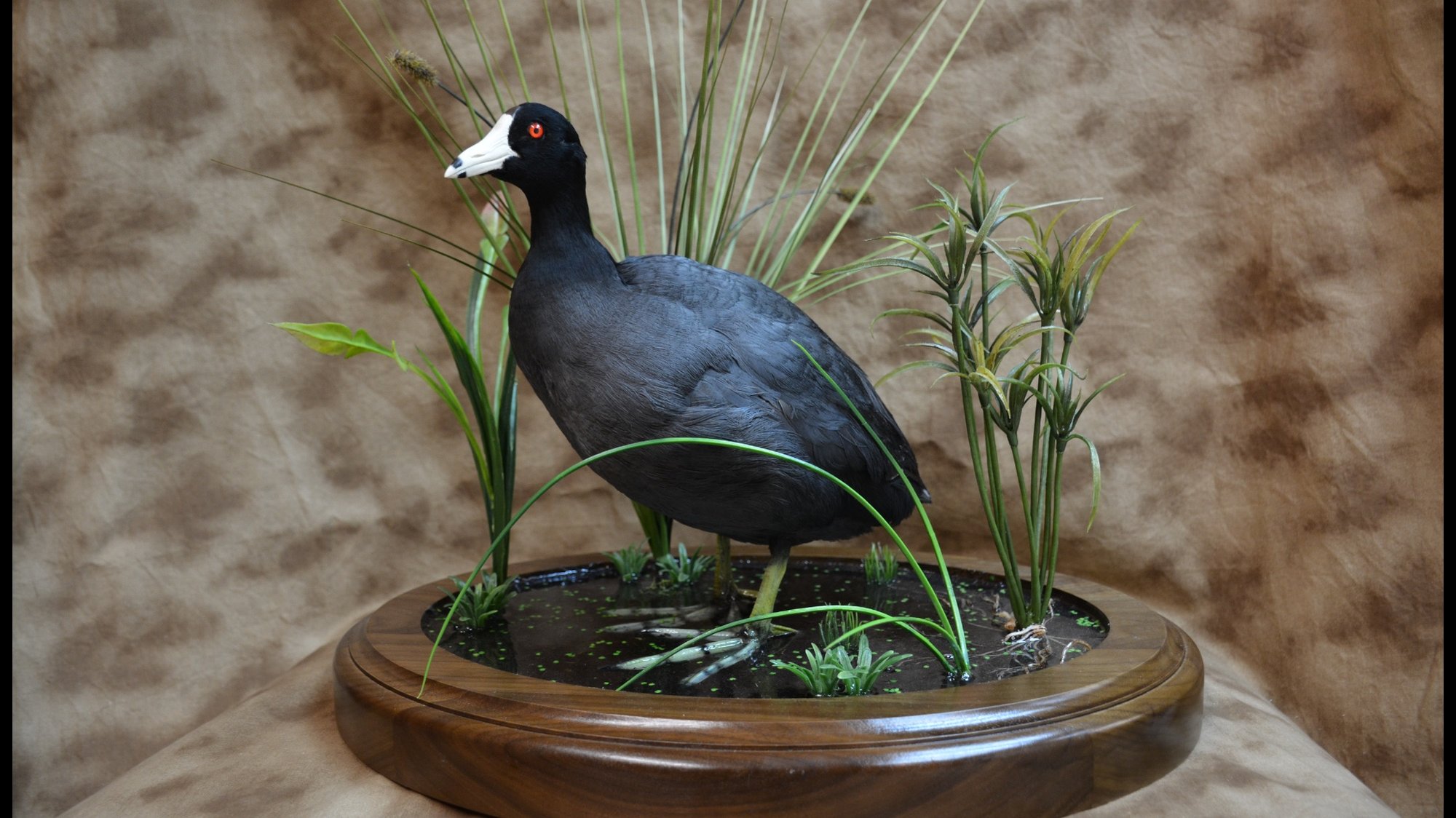 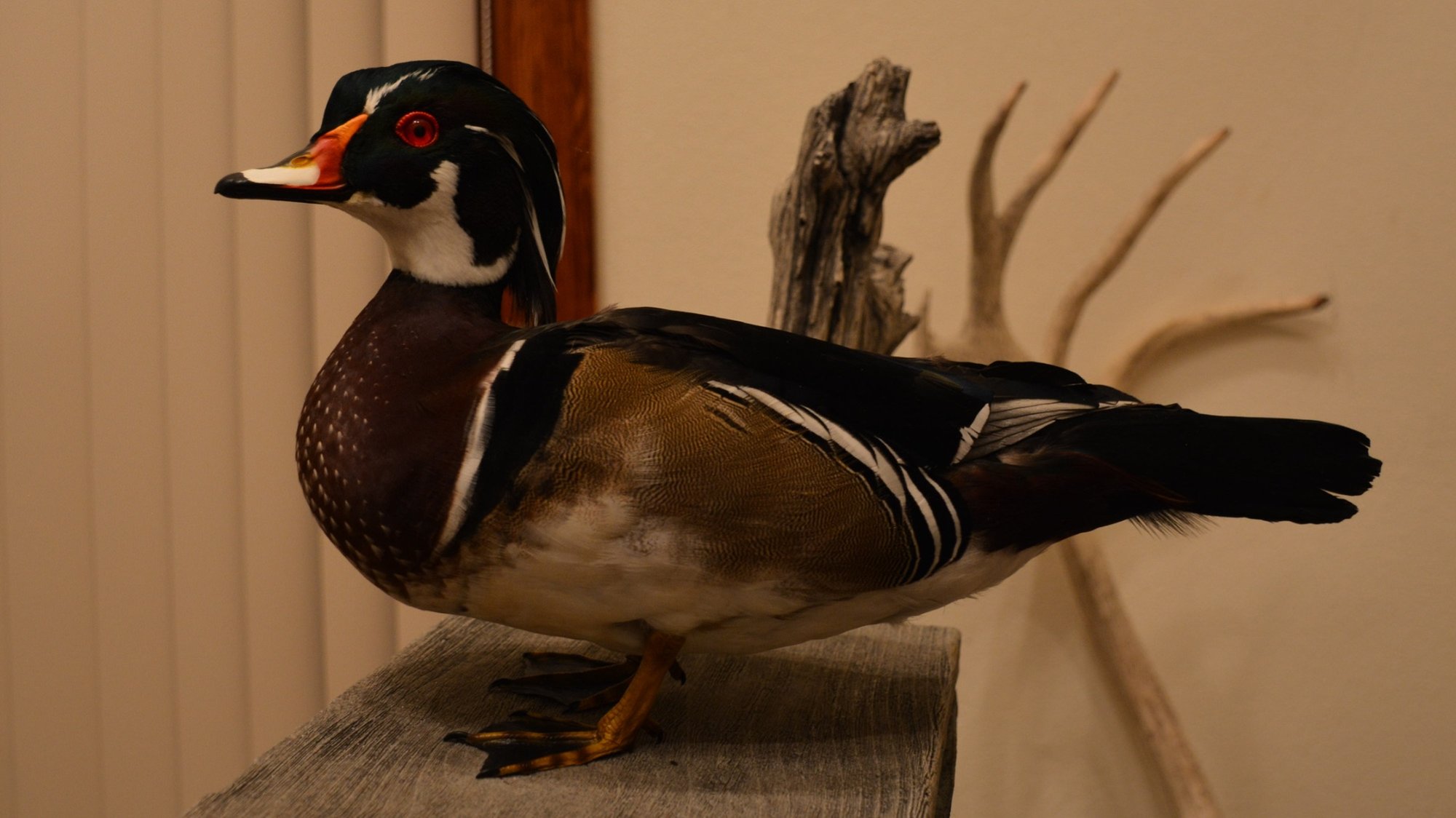 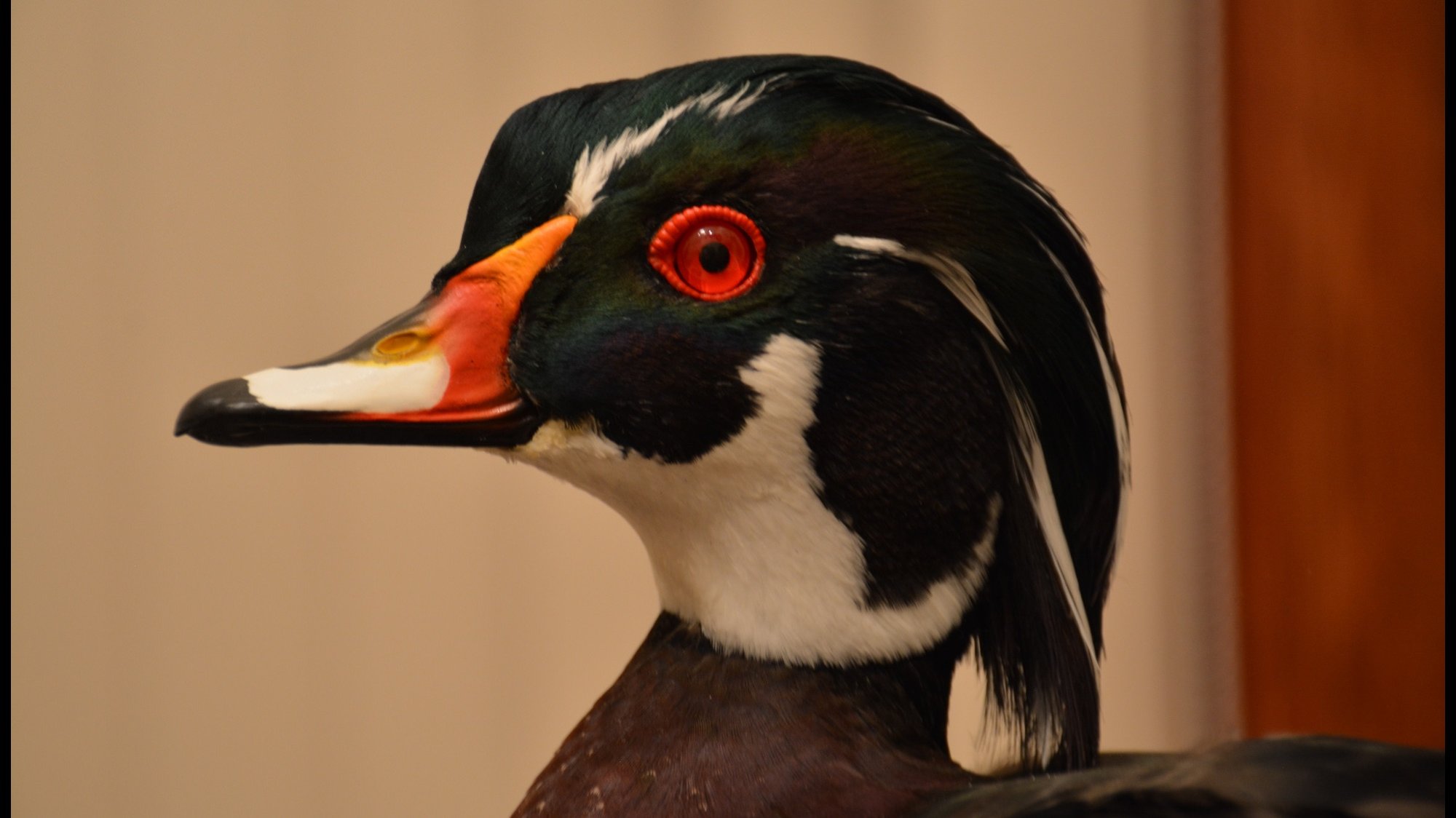 N F C said:
Those are amazing!
Click to expand...

nice work! did you have to do apprenticeship first? I will have to stop back as my internet is only allowing three images to show up ughh!!

Sally Sunshine said:
nice work! did you have to do apprenticeship first? I will have to stop back as my internet is only allowing three images to show up ughh!!
Click to expand...

Thank you. Kinda, my dad does taxidermy on mammals but never birds. So I pretty much just taught my self and watched videos.

This will probably be a long post - I tend to get wordy and post lots of photos! Hobby number one is quilting. I love it. I started quilting long before the "quilt resurgence" in 1976, which was the time of the Nation's Bicentennial when everyone suddenly seemed to want to get back to the old ways. In fact, the neighbors used to refer to me as "that poor lady down the street who has to make her own blankets." Yeah.

I don't have room in this old trailer house for all my quilting stuff, so a good friend gave me a full sized travel trailer that she used to use to house her temporary hired farm workers. It sat in a barley field for many years, so I had some evicting to do - in fact I came down with Hanta Virus from evicting those little critters and cleaning up after them. Then I had to mouseproof it so that I wouldn't get more after we moved it to my house. It sits in the back, behind the garage, and is my sanctuary. 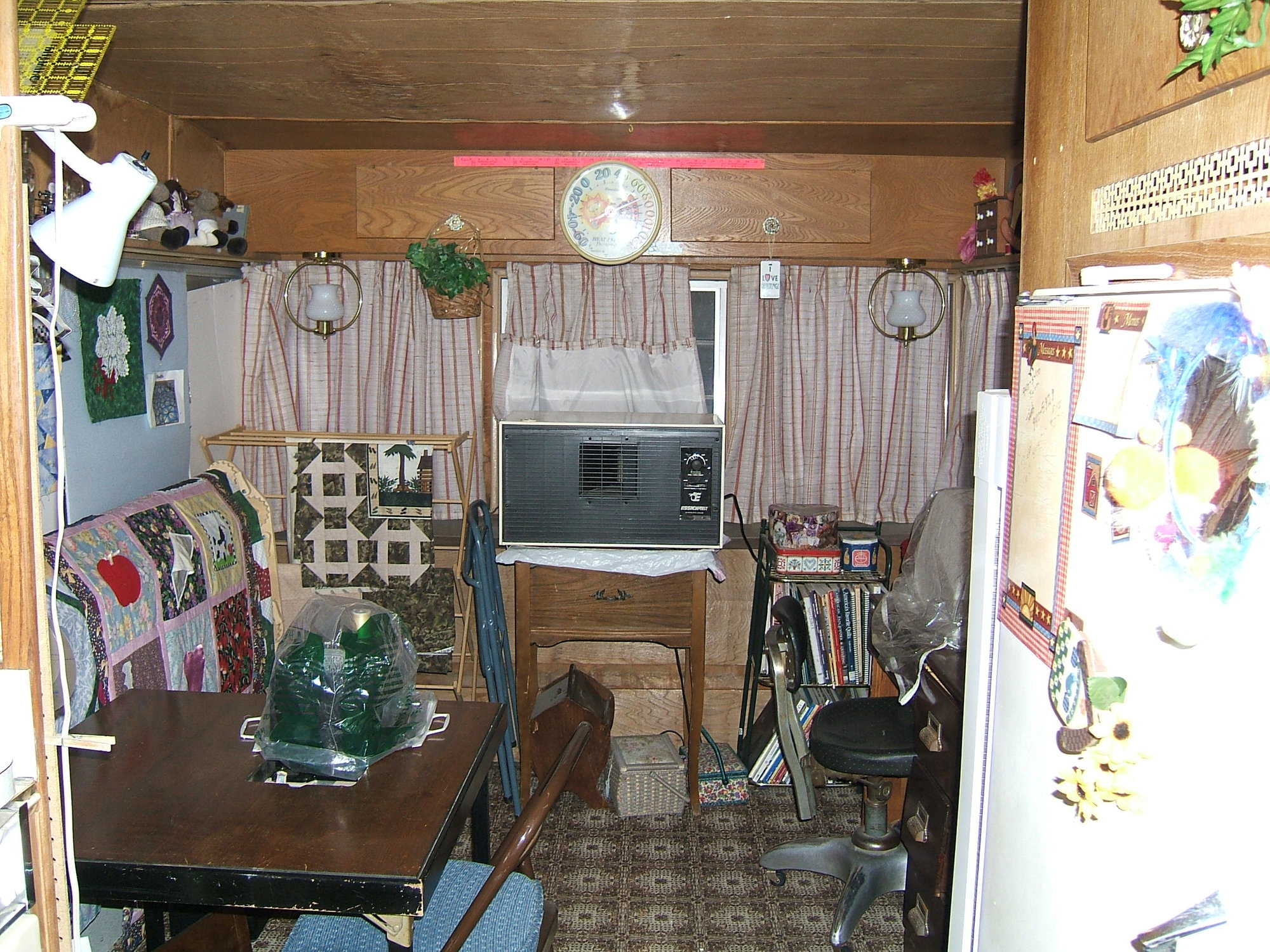 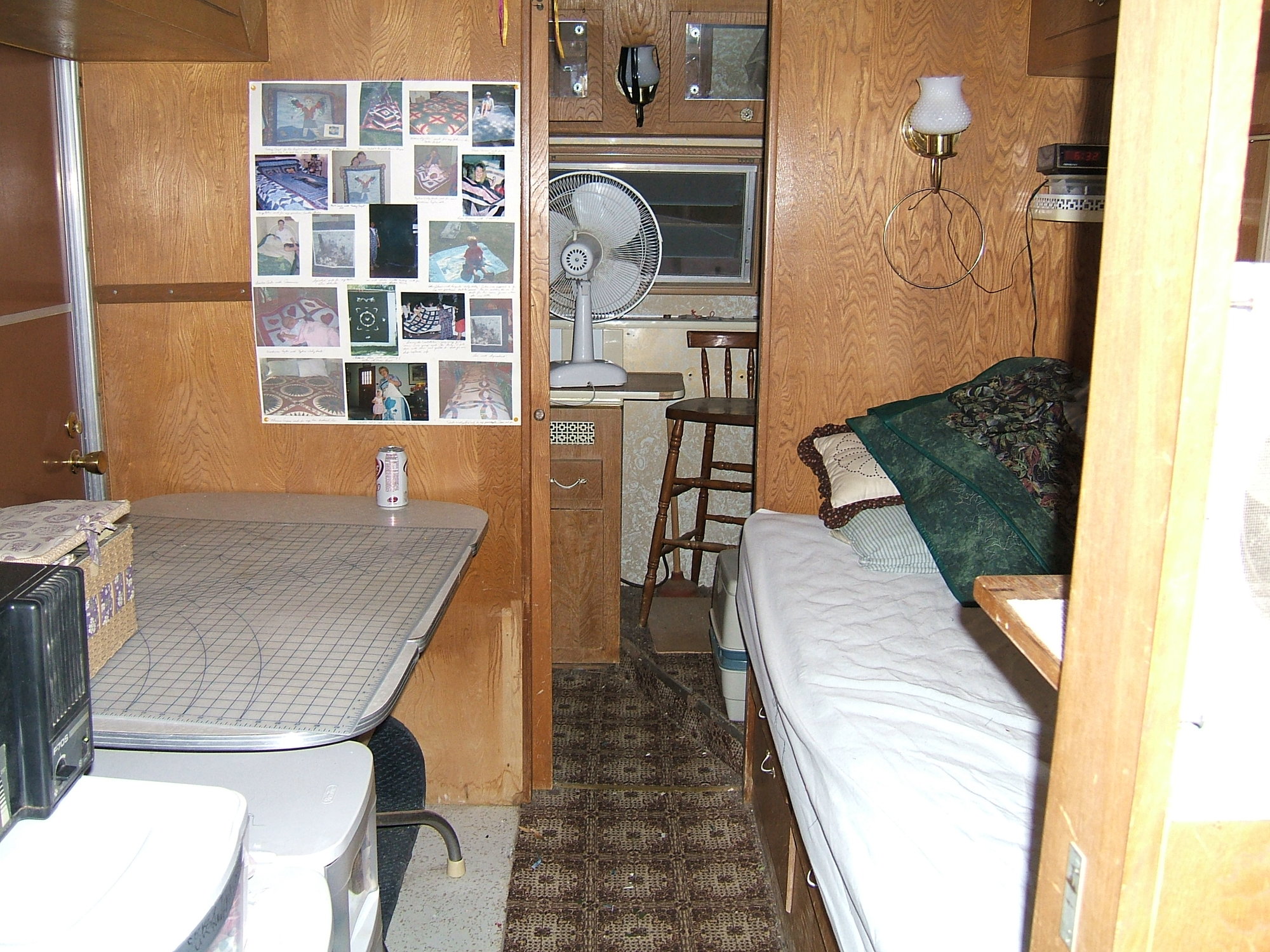 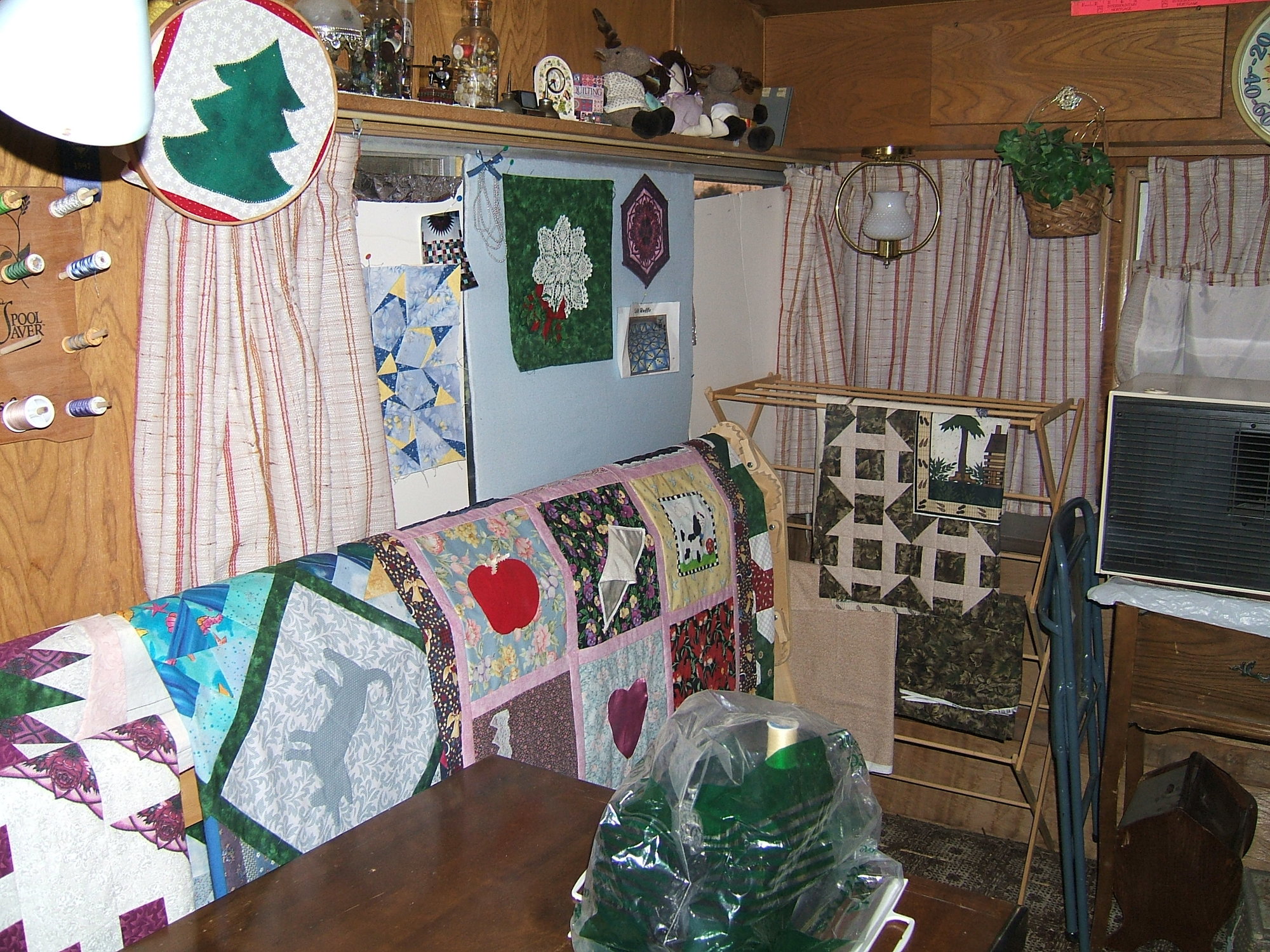 I don't know what I'd be considered. I've won several ribbons in quilt shows, have sold a few, and used one in a raffle for a dear friend who's daughter was almost killed in an ATV accident. I've also got one quilt that has been featured in a quilt magazine. I made it memory of my mother, who loved to garden and who we buried on a Christmas Eve. It's official name is "I Remember Mama" but somewhere in it's construction it became known as "The Albatross" and the name stuck. Most of them I give away, with strict instructions that they are not for show if they are bed or baby sized - I want them used and loved to death. Here are few of them: 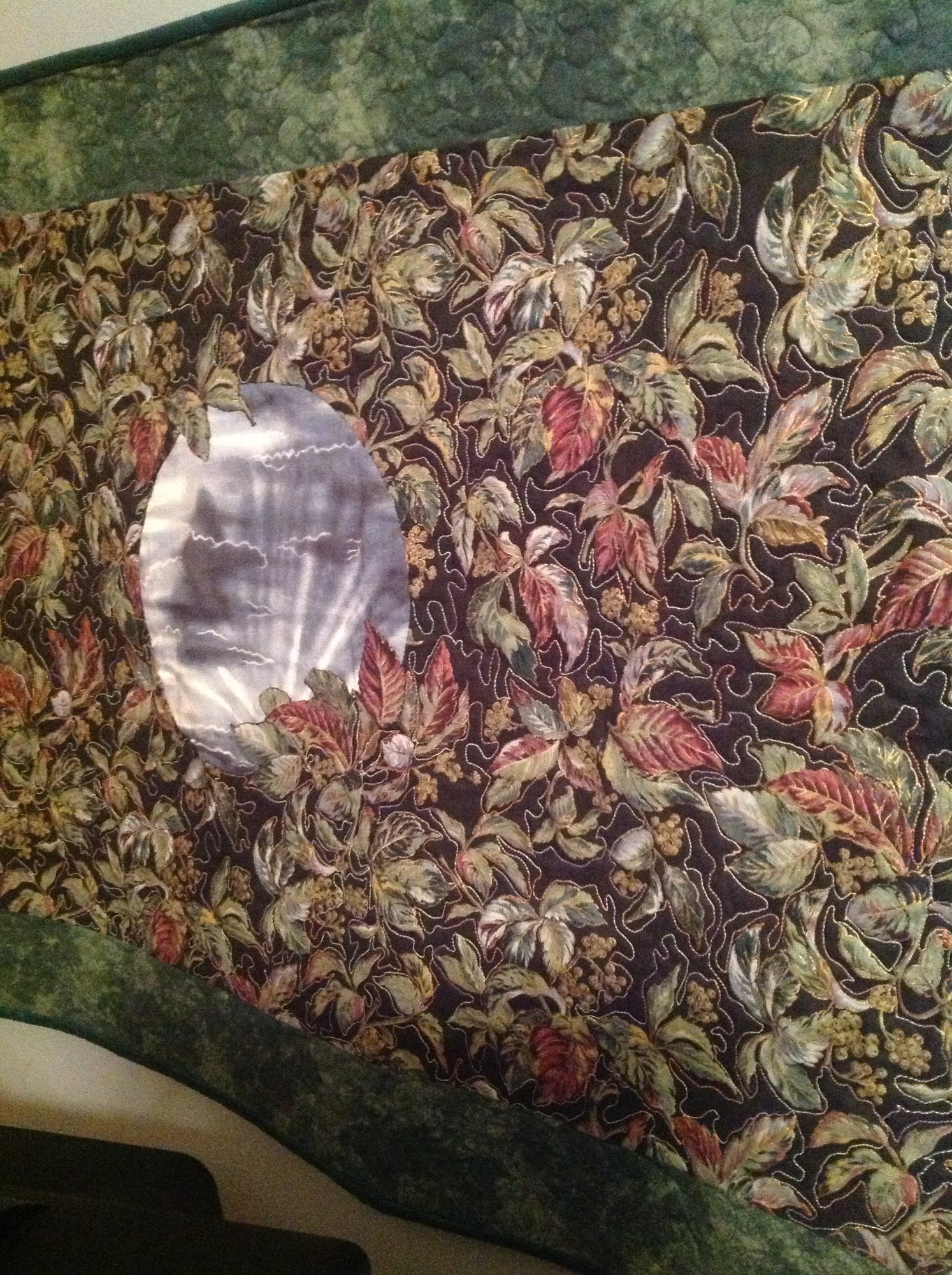 Moonlit Garden - a wallhanging for my sister Linda, who we lost to kidney failure last summer. 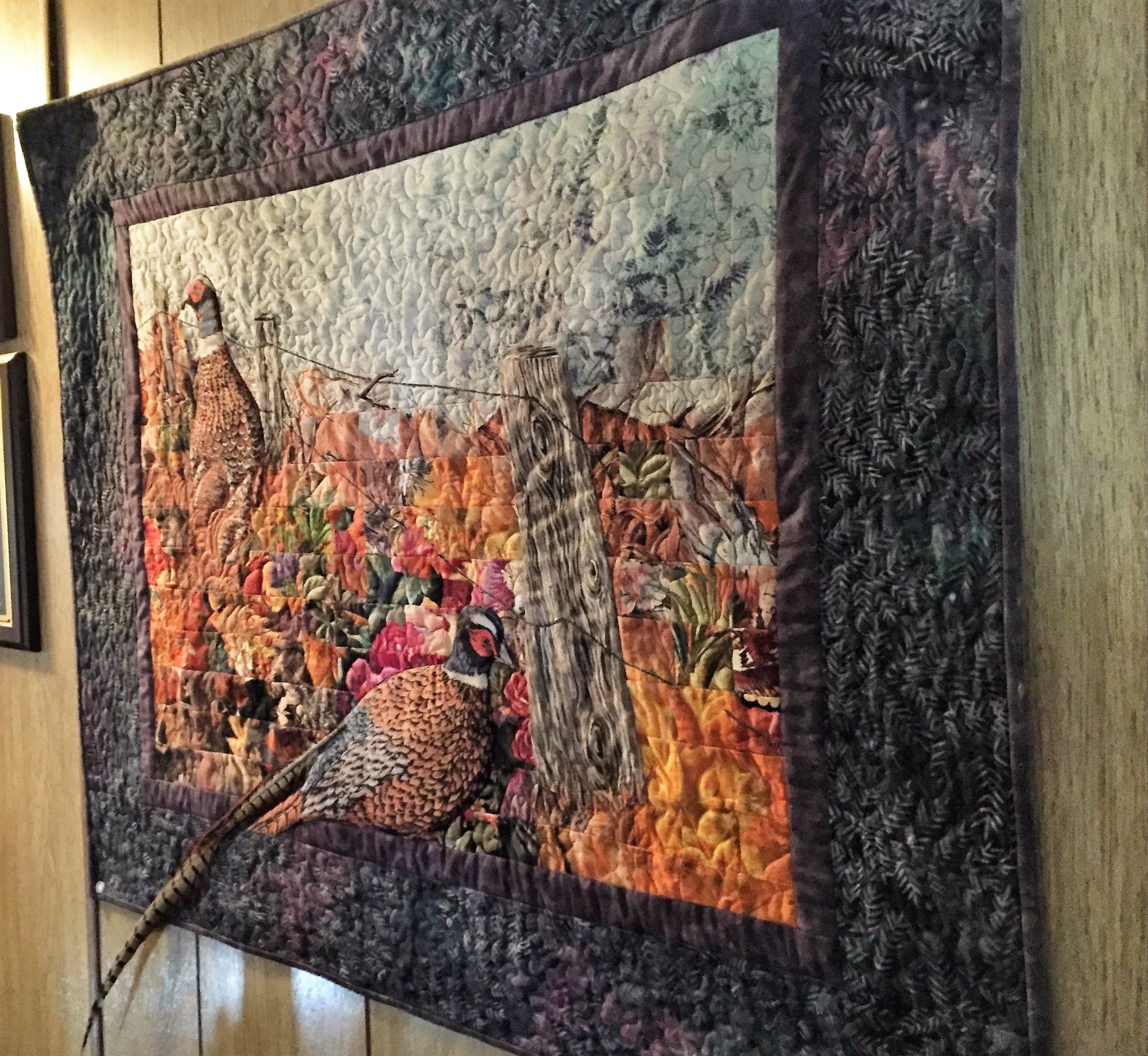 Hidden in Plain Sight That's a real pheasant feather sewn into the quilt. Ken's favorite. Made with 2 inch squares. 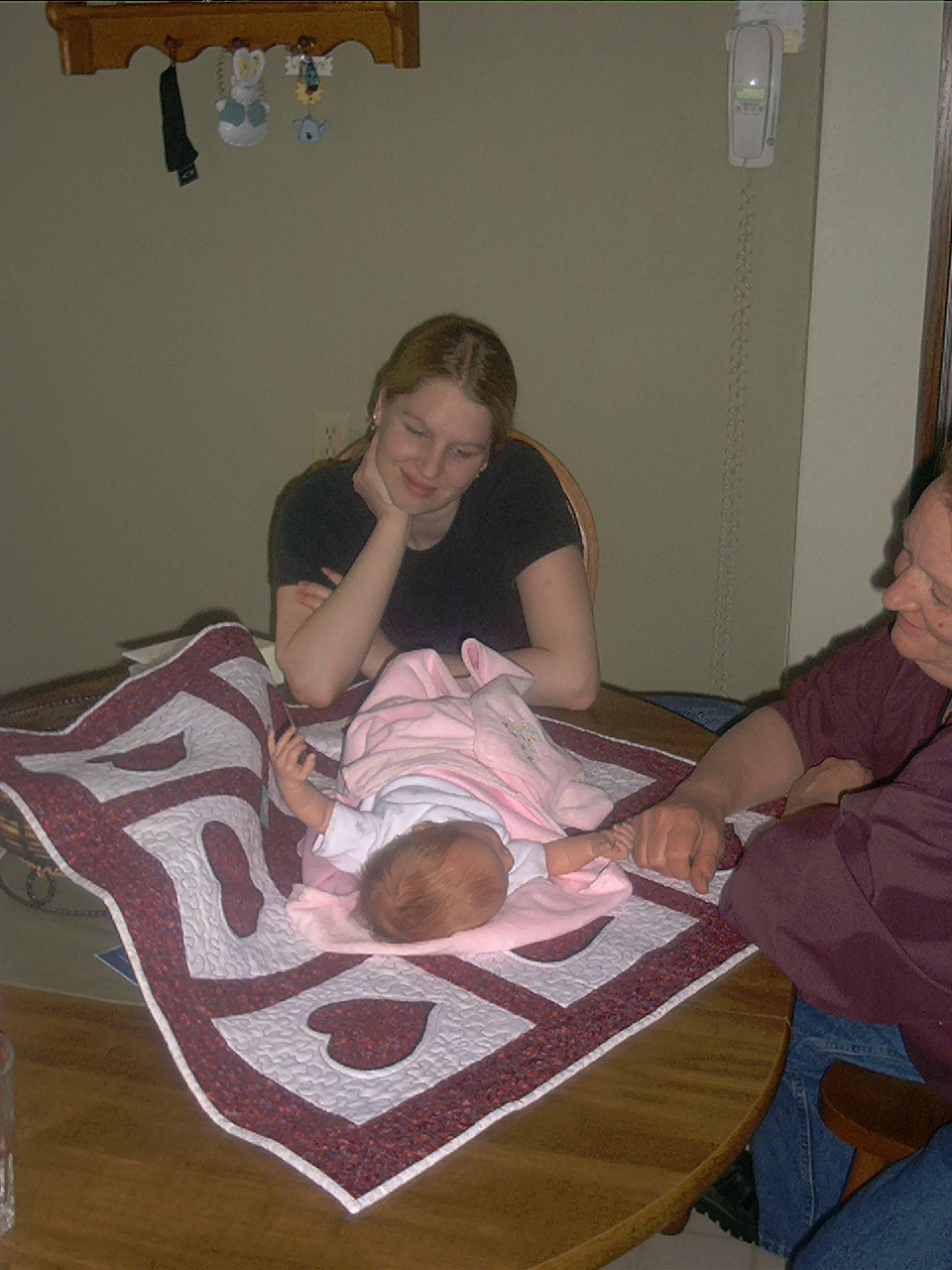 Love from Auntie A heart quilt for one of my great-nieces. 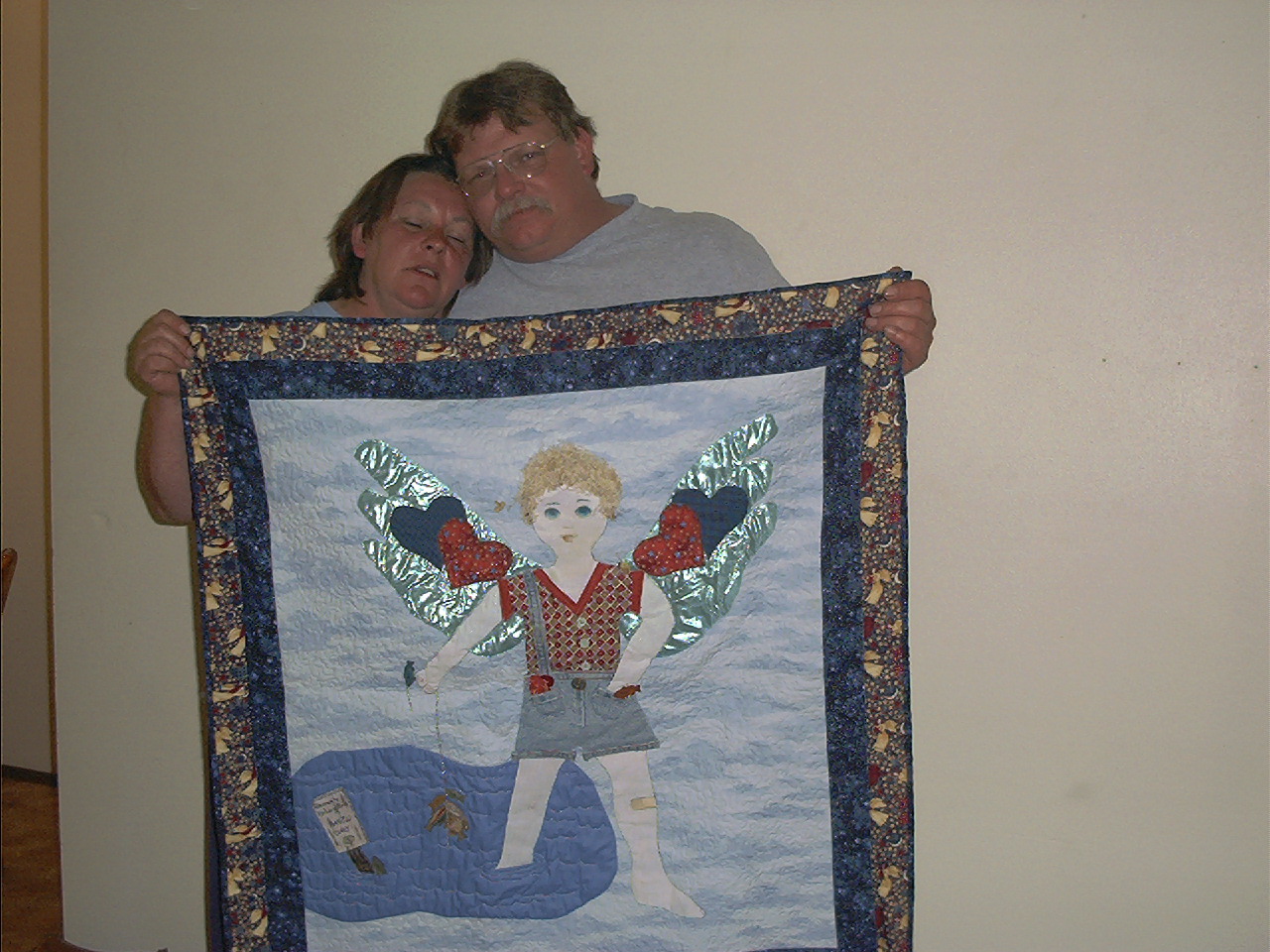 Still Fishing in But in Heaven, Dad This was made for my brother and his SO after the death of their 8 year old son Coty in a house fire. The day I gave it to them, Connie had just been released from the hospital from the injuries she suffered trying to get Coty out. Coty was severely autisic, and his big thing was fishing, anywhere, anytime, or just pretending in the play boat my brother had built for him in the back yard. One of the songs at his service was "Fishing in the Dark." He was such a love, always wearing either bib overalls during the colder months or bib shorts in summer. 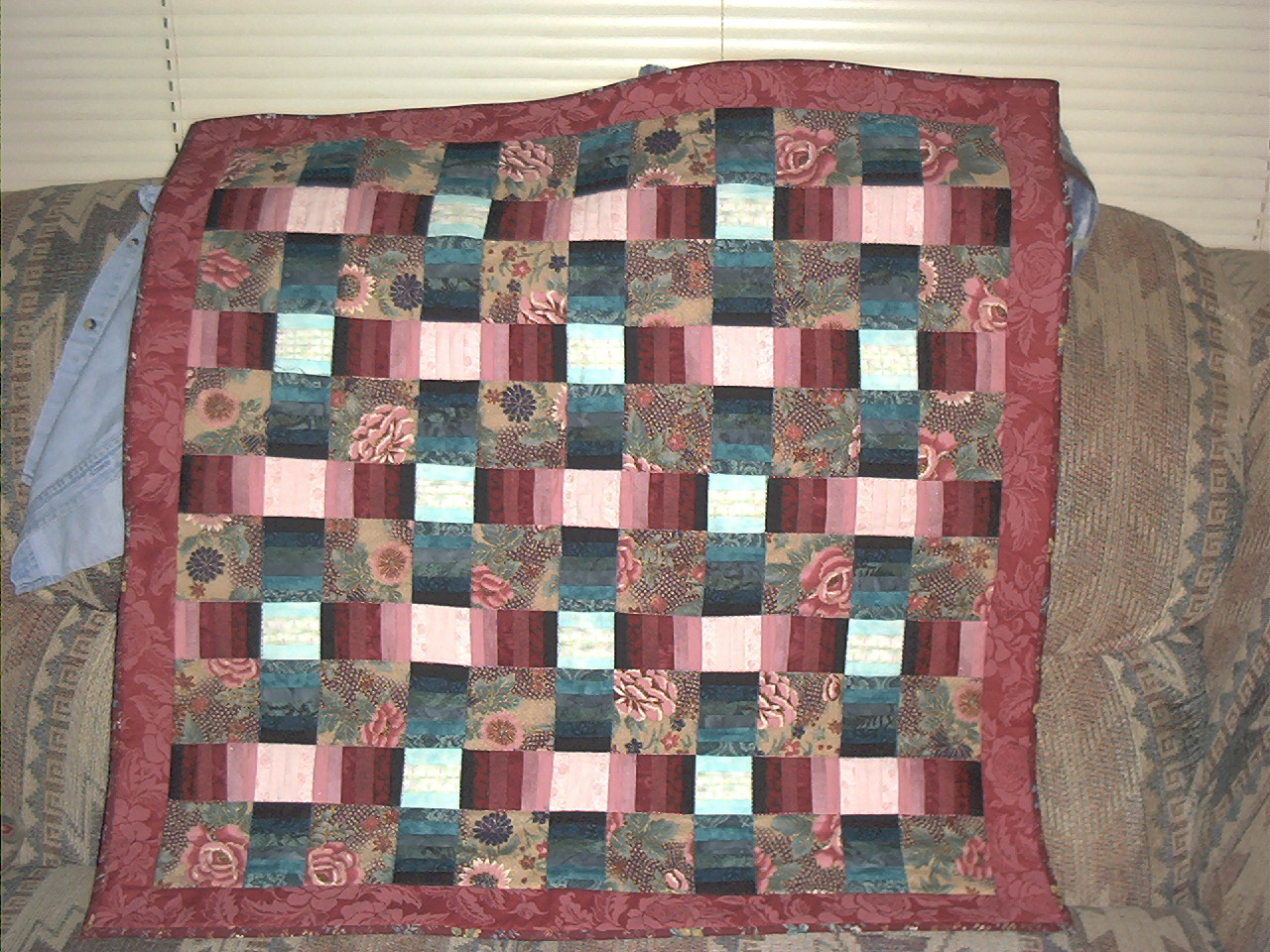 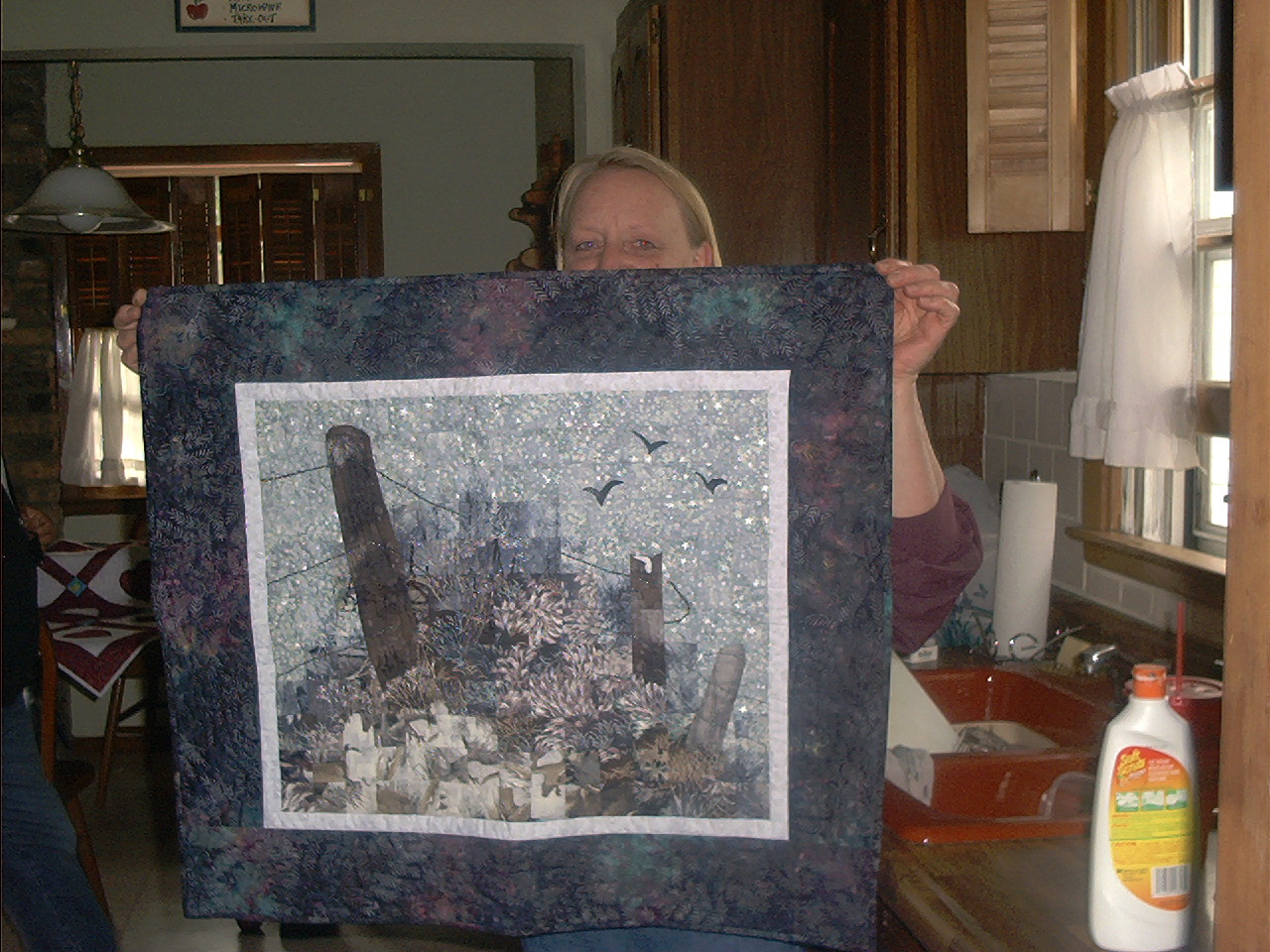 Winter in the Field Made for my sister Lori (pictured), who wanted a wallhanging for her new house. Again, 2 inch squares making up that scene. 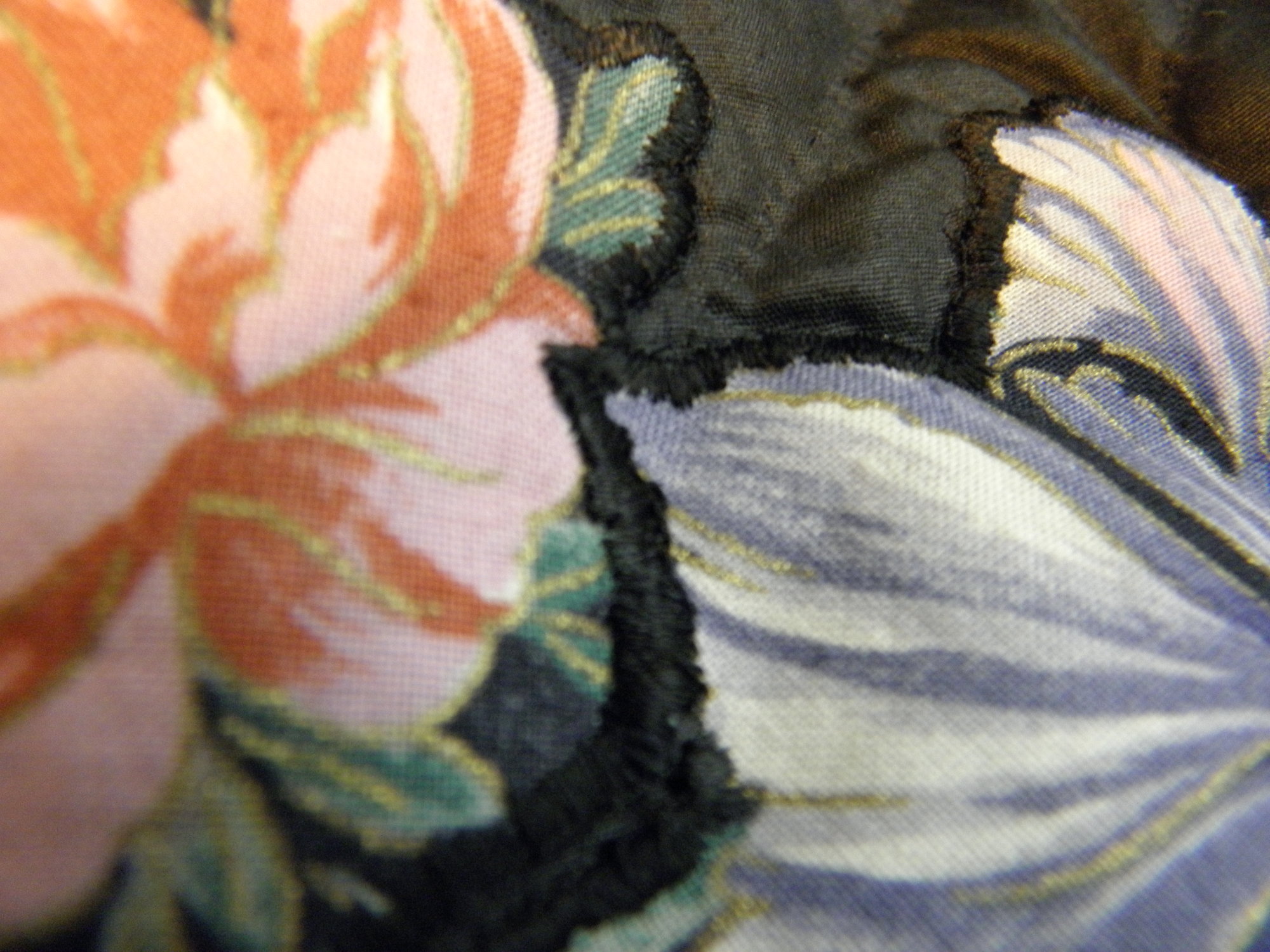 The Albatross - this is just a closeup of the stitches, each one put in by hand, in a mostly forgotten technique called Broderie Perse. I used black silk thread, the quilt was black polished cotton. I was fine when I started - 4 years later I was wearing tri-focals to finish it. This quilt was never touched by a sewing machine. Every single thing was done by entirely by hand, from seaming the panels together to the applique to the quilt and the binding. 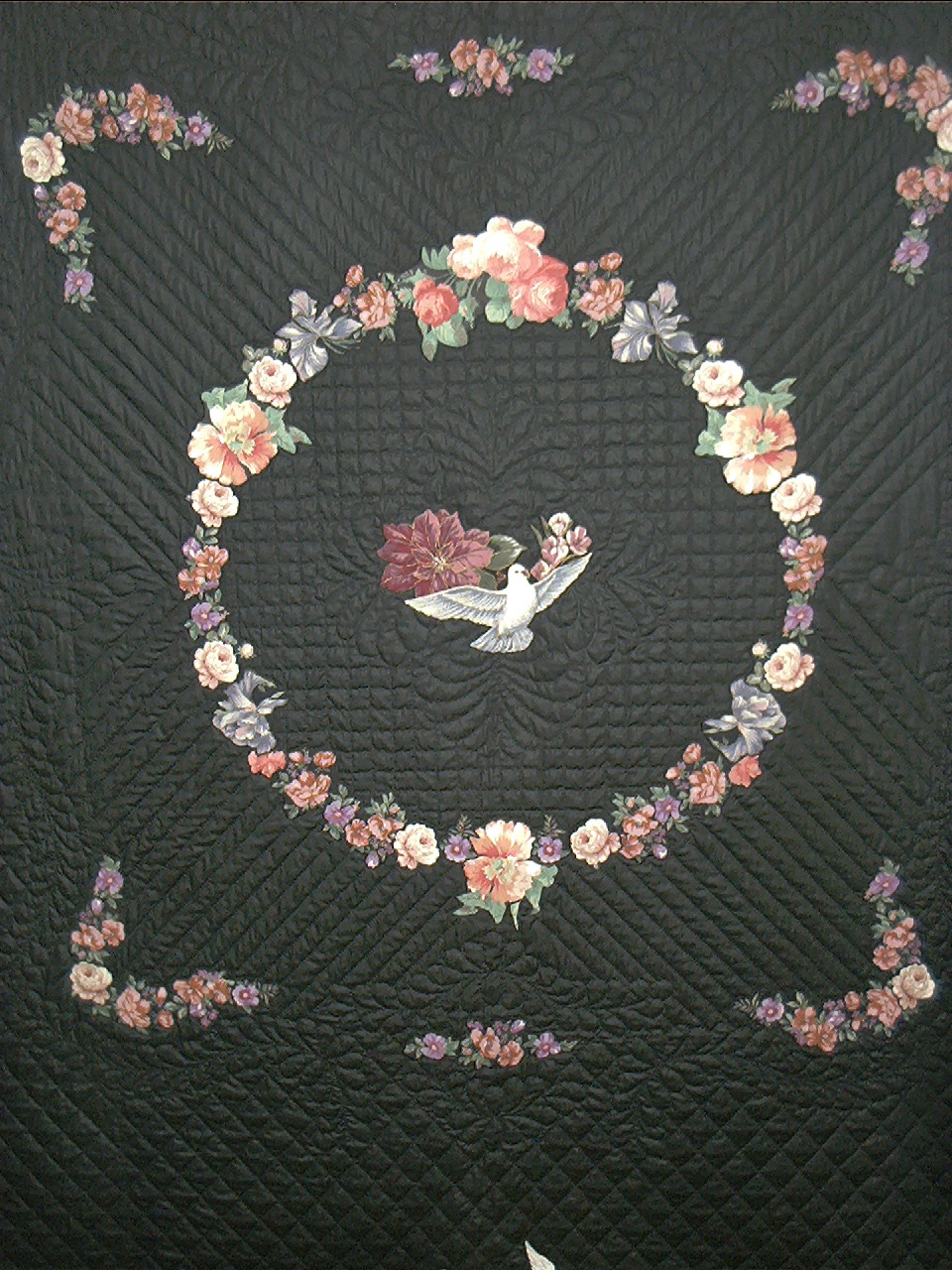 The Albatross - this is not quite a full shot..the dove at the bottom is cut off. But the quilt is really too big to get a complete head on shot of it. It's huge. I'll post one more shot of it so you can see how big is really is. 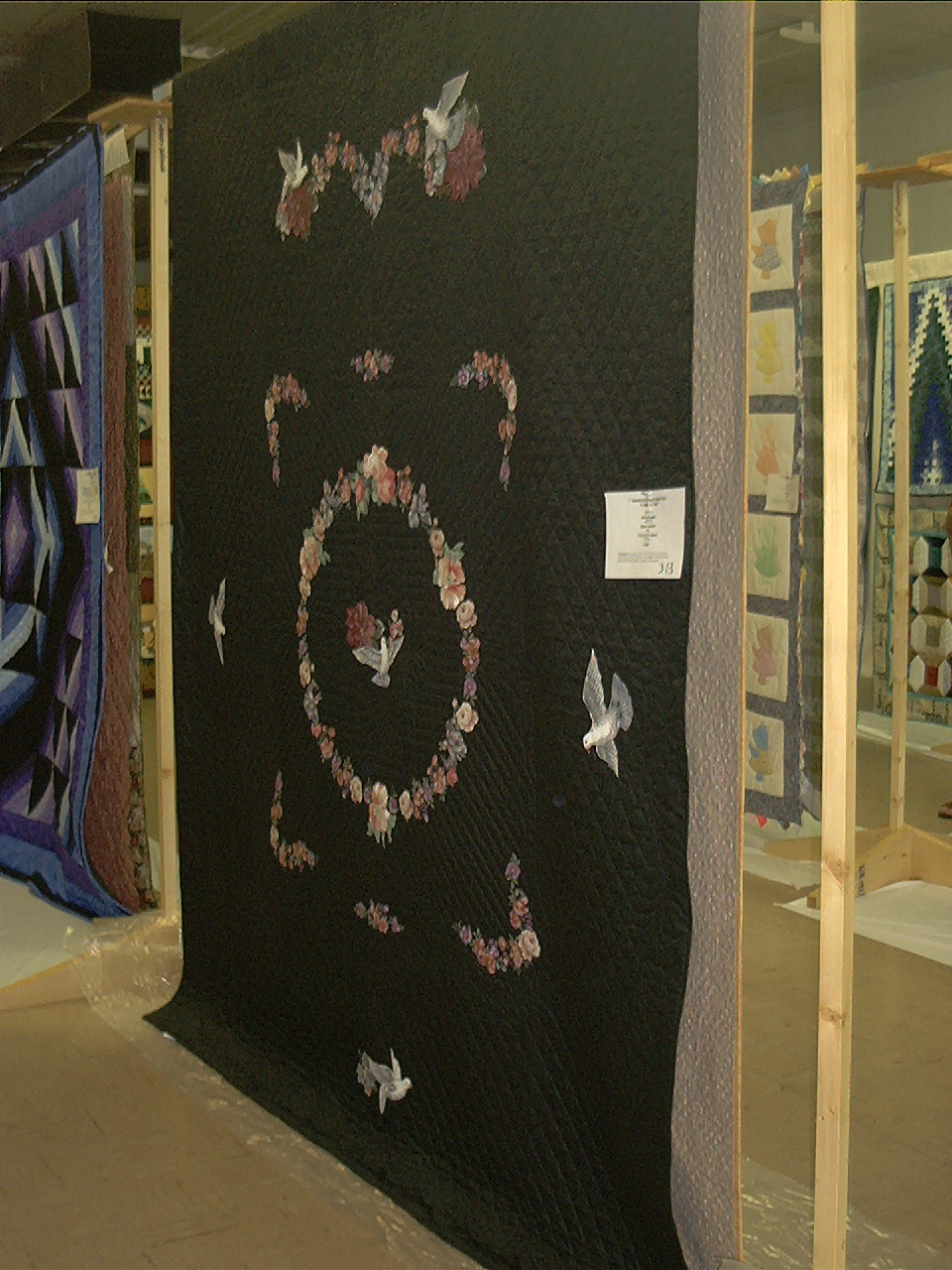 The Albatross - in a quilt show. 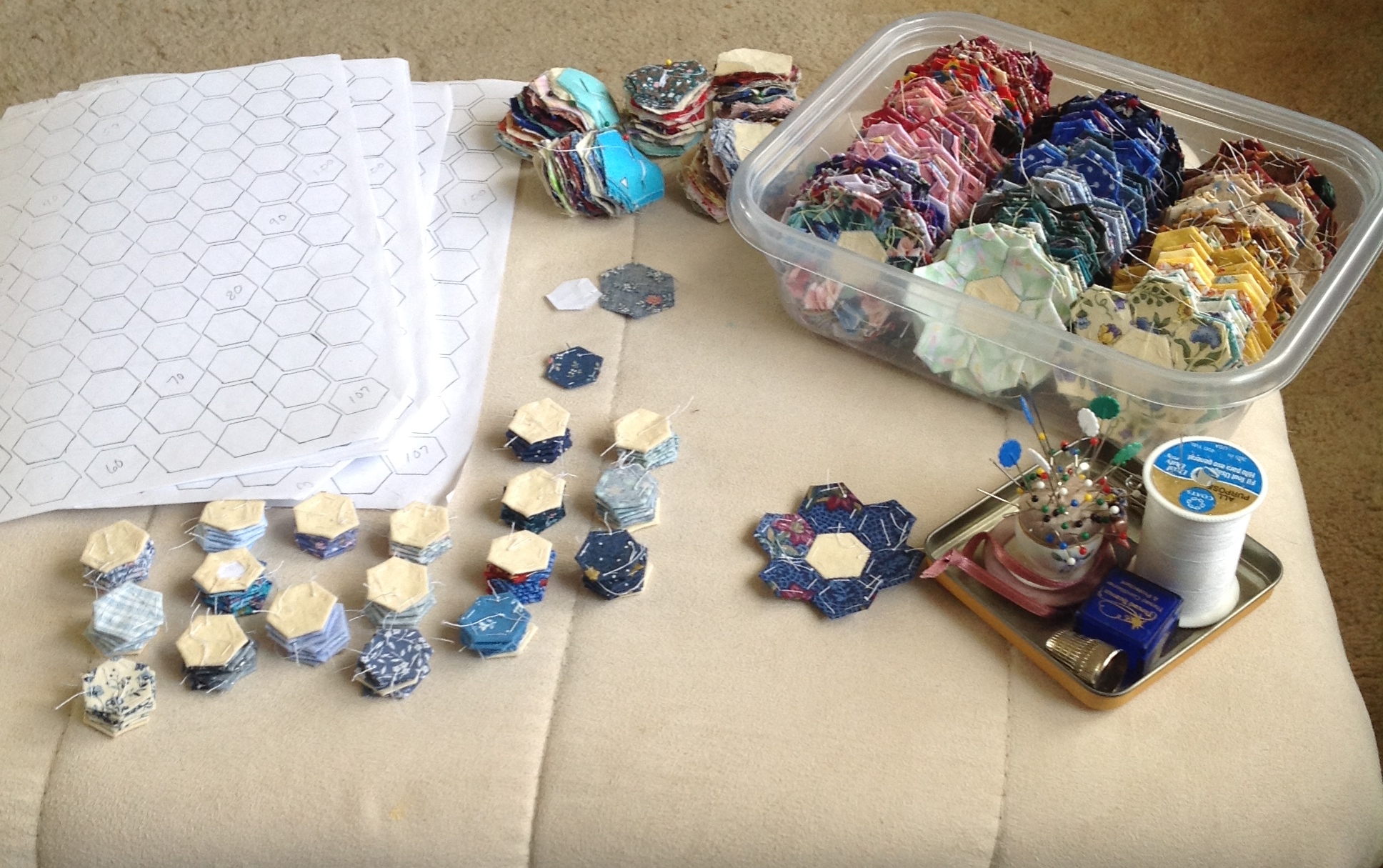 My latest project. You can get some idea of the small size of the "flowers" by comparing them to the spool of thread. Dunno why I started this one but now I have to finish it. I don't work on it very often anymore. After my botched neck fusion, it's hard to hold my head down long enough to sew. The papers with the hexagons on them? I have to cut each of them out, baste the little fabric hexagons to it, sew them together into a flower, then use the flowers in the quilt. I only need 500 of them. <sigh>

I have many more photos of other quilts I've done over the last 48 years, but I think I've bored you and taken up enough space on the thread.