Official BYC Poll: What Do You Use Your Rooster/s For?

Ascholten said:
One of the guys at work brought a rooster and let it loose on the plant site. Given we are pretty much situated in the middle of a forest, it is not too bad. The thing actually was not that bad, the guy who turned him loose said he was attacking you as you walked out the door, well he behaved at the plant. Eventually someone snatched him up and took him home for their flock, was worried the bird would start pooping on cars or something. With 100 acres or so, I didn't see that as a problem but he's in a good home now. The biggest problem we had with him was he'd want to roost in the garage at night, and sit at the top of the stairwell, and when you opened the door to come out of the shop, it'd bump him, startle him, and you too and well...you get the idea.

He was the night watchman for the plant? What did you pay him?
O

The rooster I have at the moment in a black sex link. He waits outside in the summer when the hens are free ranging and he will not go inside till the last hen has gone in.....I have seen him go around the yard looking for a hen that has not gone inside yet.(5 +acre ) he is a very good protector.

I actually loathe roosters. I can’t even describe my loathing of them. I cannot stand their raping behaviour, the constant attitudes, and the crowing. We have a guard goose who protects our girls better than any rooster we have ever had, including the three (will only be one this spring) who think they’re “all that”.

Despite my dislike of roosters, I do like the fluffy babies that hatch when we did an incubation one time. They are also tasty. Oh. And we have a hen who likes roosters way too much, if you get what I mean.

P.S. I promise I’m not attacking anyone who likes roosters.

olcarguy said:
The rooster I have at the moment in a black sex link. He waits outside in the summer when the hens are free ranging and he will not go inside till the last hen has gone in.....I have seen him go around the yard looking for a hen that has not gone inside yet.(5 +acre ) he is a very good protector.
Click to expand...

You have a very good boy there! Hopefully he’s sweet to you too.

I don't "use" my five roosters for anything. They use me to provide them with food, water, shelter, treats, something to attack, etc. They are my reminder never to let my hens sit on eggs again! The roosters are in two areas of their own and not with the girls. I love the boys' beauty and crowing but not much else!
O

ChassiNoir.....Yes he is a good boy, He never bothers me, I think he knows where his next meal is coming from. He dosn't let me get close to him at all, which is troublesome because he has a bad case of frost bite on his Comb, can't get near it even after dark....? None of the hens are having any trouble with there combs.

olcarguy said:
which is troublesome because he has a bad case of frost bite on his Comb
Click to expand...

@olcarguy Leave it alone, it will heal up....but it will take months to fully heal.
https://www.backyardchickens.com/articles/frostbite-in-sw-michigan.74597/
A

ChicKat said:
The one that is trying to crow.....

Seriously though, look very carefully at the comb. The one with the biggest, pinkest comb is probably him.
Click to expand...

Kinda hard to tell, they have black skin…. None of them really have combs yet…. I guess wait and see!

BYC Project Manager said:
There are a lot of different opinions on roosters. Some people hate them and think them the devil, some think that they're unintelligent, yet roosters can be really fun to be around and form an integral part of any flock. People keep them for a variety of reasons - do you?

What do you use your rooster/s for? Place your votes above (you may select more than one)

Feel free to share any other reasons you keep roosters in the comments section below.

So far my rooster is doing well. I have 1 rooster and 12 hens. That seems to be a good ratio. The best thing about him is he gets the hens to go into the coop early at night. Good fir me especially in the winter.

ChicKat said:
View attachment 2536579
He is kept for breeding. Has unique genetics....lavender & autosexing. Some of his sickles drag on the ground. Sweet temperament. It's also nice that he is so handsome, but wouldn't say a yard ornament.
Click to expand... 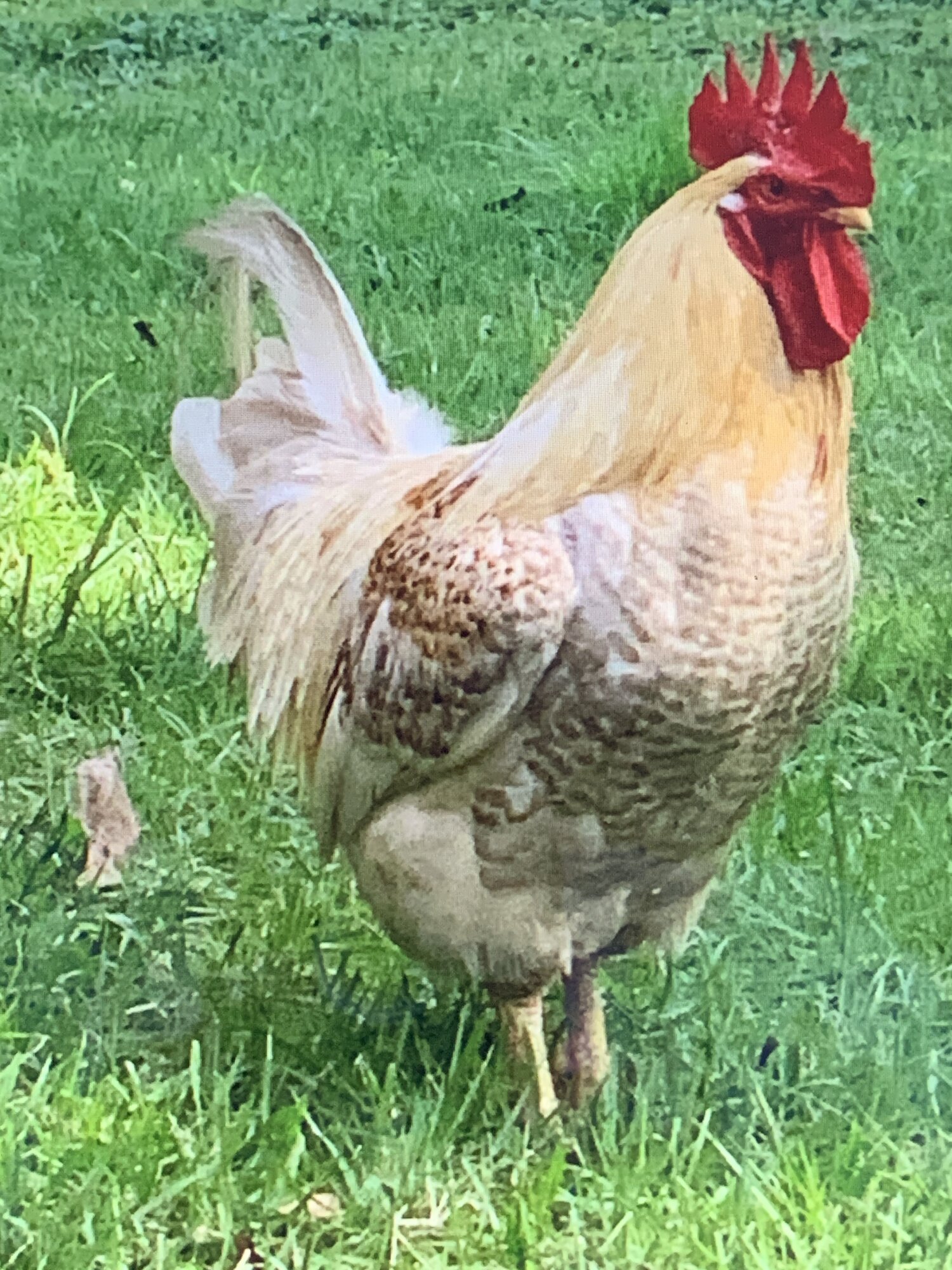 Official BYC Poll: How Do You Keep Your Chickens Happy?
4 5 6