Our Ever Evolving Setup

2010: When we moved to the woods from the city I begged and begged my husband (B) to let me have chickens. Who doesn't want fresh eggs everyday? Just pick up a few things off Amazon and we're set! Boy was I in for a big surprise!

2012: He finally gave in and we started out with 3 pullets and a simple rabbit/chicken hutch that I ordered off of Amazon: 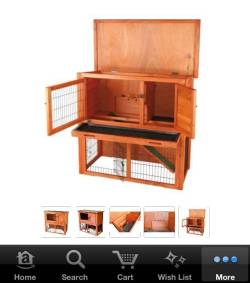 The previous owner of our house left us a dog kennel. B pitched a roof out of some pipe and tarp. Tah-dah! We now had ourselves a proper chicken run! 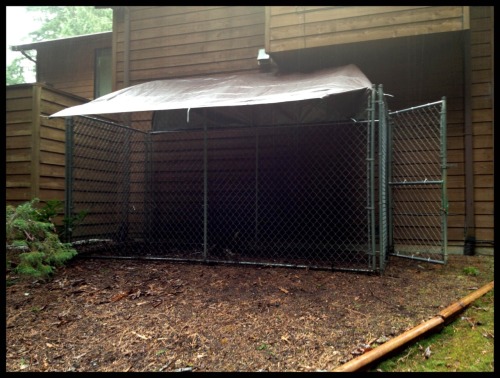 2012: When the girls were full grown the ramp hatch was "too scary" and ramp itself ended up being too steep so B upcycled the existing coop. He added a proper roost, pull-out bottom drawers, nesting boxes and a slightly less steeper ramp: 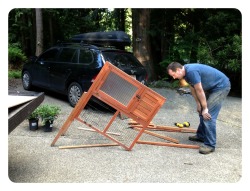 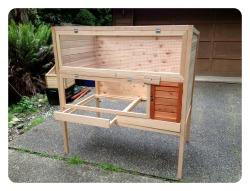 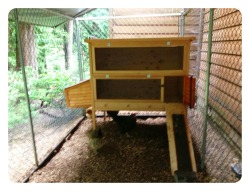 2013: Made coop window covers out of rug runner to help keep the cold out during the winter months: 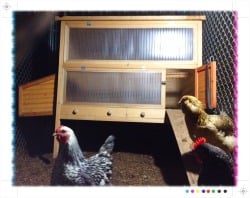 2014: I loved my chickens but hated the icky poo smell so close to the house. We relocated the chicken coop + run away from the house and created a little fenced in area for them (chicken yard) to forage since I was also tired of them f-ing up the landscaping and leaving turds everywhere! 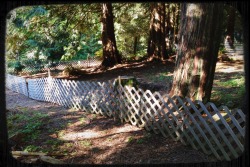 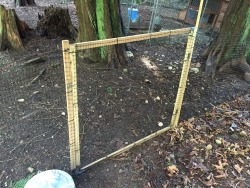 2015: The nesting box covers finally gave out. I replaced them with weatherproof, see-through acrylic (covered by tar paper since the chickens didn't like all the light): 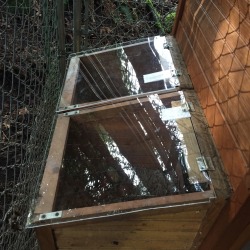 2016: We were going through TONS of pine shavings every week. I installed a poop catchment system for the roost that worked out really well. It helped cut down on pine shavings waste!: 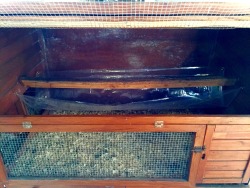 2016: We had a ladder ball game that we hardly used so I upcycled it into a multi-tier chicken roost (which eventually gave out so we had to go back to the single roost with poop catchment system): 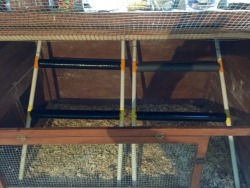 2016: A raccoon started paying visits to the chicken run (dog kennel) and tried to pull a chick out through the chain link so I had to enclose it with metal mesh (on top of chicken wire mesh) to prevent further casualties. I also upcycled the old lattice fencing by installing it onto the chicken run turning it into a little cottage in the woods: 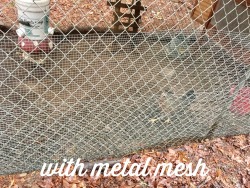 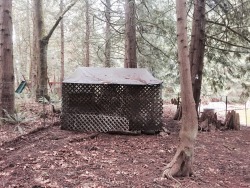 2017: The woodland predators were getting ridiculous! We had owls/hawks reigning down from above, possums/raccoons reaching through, bears/coyotes knocking down the fencing. I was afraid I would have to stop letting the girls free range. I had to reinforce the fence with metal posts and added aviary netting to keep predators coming from above at bay: 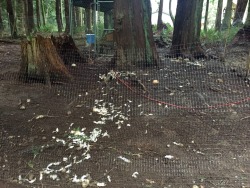 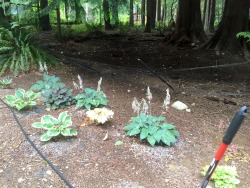 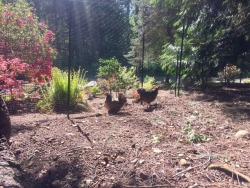 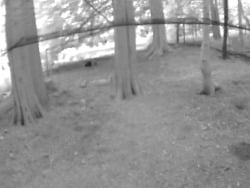 2017: Made a wheatgrass grazing frame out of old wood and mesh we had laying around: 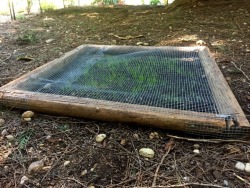 2017: I upgraded the girls’ roost setup after work today based on a DIY blanket ladder plan I found on the internet. The droppings will hopefully now fall through the mesh tray I built and I’ll actually get to utilize the drawers to collect and dispose of the waste (sans pine shavings). 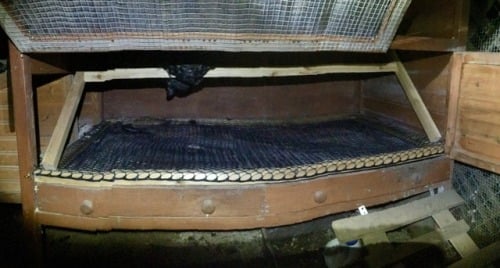 I think our chicken coop/run/yard setup is at a good place right now. I don't want to scare anybody off from keeping chickens. It's been super fun and easy, despite all the architectural and logistical hiccups. If your current setup isn't working, find a solution! Poke around in the forums and see what's working for others and give it a try! I am super thankful for all who post their experiences for me to learn from! Thank you!
Last edited: Mar 21, 2018

Wow! Great work on all of these projects

I took down all the plastic mesh fencing and replaced it with welded wire fencing sometime in January after our last major predator attack. Something came in and wiped out our entire flock save 1 (Black Boots/F1 Olive Egger). I picked up a bunch of bb chicks in the spring to replenish the flock. Here's a little viddy that gives you a quick peek at the new welded wire perimeter fencing and the chicken yard plus our little trouble-maker Blue Polish Bantam squeezing through the fence.

i added some garden beds to our chicken yard so the girls could forage for fresh greens. the mesh canopy helps me help the seeds to sprout then i pick and choose which beds the chickens can have access to: 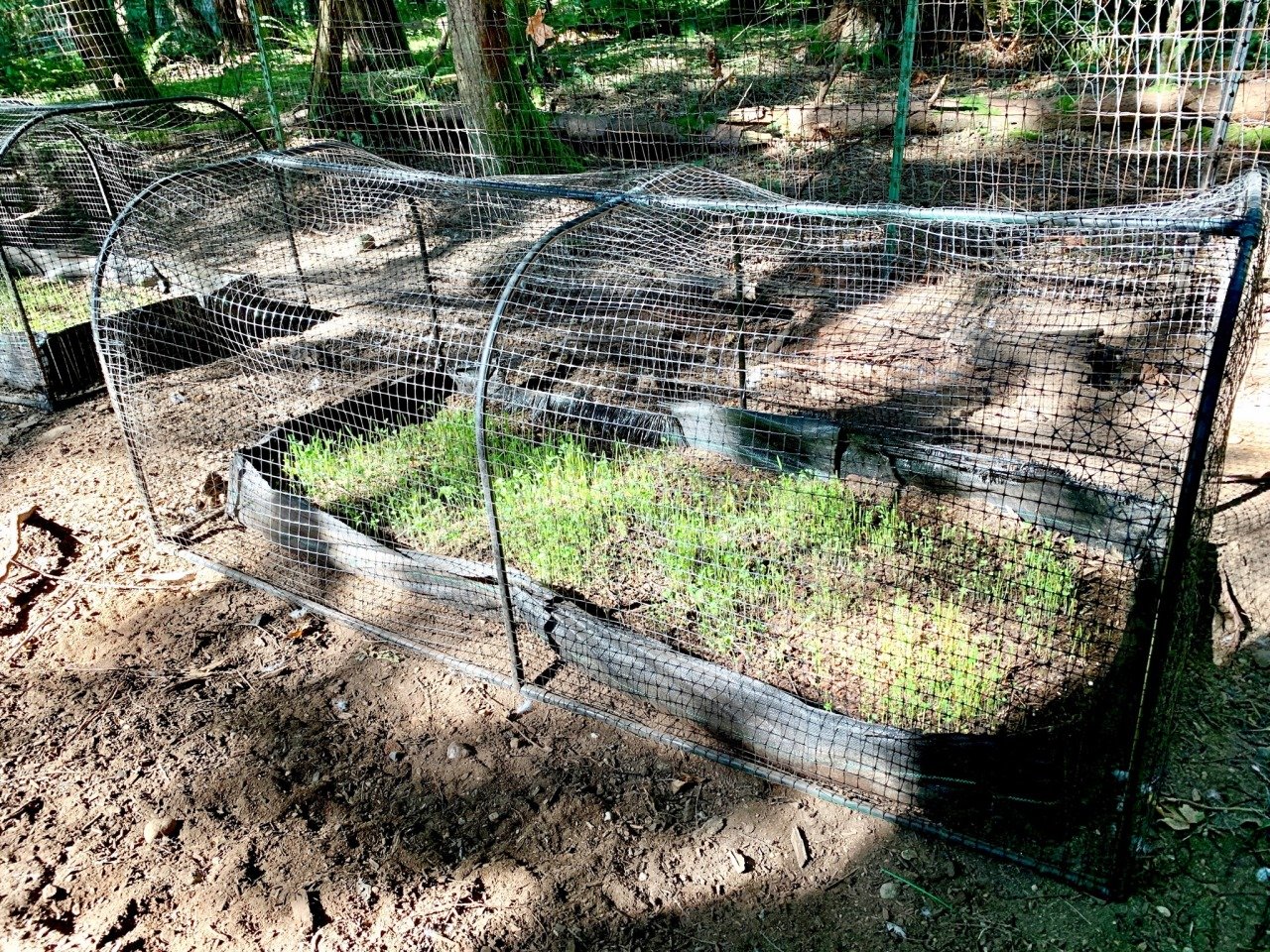 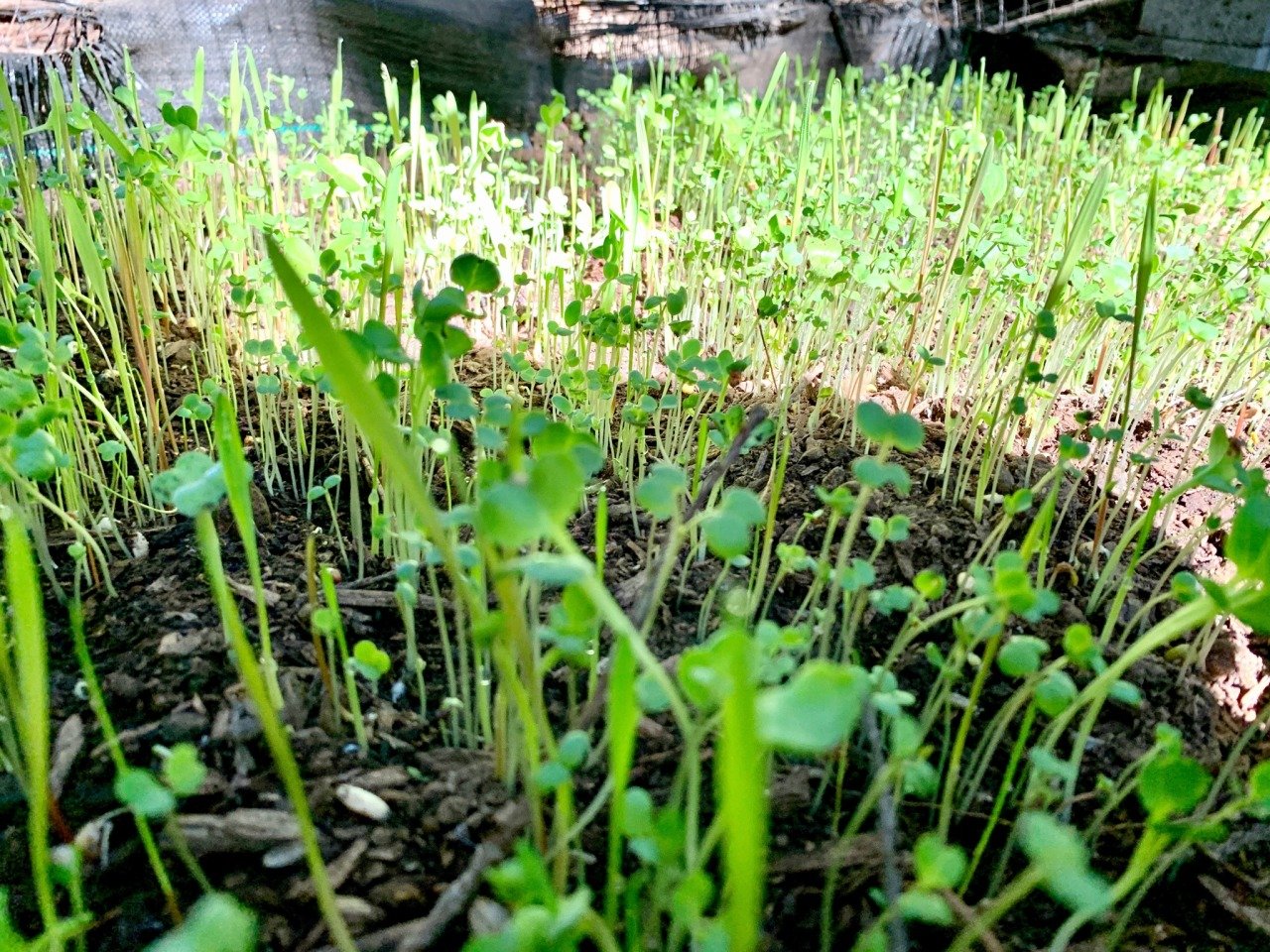 however, i did end up replacing the garden beds with deeper, thicker, felt raised beds and big ol' planters since the chickens managed to destroy the last set of raised beds made out of weed guard. 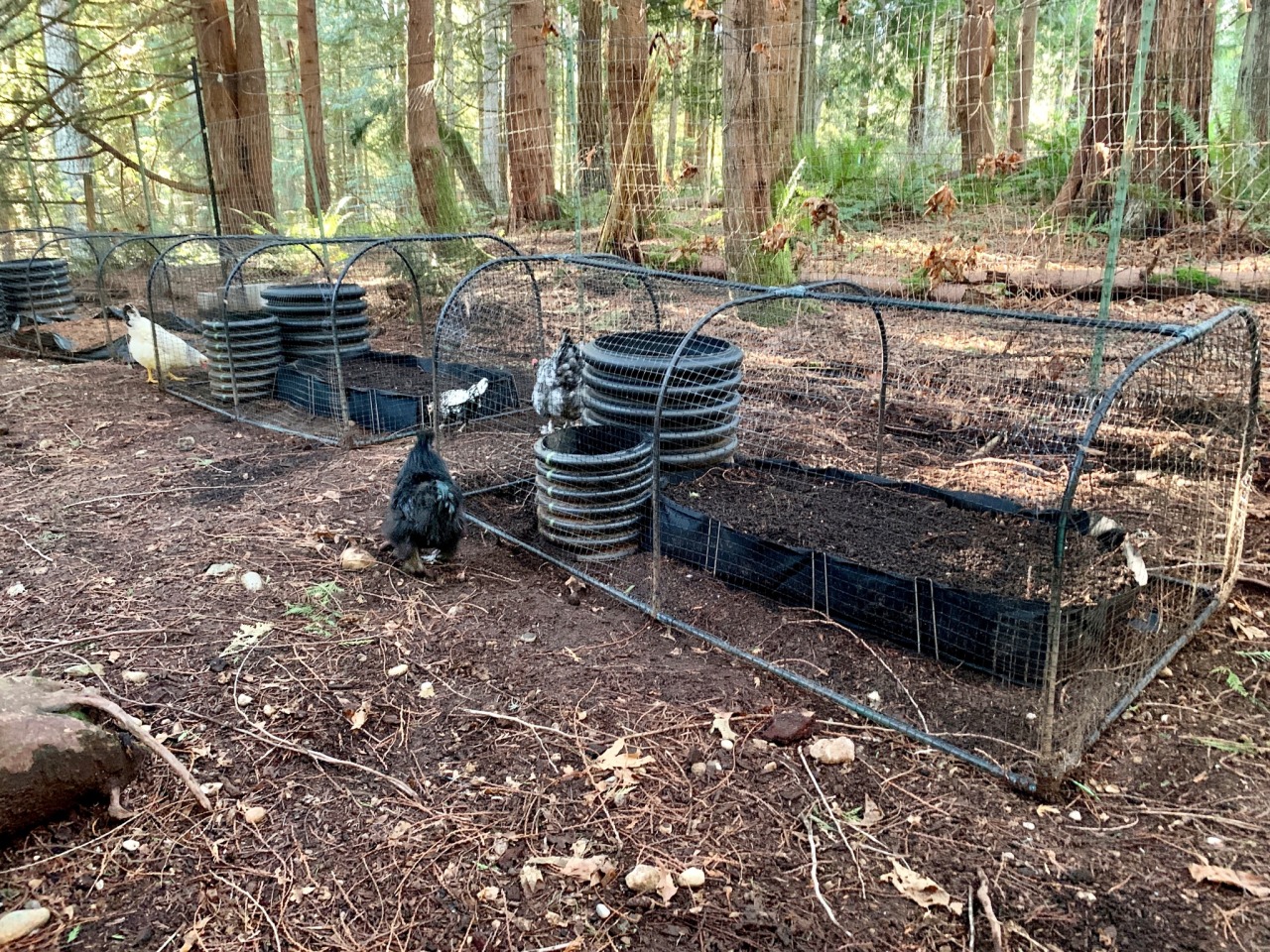 i also switched our feeder over to a treadle feeder that holds 50# of feed and upgraded our waterers: 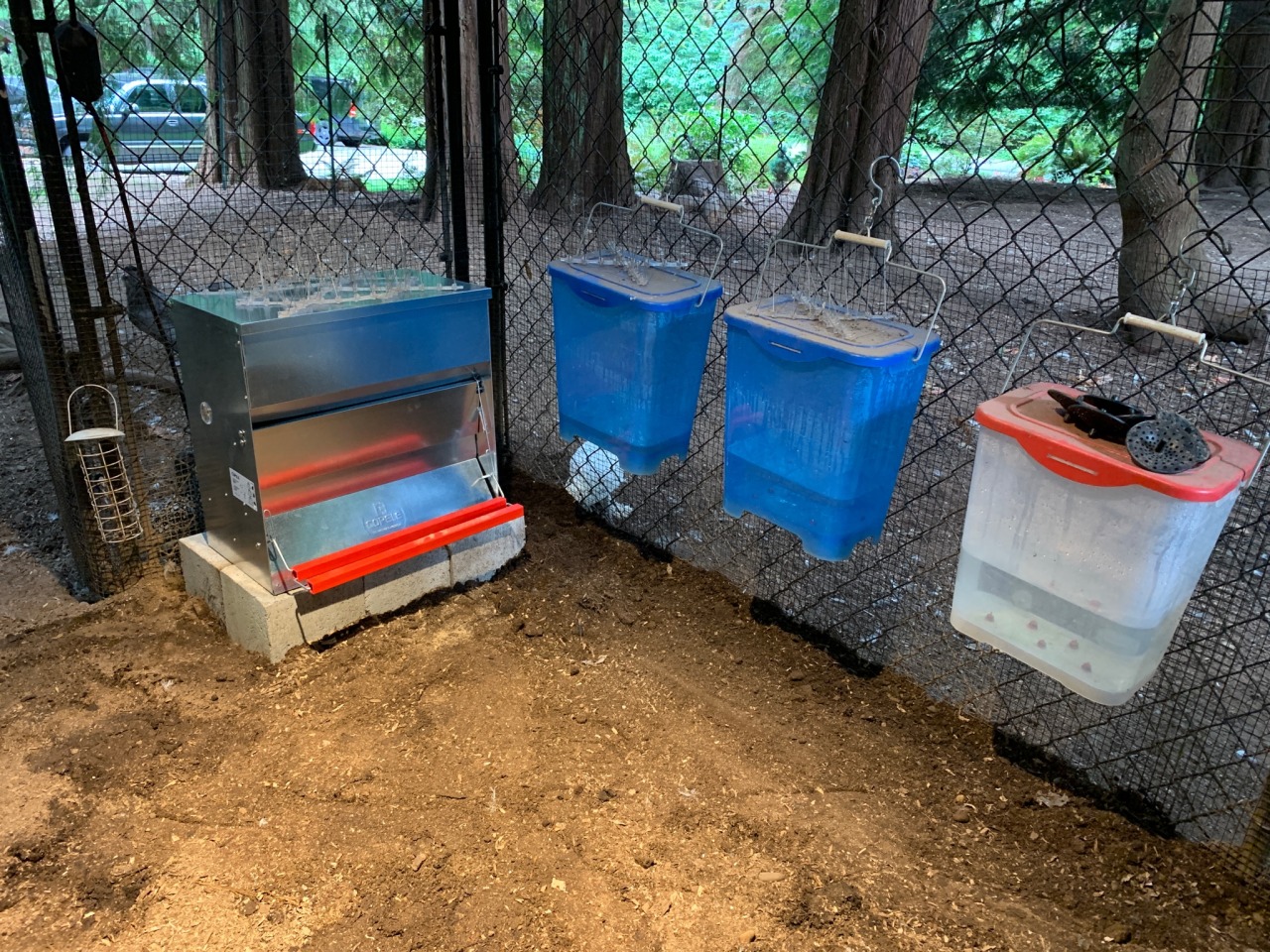 no more rats raiding the feed! i have cameras pointed at the inner enclosure and can vouch the treadle feeder is doing it's job keeping the chickens fed and the pillagers out.

That's the one I want.
We don't have the ladies yet (much less a coop, but we're working on it)

A rat chewed through the waterline of our dishwasher last year. Good news, we got an upgraded floor!

First big clean out. Is there an easier way in the future?
2 3 4