Out to the coop - how do I transition my dramarrific pullet?

Hi all. My three girls (we hope!) are about 6.5 weeks now and have almost all their feathers (still working on a few under the armpits). We've got days in the 70s and 80s now, and mostly nights in the 60s. The next two nights will be down in the lower 50s.

They've been outside in a run all day long for about a week and a half. And the herding process back to the brooder is getting more fraught by the day. They have a little roosting post, and they're now basically as tall as the brooder lid when they stand on it. They are clearly ready to move on to bigger digs.

I'm planning on doing the lock-in method for a couple days so that they get used to the coop. Two of the chickens are great - pretty adaptable and my RIR, in particular, is very easygoing. However, I have an olive egger that is... a drama queen. She is absolutely beautiful, but very precious. Has 100% been like this since we got her at two days old. (Her mom is an Ameraucana and her dad is a Cookoo Maran if that info is useful).

She yells if you pick her up. She yells if she's put first or last into the run because she's lonely. She yells when the sun is setting. She yells if it drizzles. She likes to kind of do her own thing while the other two pal around together, but she yells if they get out of sight. They come running back because they are good girls, and she proceeds to ignore them again. She will roost with the other two, but seems largely to prefer to rest in the shavings. In any patch of sunlight, she flops over immediately. She likes to walk around holding her wings out like she is showing you how very pretty they are.

I took them off the heat about a week ago. She's fine in terms of temp - in fact, she's the first to get hot and start panting if things are too warm - but she, you guessed it, yelled that the light was gone and the garage was dark. I've had to hook up an orange non-heat bulb to get her to stop screaming when she goes in for the night (the other two seemed fine in the dark - but it was pretty dark in there in her defense). Last night, she freaked out about something, and I reached in and just pet her back for a while. She's never let me do that before - usually she screams when touched unexpectedly - but it seemed to calm her.

Basically, I am dreading the transition to the coop. I can just imagine her in there, pounding her tiny pullet fists on the window over this latest indignity. I would also like her to adjust to slightly less pampering.

We live in a city, so there will be more ambient light in the coop than there is in the garage with the light off, so I'm not inclined to provide any more lighting (we'd have to run a cord across a major walkway in the yard).

So my questions are:
1. Temps have been pretty high over the last week, so it's been about 70-80 in the brooder at night even with the heat lamp off. Is transitioning to a coop with lows in the lower 50s going to be too radical a change? If so, what temps would be safer?

2. Anyone have any tips/tricks for a fussy pullet that might help her transition out to the new setting? She's a very sweet girl, but I've been afraid before that she's going to give herself a heart attack over situations she finds distressing, while the other two just kind of look at her and keep peeping and pecking.

3. Do chickens get annoyed at each other about stuff like this? She's driving me up the wall sometimes, but the other two seem pretty unfussed by it. But I know my BR is *not* going to like three days without access to the yard (she's the bossiest and top of the pecking order), so should I be worried about the OE being attacked if she won't chill out?

4. Anything else I'm missing before the big move?

Attaching pics for reading this far - and because we're both vain about her pretty feathers, if I'm being honest.

I agree. She's quite a diva.

You shouldn't have any worry about temps since the three are well feathered. The transition will likely upset them all, but transition is something all chickens have a big problem with. It's our job to make it easier for them so we don't have to endure all the complaining.

In addition to the things you're already planning for their move, the one single thing I've discovered that actually makes chicks happy about the move is a cat bed to sleep in. I've transitioned many groups of chicks in this manner, and all take to it with almost immediate enthusiasm. It provides a degree of warmth and security with "plush". In case you aren't aware of it, chickens adore plush "furniture" to lounge and nap on.

Using a cat bed as a transition between brooder and roosting also has the additional advantage of eliminating the danger of the chicks picking up the bad habit of sleeping in a nest box. 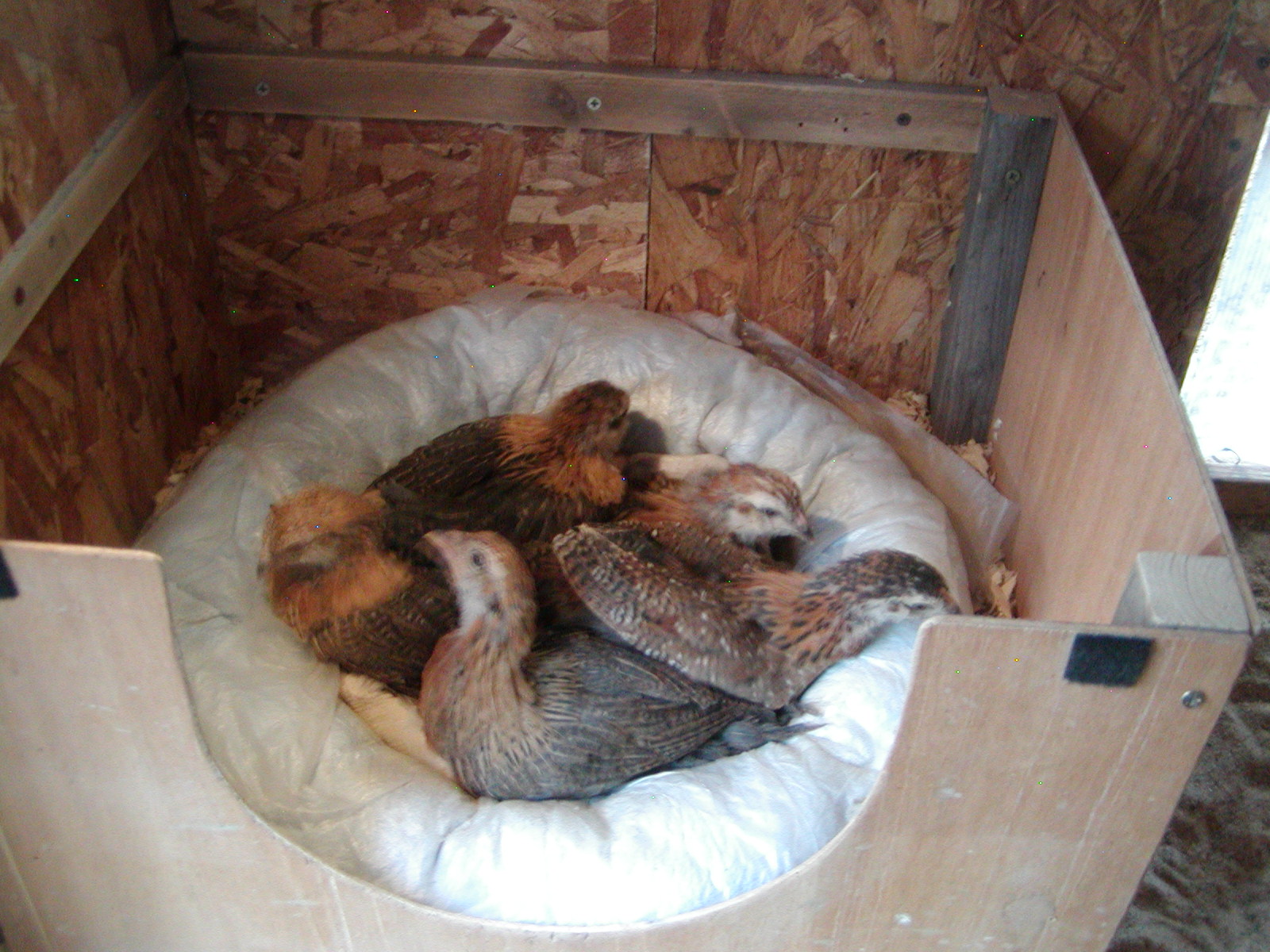 Thanks! This is perfect, we have a cat bed none of the cats would ever deign to use.

(We are extremely outnumbered over here!)

Thanks for the advice.

Just wanted to follow up. As expected the olive egger found the move 'just too much to bear'. But she made it, despite her misgivings. There's a big window on the side, so everyone was looking at me pretty shocked that I'd put them in chicken jail.

We put them in mid-day to give them the experience of sundown in the coop and did the lockin for just under 48 hours. They totally ignored the cat bed - perhaps because a cat has been in it once or twice. I took that out after the first day since they seemed like they'd prefer more space to dig around. They don't know what's good for them.

We've put them in when it's time to go to bed a couple times this week. Last night, I was busy, so my partner went out when the olive egger started yelling about nighttime approaching. She followed him to the coop - he opened the door (we are still waiting on parts the proper coop door, so it's not self-serve yet) and they jumped in.

Obviously, they are the smartest chickens in the whole world. We are very proud of them - even the olive egger (who put out a whole bunch of showy new feathers in the less than two days she was locked in the coop).

This method definitely worked for us, and was pretty drama-free despite my fussy pullet. They've adjusted to the lack of light, changing temps, and new digs just fine. Thanks for the advice!

She sounds like a special bird! When she holds her wings away from her body, it means she’s hot.

I'm sure that's the 100% case (she seems to get overheated the quickest). But I would also put actual dollars on her just showing off.

J
Should runt go out to coop?
2

No feathers at 4 weeks