Peachick question, momma died, how to integrate and sex also?

I have a peachick that my Turken hatched on July 10th of this year. When it was almost time to take the 2 of them and let them back in the group so Turken could teach the pea how to interact, Turken got a dislocated hip probably from the pea accidentally jumping on her so I had to put her in a crate next to the pea. I took her to the vet on 9/14 and he popped it back in but don't know it stayed and she had to have crate rest so she was in the next crate to the pea so they could still see each other as they were so very close.

A few weeks later (Sept 30th) I went in to see why the pea was crying and her momma Turken had died. Boy did I cry with her, Turken was a proven momma and one of my favorites too. I will probably name the pea Turkey in honor of Turken as that was her nickname. She (I think since someone who used to raised peas said maybe a girl, will get more recent picture maybe tomorrow) cries a lot and I hold her for awhile. WHen can I start putting her in with another group. IF it is a girl I would put with my white peacock who was a year old on July 13th so a year apart but I noticed that sometimes my araucana roosters chase him and don't want them bothering her. 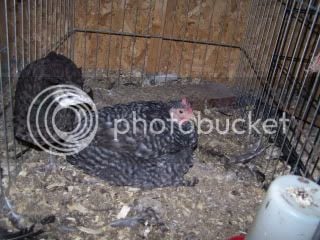 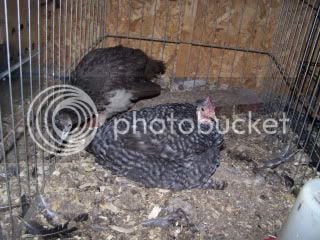 These pictures were taken on September 14th before vet and Sept 15th the next day so the pea was 2 months and is now 3 months old. 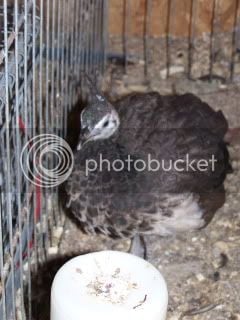 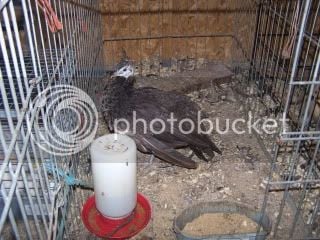 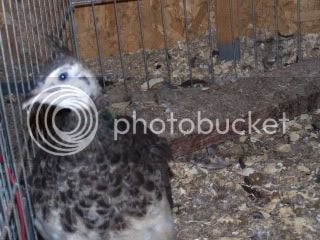 Advise on what sex and also on what to do and when to do it as in socialize with other birds, I don;t want her to free range since I am afraid to loose her since I live on the edge of the woods so would put her in coop with white pea if a girl unless you think 2 males would get on. The other pair that are the parents live with 11 chickens in a coop and run also. The actual parents are my blue pied hen and my india blue white eyed peacock so what color do you think the pea is?

Thanks so much it just breaks my heart that this happened. They were so tight.

I'm so sorry for your loss of Turken; a good mama hen is worth her weight in gold.
I don't have any answers as to the socialization of your lone peachick, but I know the more experienced members here will have some advice for you.

Thanks so much for your kind words.

Yes good mother hens are worth their weight in gold. Here's Wanda(someone named her that because she's so perfect): On to your questions, while peachicks bond very strongly to their mothers for a year, your peachick is old enough to eventually be all right by herself. She(yes it's a female) will cry for a few days but eventually she will 'get used to it'. Would have been easier if she had brood-mates, but can't always have everything perfect all the time. You can keep entertaining her, or perhaps put a large mirror by her cage for something to be with her all the time.

I love those pictures Kev!!! I had asked here about adding another chicken egg ready to hatch and someone said she would prabably have her hands full with the pea. How old are your peas in the picture, you gotta love Wanda!

I don't agree, she would have been fine with one peachick and one or 2 chicks. Just generally not a great idea to do something like 10 chicks and one peachick, but even that is very possible- have done that before too, would not do that again though. In fact I would worry about the peachick as chicks are usually so tough, pushy and grow faster than peachicks.. could end up hogging most of the food and the best sleeping spots under the hen...

Been through a single peachick before... never again.....

(was incubator hatched so I had to raise it myself.. man that was one very demanding baby! I was worn out after several weeks.. To be fair, he grew up to be a very very sweet white peacock. Like in Phage's utterly charming pictures in other thread)

Well now I know for next time that my instincts were right I was only going to put one or 2 eggs in with her peachick. This was the first pea egg laid this year and the only one that hatched.

We all learn some things the hard way- see my note about single peachick..

Forgot to answer peachick ages, don't remember exact ages plus some had age difference of days and 2 weeks for one white(that's why one white seems smaller.. it's just much younger). General age in first pic probably 3 or 4 weeks, 2 months in second, give or take a couple weeks.

How old to free range peachicks?
2