I posted about my Roo earlier on in the week, this is what i posted -

I have a year old silkie boy. I found him standing with his tail down and a wee bit lethargic but not too bad.
There were no obvious outward symptoms, vent area clean, no runny eyes or nose. In the morning he still crows his little heart out and if i give him 'treats' he shouts on his ladies!
I separated him from his 2 silkie ladies and two 6 week old chicks and started him on Baytril (I live in Scotland so antibiotics are going to be different) He is still eating and drinking and I have been giving him bruised barley, oats, mixed corn and layers mash. As an extra he has had some cooked egg and also grated apple.
The only thing that i can find that is different is his poop. It is a pale shade of green, not running or anything, it looks normal its just the colour thats different! His breathing sounded a wee bit crackly but only if i stuck my ear up to him!
Any ideas??

I now have a picture of said Poop but to be honest the camera doesn't do it justice! It is much more fluorescent in real life!! Maybe though someone might know why it is this colour, could it be the antibiotics? 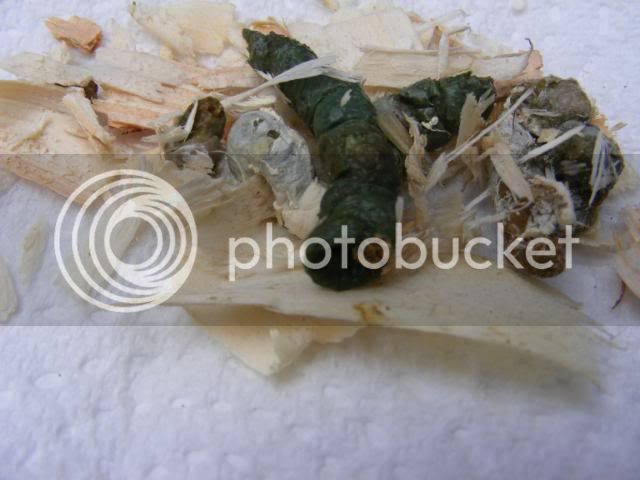 This is what some of our chicken poop looks like after they've had their 'yard time'. It's from eating grass. Not to worry,..it's totally normal. I was worried as well when I first saw it, but it made sense once I found out it was from all the grass they were eating. LOL!

Here is a link of the poo chart. You may want to book mark it for future reference.

I have already looked at the poo chart and there is nothing resembling the colour.
And it can't be grass as he has been inside for the past 7 days!

how long have you been seeing the green droppings? if it's been a day, I guess it's fine but if it continues after a long time...then you should be concerned.
Is he drinking enough water? Usually i see this poop after my chickens have eaten grass or plants, but strange...your chicken hasn't been outside for a while.

It has been about a week, but he is eating and drinking normally and seems fine in himself. I am going to stop the antibiotics to see if that is what is making them green but otherwise i might have to take him to the vet it just seems wierd that he isn't ill in any other way!!