1 year old jersey black. She prolapsed something 36 hrs ago. We push it back in but keeps prolapsing. Oviduct? The question is what is covering it? Feces? Very hard to pull off. She is separated, kept in darkness until 10am, quiet and with limited protein to reduce egg laying. Laid a very soft egg this am. Any idea what is going on and how to remedy it? 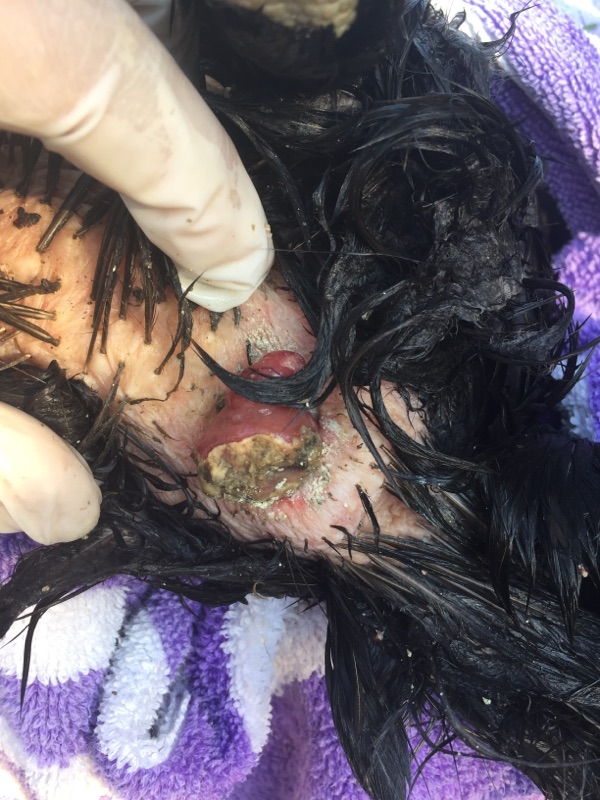 I had a similar situation when I had a hen prolapse a few months ago. I believe what you are seeing is damaged tissue. We eventually culled our hen because she kept pushing it out after 5 days. Some say soaking helps, as well as pushing it in, but I didn't have such luck.

the tissue that is sticking out is very much infected , that could have been caused by just anything , outside there are flies and where is the hottest safest spot on a chicken to hide if you're a fly ? right ! but what to do about it ? first of all : NEVER push a prolapse just back , that information goes all around the internet and if I ever found out who wrote such things I'll be giving that one strongly my toughts on it . NO do not psh any prolapse back , reason why not : first of all the chicken's inside is not in the form of what you see outside , it has to be massaged in , meaning in circles massaging it while gently putting pressure to get it back in place , if you just put it in , it will always come out again because it doesn't '' fit in '' , the prolapse is just going to be stuck inside for a while still not touching the sides it has to touch to be in the good place , once good in place the more chances of regaining health BUT it is in this case not even possible due the damage to get it back in , you'd do more harm than good and you can easily kill the chcicken due the high amount of infection that will spread to the other organs , in the mild case you could have her survive once such infection occored but she will most likely not be able to lay again . You need a vet on this or you need to cull her .
How you can reduce the infection : 1. rinse with water only first ( not warm ) , try to pull of as much as possible of the ' stickyness ' with a washingglove , a washingglove has the benefit it is soft yet not flat and the stuff gets off more affective , secondly you will need some bandage , you can take the bandage to keep the prolapse previnting to get worse , make a whole in it ! in case she needs to poop she doesn't have to walk around with a dirtier bum that even causes more bacteria , third go to your vet or give that one a call , it is not entirely safe to do such prolapse on your own but you can use a cream that is used to desinfect eye-issues , the very first antibiotics for a chicken since the (i'm not sure when but I believe the 70's ) called terramycine , make sure you do not get some of that right into her vent , only the tissue ( this gets used by vets but also by doctors for other cases rather than eyeinfections , gets used for even intimite areas so it should be safe tough ) I personally have treated a chicken with a prolapse not as big as this one caused by an egg she layed , putting too much pressure , if kept clean you will normally be able to get it fixed but I still say that this is a case for the vet given the condition of the bacteria on it , chances are too big there is a lot of tissue that has to be removed and the prolapse will get brought back in when stitched afterwords . Hope she gets better . Much of luck wished !

I would do daily soaks with warm soapy water or Epsom salts, and do some scrubbing of the discolored tissue with a cloth to try to get it bleeding a little. This is called debriding the wound, where you scrub off the dead or damaged tissue to help promote healthy working tissue. It can be common for a prolapsed cloaca to keep coming out for days. Honey or Preparation H applied can help to reduce swelling. Sometimes more internal tissue of intestine or oviduct can come out, where the hen would need to be culled. Prolapses can recur, and damaged tissue may not work properly.

F
Overcame prolapse 6 months ago, but having new problems