I have a rant that I need to get off my chest and maybe many of you have seen this before...I don't know. Anyways, I am not trying to ruffle any feathers at all, so please, do not take any of what I am saying to offense! Lets try to keep this positive and not trying to start a controversy here! This is simply my opinion backed by facts that I hope some of you at least will gain something from, that's all! If you don't agree, please don't post. If I have misrepresented something, let me know! I am very open minded and that is why I am writing the following:

So here is my two cents on the topic! You could call me a "snake lover" of sorts. They are VERY helpful at removing chipmunks and mice around my place. Venomous and Non-Venomous are welcome equally! I have done my best to seal areas they can squeeze through easily on my coop. I also have a low hot wire they must cross to get to the coop as well! I have MANY snakes around and zero problems! I primarily have black rat snakes, copperheads, timber rattlesnakes, garters, ring-necks, milk-snakes and they all serve a purpose and live different niches on and around my property. Take a moment to educate yourself about the snakes in your area and realize they are just living out a niche that nature has created. People who are formally educated about snakes such as myself do not kill them. Also, one note about relocation efforts....10 miles is a little drastic!
Seriously, some poor college student working on a genetics thesis would hate you for that!! It is more common than you think for students to be doing that kind of work in many places. Once you move such an animal a considerable distance, you have just contaminated the genetic pool in the area! Also, some species have specific traditional winter den sites and once moved the snakes will perish the following winter when they cannot find their dens! Most people don't realize this!
I simply believe that conservation, education, and understanding should be considered. Fear of snakes is actually natural and for good reason, just respect them and if absolutely necessary, move them only a short distance away such as .25 - 1 mile is adequate to keep them away.

It really frustrates me to read "The only good____ is a dead _____". Really? Think about that statement and the gravity it holds. Then educate yourself about the niche that particular animal fills. Consider what it eats and it's purpose on any given day other than when it crossed your path. Unless the species is invasive, it has a good reason to exist where it is found. I would think that it is fair to assume that most people that hate snakes also hate mice, rats, chipmunks, and the like...correct? Some of those same people will kill the snakes and then poison the rodents and in many cases end up poisoning right on down the food chain!!! Just consider what you are doing when you do something. Just because it was how you've always done it or grew up with or learned does not make it the proper way to handle something. Every action has an equal and/or opposite reaction and our impacts are greater than we generally realize.

FYI... I hunt, fish, and provide well for myself from the forests around me. My chickens are part of my chosen way of life. I will kill IF NECESSARY anything that bothers my chickens or threatens in any other way. At one time in my area and in many places around the U.S. during the past century, had no forests! Many other habitats have been similarly destroyed or disrupted also! A great number of species were lost due to wanton disregard for their value and existence. Many of these snake species, other creatures, and plants have been making a long hard comeback over the years. I simply respect what mother nature has in place and do not tamper with anything more than I need to.

I totally agree. just because you are afraid of something does not give you a right to exterminate it either. Some situations can not be helped but killing anything just to kill it is just wrong. take for example any time a society has had the mentality of the only good ___ is a dead____. insert whatever you like.

The only good wolf is a dead wolf

the only good cat is a dead cat

the only good chicken is a dead chicken.

where would we stop it?

every good jew is a dead jew was the motto of many in hitlers reign. This way of thinking can be dangerous not only to wildlife but to freedom

Thank you for your message. I got to understand snakes from my husband. We took in a baby " copperhead" from friends, that was a corn snake. So many people misunderstand snakes, and misidentify .They are not evil. I leave them. My chickens are an introduced species here. Not the snakes. Animals have no voice. Thank you for speaking for them. The marsupial wolf, or thylacine( spelling?) was exterminated for being a live stock killer. A beautiful animal killed for its instincts. They could have built better fences.
Last edited: May 26, 2011

A 5' Rat Snake, laying in my nestbox, with a smile on its face....Dead.
A Water Mocassin, taking shelter, under some boards, 5' from my front door....Dead.

Quote:
Same here I have a few garter snakes and just black snakes but the cottonmouths and the canebrakes have been dealt with none of my neighbors kids will be bitten here and I use the mice for making bait for trapping season them and the rats are nonexistent here if there were snakes they would have to eat my birds so it kina works out huh

We are snake lovers here. WE have a black snake that lives up in some brush and under the shop near the horse pens. Also have a large rat snake that lives under the feed shed. I would whup some butt if anyone killed them. However, if it's venemous and gets caught near the house, it will be killed. Only happened one time in the 23 years we've lived here though. A HUGE rattle snake was out when it was pretty cold outside and was right by the house.

I can say in the 30 years i have owned this place i have not killed one snake and i see them just about every day,i have one 3 foot rat snake that loves to lay on my side porch steps.

I saw my first buttermilk racer trying to get my duck eggs in GP go nuts over a snake she wanted that snake gone from that area and so it was, he/she had to be pushing 6 foot and what a beauty he/she was and still is as he or she left the area and i removed the eggs and placed them under one of my broodies.

I know i loose some free range chicksand keets and some eggs but i do not have rats chewing my house up or the wires on my trucks,tractors and other equipment here and that is worth it to me to have them around.

Here is "Sneaky" tring to get away from the guineas and cat. 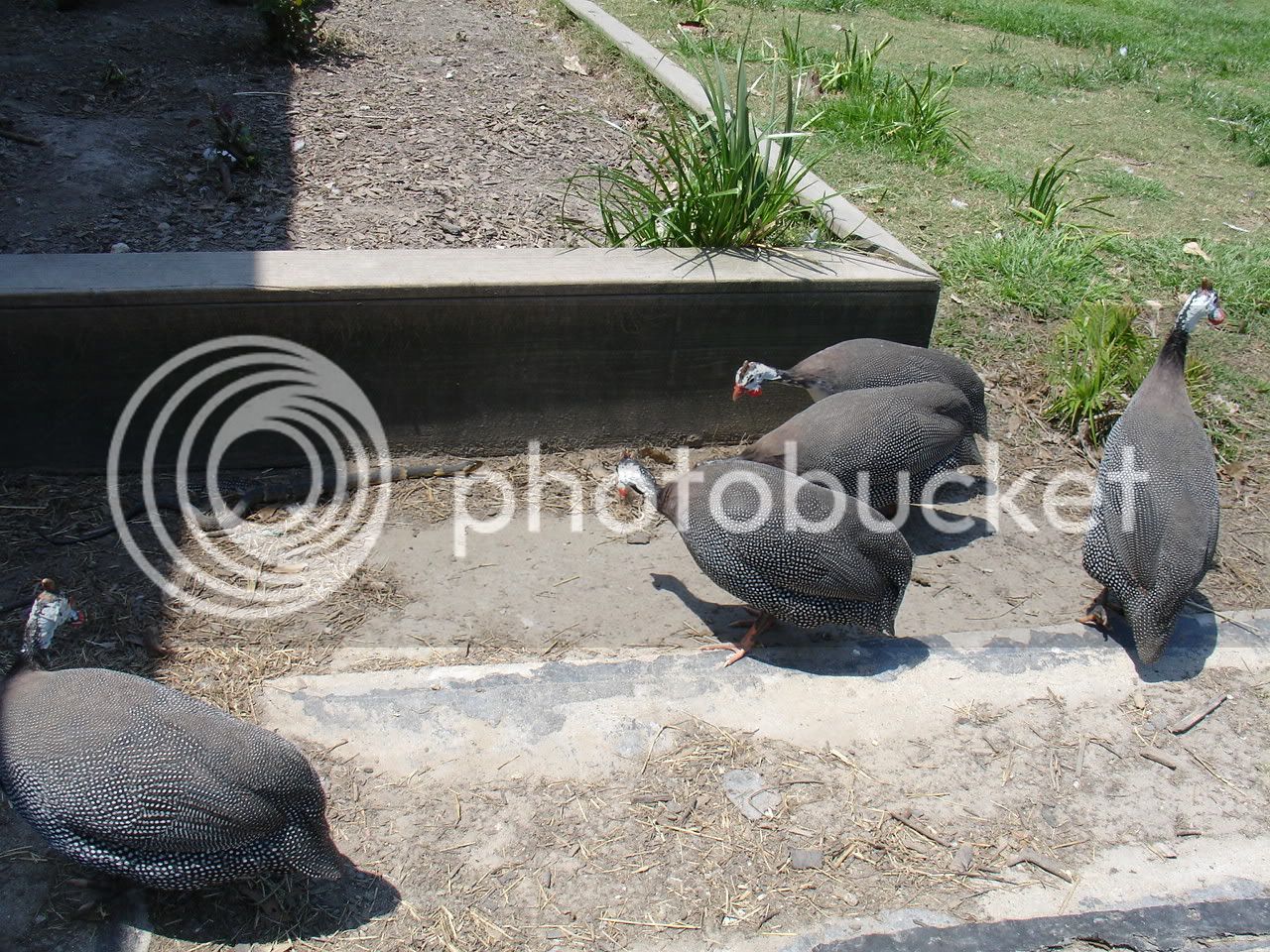 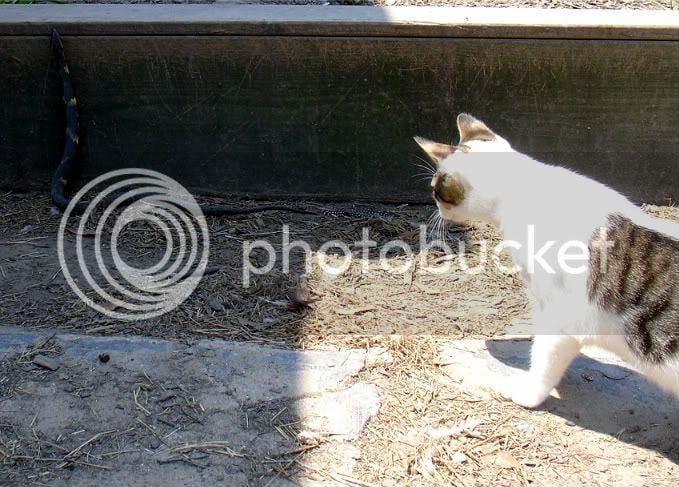 I am a biology teacher and I understand your post COMPLETELY!!!

We removed a snake last weekend from the coop. I went out to check on everyone and it came slithering out... More worried about my baby bantams than anything. Called my son out and her caught the snake (being bit in the process). luckily it was nonvenomous and we turned it loose about a 1/4 mile up the road and across the creek.... people over there have goats, etc but no chickies.

We will kill the venomous, but only because of the dogs, horses, kids, etc.

QUESTION... how would you personally snake proof your coop if it was a converted horse stall? I cannot put out the lime that people mention and cannot easily put up a small hot wire.

How to keep snakes away from coop?
2