I committed to some goslings from a local feed store, but thought they were going to be Toulouse. When I went in this week, the owner said they were African, which surprised me. My yearling American Buff's hatched out 12 goslings unexpectedly, so I'm not going to NEED to keep the goslings, but I did commit to them, so I'll probably have to take them . . . my question is -- what are they like compared to other geese?

I have American Buff geese, and they seem relatively calm and quiet (for geese that is) . . . they only set off a racket if there is some predator around, or if they think it is time for snacks, or if the ducks are indulging in X rated activities in the pond. They get along okay with chickens and ducks. .

The various reports I was able to get off the forum were that the African's were noisier by quite a lot than other geese, and more territorial . . . anyone have experience of multiple breeds?

I have one last broody goose who seems to be sitting on infertile eggs -- at least - I'm thinking she's about a week overdue for hatching. I'd love to give her the babies, but not if I'm going to have issues with noise. My neighbors are very patient and love watching the geese, but I think adding more vocal birds to the flock would not necessarily be a good idea . . . and the territorial thing worries me a bit. My current flock just stands and watches most people, even strangers, and sometimes they don't even put up a racket, which is okay with me!

This goose thing though, it is addicting. I made the mistake of looking on craigslist down by Seattle, and someone has blue and lavender American's . . . sigh. Good thing I don't have time for a Seattle trip right now!

From farms I've visited, the African geese were by far the noisiest birds I've ever experienced. I am no expert, but I would not be happy if I was expecting Toulouse and was told they are now African.

I myself have two buff dewlap Toulouse - and I wouldn't trade them in for 100 African Geese.

Yes, that is kind of what I read online . . . sigh. They are pretty birds, but I think I'll have to pass, or rehome them if the feedstore isn't able to find homes.

They are a small family run store, but they are just learning the business and I think it never occurred to them that a goose isn't just a goose. They didn't promise me a breed - just said they'd order geese, but didn't know what breed. I'm hoping they can find other homes, but I can keep them safe till I find a good place for them to go.

Hope you can get out of it! They seem very intimidating to me. The Toulouse is my favourite. Hope you can find some elsewhere if you really want them 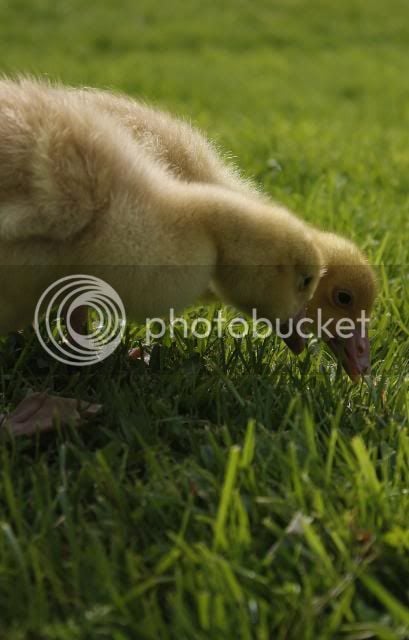 Mine have imprinted on me (or me on them - not sure how you would say that?) they follow me around like a mama goose.

Oh, those are cute goslings! Mine get to go outside today with their mommas for the first time -- I'm really looking forward to it. I would have preferred more Buffs, but I knew those were rare. I have one Toulouse goose that lost her mate, and was hoping that the goslings would be Toulouse for her -- but I think actually, that she'll love any goslings : ) She so badly wants a baby . . . maybe my last broody goose will hatch out one or two and she can share them . . .

The african's don't bother me size wise -- but my neighbors and family members are not bird people, and I don't want to add to any ill feelings -- especially since the neighbors have been great about the ducks / geese / chickens . . . I'm sure they will love seeing the goslings running around with their parents as well . . . I can hardly wait!

I have a male brown African Goose along with Embons (2 female) and Toulouse (pair). He lost his mate last fall due to a preditor

. My brown African's name is "Evil" - can you guess why? He is the nosiest out of all of them and the first one to "greet" anyone that comes in the yard. Right now they have babies and he is the BEST father you can ask for -he watches over the babies constantly. I think he is also the prettiest goose out of all of them and the most fun to watch. My husband wants to get more brown africans next year (I don't know about that). We aren't scared of geese at all and he knows to behave around our family. I wouldn't trade him for any other breed.

I have africans, utility toulouse, grey & buff dewlap toulouse. My africans are by far the loudest of the group. They are also the most hardy, athletic, and able to free-range 24/7 more safely from predators. They are extremely social and curious. They co-exist nicely with my horses and pretty much ignore the ducks (that are fenced in). I like that they sound an alert if there is something that does not belong in my horse pasture (stray dog, trespasser), but they are not cuddly pets like my dewlaps.

Thanks for all of the information -- they sound like wonderful personable birds -- but not quite right for my situation. I'll go in and talk to the feed store today and see what they say . . .

My Geese are nuts help

H
One Goose Isolating From the Flock