Pullet laying soft shelled/no shell eggs every day, how long is too long?

Hi there. I have a new pullet that has been laying soft shelled/no shelled eggs for 4 days in a row now, that I've seen. She looks like she's in pain, or at least not having a good time. I had a hen I had to put down for what I believe was a reproductive disorder & she acted the same way this pullet does. I watched her for about 45 mins last night, she stands with her head tucked & tail down. She gets up, sits down, gets up, sits down & has 'contractions' like she's going to lay. She usually just has her eyes closed & will not walk around even if I were to bring out treats. This is her in the middle of it, not a great pic but I didn't want to disturb her: 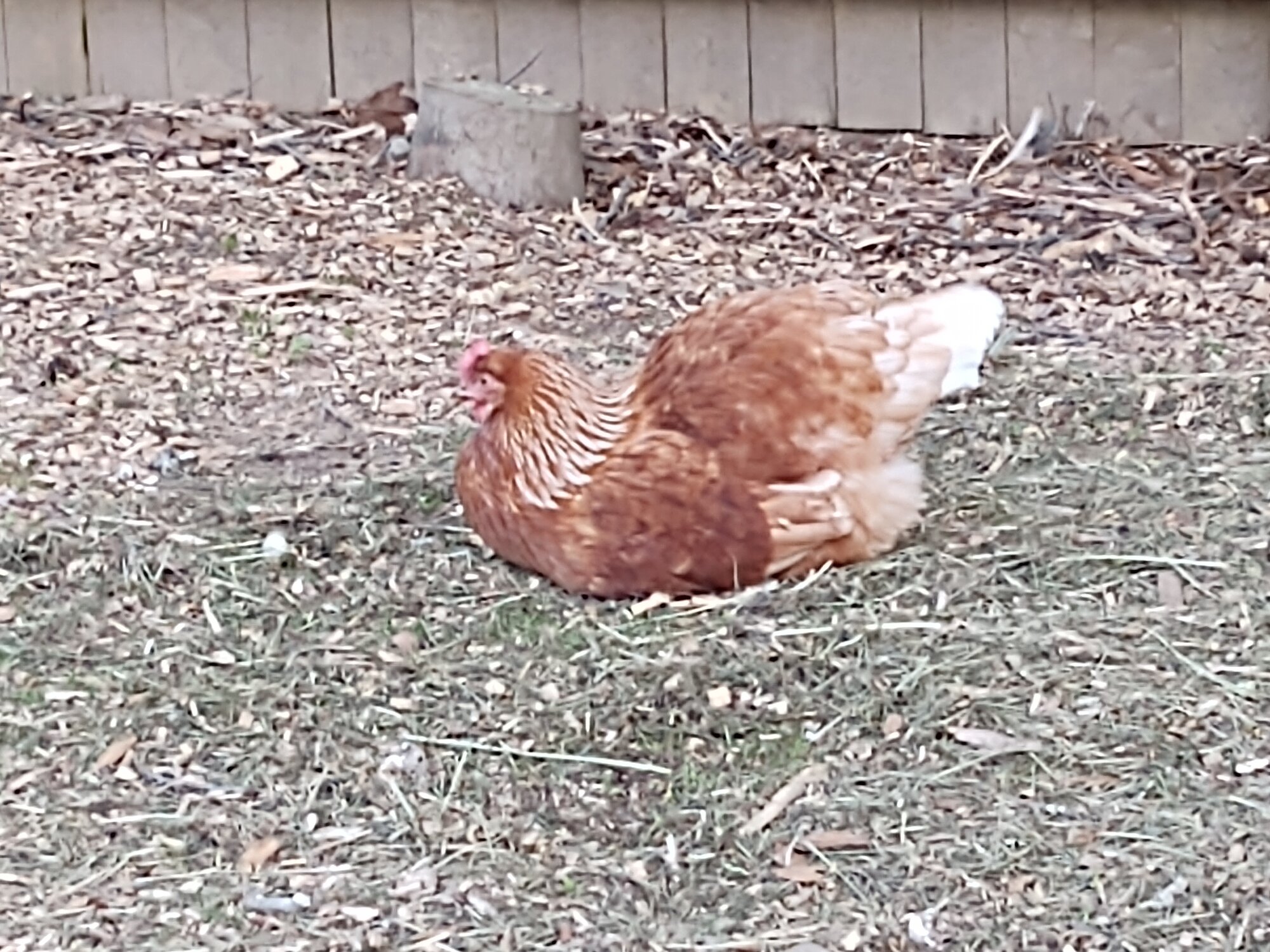 The past few nights I didn't see it happen, I only saw everyone eating egg but had never seen any bit of shell. Last night she didn't finish before she (barely) made it into the coop so I caught this pic in the coop this am. I does had a tiny bit of soft shell, but it mostly white & yolk.

I have noticed that she seems to mope around a bit during the day, off by herself a little. Not sure if its related or not but I have had my eye on her because of it, because the way she acts is a lot like the hen I had to cull.

So, anyway, my question really is will she work it out & how long do I give her? Is she in pain? I don't mind if she never lays an egg, I just can't let her go on if she's having a hard time, I don't want to torture her. Thoughts?

Sueby said:
I have a new pullet that has been laying soft shelled/no shelled eggs for 4 days in a row now, that I've seen.
Click to expand...

How long have you had this bird?
Was she laying OK before 4 days ago?
Or is she just a new layer?

Did you necrospy the bird that died?

A soft shell egg is hard to move down the pike, nothing hard for the contractions to work against, so they can act very weird while it's happening.

What all and how exactly are you feeding?
She may need some extra calcium.

She is a new layer, I've had them for about 5-6 weeks. 1 of the other 4 new pullets is laying fine, nothing from the other 2 yet. I did not necropsy the other bird.

That makes sense on it being hard to lay a soft shelled egg! Never thought of that.

They eat BlueSeal MultiFlock with 2 separate stations of oyster shell. I also feed them back their shells (not sure if that really helps with calcium or not). No real treats, a handful of scratch when I was trying to integrate them or teach them to go in the big girl coop.

Sueby said:
She is a new layer, I've had them for about 5-6 weeks. 1 of the other 4 new pullets is laying fine, nothing from the other 2 yet. I did not necropsy the other bird.
Click to expand...

Has she ever laid hard shelled egg?
Were they laying when you got them?
Was the deceased bird from the same place?

Sueby said:
They eat BlueSeal MultiFlock with 2 separate stations of oyster shell. I also feed them back their shells (not sure if that really helps with calcium or not). No real treats, a handful of scratch when I was trying to integrate them or teach them to go in the big girl coop.
Click to expand...

Egg Shell is fine, not as good as the OS tho. When I have ES I mix it with the OS.

Sueby said:
Can I give her tums (which I have) or should I go out & get something different?
Click to expand...

Tums can work. What I see most recommended is calcium citrate with Vit D-3.
They need the D to assimilate the calcium

No, she has never laid a hard shell egg - that I know of. None of them were laying when I got them at 17 weeks. 1 is laying now, good, hard shelled eggs & has been for 2 weeks.

Yes, they are from the same farm, a year younger than the other that died. They are a mix of a RIR male & a White Rock egg layer female.

So I got a half a 1000mg tums into her. I tired scrambled egg with it mixed in & she didn't want it, took 2 bites & that was it so I broke it in quarters & stuck it in her mouth. I'm 95% sure it was the right chicken, they all look a like, especially when they're separated! I happened to be lucky her sister was in the nest box so I'm feeling good about it. I banded her while I had her so I'll know now. I need to band the rest. I will have DH pick up some calcuim citrate just in case.

So yesterday went well, no egg at all from her & she looked good.

Today she struggled for almost 2 hours & laid a perfectly formed, but soft shelled egg. & Now shes just been sitting in the same spot, same position with her head & tail down, eyes closed looking like she feels awful for the past hour. I thought she'd feel better after she passed the soft shelled egg, but no such luck. I was hoping the calcium citrate d3 would get here today, hopefully tmrw cuz I don't know what to do for the poor thing. Any other ideas?

Might be something else going on....is her belly swollen?
Is it hot there? Other birds acting OK?

When I have a bird that is acting 'off' I isolate bird in a wire cage within the coop for a day or two....so I can closely monitor their intake of food and water, crop function(checking at night and in morning before providing more feed), and their poops. Feel their abdomen, from below vent to between legs, for squishy or hard swelling. Check for external parasites or any other abnormalities.

Best to put crate right in coop or run so bird is still 'with' the flock.
I like to use a fold-able wire dog crate (24"L x 18"W x 21"H) with smaller mesh(1x2) on bottom of crate under tray.
Then you can put tray underneath crate to better observe droppings without it being stepped in. If smaller mesh is carefully installed, tray can still be used inside crate.

I gave her a looking over tonight, she isn't swollen & no mites or anything, full crop. I watched her quite a bit today & she eats, drinks & chickens all day just fine - till it's time to lay (& apparently after). I checked her poop this am, I know where she roosted & it looks fine too. I'll check her crop in the am.

I went out & bought the calcium & gave her a half a tab. I'll see how she does tomorrow & then regroup I guess. I'd rather not separate her if I don't have to as I already have one in mean girl jail - I'd have to do some major chicken shuffling! But I will if she doesn't look ok.