Quail feed in my area

Easiest to find feed in my area seems to be the meatbird/grower bag from Orscheln's (link below). In the description it does say it is good for gamebirds and has 22% protein. Anyone use this with success? 40lbs for 12 or 13 is a lot nicer than the Manna pro for $6.50 per 5 lbs (at 24%).
live 30 miles away from a bigger town and I'm trying to be realistic on what happens when the feed gets low.

I know I would get faster growth rates with the Manna and maybe more eggs but cost benefit would seem the meatbird formula would win, as long as its a healthy choice.

My local stores don't carry quail feed, and the only type they'll order for me is starter medicated feed. Since I have older layers and do not want medicated feed, I feed my quail and my 4 chickens the Purina Flock Raiser. It's 20% protein (laying quail need less per many online articles I've read) and I give them free choice oyster shell on the side. I've never had an issue with the quail or chickens, and I've got quail that are 5 years old (and still laying) that have been on this plan the whole time I've had them.

I'd say the 22% would work fine for you. I looked at the link and didn't see anything that said medicated, but be careful of that since most starters have medicine that you don't want to give long-term to adult laying birds. Mine also get fresh veggies and occasional mealworms, so you could always supplement yours as well.
C

Thanks for the information. I will check the label to see if it is medicated next time in run in for chicken feed. what do you use as medicated feed when they are chicks? Do you switch to the adult feed at 3 weeks? 6? They do carry some 18% medicated chick starter that I use for my chicken chicks. not very much protein in that though. I guess supplement that with more protein to get it higher.

I hatched a group out last year and got a small bag of the 24% gamebird/showbird feed that you have linked, then around 5 weeks old started mixing in the Flock Raiser and converted them solely over to that. The showbird feed also isn't medicated, but the only other option at my feed store (or anything within a 40 mile radius) was the medicated chick starter that was only 18% protein or 50 pounds of the medicated quail starter feed that would have been a special order.

The medication is only to aid in the prevention of coccidiosis, and since I've got a closed flock I wasn't too worried about it. You could probably mix the chick feed with the showbird feed to get some medication and a decent amount of protein, and supplement with mealworms. I wish there were more quail feed options around, but it seems that I'm one of the rare people to raise them around here, or at least that wants to keep them alive more than 6 weeks.
C

Just doing my research before I get any chicks. Don't want to risk the investment. Going to see if that big sack of 22% is medicated or not. I guess thats the first step. Then like you say mix medicated with higher protein when chicks to get where everything needs to be.

I plan on keeping them for eggs mostly. If the processing of the extra males from the initial batch goes ok then I'll be buying an incubator and be the kind of person that only wants them alive for the 6 weeks or so. Except for the first generation of course. Will keep them around.
C

Love that Orscheln's is on my way home from work. Drive by it 4 times a day...
The 22% starter marketed for Gamebirds and meatbirds is not medicated. So if I mixed it 1:1 with the medicated chick starter that would get me some medication and bump the protein to 20% If I mix it with that smaller bag of the showbird feed I could get the average up to 21%. Honestly I think I'll just mix the 22% starter and 18% chick. Then switch to all 22% after the 5 weeks or so. Thanks for helping walk me through it. Now I'll have these two kinds of feed plus my normal 16% layer pellets for the big hens. Going to need to label some new buckets!

I know that a lot of people say it's important to feed birds specifically formulated food for birds. I agree that this is the textbook right way to do it. However,I will say that I have a hard time finding high protein poultry feed in my area so I feed my quail non-medicated 20% protein chick starter and supplement a bit more protein with ground up game-fish pellets. I have always had good results with this, and never any problems. 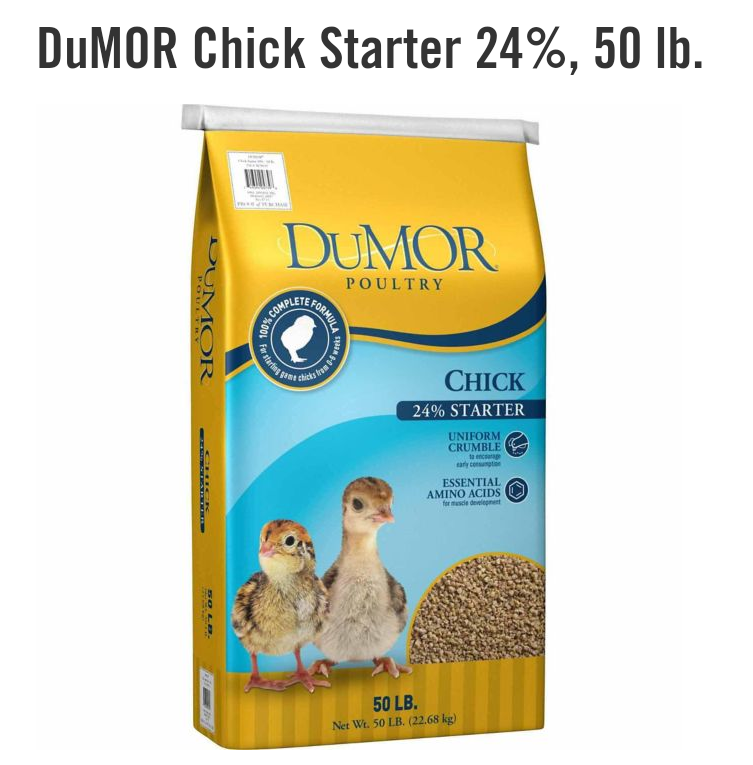 I feed this to all my quail of all ages. It is sold at tractor supply. They seem to do awesome on it.​

I feed this to all my quail of all ages. It is sold at tractor supply. They seem to do awesome on it.​
Click to expand...

Our TSC has this as well. I bought some and have been blending it with their current feed (a 22% chick starter, non-medicated). They are throwing so much of this blend, that I am wondering if they love the new or love the old one. They ate and didn't toss the 22% nearly as much as this 50/50 mix. This 24% definitely smells different than the 22% (different brand) that I had purchased at another feed store. I was so happy to see this at the TSC, but will have to determine if it is the one they like or not.

Baby Quail Feed -- Can someone look at what I'm feeding my baby quail and tell me if it's okay?

A
Would this feed work for 3 week old ducklings?

S
Just switched my five week old ducklings to alfalfa pellets to hopefully stop the progression of angel wing. Wondering if I need to add supplements?

save money on feed?