So today I got home from work early, and was starving so quickly got something to eat before heading home. At this point it got dark and I had not closed the chicken coop yet. As soon as I got home, I went to close the coop, and as soon as I stepped outside, I heard chickens clucking (which never happens when it's dark). So I grabbed a flashlight and ran to the coop making a lot of loud noises in case something was there..... there was, a raccoon. All my hens were outside the coop running around (I have 5) except one. After the coon was over the fence, I went inside the coop to find Geiser, one of my silkies, half torn apart. Almost all of her back was de-feathered and a lot of her tissue and fat deposits are exposed. Also her comb is almost completely sliced in half. She was not bleeding bad but was in shock. So I brought her in, washed her off, washed her in betadine, lathered her with some bacitracin, and also gave her an injectable antibiotic. I also gave her some sugar water which is supposed to help her out of shock faster. I hope she makes it through the night. She seems a little lethargic, but perked up after the water.

I can't help but feel guilty about this. If I had just gone home, or even went out there 3 minutes earlier, the raccoon may not have gotten to her. I just hope she makes it, all my chickens are like my dogs...

Here is Geezer as a baby 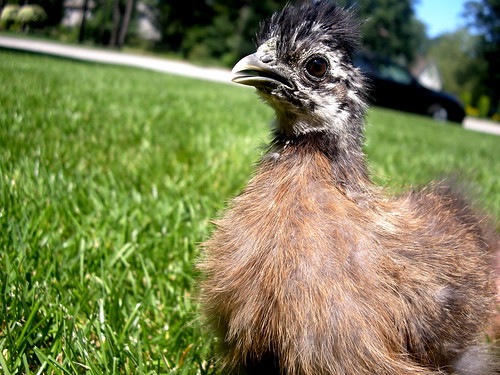 and her this previous summer 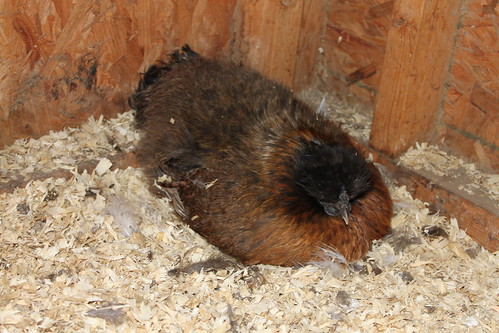 Should I trap and relocate the raccoon far away, or will he continue to return to the coop? Does anybody have any suggestions for me to help her heal?

It's not your fault. That is the way it is with predators. You can go on for months or maybe even years without problems, then all of the sudden. The best we can do is try to keep the pens a coops as predator proof as possible. Don't beat yourself up about it.

I have painted them to show the land owner when they returned it was the same one the pink paint they use to mark job sites works well I had relocated the coon 25-30 miles away as you drive it may have only been 12-15 miles walking straight fairly straight hwys though the problem with relocated animals is they usually die from lack of food and fighting with the animal that already occupies the territory where you release it that and you can spread disease by relocating distemper, rabies, parvo etc

Yea, I know what you mean. I've had chickens for almost 5 years and this is the first time this has ever happened. I'm gonna have to be really dilagent about closing the coop now!

Aprophet, what do you think I should do then? Should I trap it and sentence it to a territorial death match off my property? does anyone have any other suggesitons?

Quote:
I don,t do drama I just trap and dispatch, with coon there will normally be 3-4 family groups ( a family group will be 5-8 animals) in about a 4-5 square mile area this is where I live it is mostly marsh it is fairly food/prey rich after I get rid of these groups it takes 6-12 months for another bunch to move back in, the meat and the fur is utilized in this process.

Kill him! He's a thief. Nothing more, nothing less. Your job is to protect your flock.
So sorry this happened. I too come home after dark sometimes and lock the coop.
I'm starting to seriously consider getting one of those automatic coop door closers.

I don't even know how i would kill him! I am in a very close nit devlopement, so shooting would be out of the question. My father is an exterminator (but deals mainly with mice and bugs) so I'll ask him about it.

I only feel bad because it's not the raccoon's fault. He was just doing what comes naturally to him.

Quote:
Kill the coon Look at the post I posted about being defeated the last thing you or anyone else wants is a trap smart predator. I know it seems cruel But as everything is part of the eco system so are we IMO coons carry disease, plague, several different ticks and bugs that carry sicknesses not to mention there way over populated which leads me to believe theres more sick coons then there should be.

I had a similar thing happen to me a few nights ago. I waited too long to lock up. Luckily, I heard the ruckus and got there before there was any damage. I got the coon sort of trapped and hesitated about clubbing his head in because he looked at me sadly. My son and I were trying to think of a way to kill it...stab it, pour boiling water on it, beat him to death.....I was also afraid to get too close to him. I did not have a gun with me and I really should not shoot in the city.

However, coon was back last night to break into the green house to eat the chicken feed. He actually tore off some of the fiberglass siding. I heard it. My coop is built into the greenhouse but much more secure than the actual greenhouse( all wood). I was scared to go to sleep thinking if there was anyway for him to get to my chickens.....so, now I am mad and I am determined to catch him and dispatch. I have a 22 caliber and a high powered pellet gun. I am going to try the pellet gun first.

I am so sorry your chicken got hurt.

Raccoons are the worst!
2