Reflections ... on the Black Shoulder pattern.

KsKingBee said:
They are out of 75% Spaulding Black Shoulder cock that shows no white on him. The grandmother was a Low % BS hen carrying a white gene of some type. They produced four white hens three of which had some spots. The daughter was bred back to the father and produced the male chick above. This year all three hens will be put back with the father and the following year this cock chick will be over all three of the spotted sisters, one of which is his mother. This is also the same pen that produces my Red Buffs. 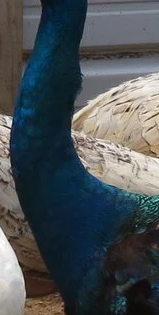 This is why amateurs use percentages, large breeders do not generally state a percentage because Spaulding does not breed true after the first breeding of 100% green to 100% blue. This is one of the first cocks I bought many years ago from Legg's Peafowl, he told me as a beginner to peafowl that percentage so I could understand that the bird was higher than mid-range but lower than a high percentage. Some will call this an 'Emerald', there are many names given to Spauldings but every Spaulding chick from every clutch can and will have varying amounts of Green genetics.

Breeders have different standards of what they call Spaulding, and there is really no set way to describe the varying characteristics we see in them. Some will say 'this one is 29/32 Spaulding', which makes as much sense as stating 2/32%, you can not tell the difference with numbers, only in what you see in the phenotype and that turns into what is held in the eye of the beholder.

So, in the case of the above cock, its parents would have produced 75% birds by the numbers, but clearly, it is either a bit higher or lower by the standards of whoever is looking at it.

What is the use of genetics ...?
So some birds have 75% gene green blood from muticus but do not express it ... they pass their turn ... it may be for the next generation! ... if we are lucky!

A
What color are these cochin bantams?
2 3