We haven't actually started this project yet, but I thought I'd give it its own thread.

I had this 4'x4' coop with it's attached, hardened run in the miniscule back yard of the house we just sold. Not knowing that there would be a massive shortage of hardware cloth 6 months later, my husband disposed of the run completely rather than attempt to salvage the wire off the deteriorated boards (the bottoms had rotted out where the deep-litter contacted them in this hot, humid climate). We did, however, move the coop to the new property. It needs some repairs before I can put chickens into it again.

I'll start with old photos of it's new-constructed glory. 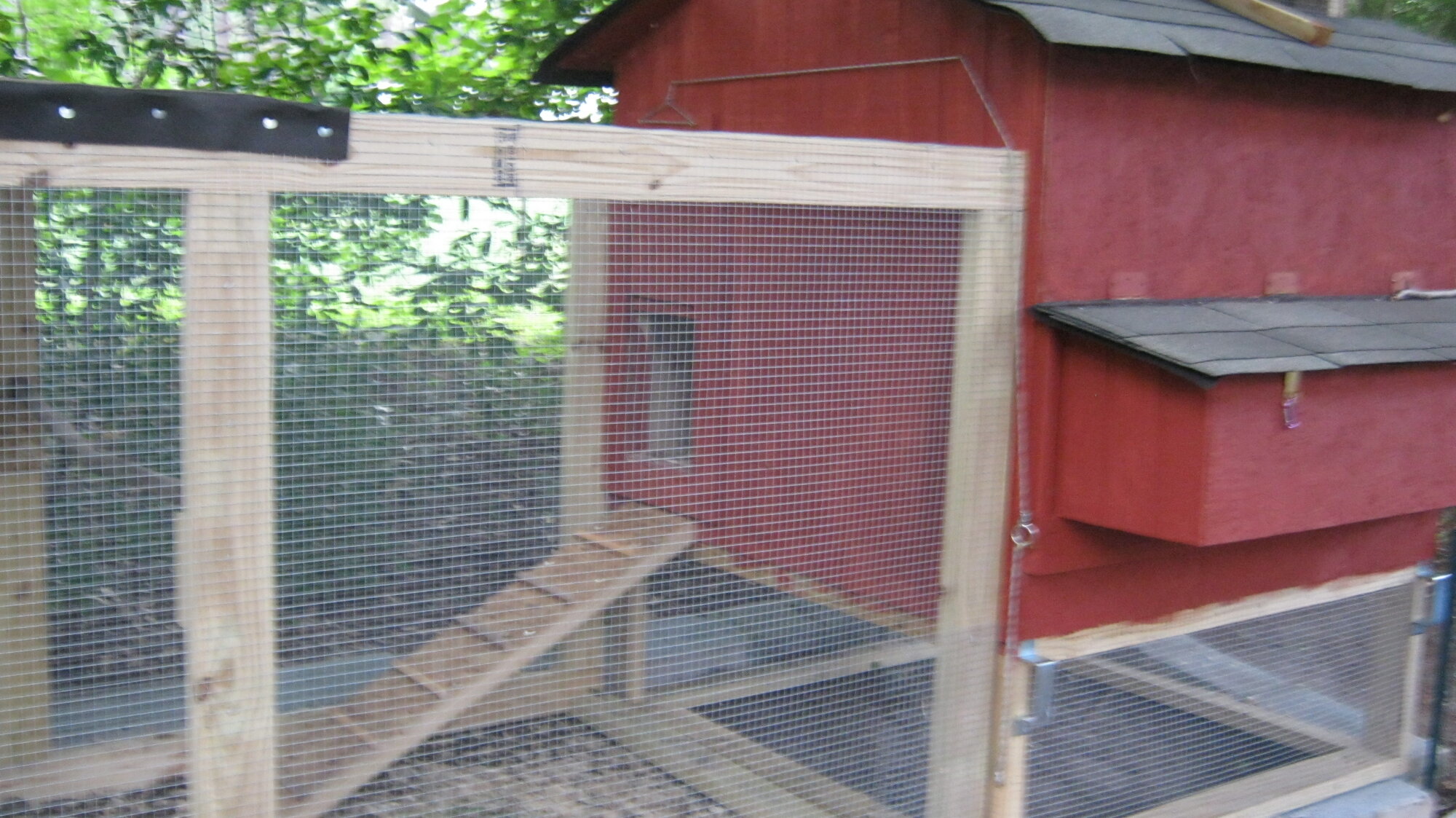 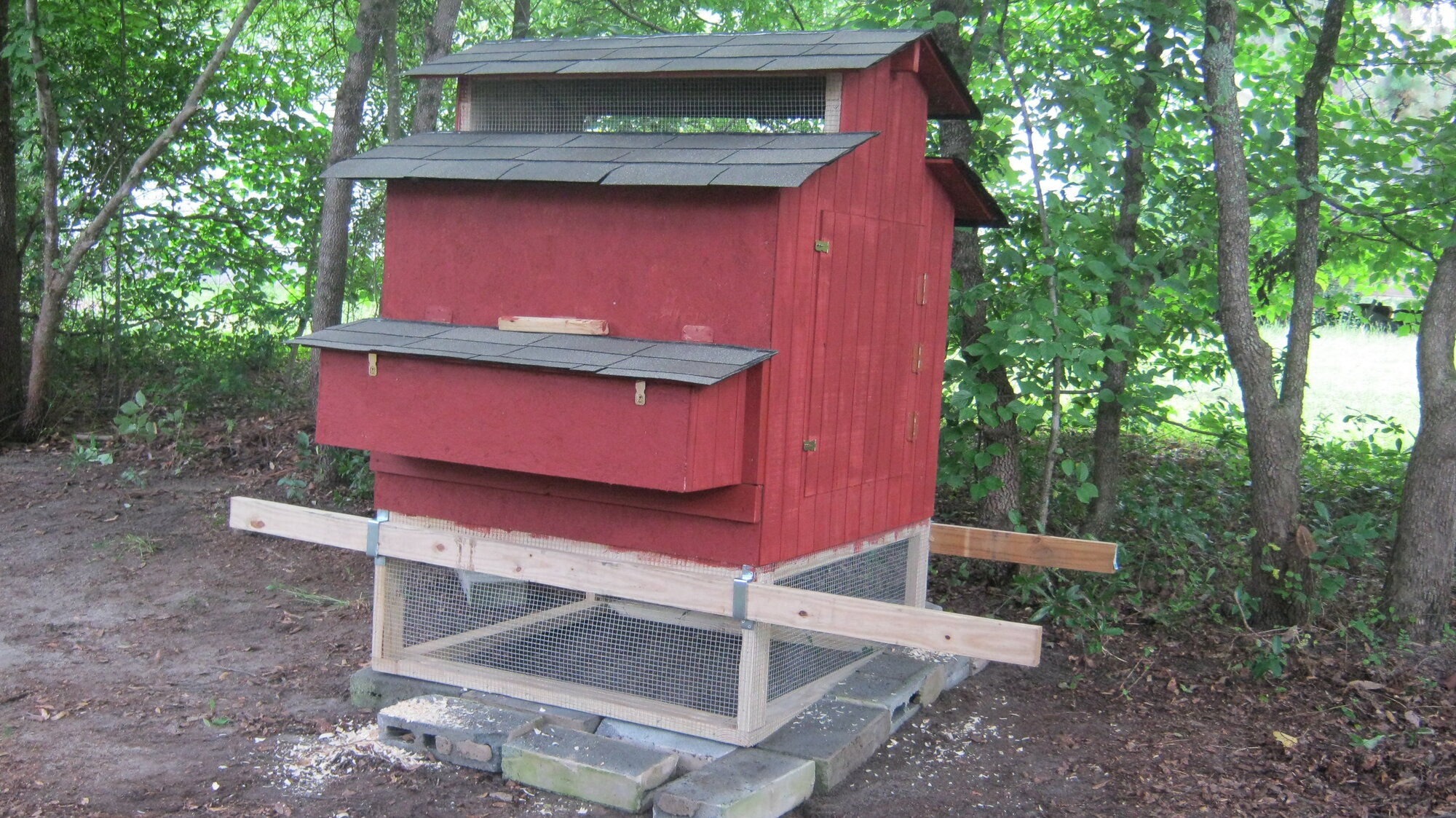 And the current condition: 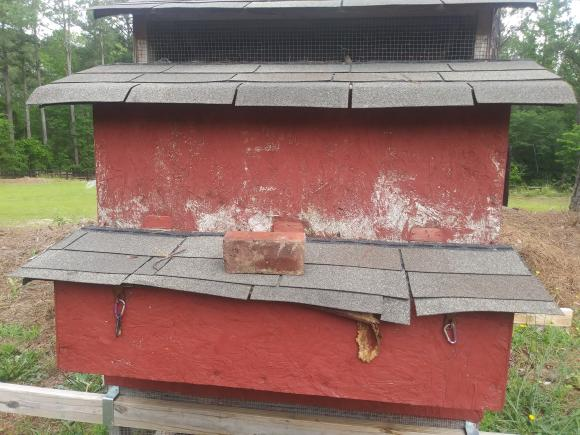 As you can see, the one OSB wall (due to a miscut of the T1-11 and the reluctance of DH to buy an entire new sheet), rotted out despite being painted and the roof has failed, particularly the roof over the nestbox. The roof failure is due to the tarpaper having degraded in the brutal conditions of 7 NC summers. The condition of the right side of the nestbox may have been a legacy of Hurricane Florence -- the coop was unoccupied at the time so evaluating it for damage from downed branches was not high on our priorities at the time.

Interior shots in a separate post, because the advantage of country property do not include high-speed internet.

Original condition, the day I brought the started chicks home (a friend with a brooder setup brooded them for me). 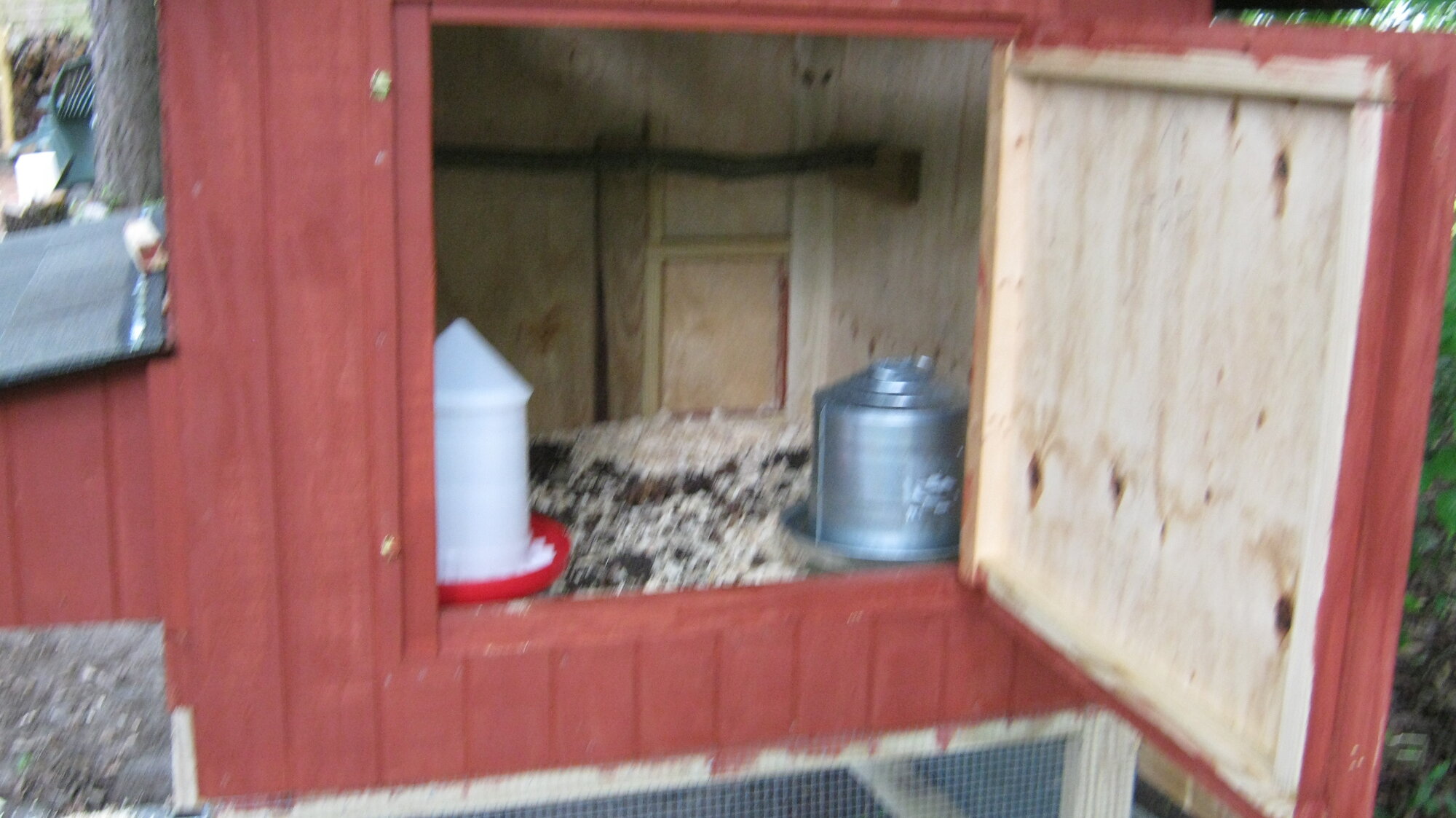 And current (brick for scale): 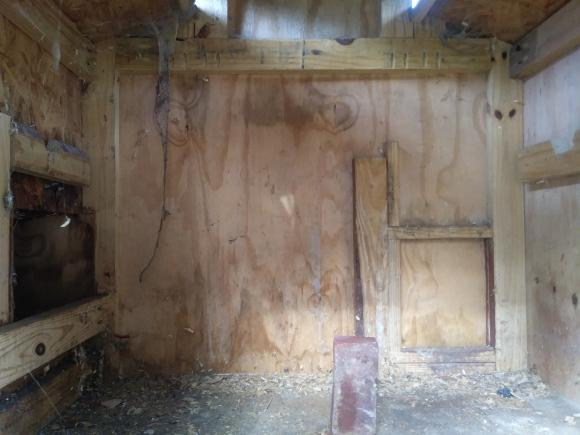 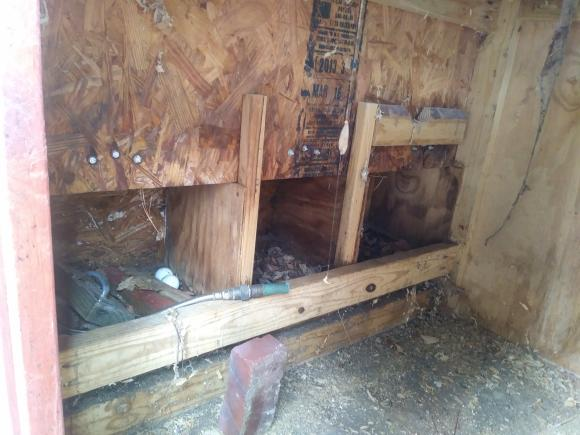 These pictures were taken, Sunday, immediately after a week of torrential rains that caused a lot of flooding. With the exception of the nestbox under the damaged roof portion, it's dry as a bone.

I did find time after Florence to open the door and see how it had fared and found it perfectly dry then as well.

OSB will fall apart it a humid climate. I don't care if it's painted or not. I don't even mess with the junk here in arkansas.

Things we did right:

I would heartily recommend a monitor roof for anyone in a hot climate. With the pop door open 24/7 except in dire emergencies and the coop located in deep shade it was never any warmer inside than the ambient air temperature outside and, as previously noted, no rain ever penetrated beyond the roof overhangs.

Nor was it hard to build for a competent handyman.

The structure is entirely sound, due to DH's family habit of over-engineering everything -- though it can be moved by 4 men with the carrying 2x4's in place (we knew we'd be moving to the country eventually). The skids need to be replaced, but that can be accomplished by putting it on blocks during the process.

It *is* portable, though not so light as to be moved without serious effort.

The nest boxes were a good size even for the Brahmas.

The roost was well-placed, above the nest boxes but below the open section of the roof.

The hardware cloth defeated the efforts of a predator -- unable to tear the wire loose it attempted to rip through and failed (we added a second layer over the entire area that was damaged).

It was not difficult to clean out since the large door allowed me to reach all portions of the coop with the manure fork even though I am too short to quite reach the far wall. When the residents retired the man helping me relocate them to the freezer was easily able to reach in and get hold of them without a rodeo. (I would not make a non-walk-in coop any deeper).

The far half of the run was roofed, so that I could keep the food and water out of the coop. The chickens were able to bask in the morning sun and had to get out of the coop for exercise in all weathers. (In a sunnier location the entire run should be roofed.

Things we did wrong:

Not using treated lumber for the ground-contact areas. DH was concerned about the effects of the preservatives used on the chickens' health. Better information about the modern wood treatments that replaced CCA wood has assured us that we can use it next time.

Too many nestboxes. The renovation will reduce them to two. We will replace the rightmost box with an additional vent window because in our new situation we will not be able to create a hardened run with 24/7 access right away. This vent will be under a roof overhang and have a cover that can be lowered during hurricanes and in our rare, truly cold weather.

4-foot run height. All future runs will be walk-in.

Use of inexpensive roofing materials. All future coop roofs will either be metal or will be constructed exactly as if they were on our own house. There's no savings in having to replace stuff.

Fit of pop door tracks too tight. DH's over-engineering strikes again. He had forgotten the warping effect of exposure to sun and moisture. (Funny thing, our oldest son is converting his carport to a bedroom and made the same error when cutting his floor joists -- making precise cuts then having to hammer them into place or trim them).

Roofed section of the run not slanted. Rain puddled on top, accelerating the deterioration of the inexpensive roofing materials.

The coop perch was only held by gravity and not otherwise secured because I thought that would make it easier to clean. The big Brahmas, particularly the rooster, periodically knocked it down. I liked the natural branch and the ability to remove it for cleaning but I have to figure out a means of securing it until I want it loose.
Last edited: Jun 3, 2020

I think if I was gonna use wood around the bottom like that in a deep litter I would look at the plastic decking boards (I forget the actual correct name).

CCA got a bad rap but I like it better than this ACQ crap. I worked too long at Hoover treated wood, dad retired from the place. I might know a lil or two about treated wood.

Our current plan is to repair/renovate this coop so as to get back into having chickens again ASAP, build a new, much larger coop after our house is in place, then use this coop as a broody facility/grow-out facility in the future.

Because it will have to be moved again after the house is in place we're going to forgo an attatched run with 24/7 access in favor of an electric net enclosure and locking them up at night.

neo71665 said:
I think if I was gonna use wood around the bottom like that in a deep litter I would look at the plastic decking boards (I forget the actual correct name).
Click to expand...

I thought that the plastic wood was for decking only and lacked sufficient strength for structural purposes?

We have considered block piers instead of wood for the later permanent installation.

neo71665 said:
Yeah I wouldn't build a house out of it but around the bottom of a chicken coop to keep the deep litter in I don't see a problem with it (except the cost)
Click to expand...

In this design, the skids bear the weight of the structure.

Renovating an old garden shed into a coop