When do roosters grow their spurs?
How can you take care of them to prevent injury and difficulty walking?

I saw a video of someone twisting off a spur, does it hurt the rooster? (I didn't have the guts to watch..)

My boys are 3 months old

My big New Hampshire boy Rusty (RIP) eventually grew some fairly large spurs--I think he was 2 or so before they became an issue, cutting into the hens backs. I wound up getting a set of dog nail clippers, getting Rusty off the perch after dark, and bringing him into the house for a quick trim. Just held him in my lap on his back, and cut the spur back. They have a 'quick' like a dog's toenail, so if cut too short the spur will bleed. Rusty's spurs were pale in color so I could kind of see the quick. After cutting straight across, I used the clippers to bevel the edge of the cut so it wasn't a hard edge there. Probably took 2-3 minutes per spur. Can't say he liked it, but he got used to it.

I had to trim him about every 2-4 weeks--he'd find a rock or something to rub against and start sharpening his spurs again (after all, they're what a roo uses to defend his harem from being taken over by another rooster).


I'm now having to do the same with my 10 year old hen as she's grown a pair of inch long and rather sharp spurs herself.

It'll feel awkward at first--everything does the first time around--and you'll hit the quick once or twice (I sure did), but you'll do fine.

Thanks for the pointers. I am in a similar situation- too scared of hurting The General to trim his spurs, but I'm working up the courage. He flogged me good for the first time in almost 4 years. I didn't even see it coming.

I know this is an old thread, but I found this video that you might find helpful. 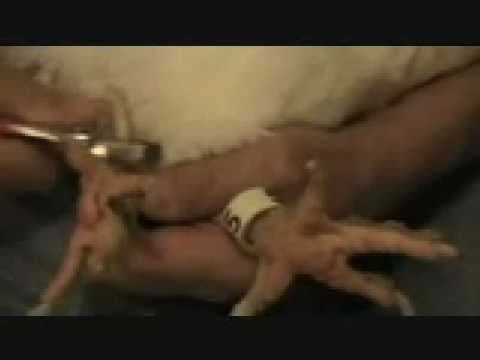