I'm very sorry for your loss.

Agree with others, salpingitis, I've lost several to it. The digestive issues were most likely directly related. Once it's advanced the digestion often slows or stops and the crop does not empty. I lost one this week to it.

Very sorry for your loss.

CoffeeintheCoop said:
The next photo shows some pellets of fecal matter that I found in Goldie's intestines. These are small but very hard. Very different than all of the other objects found inside her body. In other portions of the intestines, there was wet, watery feces. But in one section, I found these pellets. I wish I could tell you more about what portion of the intestines it was, but I am not sure.
Click to expand...

This looks like cecal poop (from the ceca) to me, and I have seen this before in one of mine. Not positive, but I think that dehydration can cause this. 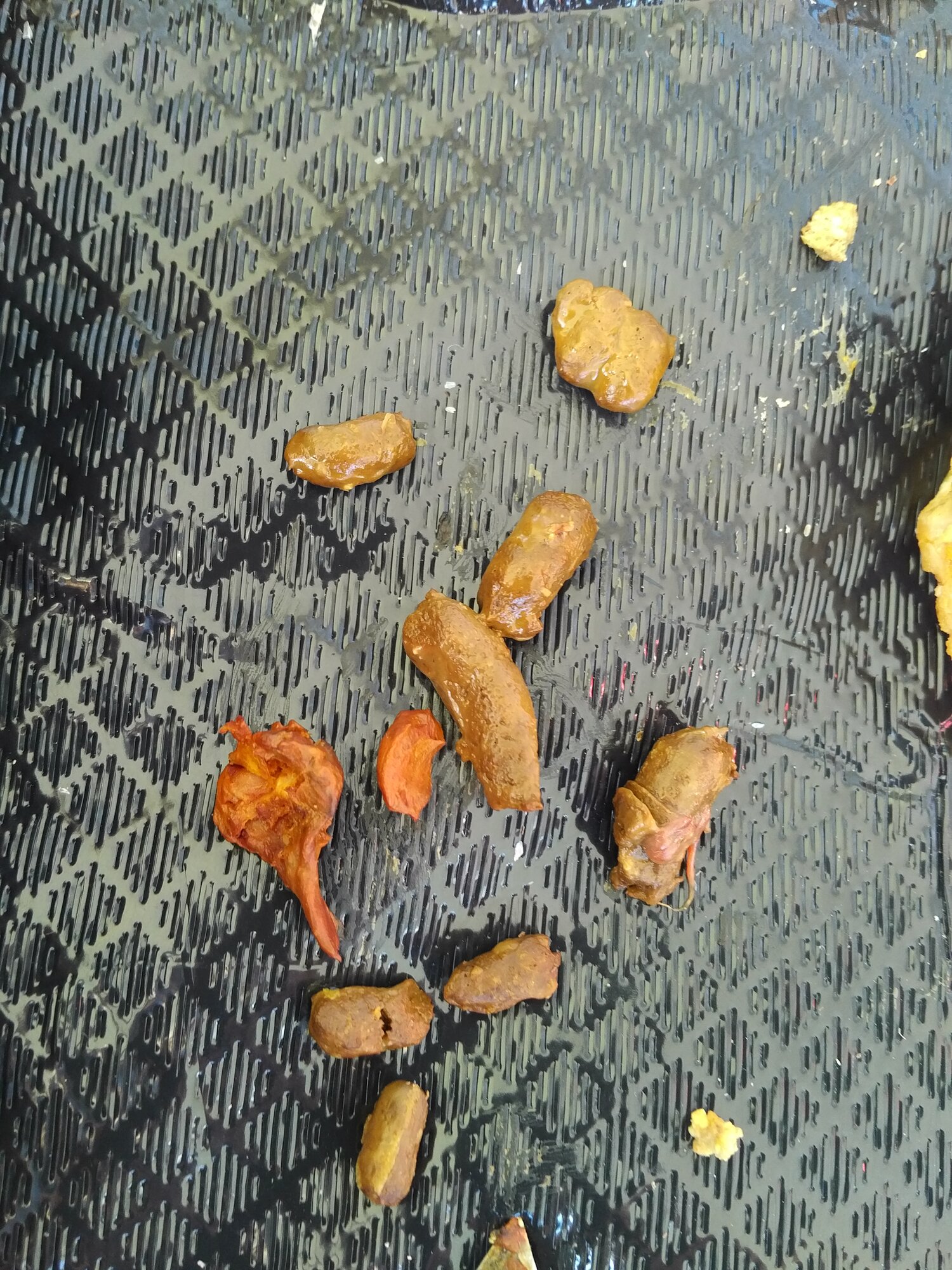 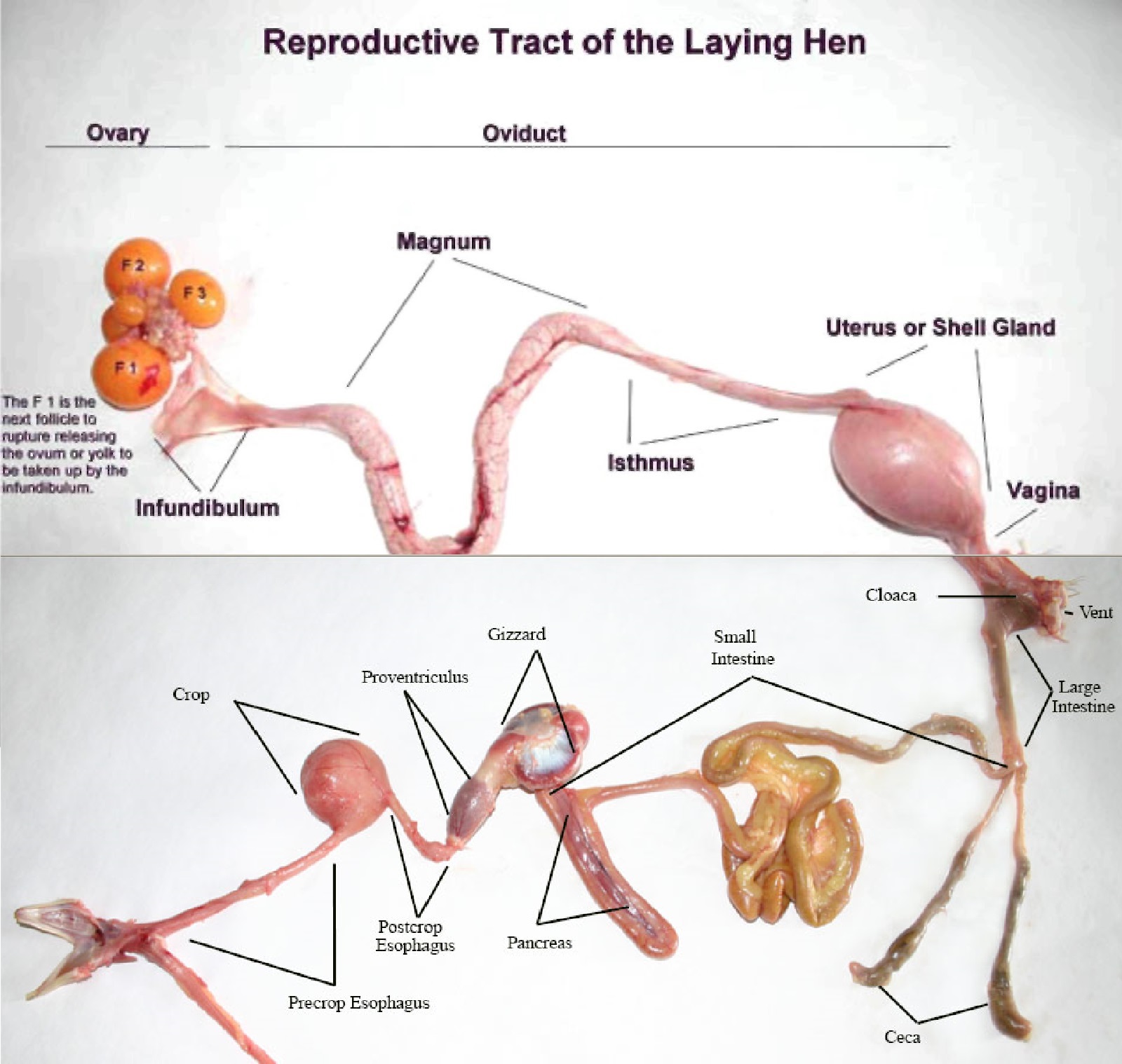 CoffeeintheCoop said:
The fourth image shows the hard-boiled eggs we extracted from what I think is the oviduct (?). They were inside a fairly substantial tube that I could believe was their proper location. But they apparently were malformed, stuck and they just cooked inside her body.
View attachment 1957253
Click to expand...

This is definitive, and is a very, very abnormal looking oviduct. The inside and the outside should be approximately the same color, and should definitely not be thick. The yellow layers in the lumen indicate pretty severe and chronic inflammation. I thik what you are seeing is not necessarily yolk, but fibrinous material from chronic inflammation. I hope this helps put your mind at ease, salpingitis is a tough thing to diagnose and treat, and treatment is very often unrewarding by the time she shows clinical signs. Sorry for your loss, and thanks for sharing your necropsy photos with us.
C 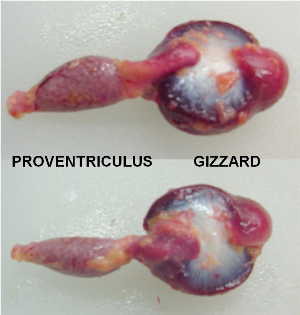 And is slightly larger than a golf ball.
If you didn't pull them out of it, you don't have gizzard stones. I don't have any idea what else they could be. Do chickens get kidney stones?

OOooh, thank you for including this image! I DID believe that I was finding the proventriculus and gizzard immediately next to each other, as this shows. Like the crop, they, too were filled with the same combination of food and no bad odor. I do THINK the stones I circled were found inside one or the other stomach organs, but unless people can see what is on the photo, I can't swear more than that. I don't think I located and removed the kidneys and if I saw them, I didn't realize it.

That is what makes me think your chicken didn't have any crop problems other than those caused by being already weakened.

Many opinions converge on the diagnosis and this same conclusion... it is "good" to know. Next time, we will try to end the suffering earlier.

Thanks so much for the replies!
Click to expand...

Eggcessive said:
Welcome to BYC, and sorry about losing your hen. Kudos to you for doing the necropsy.

Thanks so much. I am really glad we did the necropsy. It wasn't as difficult as I thought it would be.

The bright yellow material throughout her body that you thought was broken egg is fat. Wow! There was SO little of it. :-(

The large cooked egg masses are indeed from internal laying. The tiny rock-like things probably are rocks or grit, but sort of look like seeds (milo?) that is in some scratch grains and birdseed. There is something called cecal cores that may be seen in coccidiosis sometimes, but I may be way off.

Did you get any good pics of the liver? Or the heart? Sometimes that can give clues on diseases.
No, I didn't.... I can say that the liver looked normal.

Was there any yellow fluid that came out of the abdomen when the abdomen was opened?
No, but her body froze prior to the necropsy (?) but I saw nothing that I would interpret as being yellow fluid.

The slow crop was probably due to the the internal laying egg masses which slowed down digestion due to the pressure on her organs. This is very common in laying hens.
Click to expand...

Wyorp Rock said:
I see a lot of corn in the crop and gizzard.

My dad kept sneaking out there and feeding her corn against my recommendation-- but they ARE his chickens. (Sigh). He wanted her to be happy and it was one of the few things she would eat those last few days (other than what I syringe-fed her). I am glad that she didn't have sour crop and it didn't directly contribute to any problems. They do get corn every single day as a treat.

To me, the hen had Salpingitis which is an inflammation of the oviduct. Without being able to pass all that lash material, her system shut down. Inflammation and infection presses on the other organs/over taxes them causing them to slowly shut down or have improper function. Reproductive disorders and crop issues I have found go hand in hand.
"Internal Laying" where a fully formed egg is found in the abdomen might be a bit unusual, but I would not say it's rare. There are many reproductive problems that a hen can suffer from and sadly it's hard to know which one until a necropsy is performed.

I really appreciate this distinction. I have been confused by this difference ever since I started reading about "internal laying". In my attempts to learn about internal laying, I had not run across a reference to Salpingitis until this thread.

Here's a post I made a few years back, I really need to update some info, but in the post there's a fair comparison to links about some of the reproductive issues that affect laying hens. https://www.backyardchickens.com/threads/swollen-abdomen-lethargic-and-weak-hen.428026/page-2#post-18942573
Click to expand...

I look forward to reading that. We have another hen right now who I think is unwell in some way, very general signs, nothing distinctive... but everyone has been wormed.
C

Kiki said:
I am sorry for your loss.
Good job on the necropsy.


What exactly do you feed your birds?
Click to expand...

The chickens are fed a 17% organic complete layer feed and a smaller amount of scratch. I don't make the decisions or buy the feed, but this second food is called scratch around here, and it looks like a dry seed mixture, with ground corn as a major component. I think it is fed more as a treat. Then, my dad gives them a cup or two of thawed-out frozen corn. He just thinks, "people feed "livestock" CORN, and of course, the hens LOVE it." During warmer months he chops up romaine lettuce as a treat every afternoon. Since Goldie died, he has backed off the corn a bit, and they stopped enjoying the lettuce once the weather got cold. They get dried mealworms, but not every day. During the time Goldie was sick, I started offering more variety in treats (grapes, shredded carrots, squash, apples, cooked grains like barley, broccoli, etc) but I have stopped doing most of that. The vet who saw Goldie stated that she was deficient in calcium, so I have been drying out egg shells and also feeding them hard boiled egg for about a week now. Next task is to figure out how to get more calcium into them. Their eggs are thin-shelled. They have oyster shell available at all times. The water gets ACV in it.
C

CoffeeintheCoop said:
I look forward to reading that. We have another hen right now who I think is unwell in some way, very general signs, nothing distinctive... but everyone has been wormed.
Click to expand...

I replied INSIDE the quotes-- didn't realize that it is difficult to find those sentences after it is posted!
C

Agree with others, salpingitis, I've lost several to it. The digestive issues were most likely directly related. Once it's advanced the digestion often slows or stops and the crop does not empty. I lost one this week to it.
Click to expand...

It is so very helpful to see the consensus as you summarized here. Thank you. Would you say, as a general rule, if a hen starts to slowly waste away, with no distinctive symptoms, and then she stops wanting to eat or enjoy life, this is a strong possible cause, and euthanasia is the best course to take? We took Goldie to a vet, and he totally mis-diagnosed her and sent us on a hunt for worm medication... On my way to trying to diagnose Goldie, I didn't see a lot of possible alternative diagnoses that could be successfully treated. Sour or impacted crops can be treated, if that is the primary trouble. But this slow wasting while a bird continues to eat well (at first) seems like a dead end, no pun intended...
C